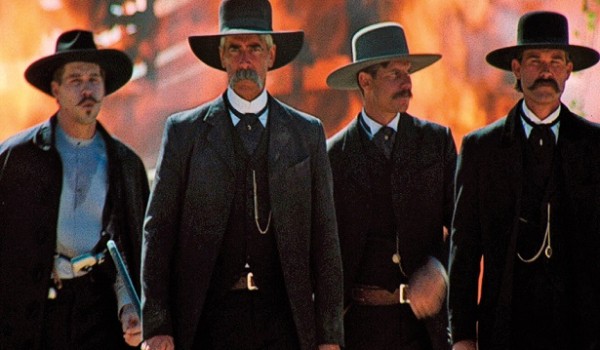 Tombstone (1993) has been one of those films I managed to not see and always elicits the “OMG HOW CAN YOU NOT HAVE SEEN THAT???” reaction from my friends. So I finally got around to watching it the other day. Before I get into the costuming good stuff, I have to say that I am not a fan of Westerns, so that probably explains why I had dragged my feet in watching the film even when, like, 90% of my friend group loves it and quotes it constantly.

“Meh,” I thought to myself. “Probably just more dusty cowboy shit and vaguely ye olde timey women’s costumes that look like they were bought from the Leg Avenue rack at the local Wal-Mart.”

Oh, how wrong I was! Especially about the costuming. Story-telling and casting aside (both of which are great), the costumes by designer Joseph Porro, are fabulous. Turns out, 1993 was a year that everybody was making Westerns, so all the costume shops were all rented out, as Porro relates on his Pinterest board dedicated to the costumes he designed for Tombstone:

Shot in Tuscon Arizona and surroundings in 1993. One of the toughest jobs I ever worked on. Wyatt Earp and Geronimo were shooting at the same time and so there was nothing left to rent. I had no choice but to make everything for the leads and the Cowboys. I rented Victorian pieces for my background extras in London and literally designed a full line of western wear for the show. Because of this the show had a unique look. I still get lots of fan mail even to this day.

Consider this post my fan mail to him, especially for Josie’s white dress. My jaw dropped when I saw this scene. Interior Scene with a Lady in a White Dress, by Paul Gustav Fischer.

The “sisters” (the wives of the Earp brothers) also had some lovely costumes, especially the mourning gowns. I love the one worn by Dana Wheeler-Nicholson with its black lace on lavender border. In general, the sisters’ gowns are light colored to visually set them apart from the other two main female characters, Josie the actress, and Big Nose Kate, a Hungarian prostitute who is Doc Holliday’s girlfriend. Joanna Pacula, as Kate (lacking the big nose, but hey, it’s Hollywood). This is her day wear look, which might just be a black jacket over the evening bodice she’s usually seen wearing. I really liked how, as probably the poorest of the female characters in the film, there seems to be some mix ‘n match with her wardrobe with two evening bodices and a day bodice, worn with, as far as I can tell, the same skirts. She’s also briefly shown in a red gown in the same scene with Josie’s white gown. “Why Kate, you’re not wearing a bustle! How lewd…” And speaking of Doc Holiday, there’s an archived auction site with the costume worn by Val Kilmer…

I highly suggest checking out Joseph Porro’s Pinterest board for loads more images from Tombstone, as well as all the other films he’s worked on, too.

If you could be anyone from Tombstone, why would you choose Doc Holiday?