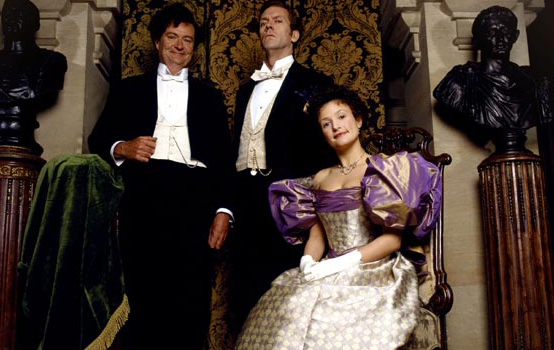 The Young Visiters (2003) has been on my watch list for years, but I could never find a decent copy of it without buying the DVD, which mostly smacks of effort these days. I’m not sure if I even know where the remote is to my Blu-ray player, I haven’t used it in so long. However, the gods have smiled upon all of us, because the full movie is available, for free, on YouTube, AND THE QUALITY DOESN’T SUCK! It’s like the Frock Flicks equivalent of winning the lottery.

The film is based on the novel The Young Visiters, or Mister Salteena’s Plan, which was written by Daisy Ashford when she was nine-years-old and published about 20 years later in 1919, complete with all the childish misspellings. I have only skimmed the book, but the plot couldn’t be more straightforward: Alfred Salteena (Jim Broadbent) is a socially ambitious “elderly” 42-year-old iron monger who has attained some level of success in his life, but he yearns to rub elbows with the upper classes. On a train ride, he encounters Miss Ethel Monticue (played by Lyndsey Marshal) and her mother, discussing their own social ambitions: Ethel is 17 and very keen to climb the social ladder. Alf inflates his own social standing to impress the mother and daughter, and Ethel is quickly dispatched to Mister Salteena’s residence in Dulwich on the pretense that she will then use Alf’s introductions to high society to obtain an advantageous marriage to a lord. Of course, Alf is smitten with Ethel and has no idea that he’s merely a stepping stone on her social climb. By sheer luck, Alf is able to pull some connections for an invite to the vast country estate of his acquaintance, Lord Bernard Clark (Hugh Laurie), which sets up the central love triangle of the film. Bill Nighy as Lord Clincham rounds out the main cast, with supporting roles played by other familiar faces such as Sophie Thompson, Sally Hawkins, and Geoffrey Palmer.

The costumes are incredibly well done, designed by Charlotte Holdich, who Frock Flicks readers may know from her work on Kate Mosse’s Labyrinth. Ethel wears a variety of lovely 1890s frocks that are all gorgeous, but here are some of the more notable ones. 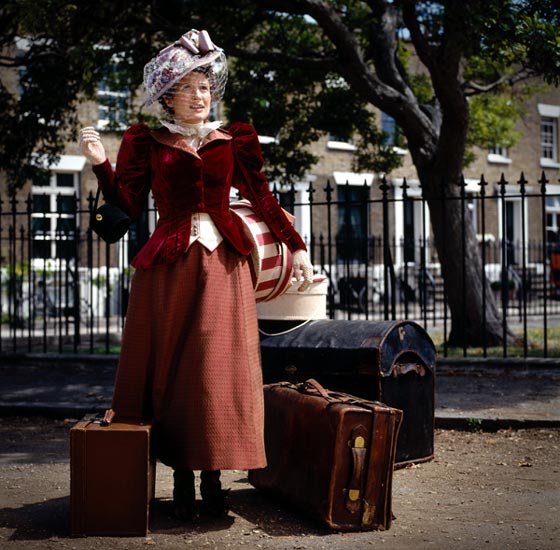 Ethel first arrives at Mister Salteena’s home in a traveling costume with a red velvet jacket. A notable feature throughout the film is that her skirts are almost always shown to be several inches shorter than all the other ladies, which likely is referencing the fact that she’s had a growth spurt. She even points out that the sleeves on her bodice have “grown quite short.” 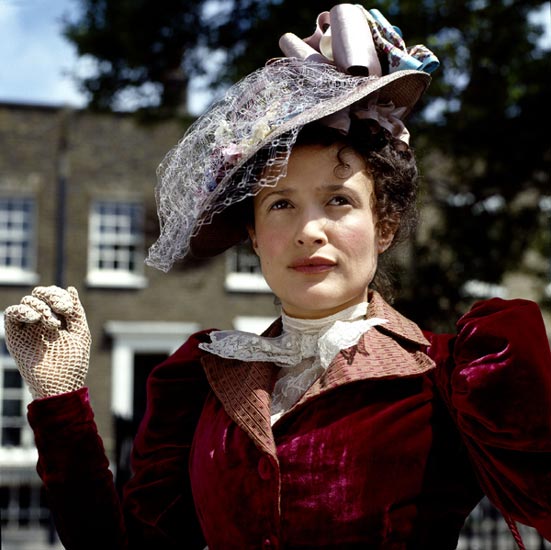 Ethel has some fantastic headgear in this film. I tried to find information on who designed the hats, but couldn’t turn anything up. But they are wonderful! 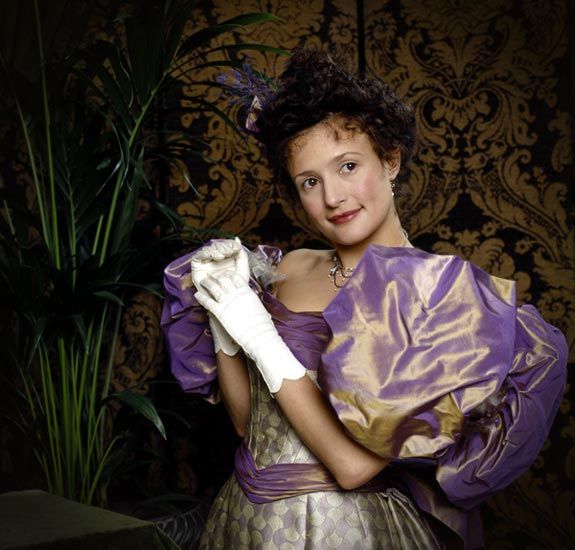 I loved this evening gown that Ethel wears to dinner with Lord Clark after the arrive at his estate. It’s not so obvious in this photo, but she’s almost popping out of the top of her bodice, which again points to the fact that while her clothes are nice, her family can’t afford to have her outfitted in new gowns that fit her. 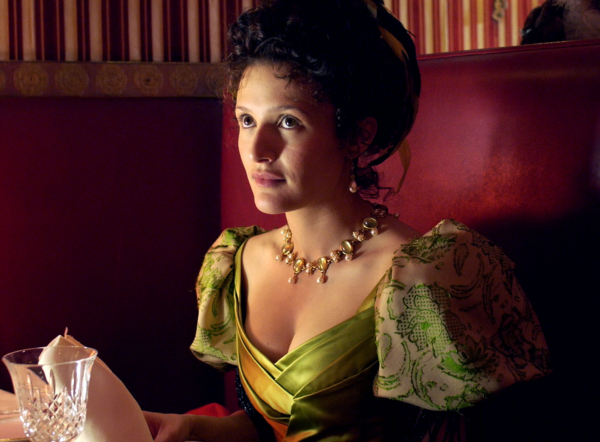 By the time that Ethel and Bernard run off to London for some diversion while Alf is off learning how to become a gentleman with Lord Clincham, she’s in better fitted clothing. Bernard mentions buying her a new dress at one point, so we can assume she’s had several new outfits tailored to her, courtesy of Bernard. 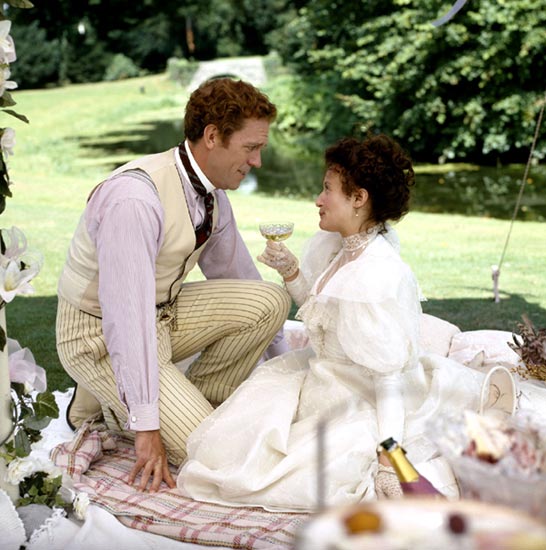 The white dress that Bernard mentions buying for her to wear on a romantic river journey to a secluded picnic spot.

As usual, the men’s costumes aren’t as interesting as the women’s, but they are equally well done: 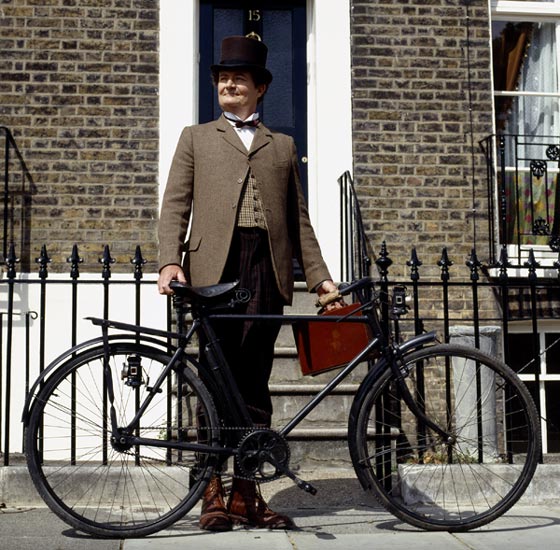 Alf’s suits are always neat, but lack refinement. His trouser legs are also habitually too short, which adds to the overall awkwardness of his attempts to blend in with the upper crust. 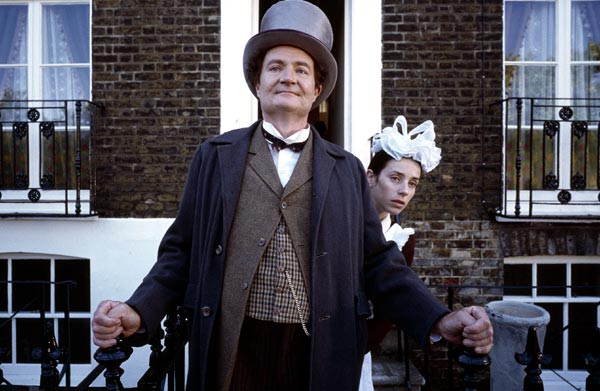 Bernard sends Alf an almost cartoonishly purple top hat as a gift to wear when he arrives at Bernard’s country estate. That’s Sally Hawkins as Alf’s maid, Rosalind, peeking out behind him. She has some of the most delightful headgear in the entire film. 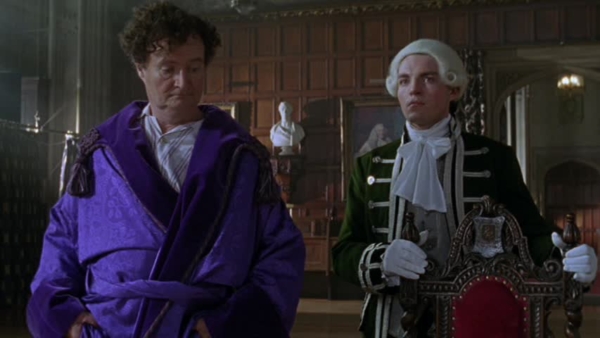 Alas, as hard as Alf tries, he almost always chooses the most wrong option for every situation, such as wearing this outlandish robe over his disheveled pajamas to breakfast with his host, Bernard, and Ethel. Yes, that is also Tom Burke as Bernard’s valet, Horace. 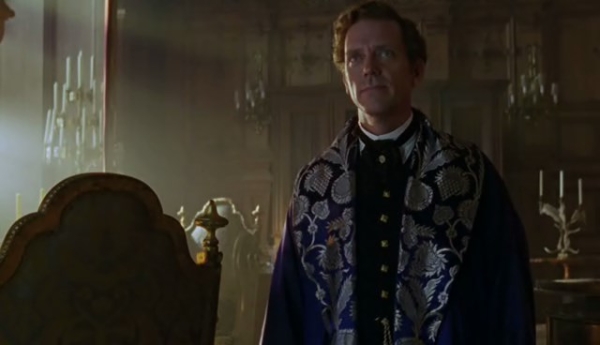 Most of Bernard’s outfits are nice, but boring menswear. Except for this housecoat he wears to receive his guests when they first arrive, which is absolutely gorgeous. 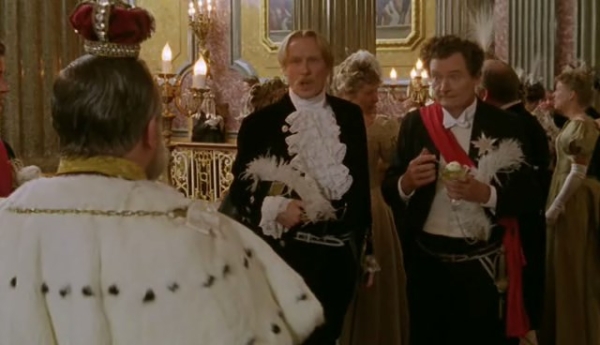 Lord Clitham, introducing Alf to the Prince of “Whales” (a nod to Ashford’s childish misspelling in the book). Alf is pretending to be Lord Hyssops, but is immediately called out as a fraud by the Prince. However, he decides to actually grant Alf the title and put him in the employ of the Royal Household. So, maybe things aren’t all bad for poor old Alfie!

Well, you’ll have to watch the movie to know how it all ends.

Have you seen The Young Visiters (2003)? Tell us about it in the comments!