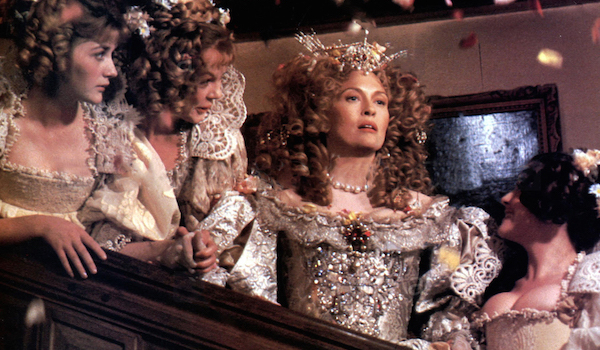 The Wicked Lady (1983) may be one of the more hilarious historical costume movies ever. It’s a remake of a 1945 film, both based on a novel set in the 17th century. Faye Dunaway stars as the titular “wicked lady,” a scheming aristocrat who steals her sister’s true love for his money, gets bored, and becomes a highway robber. It’s definitely playing for camp, but also some has unintentionally bad performances, cheesy men … and stunning costumes!

Caroline is the sweet and pure ward (?) of elderly Sir Ralph, and she lurves him. They two get engaged — oh happy day! 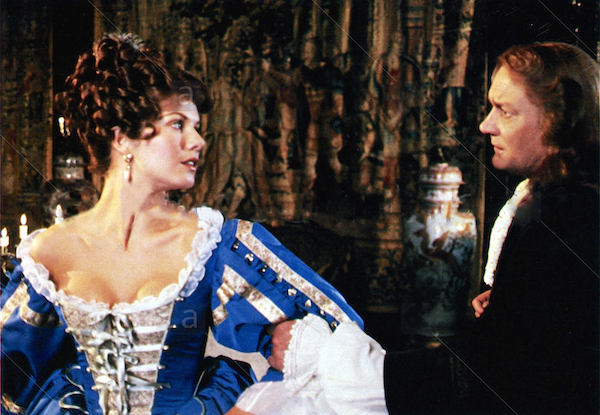 But Caroline invites her sister Barbara to be her bridesmaid, and Barbara is WICKED. Despite being dressed like the king’s mistress, she plays the blushing naive girl in order to seduce Sir Ralph. This is hard to swallow, given that actress Faye Dunaway looks great but also mature (she was 41!), and that Barbara is not one to shy away from a big dress: 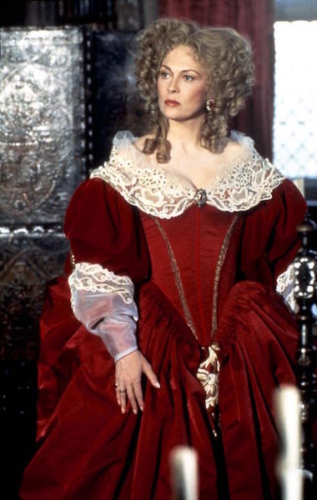 “Sorry, Caroline, I’m old enough to be your mother, but nobody can compete with this dress. Suck it.”

Sir Ralph (played by Denholm Eliot, which confuses me, because he is forever the kindly Mr. Emerson from A Room With a View to me) is a nitwit, because he falls for Barbara’s very transparent ploys. 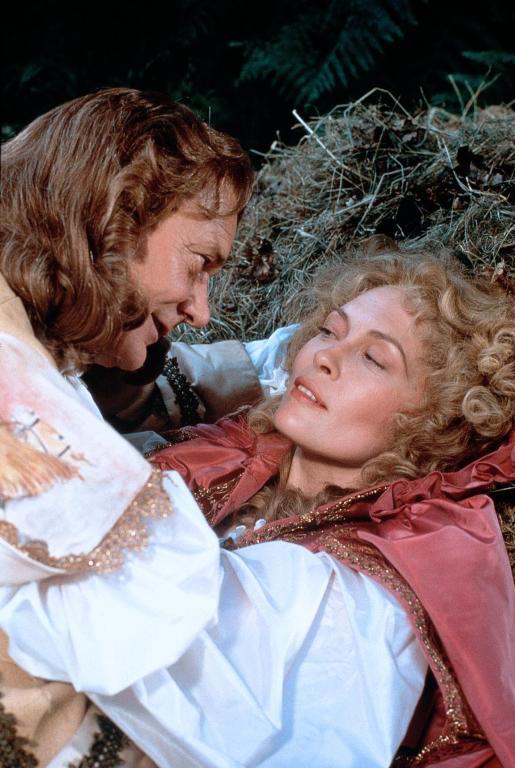 Actually a semi-age appropriate pairing! How can Barbara resist that hair?

They get married, and Barbara pulls NO PUNCHES when it comes to her wedding dress: 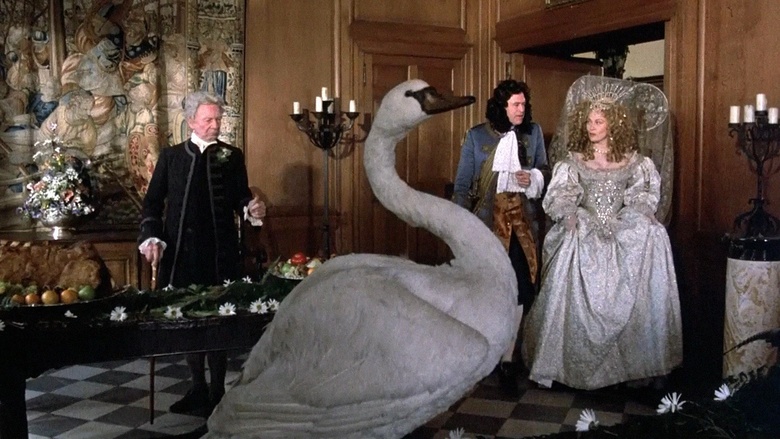 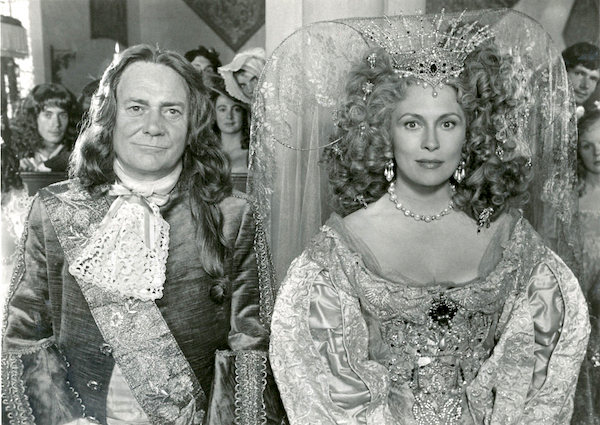 “This is my casual Friday wedding dress.”

Caroline, of course, just stands by nobly without a peep, looking tragic: 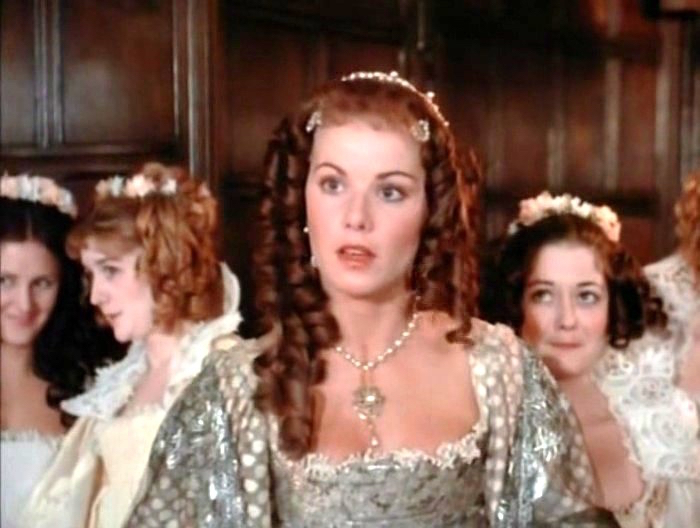 “My commitment to Sparkle Motion clearly doesn’t compare to Barbara’s.”

During the wedding reception, Barbara meets Kit Locksby, who she thinks is swoon-worthy, and I think has very bad hair and sweaty upper lip. Who cares that she just got married, she decides Kit is The One: 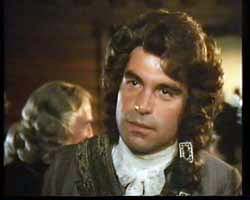 “Milady [insert obsequious flourish] — my feathery bangs are at your disposal.” 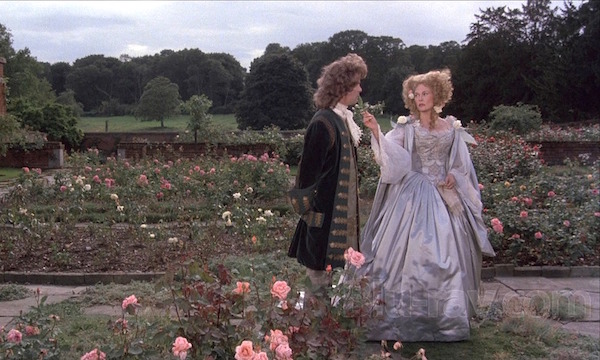 “If I give you this flower, can I run my fingers through your 1970s rocker hair?”

But, of course, she just married Sir Ralph! Barbara immediately demands separate rooms and refuses to sleep with her husband. Ralph continues to be a nitwit, given that non-consummation would be GROUNDS FOR AN ANNULMENT. 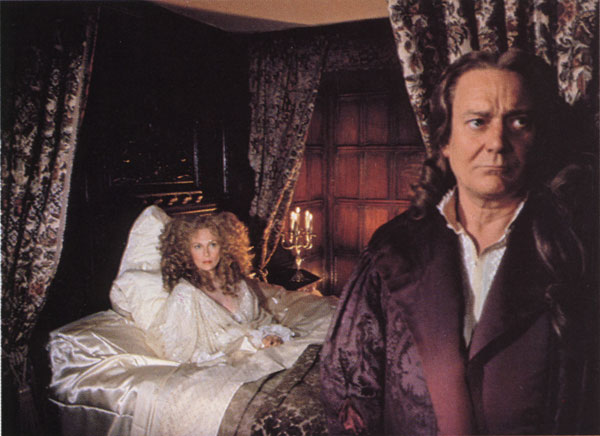 COME ON, RALPH. IT’S NOT ROCKET SCIENCE. I realize that the spaniel ear hair is hard to resist.

Caroline continues to live with them, because she’s worried about Ralph.

Barbara is WICKED, so she gets bored! Rumors abound about a highwayman in the area, which gives Barbara the idea to do some robbing herself. She starts sneaking out at night, dressed as a man and in disguise, and robs coaches. 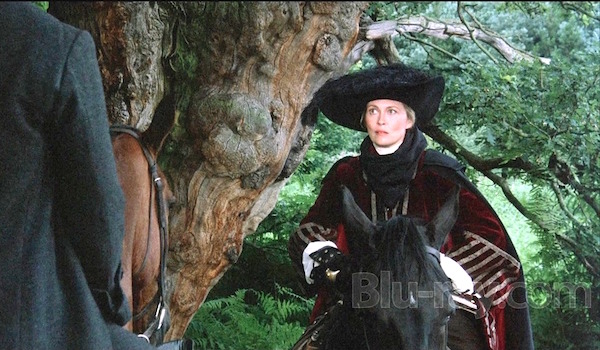 Just the average hobby for your well-to-do, stuck-in-the-country, 17th-century lady.

Eventually, she meets up with the original highwayman, Jerry Jackson, and the two start robbing and shagging together. 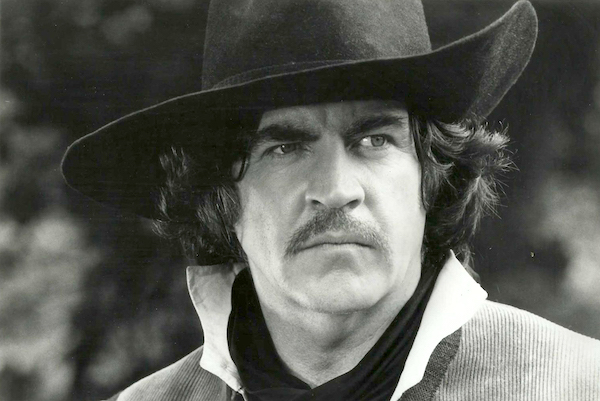 I hate that mustache shape. Just makes the wearer look like Droopy Dog. 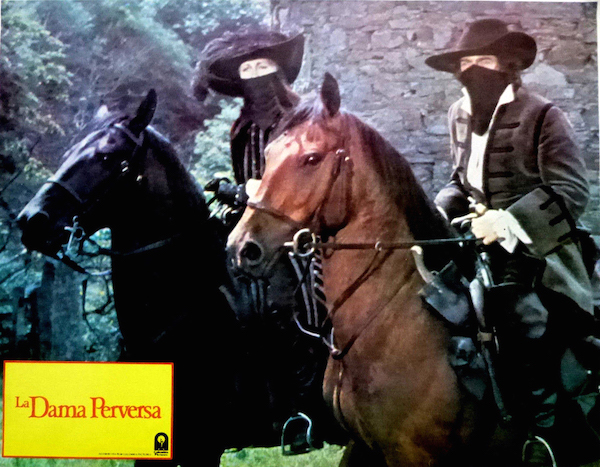 This sounds somewhat promising, but the shagging mostly consists of pressy-mouth kissing and is very limp: 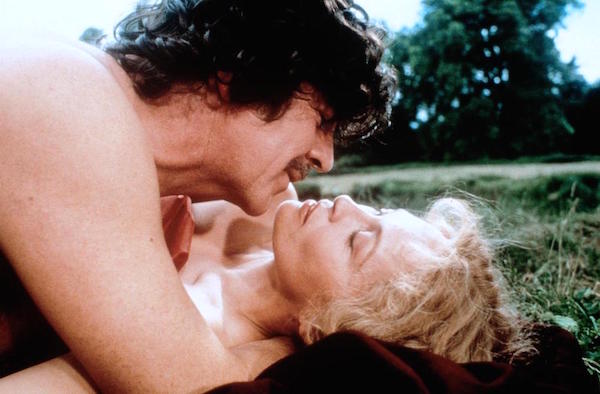 “Oh Jerry. Mash thy face against mine, and I shall be powerless to resist thy manliness.” 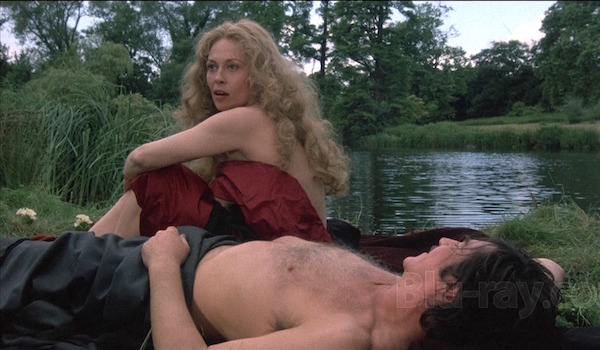 Manly, 17th-century chestal pluft! Convenient that we have lots of sheets available for our lakeside shag.

John Gielgud plays the randomly Bible-thumping, judgy servant who is suspicious of Barbara. He finally figures out what’s she’s been up to (robbing, at least), and she convinces him she’s Ultra Repentant and wants him to help her find her way back to god. 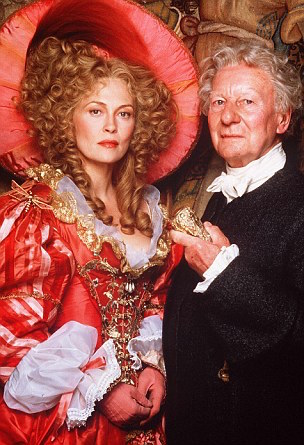 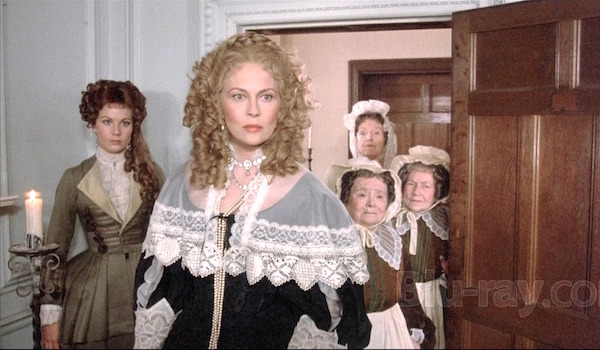 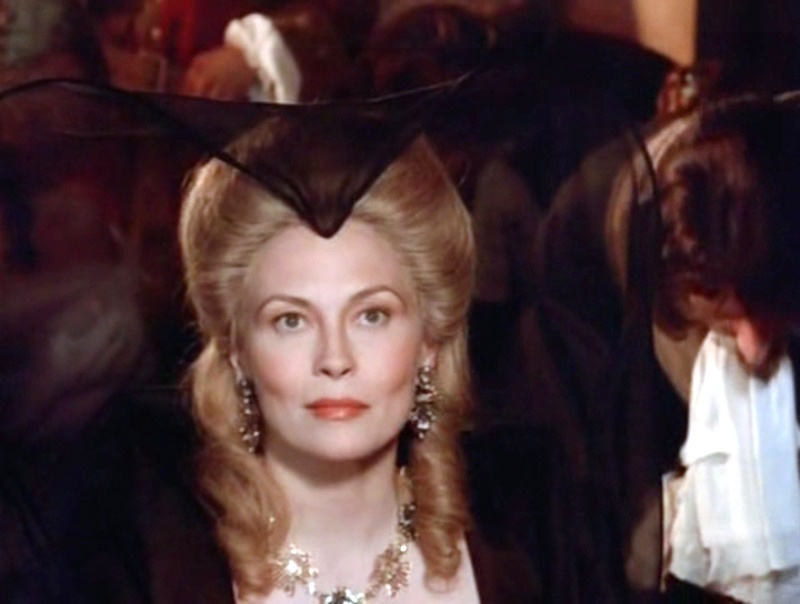 This is Barbara’s “repentant sinner” look. Which you’d be an idiot to buy.

He buys it, randomly, and then she starts poisoning him. To get him out of the way, she eventually smothers him with a pillow because the poison hasn’t worked fast enough: 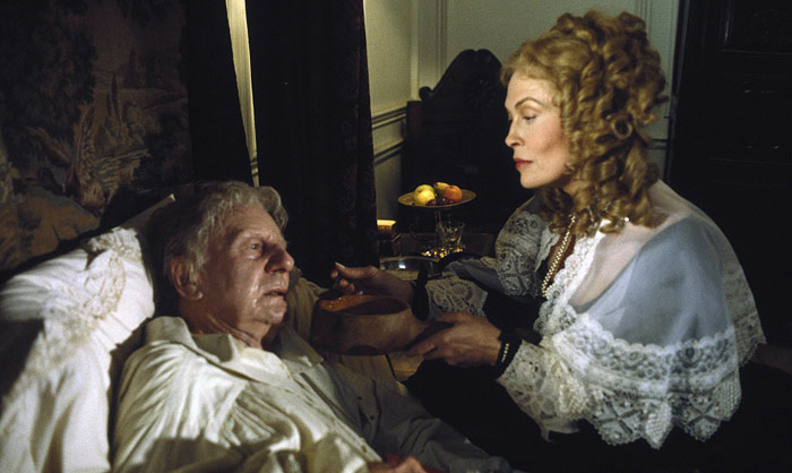 EAT THE BROTH, SERVANTMAN. AND SHUDDUP.

Eventually Caroline grows a spine and moves to London. There, she hooks up with Kit, who feels sorry for her, which leads to tender shagging in front of the fire: 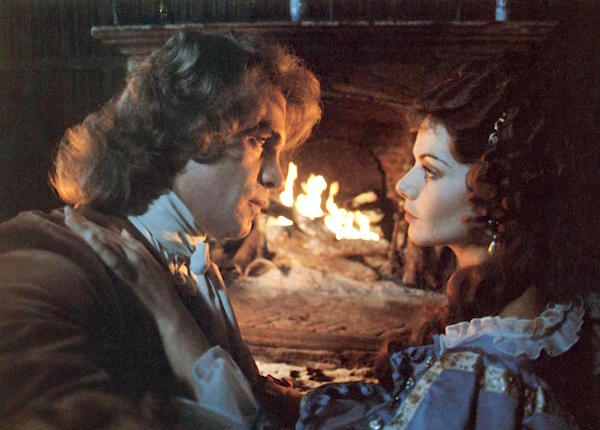 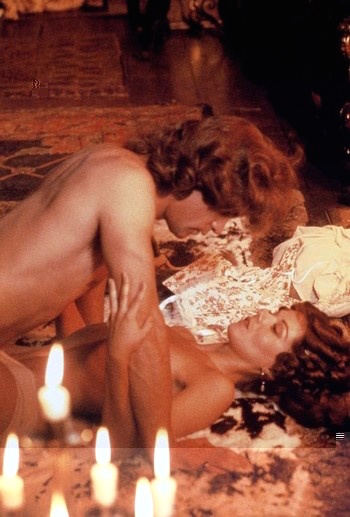 At some point along the way, Barbara meets the in-laws, during which her fabulous hair disappears in favor of some faux-Gibson Girl do: 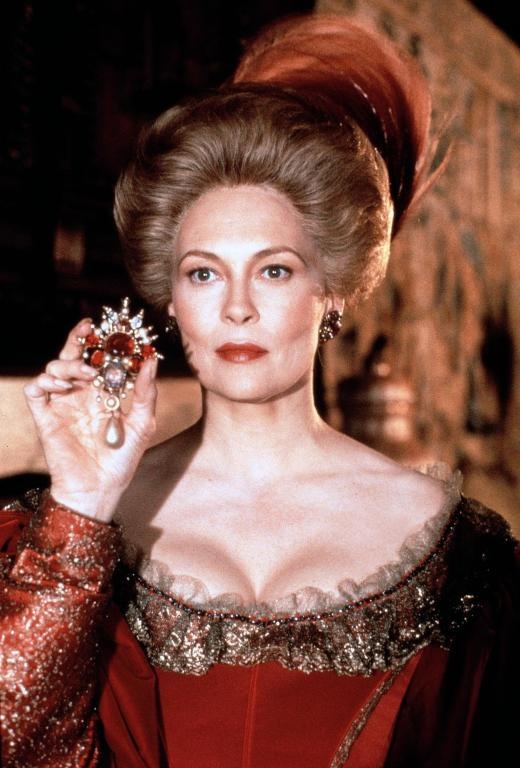 “You will look at the jewel. You are getting sleepy. You do not notice my Aquanetted 1960s hairstyle.” 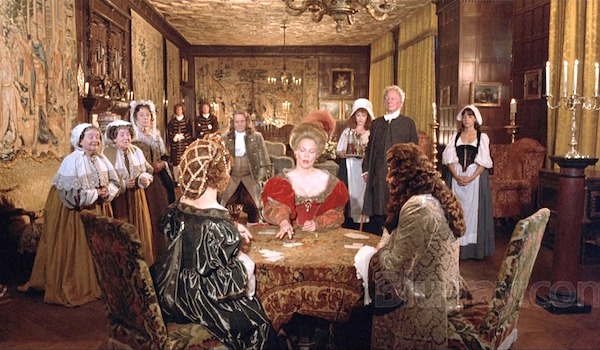 Not terribly sure about that gold net on sister-in-law, but whatever. You just can’t quibble when Faye Dunaway is pulling out all the stops!

Barbara bursts in on her robber lover, Jerry, with another woman — played by Marina Sirtis,  Deanna Troi from Star Trek: the Next Generation: 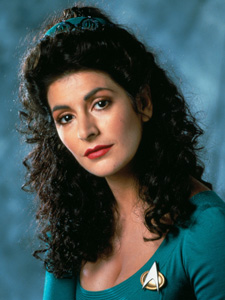 FEEEEEElings! Nothing more than FEEEELINGS!

In retaliation, Barbara turns in Jerry as the highwayman. He’s going to be hanged, and because she’s terrified he’ll name her as his accomplice, she turns up at his hanging: 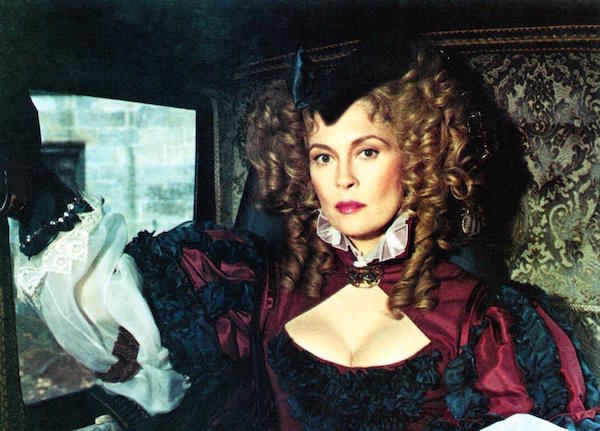 “I wore my most subtle, fade-into-the-woodwork outfit so no one would notice me. It’s totally working.” 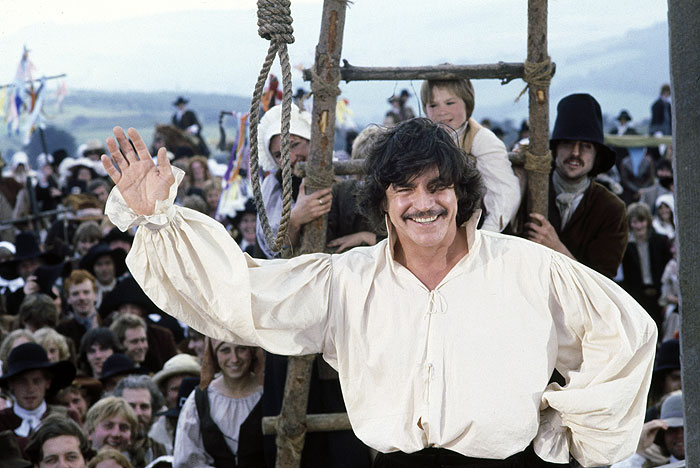 When Barbara sees The Feeler at the hanging, there ensues the campiest, most ridiculous bitch fight EVER. Barbara graps a WHIP and conveniently manages to whip The Feeler’s top off, so they have a 15-minute-ish fight while Marina is topless, boobs flying. Meanwhile Jerry uses the commotion to escape. 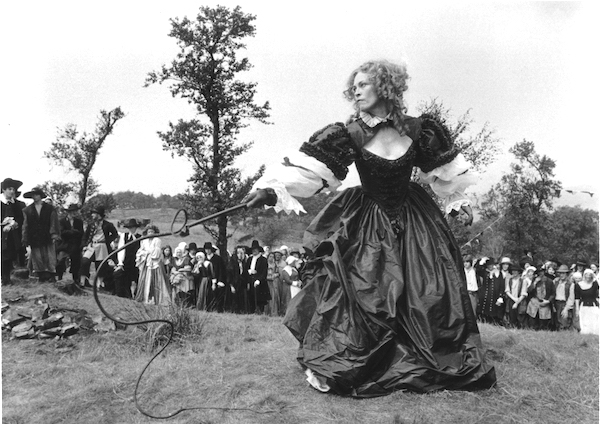 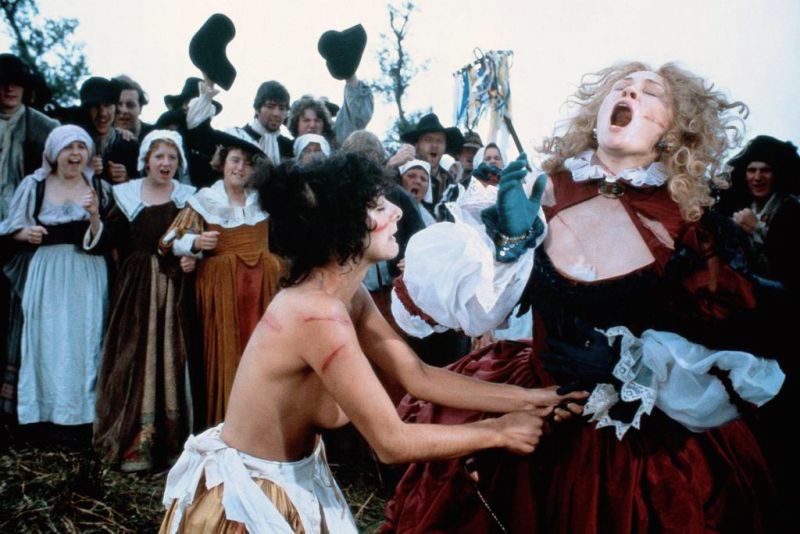 Possibly the best, most ludicrous fight scene ever committed to film.

Barbara decides to get rid of Ralph so she can run off with Kit. She dresses up as a highwayman again and tries to rob his coach, hoping to shoot him in the process (and pin it on Jerry). Instead, SHE gets shot. 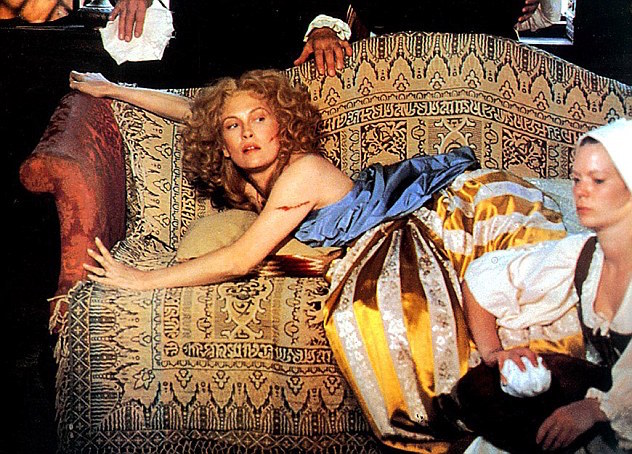 “Don’t worry about me. I’ll just bleed to death here.”

Dying, she tells Kit everything. Instead of lovingly smooching her with the limp-fish kisses she always dreamed up, he’s horrified and leaves her to die. With Barbara out of the way, Ralph and Caroline can have the lukewarm romance they always hoped for!