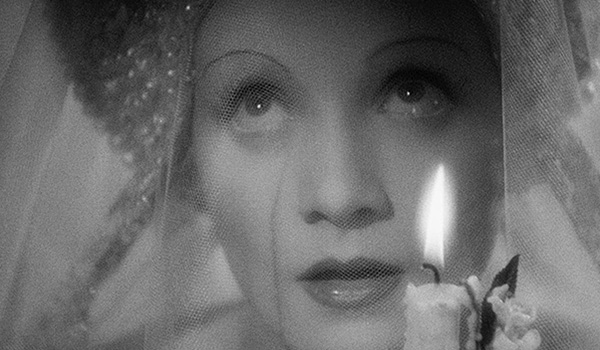 Marlene Dietrich died on May 6, 1992, so this Throwback Thursday is in her honor! The Scarlet Empress (1934) was one of the last collaborations between Dietrich and director Josef von Sternberg. It’s not so much a historical drama as a highly stylized indulgence in the grotesque and spectacular. The sets are grand, the costumes are flashy, the lighting is dramatic, this flick is all about the visuals. Don’t go looking for historical facts or dramatic nuance — just sit back and let the art wash over you. 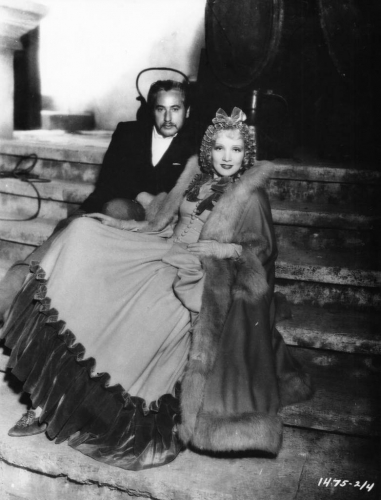 This film more closely resembles silent movies than the “talkies” that had been common for nearly a decade. There’s very little dialogue, and the plot relies on  title cards to move events forward. The acting also has that broad, almost campy feel, that’s closer to silent films than something that relies on snappy banter like The Thin Man or emotional appeal like Imitation of Life, both released in 1934. 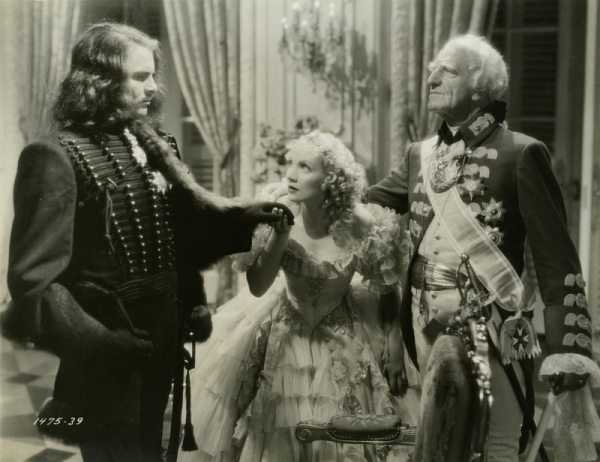 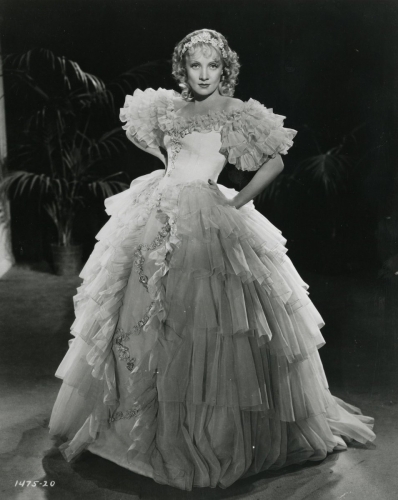 This is the kind of frothy white extravagance “young Sophia” wears at the start of the film.

In The Scarlet Empress, Dietrich begins as an unbelievably naive and innocent Princess Sophia. She arrives at the exaggeratedly decadent Russian court where the older empress renames Sophia as Catherine, and the young girl is married off to the imbecilic Grand Duke Peter. 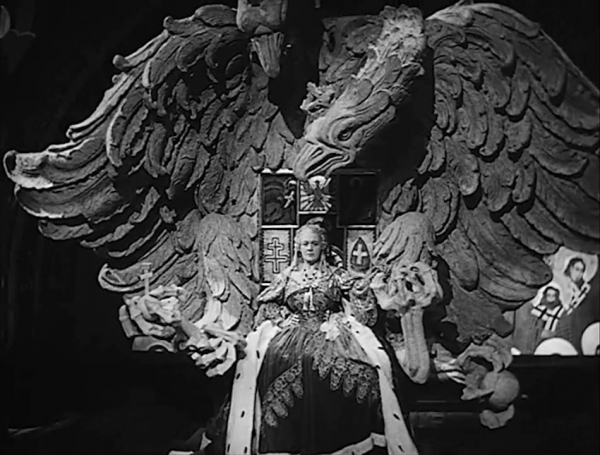 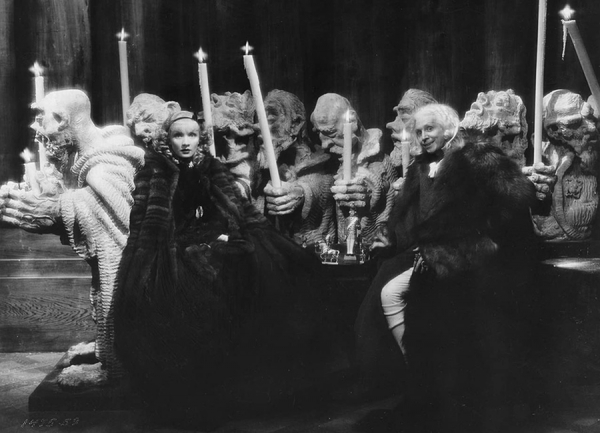 Alexei is easy on the eyes, I’ll give him that. 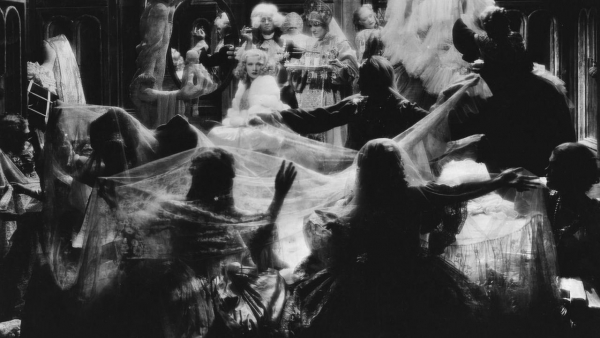 The wedding veil scene is intense, like Catherine is now trapped in a spider’s web. 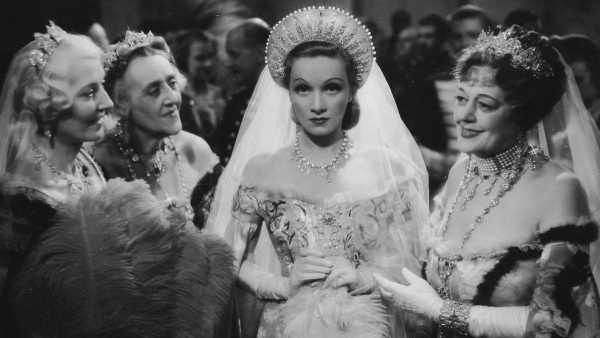 Her wedding ensemble has a tiny nod to traditional Russian clothing.

Meanwhile, the hottie Count Alexei flirts with Catherine, though he’s also bedding the older Empress Elizabeth. In a quick turn, Catherine realizes Alexei already has a lover, so she takes one of her own. And then she’s screwing anything in pants (except her creepy husband, of course). At this point, Dietrich seems more natural as she’s playing a sexually experienced adult woman instead of a virginal teenager. It’s just that the change between the two comes at the drop of a hat, basically. 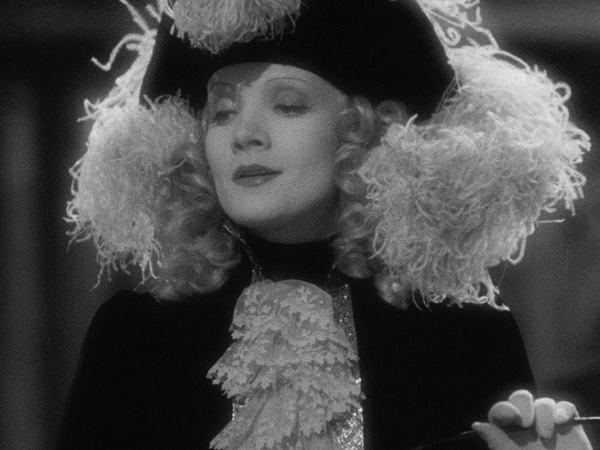 This riding habit is a frothy feather & lace confection on-screen. 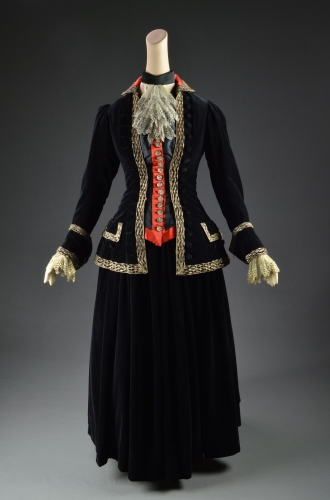 There isn’t much to the story, either as fiction or as history — it’s a vague series of massively staged scenes, as the director said, “a relentless excursion into style.” Most every scene is packed, almost claustrophobically, with things like candles, gargoyles, and icons. Then there’s the lighting, the glorious light and shadow that plays perfectly over Dietrich’s elegant face! The camera loves her, and von Sternberg knows precisely how to capture her on film. 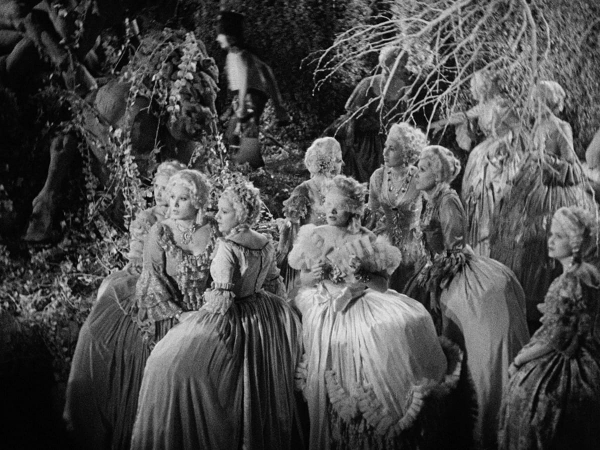 The court ladies wear typical 1930s-does-18th-century gowns. The general court pannier shape is there, but so are back zippers, white wigs, no corsets, & all the standard cliches. 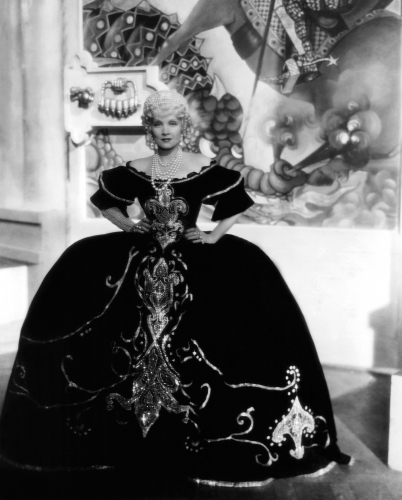 I wonder if this gown was reused in the 1938 Marie Antoinette movie? 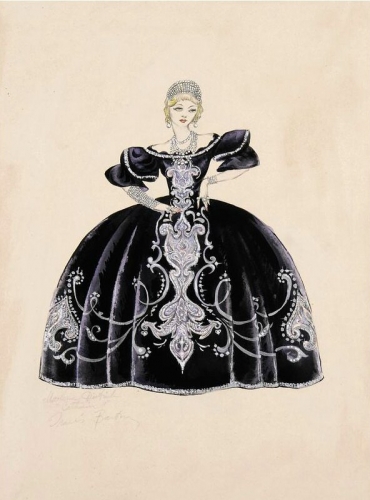 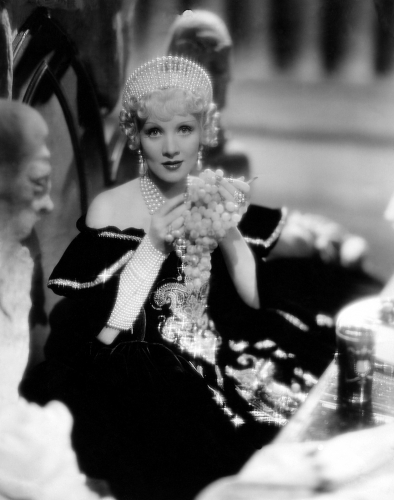 Check out that arm full of pearls! In this scene, she’s giving away jewels as alms for the poor. 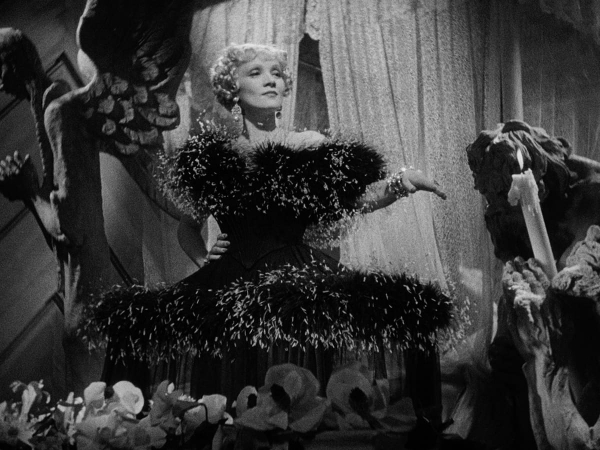 Then there’s this wacky nightie. It has a hooped skirt in sheer black fabric, the sheer top practically falls off her, & only the feathers keep it relatively decent.

The costumes by Travis Banton give a nod, here and there, to 18th-century fashion, but his designs are more interested in conveying opulence, movement, and drama. He’d been working with Marlene Dietrich since her first Hollywood movie, and he helped create her look on film. Banton and Dietrich came up with the idea of he dressing in men’s white tie and tails for Morocco (1930), and here in The Scarlet Empress, Banton gave her another masculine look with a white Hussar’s uniform at the end of the film. 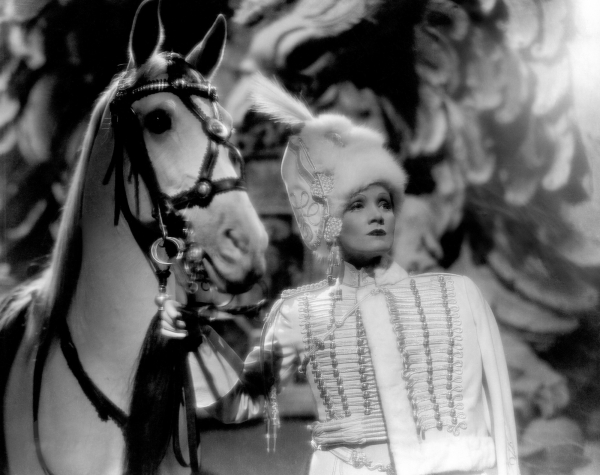 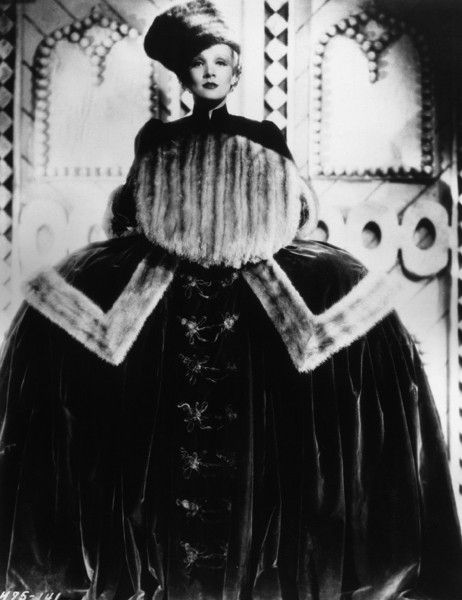 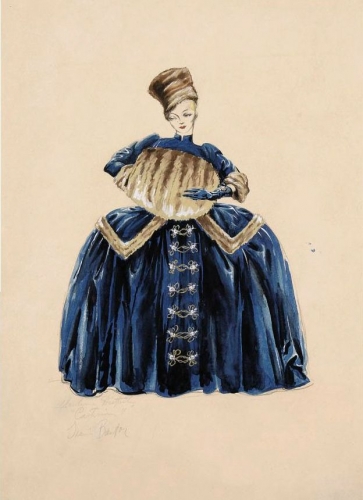 Perhaps the most iconic costume in the film, which I guess really is blue? I’d love to see a color picture of it!

Have you seen The Scarlet Empress? What did you think?