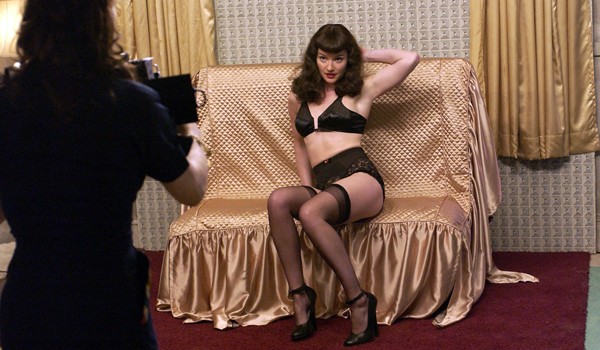 The Notorious Bettie Page (2005) is a surprisingly sweet and innocent-feeling movie about what you might think is a salacious subject: The Queen of Pinups in the 1950s. The story doesn’t seem to whitewash Page’s story or make her over into something she’s not; the filmmakers actually manage to capture a bit of Bettie’s greatest appeal. Even while in incredibly risque and erotic pinup, topless, and bondage photos and movies, Bettie Page displayed a playfulness and frankness that increased her popularity. For example, her famous Playboy centerfold in January 1955 showed her nude except for a Santa cap and winking at the camera. Page said later in life that, “I never thought it was shameful. I felt normal.”

The film begins with Bettie as a teenager and shows a little bit of her home life in Nashville, Tennessee, hinting that she was sexually abused by her father and strangers and also beaten by her husband, a high-school sweetheart. But the movie doesn’t overly dramatize these events and use them to “explain” why Page got into pinup modeling. No sordid connection is drawn, and this isn’t a moralizing tale of a girl gone bad. On the contrary, her early complications give Bettie more inspiration to move to New York City to become an actress — just like thousands and millions of small-town girls before and after. She earnestly takes acting classes but finds it easier to make a living posing for kinky pictures than to be taken seriously as an actor. Paula Klaw, of the brother-sister team who filmed much of Bettie’s work in NYC.

Gretchen Mol’s performance as Bettie Page is brilliant. She balances naivete with knowing, strength with delicacy. And obviously, she’s made to look the part. The 1950s underwear is on point, and many of Page’s photos are reproduced precisely. While there’s nudity and plenty of allusions to sex, The Notorious Bettie Page isn’t an incredibly sexy movie — many of the scenes where they’re taking the photos are very lighthearted as Bettie tends to point out how silly what they’re doing is. Which is kind of a good reminder to not take sex too seriously after all. Prim & proper, waiting at the courthouse.