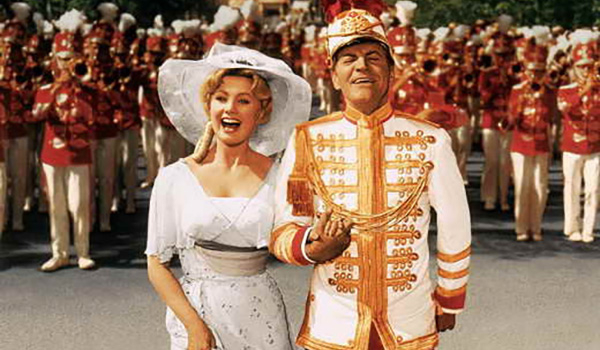 I love musicals in general, but I hadn’t seen The Music Man (1962) until recently. And now I know why it never appealed to me — the songs are not my kind of thing. The whole story and themes are so relentlessly midwestern — the musical’s writer Meredith Willson called it “an Iowan’s attempt to pay tribute to his home state” — and the pattern of the rhymes and the music are very “big band” and not what I prefer.

Willson’s other well-known musical is The Unsinkable Molly Brown, but the 1964 film version uses hardly any of his music, so that’s probably why I could stand it. And Debbie Reynolds was magnificent. A brilliant lead performance is also what saves this Music Man. Robert Preston carries the entire film as Harold Hill, a con man posing as a music professor selling band equipment. He sings in more than half the songs and is a force to be reckoned with when it comes to singing and dancing. While I may not love the actual musical, I did enjoy watching Preston’s performance.

I also enjoyed the costumes by Dorothy Jeakins. The story is set in 1912, in River City, Iowa, and while this is a small-ish town (where everyone knows everything about everybody), the residents aren’t country folk. The mayor’s wife, Eulalie Mackechnie Shinn, sets the fashion in elegant gowns, huge hats, and the occasional feather boa. Her compatriot Pick-a-Little Ladies are dressed in similar styles. The townspeople wear HATS, yes, people, it can be done! Films can be filmed with actors wearing hats, and yes, we can see the actors’ faces! Amazing. The hair tends towards 1960s styles more than turn-of-the-last-century, but the adult women have plenty of hairpins. 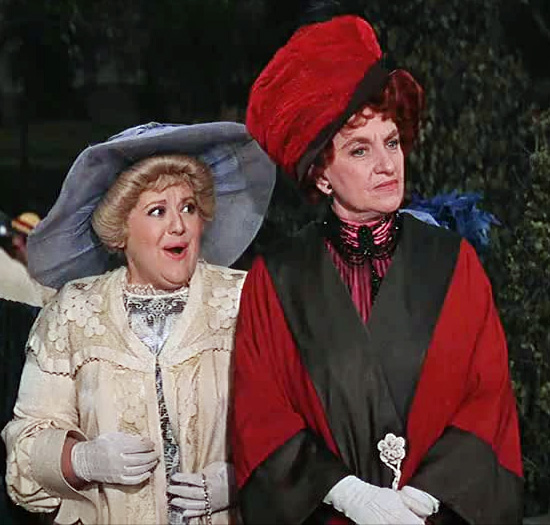 The mayor’s wife in red. 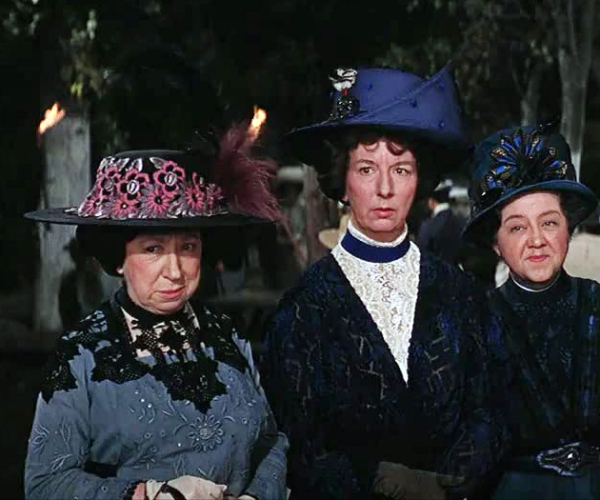 Big hats with lots of trimmings. 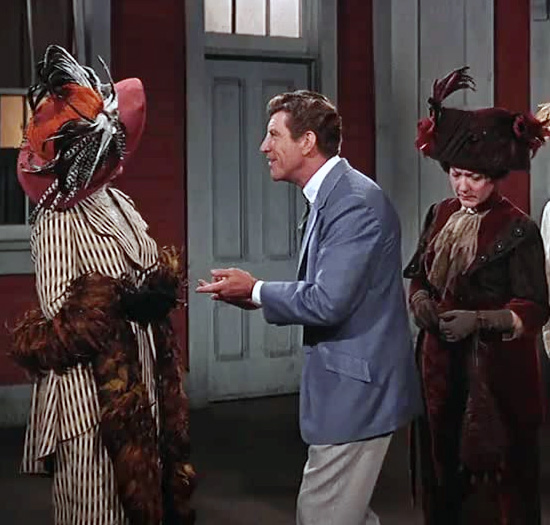 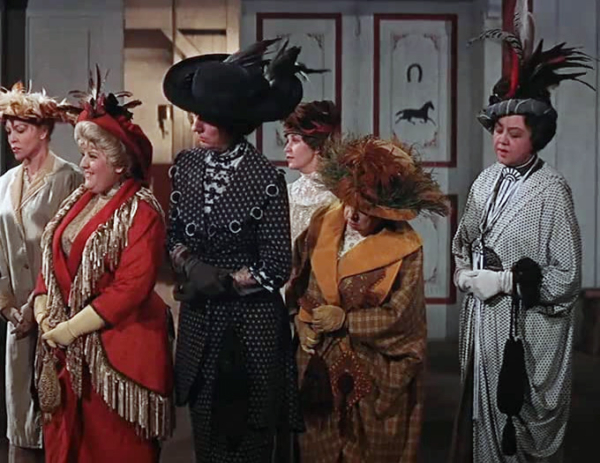 Their coats and hats seem to take inspiration from period elements like these: 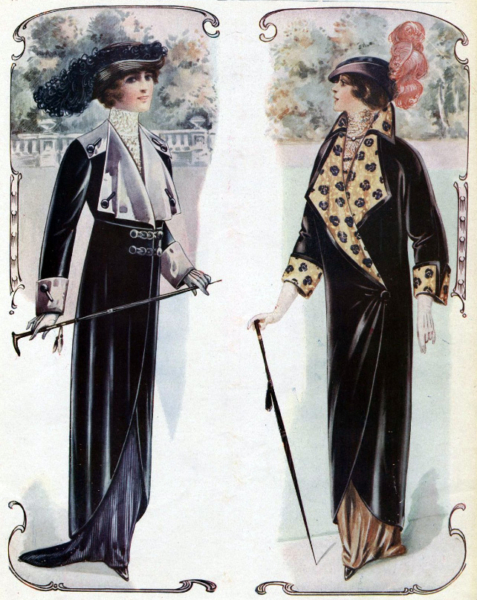 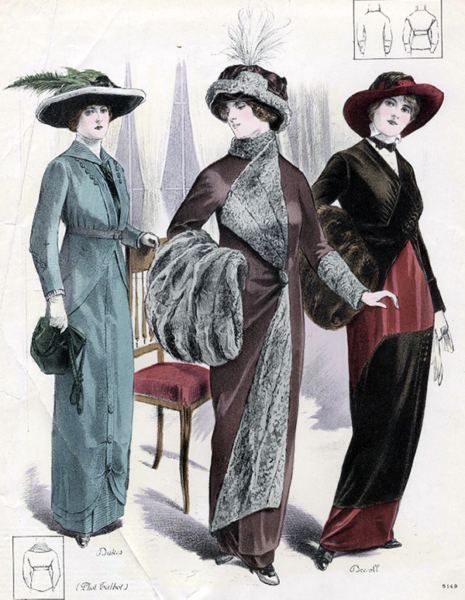 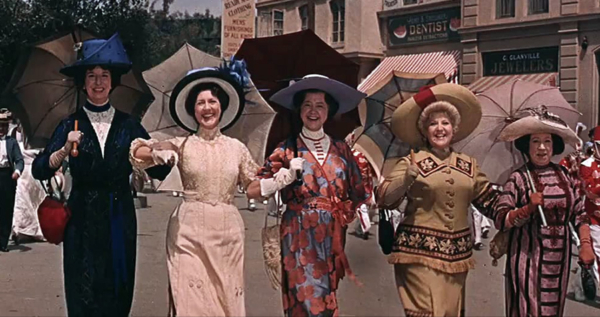 The ladies in the finale with hats & parasols! 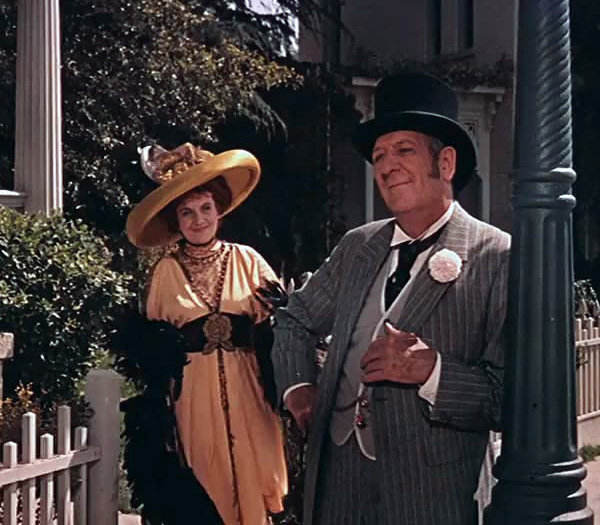 The mayor & his wife at the finale. 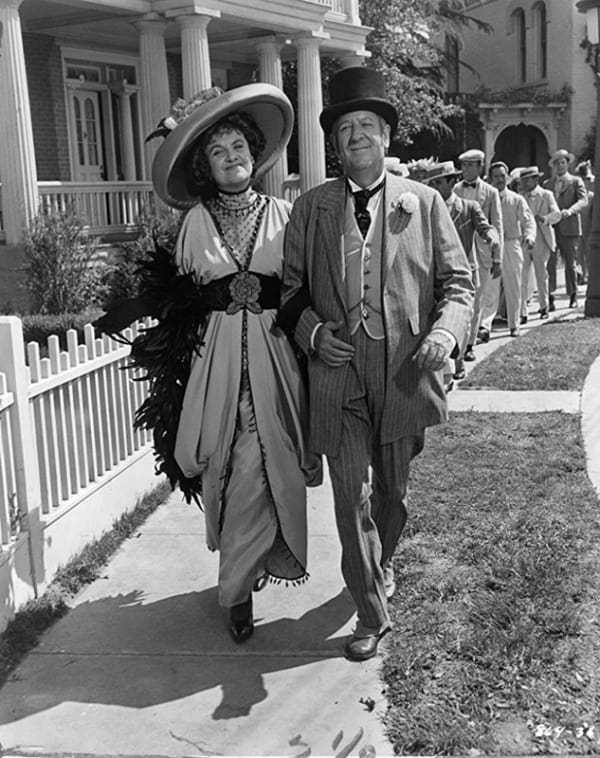 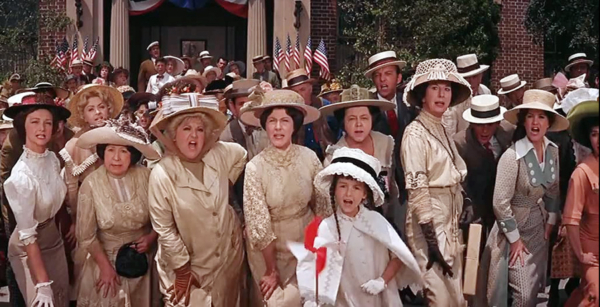 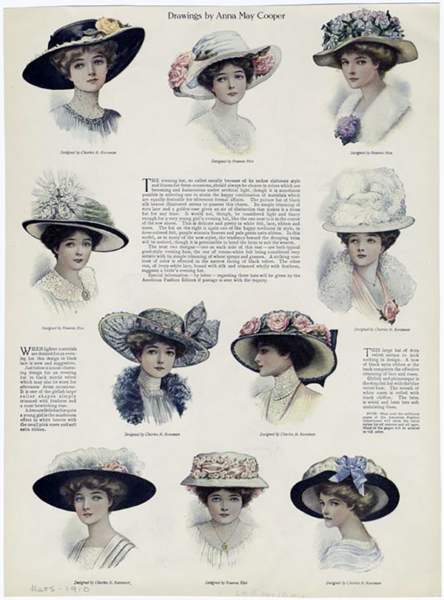 Marian Paroo (Shirley Jones) the town’s librarian and music teacher, and Harold Hill’s target / love interest, has a wardrobe that strongly reads as “1910s.” There’s no evidence of corsetry and her hair and makeup are rather modern, but the historical influences are easy to see. 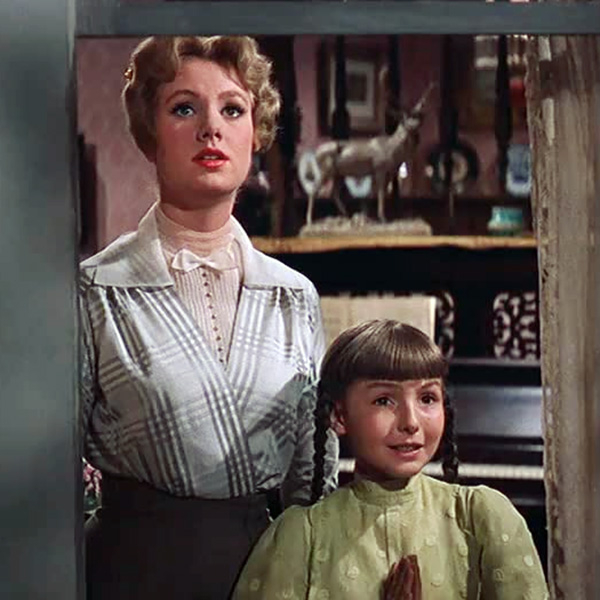 I’m not a fan of the song “Marian the Librarian,” but the choreography is fan-freakin’-tastic as Marian, Harold, and the library patrons move all around the two stories of the building. Mesmerizing! 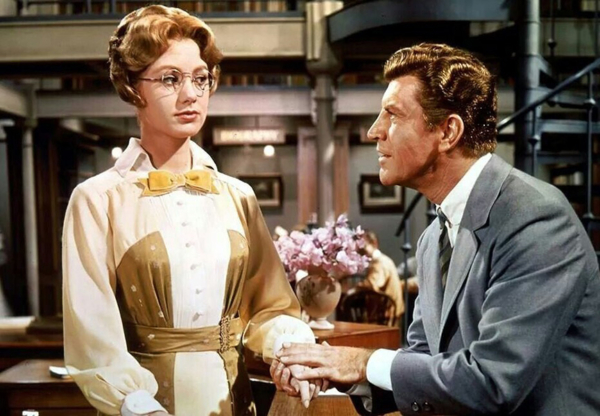 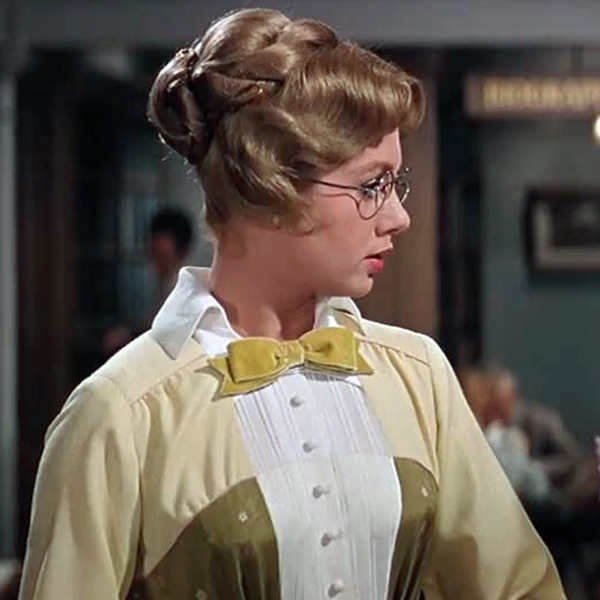 Hey, at least her hair is up, with actual hair pins!

While I dislike this yellow / green gown, it feels like a modernized 1960s execution of period designs such as:

At the ice cream parlor, Harold and Marian meet again, and her dress is much more to my taste. 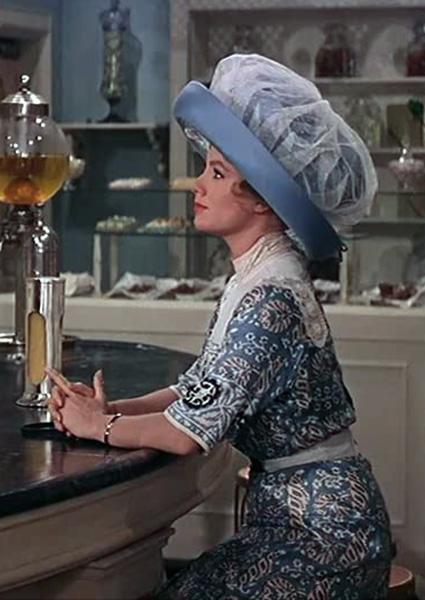 I love this blue print gown, it’s so delicate. Reminiscent of: 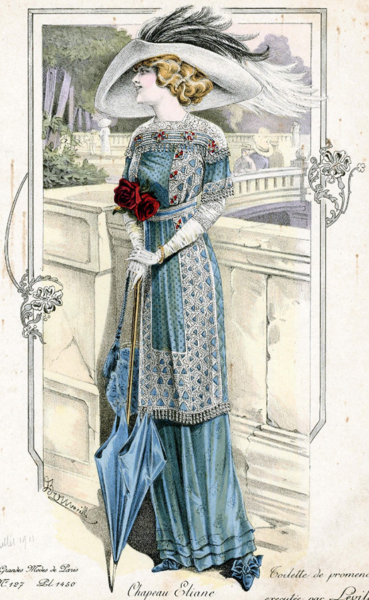 The hat is nuts but not out of the realm of possibility for the period. 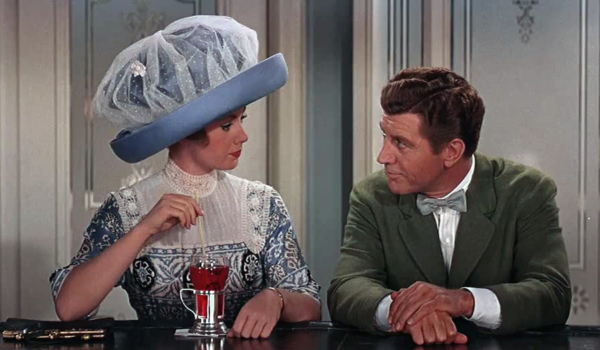 I couldn’t get a color screencap of her other blue and white dress, which looks even more of the period. 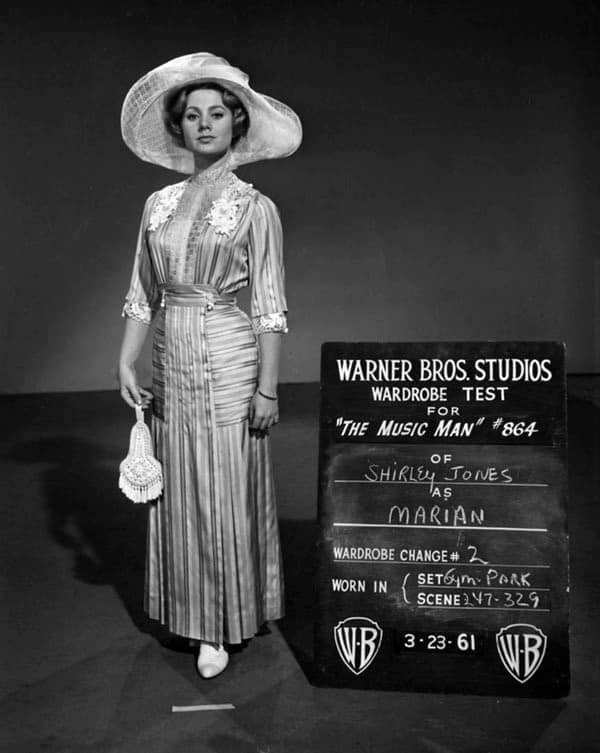 Even the purse looks vintage.

Maybe that one’s going for something like these in stripes or pleats:

For an evening song number on her porch, Marian wears this orange gown. 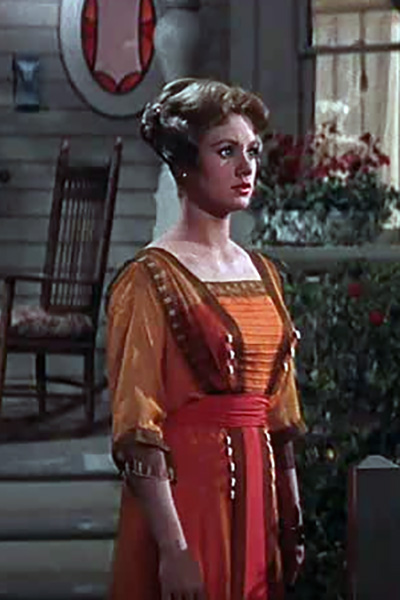 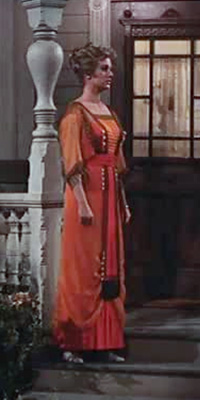 Then there’s the finale when it’s all band stuff. 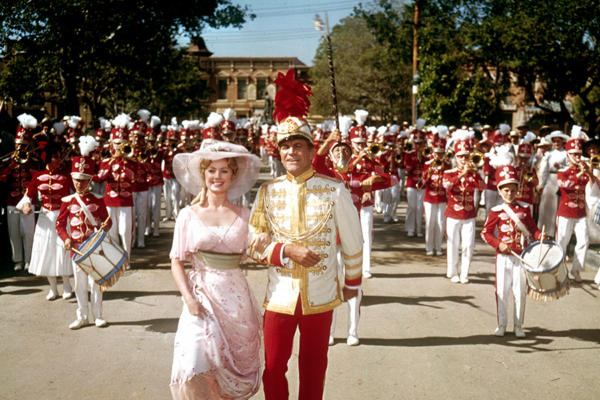 Do you got trouble right there in River City? What do you think of The Music Man?