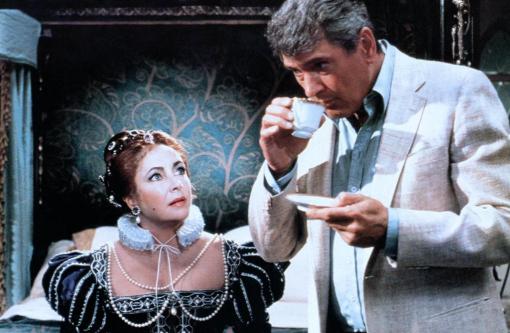 I felt like dipping into a cozy British murder film for today’s Throwback Thursday, and decided on the classic star-studded rendition of Agatha Christie’s Miss Marple tale The Mirror Crack’d (1980).

When I say it’s “star-studded”, I am not over-exaggerating. This film stars Angela Lansbury as Miss Marple, Elizabeth Taylor as the actress Marina Rudd, Kim Novak as her rival actress Lola Brewster, Rock Hudson as the big shot Hollywood director Jason Rudd, Tony Curtis as the even bigger shot Hollywood producer Martin N. Fenn, and Geraldine Chaplin as Rudd’s assistant (and probable mistress) Ella Zielinsky. It’s a veritable who’s who of Hollywood in 1980, when the film was produced.

It’s also a bit of a movie-within-a-movie, as the drama focuses on Marina’s comeback after a decade away from the screen due to a rumored mental breakdown. The Rudds are installed in a beautiful English country manor in the small village of St. Mary’s Mead, where Marina’s new vehicle, a film about Mary, Queen of Scots, is being shot on location. St. Mary’s Mead also happens to be where Miss Marple calls home, so of course she is on hand when the murder of a local woman happens at a party being thrown by the Rudds to celebrate Queen Elizabeth II’s coronation.

So yes, the film itself is set in 1953, though you wouldn’t know it from looking at the costumes, hair, and makeup. The only giveaway that this is not actually 1980 are the cars and the establishing scene at the Rudd’s manor which is hosting a coronation fete. Thankfully, there’s some “good” 16th-century costuming thrown in to amuse us. The costumes were designed by Phyllis Dalton (Much Ado About Nothing, The Princess Bride) and if nothing else, they are certainly timeless (as in, “I have no idea what time period this is set in”). The snark is strong between Marina and Lola, old rivals for decades. Lola is brought in by her producer husband (Tony Curtis) and cast as Queen Elizabeth I in Marina’s film, without Marina’s knowledge. Rock Hudson tries to get the rivals to play nice with one another to no avail. Their antagonizing antics soon threaten mutually assured destruction on the film. That hair and makeup just does not scream 1953 to me, but whatever. I really liked this devore dressing gown and pleated nightie. Geraldine Chaplin as Ella, the dependable assistant to Mr. Rudd, who harbors intense resentment for Marina. When one of the villagers dies by poison at the Rudd’s party, Ella is convinced she knows who did it. Her certainty backfires when she, too, is murdered. I grew up watching Angela Lansbury in Murder, She Wrote, which had to have been a direct result of her role as Miss Marple in this film. However, she’s definitely aged up and looking far more stern than the affable Jessica Fletcher. Angela Lansbury was only 55 when she played Jane Marple. Incidentally, the same age as Rock Hudson and Tony Curtis, who both look substantially younger thanks to the magic of makeup and lighting. The gown looks black here, but it’s a rich royal purple velvet with silver embroidery. We will forgive the floating ruff. The embroidery motif on Taylor’s gown is reminiscent of the one found on the gown in this sketch of Mary, Queen of Scots at age 13, by Francois Clouet. Sorry about the Getty Images stamp, but this was the only photo I could find that shows Kim Novak’s … ahem … décolletage. The thing around her neck looks more like an exploding cravat than a ruff.

All in all, the film was an amiable way to waste an hour and 45 minutes. Cozy English murder for the win!