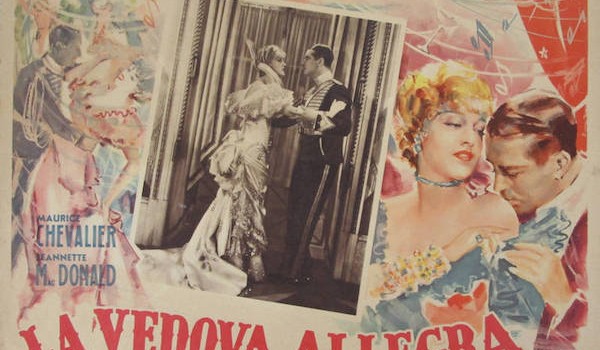 It took me two tries to watch The Merry Widow, the Jeanette MacDonald/Maurice Chevalier pre-code adaptation of the famous operetta. It started off just so damn twee and I realized I wasn’t in the mood, so I put it away and went back a few weeks later. I admit that I needed to knit to be able to focus, mostly because the musical numbers were so saccharine, but Adrian‘s costumes were as stunning as I’d hoped — and once the movie gets going, there’s some quite entertaining visuals and dialogue.

The Merry Widow started life as an stage operetta in 1905, and has been incredibly successful ever since. It’s been filmed multiple times, including a silent version in 1925 and again in 1952 starring Lana Turner. And if you’ve heard of the “Merry Widow hat,” those ginormous Edwardian hats, now you know where the reference comes from — a 1907 stage production in London. I, of course, have never seen any of these adaptations, so I went in to the plot blind…

Jeanette MacDonald is Madame Sonia, a rich widow in the fictional country of Marshovia, somewhere in the Hungary region. It’s 1885 and in Marshovia, widows have to go around veiled and having absolutely no fun. Enter Captain Danilo (Chevalier), the Rhett Butler of Marshovia, who wants to try to woo her. She’s having none of it and refuses to lift her veil, he stomps off. 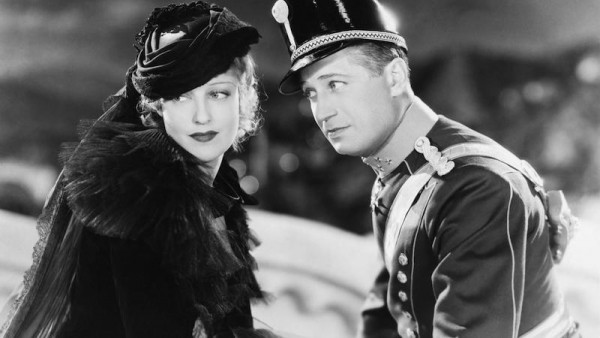 In the film, Sonia’s hat has a veil that comes down to about her nose. This dress is ALLLL fabulous black netting.

Sonia lives in an art deco paradise, but she’s bummed — probably because her hair, which is passably 1880s, suddenly goes all 1930s. 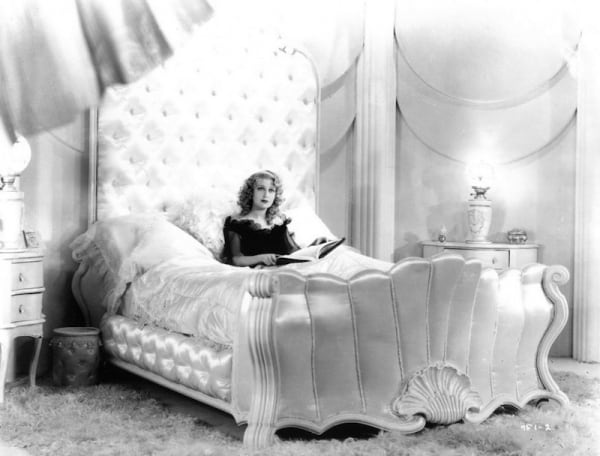 EVERYTHING is black, including her veils, shoes, and corsets: 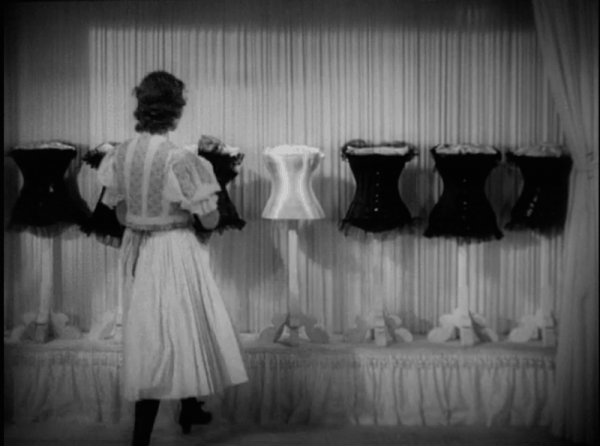 Even her PUPPERINO is black: 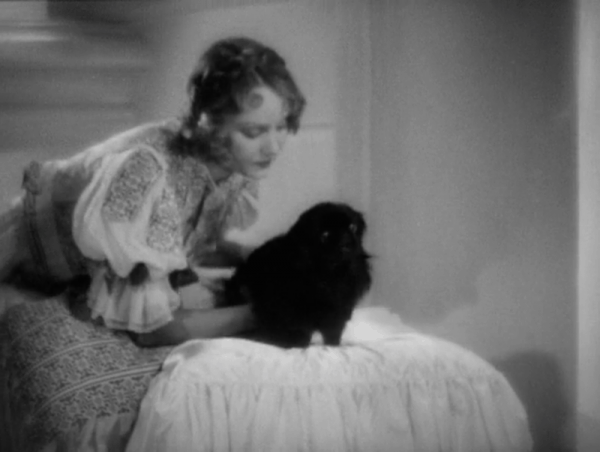 Sonia decides she’s bored to tears and she’s heading to Europe. Suddenly her wardrobe transforms into light colors, and so does her dog! 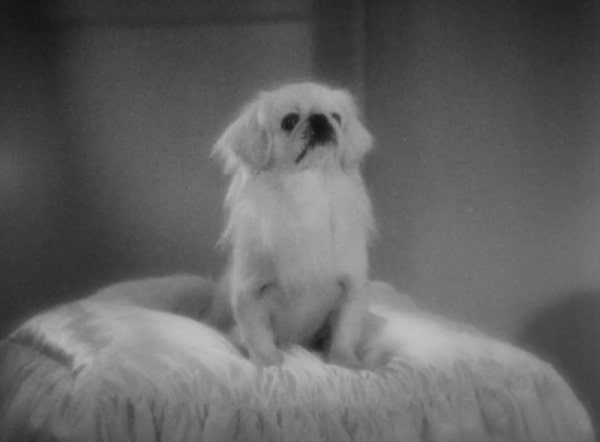 AIEEEE THESE WERE KENDRA’S FAVORITE SCENES IN THIS ENTIRE MOVIE

She heads to Paris, and Marshovia goes into an uproar, because they’re worried she’ll remarry and then Marshovia will be destitute. The king orders Danilo to go to Paris to woo her.

Both Danilo and Sonia head to Maxime’s, a literal brothel, no ifs/ands/buts about it. Danilo goes because he’s a cad, Sonia, I was kind of unclear about. 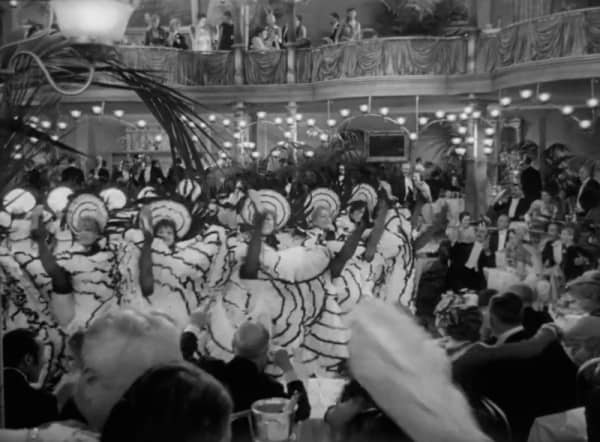 There’s some fabulous costume/choreography moments, like this epic cancan.

Allll the Maxime’s girls are dying to see Danilo again: 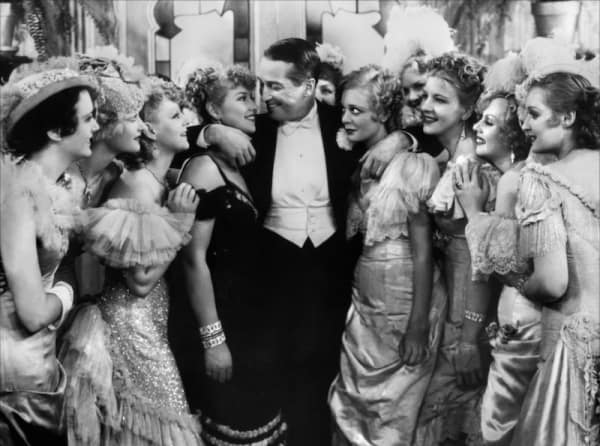 Sonia is mistaken for a prostitute by the madam and by Danilo, who is excited to see someone new. Sonia has recognized Danilo from him trying to seduce her in Marshovia, and she basically decides to screw with him; Danilo doesn’t recognize her, because she never lifted her veil. The madam sends Sonia off with Danilo, and there’s some great flirting; he then lures her upstairs to a “private dining room” by stealing her shoe. 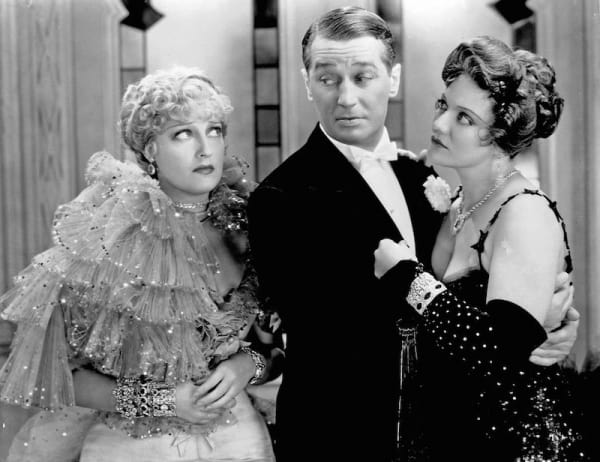 The madam’s dress has these great stars on a sheer foundation as the shoulder straps. Sonia is ALL SPARKLES with that wrap.

In the “private dining room,” complete with couch/bed, Sonia starts to feel shmoopy towards Danilo, while he tries to seduce her. She comes to her senses, realizing that he’s a ladies’ man who can’t commit to anyone, and ditches out. I am spending the entire scene with my mouth open because SHE IS BASICALLY CONTEMPLATING SHAGGING HIM RIGHT THEN AND THERE. 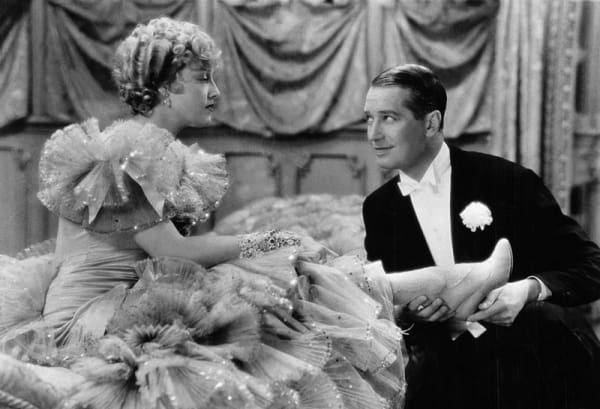 Under the sparkly wrap, more sparkles!! 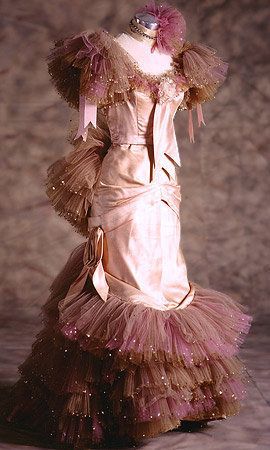 I found this on Pinterest labeled as being from the film and in the collection of Western Costume, but I can’t find any further attribution. But, theoretically, here’s the real deal? It certainly looks right!

Danilo Thinks About What He’s Done (note, they never actually do that) and realizes too late that he’s in love (that was quick) with “Fifi.” He gets drunk, and then has to be hauled in to the embassy ball the next night in order to woo Sonia. 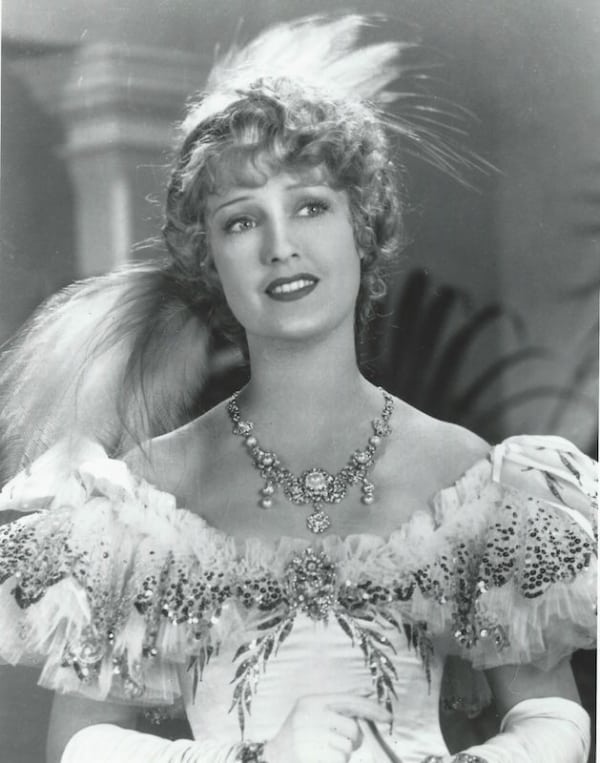 THE SPANGLES. THE EGRET FEATHERS. 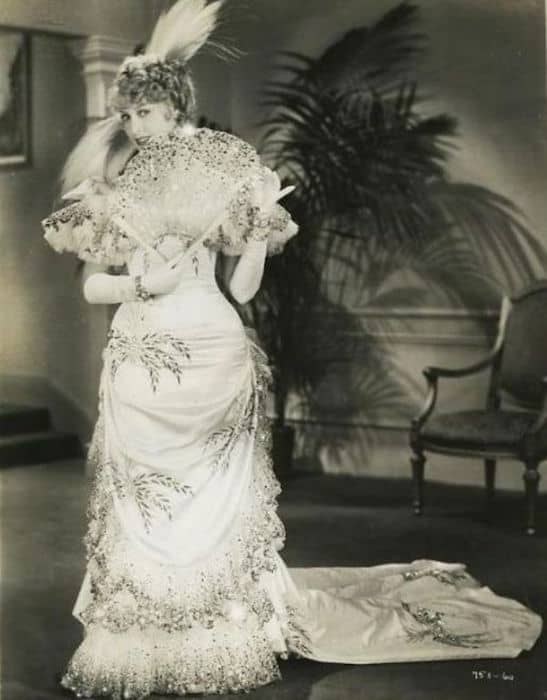 Danilo manages to convince Sonia that he actually loves her, and the two dance in yet another beautifully choreographed scene: 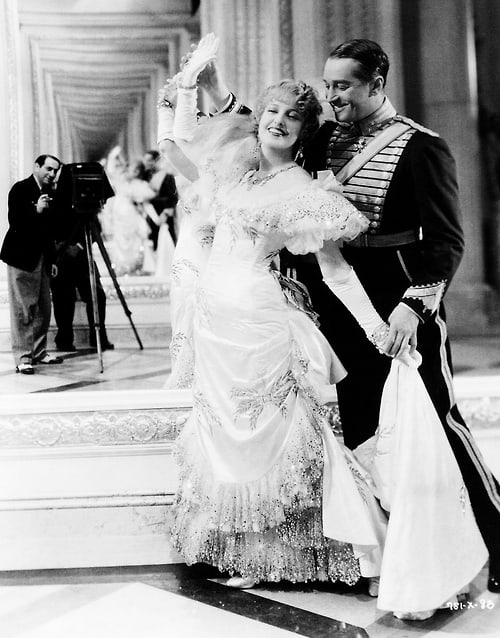 But Sonia overhears Danilo talking to the ambassador about how he has been ordered to woo her, and her heart is broken. She takes off, Danilo is court-martialed back in Marshovia, and Sonia goes to visit him wearing this ruffly number: 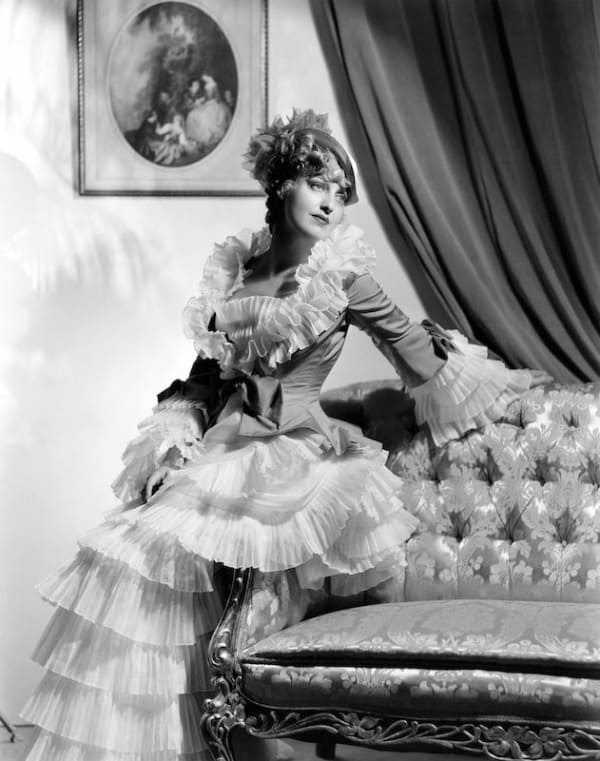 How does it all end? Well you gotta watch the movie to find out!

Have you ever seen that many ruffles in your life?