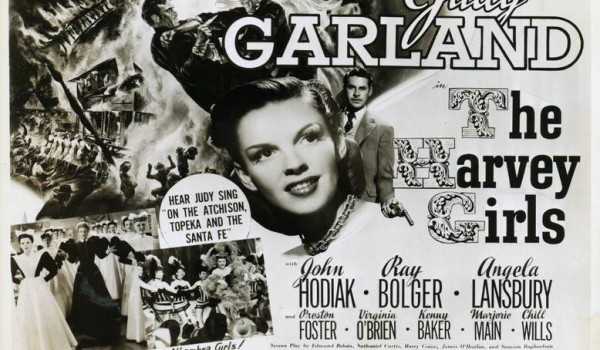 The Harvey Girls (1946) is a big MGM musical that stars Judy Garland, John Hodiak, Cyd Charisse, Virginia O’Brien, Ray Bolger, Marjorie Main, and Angela Lansbury (yup, Mrs. Potts!). For a very detailed summary of the entire film, check out Cameron’s review at The Blonde at the Film. The short version is that Fred Harvey was a real person who opened what was essentially the first chain restaurant and they were staffed by women called Harvey Girls, and this movie is a fictional love story musical about some Harvey Girls (most importantly Judy Garland as Susan) in a fictional New Mexico town who go head-to-head with the local saloon, owned by Ned (John Hodiak) who becomes Susan’s love interest and staffed by saloon girls (most importantly Angela Lansbury as Em). The movie poster kind of says it all when it states, “It’s The Harvey Girls Vs. The Wicked Alhambra Girls!” and that’s how we’re dividing this look into the costumes of the film, with Part 1 focusing on the “Good” Girls and Part 2 on the “Bad” Girls.

The real Harvey Girls are really interesting since they were single young women of good character who left home to go work in the Harvey Restaurants starting in 1883, acting as a “civilizing” influence in the Wild West. The movie gives credit in its opening to the real Harvey Girls, who were still working at restaurants when the film was released in 1946, as well as to the Fred Harvey Company, which assisted with “many historical details.” TCM says, “Studio records also indicate that two years of research was completed to recreate the film’s authentic sets and backgrounds of late nineteenth century New Mexico.” Were the same standards applied to the costumes? That’s what we’ll explore here.

Irene was the costume supervisor and the women’s costumes were designed by Helen Rose and the men’s by Valles. With this big-budget Technicolor musical and big ensemble cast, there were a LOT of people to costume. The men’s clothes are kind of what you’d expect from this era. Cowboy hats, colourful shirts, and colourful bandanas with the occasional suit mixed in, mostly worn by Ned. Pretty standard Western fare. The big sleeves seem to imply 1890s, but they’re not ridiculously huge and there’s a bit of a turn-of-the-century aesthetic with the hair and hats, so I would guess that for the setting we’re looking at c. 1897. The mens, in their standard Western garb.

The most iconic look in this movie, especially in terms of the time it was made when the Harvey Girls were still around, are the uniforms. The seem to have pretty consistently been made up of a black dress and starched white apron, kind of what we see Puritans depicted as dressing like on Thanksgiving decorations. Makes sense when you’re emphasizing the moral fibre of the young female waitresses. Compare the real uniform from the era of the movie’s setting, printed on the employee manual, and this photo from a few years later with the costumes worn by Judy Garland and company. Photo of some Harvey Girls from the early 20th century from the University of North Texas Libraries. Pretty close, even down to the silly-looking bow on top the of head.

Other than the uniforms, all the clothing worn by the “good” and “proper” women can be broken down into a few categories: travelling outfits, butter churn-y day dresses and ensembles, nightwear, and evening dresses. Let’s compare with some real 1890s fashions!

By the 1890s suits for ladies, also called tailor mades, were very popular. Judy and the Harvey Girl Gang start out travelling on a train, and they’re very appropriately attired in shirtwaist ensembles while on the train. But they get a bit more formal by adding the jackets when they disembark for a couple of big musical numbers, including “On the Atchison, Topeka, and the Santa Fe.” (Check out the scene here on YouTube.) So much eye candy with all the sharply dressed ladies in their gorgeously braided suits. Take note: all of the women have their hair up (must be before the Great Bobby Pin Shortage hit) and are nicely accessorized with hats, cloves, purses, handkerchiefs, collars, and little ties/cravats. Judy’s actual suit, for sale at Christie’s. Check out the great details of the serpentine trim, asymmetrical closure, and itty-bitty ruffle. They’re mostly wearing neutrals, which makes sense for travelling when you’d get all dusty and dirty. All the trim looks great, especially on screen, but it’s probably a lot more than regular women of the sort that these are supposed to be would have on their suits.

Just so you don’t get confused, the fine folks of MGM made sure to make it INCREDIBLY obvious who is a “good girl” and who is a “bad girl” by the costuming. Good girls wear gingham and prints and butter-churn-y dresses. Judy has herself a merry little Christmas in this candy cane red and green ensemble. (Full disclosure: this outfit is the only actually holiday-themed thing about the whole movie.) Heritage Auctions had the blouse for sale.

While gardening or hanging out, the girls wear outfits like these wrappers, which are really suitable only for gardening and churning copious amounts of butter. Wrappers feature frequently in catalogues of the era, implying the popularity of them amongst women for wear around the house. Yeah, it’s very Sister Wives on the Prairie here. (Well, minus Angela Lansbury in the back.) Wrappers from an 1898 O’Neill Co. catalogue.

And the nightwear carries on the theme of looking sweet enough to give you cavities. So wholesome with all those ribbon bows and lace!

One of the things that is really noticeable about a lot of the outfits in the Harvey Girls is that the skirts are much, much fuller than skirts in the period would have been. Looking at dresses from the era, you can see that the skirts are fairly slim in the front, though A-line, and the fullness is in the back. The skirts in the film are often pretty full all around, especially those on Cyd Charisse, and it makes sense for all the dancing scenes. See how fabulous the movement looks when Cyd is dancing and you can see the pink petticoat underneath the print gown. Slim front A-line skirt on this 1897 Worth dress at the Costume Museum of Canada.

We do get to see the Harvey Girls all gussied up when they host a dance. And the circular skirts are on full display as they do a waltz number. Judy/Susan is in a sparkling silver number while the other girls are in pastels. Contrast the full skirts of the Harvey Girls with this fashion illustration of evening gowns from an 1898 La Mode Illustrée.

Finally, because this movie is a musical comedy, of course it ends with a wedding. Judy/Susan is all in white, although it would be an unlikely choice for a girl of her social standing. The dress is satin with a whole lot of lace embellishment. A picture of the wedding dress in the collection of the Vintage Film Costume Collector. That’s all for the “good” girls in the Harvey Girls! Stay tuned for Part 2: The “Bad” Girls, in which we’ll look at how 1940s Hollywood imagined saloon girls dressed. It’s pretty spectacular.

Are you a fan of The Harvey Girls? Do you like the good ones or the bad ones best?