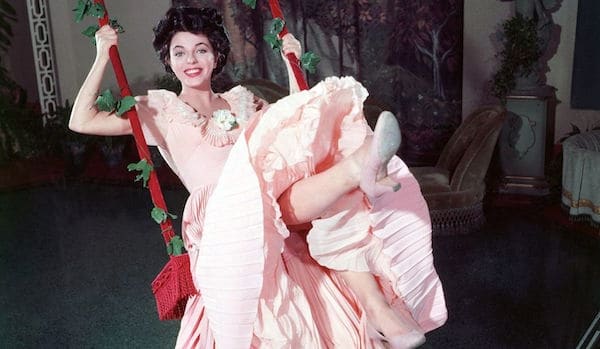 The Girl in the Red Velvet Swing (1955) is a sanitized look at the true story of artists’ model Evelyn Nesbit, her affair with famed architect Stanford White, and his June 1906 murder at the hands of Nesbit’s husband, rail and coal tycoon Harry Kendall Thaw.

Joan Collins plays Nesbit, who started modeling for photographers, painters, and illustrators in New York City around age 15. She soon became the most popular face for the covers of magazines including Vanity Fair, Harper’s Bazaar, The Delineator, Women’s Home Companion, Ladies’ Home Journal, and Cosmopolitan.

She began an affair with the married White that centered on the pivotal “Red Velvet Swing” that hung in White’s apartment. According to her own memoirs, White drugged and raped her; in the movie, the sex is VERY consensual, with Nesbit in love with and pursuing White, who attempts to resist. Their consummation is implied through a HILARIOUS scene in which White pushes Collins as Nesbit in the swing higher and higher. Collins plays Nesbit as sickly sweet and incredibly naive, despite her grumpy mother essentially shaking her head constantly.

Eventually, things fade with White, and she ends up marrying the insanely jealous Thaw, to whom she confessed her previous relationship. In the film, he couldn’t be more controlling or angry — he’s the literal poster child for an abusive husband — and just like in real life, ends up shooting and killing White during a performance at the rooftop Madison Square Garden theater (famously stating,”I did it because he ruined my wife!”). A sensational trial followed, and the film ends with Nesbit unhappily portraying herself in the red velvet swing in vaudeville. [Editor’s Note: This historical incident is also part of the 1981 film ‘Ragtime,’ starring Elizabeth McGovern!]

The costumes were designed by Charles Le Maire, who was wardrobe director for about a million films, and designed a smaller number, including Napoléon love story Désirée from 1954. 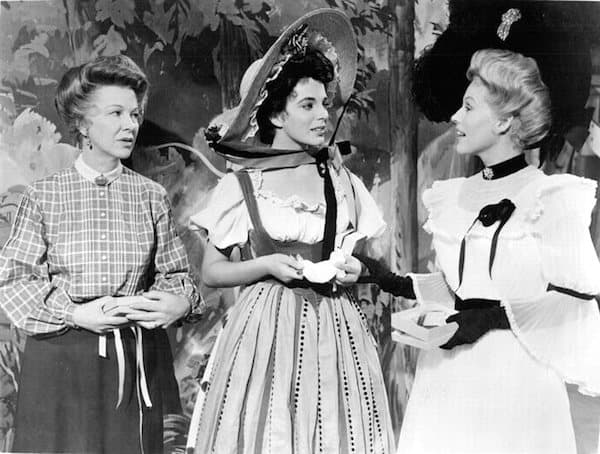 A young and naive Evelyn (center) performs as a “Floradora girl,” while her costume maker mother (left) works behind the scenes.

Here’s that stage costume in color. It’s all very Disney. 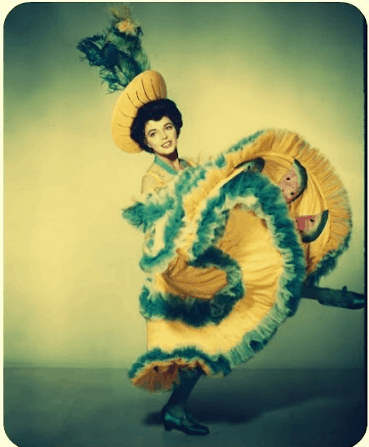 Evelyn poses for an artist in her turn-of-the-century-ish bathing costume. 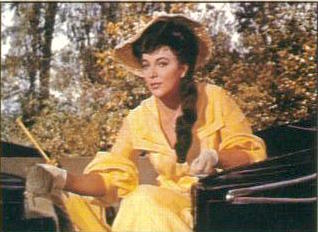 She goes to a party where Stanford White observes her and is smitten. That’s a lot of yellow.

He arranges for a fellow dancer (in EXCELLENT stripes!) to bring her by his apartment for lunch. 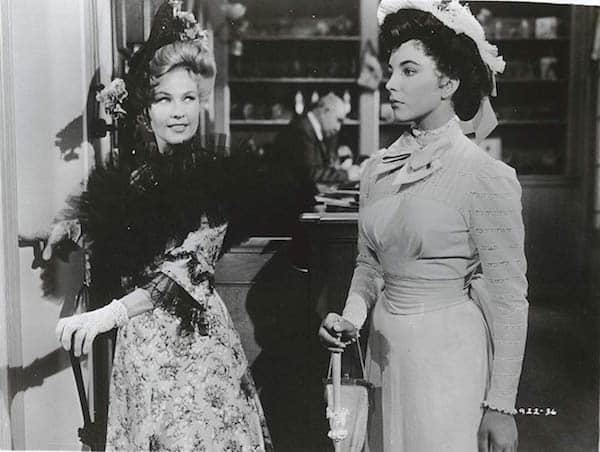 Evelyn is all unsuspecting… 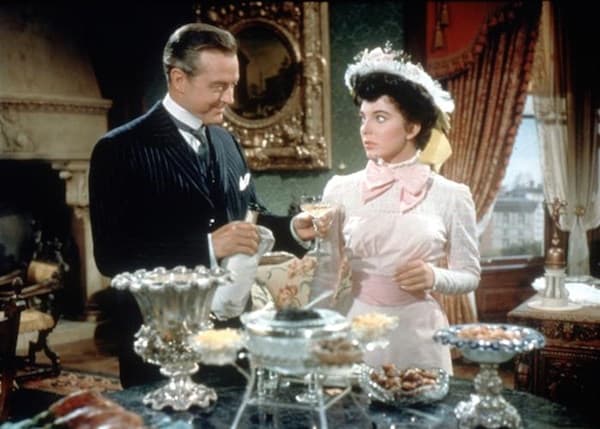 But she CAN’T RESIST WHITE’S CHARMS!! 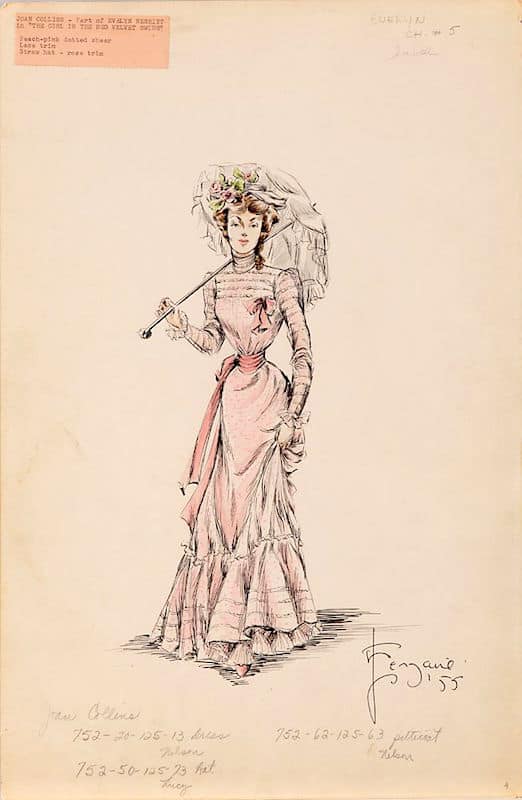 A sketch of the gown Collins wears for that fateful meeting, by Charles Le Maire. 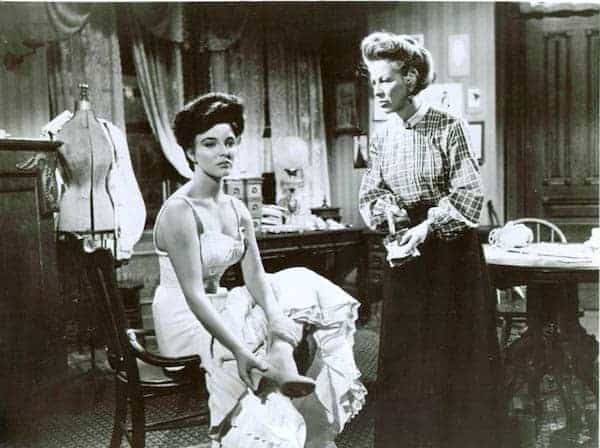 Evelyn is in deep smit, while mom tries unsuccessfully to warn her about older, married men. 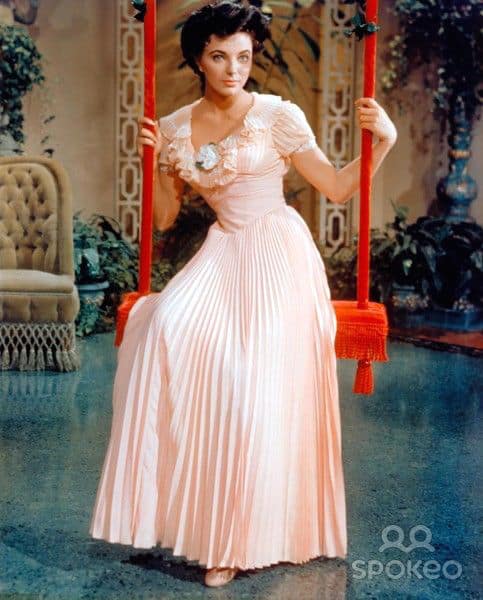 But Evelyn can’t stay away! Swinging as metaphor for sex must occur! I don’t totally understand this dress. 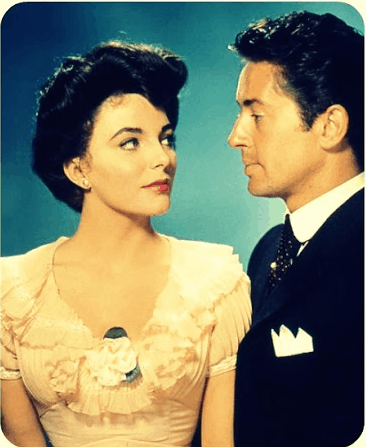 Along the way she meets Thaw… 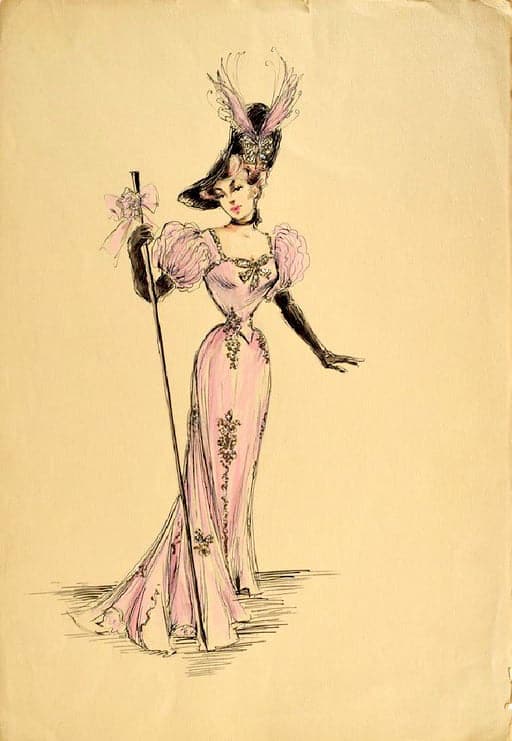 Another of Le Maire’s costume designs from the film. I can’t figure out which dress this is, unless it’s the swing dress and they went REALLY different in the execution! 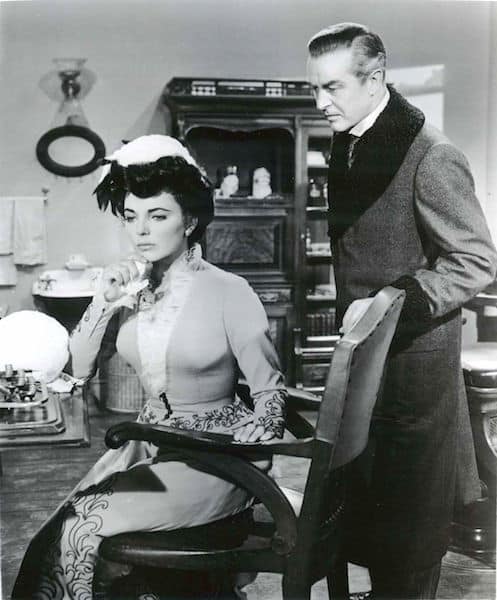 Evelyn is in love (in a painted-on ensemble – is that a knit??), White Has Concerns. He eventually sends her to boarding school, trying to do the right thing by her but also in a gross Gigi sort of way. 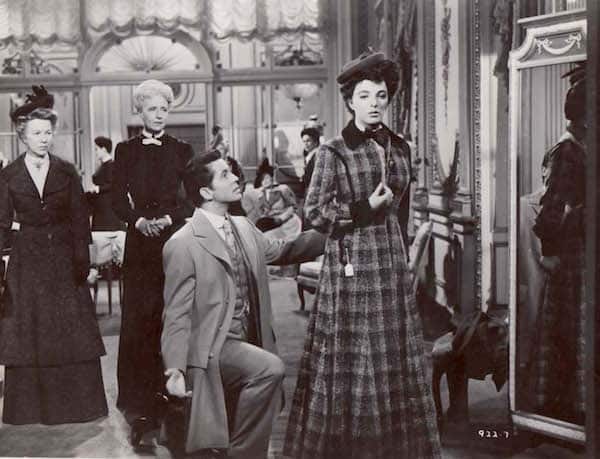 But Thaw keeps throwing himself at Evelyn, and mom Highly Approves. 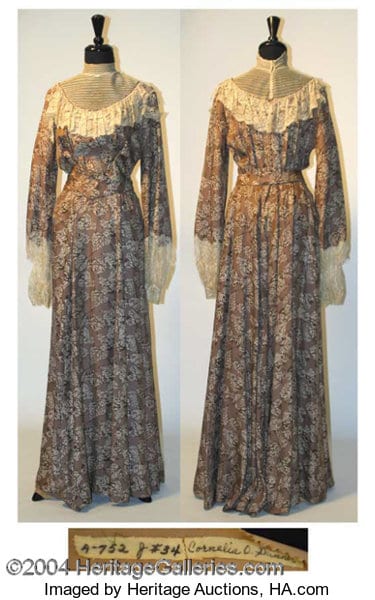 One of mom’s costumes. 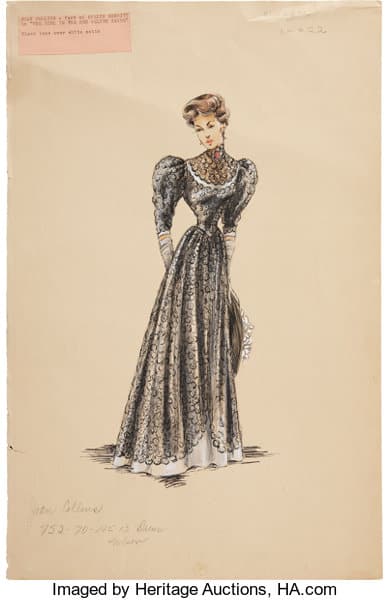 Which looks MUCH better as a sketch! 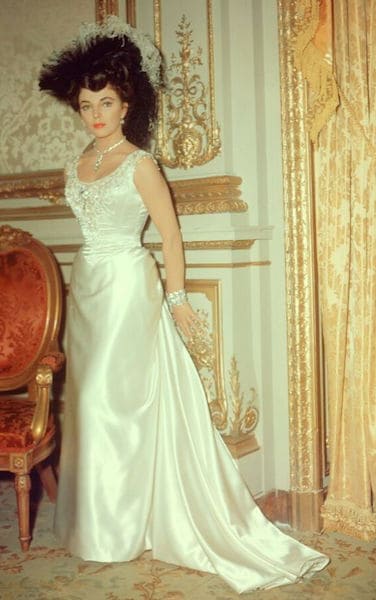 Eventually Evelyn marries Thaw, he gets controlly on a glacier in Switzerland, they go back to New York, he kills White. This is what Evelyn wears for the fateful shooting. 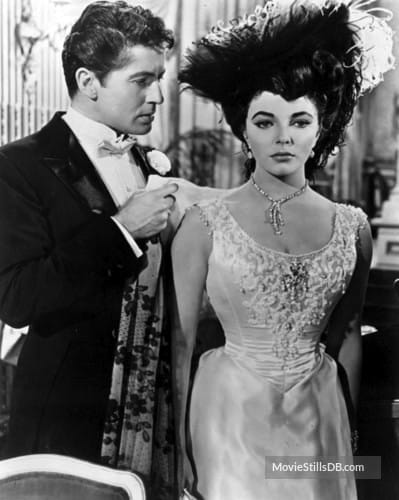 Well what would you wear when your current jerk of a husband kills your One True Love? 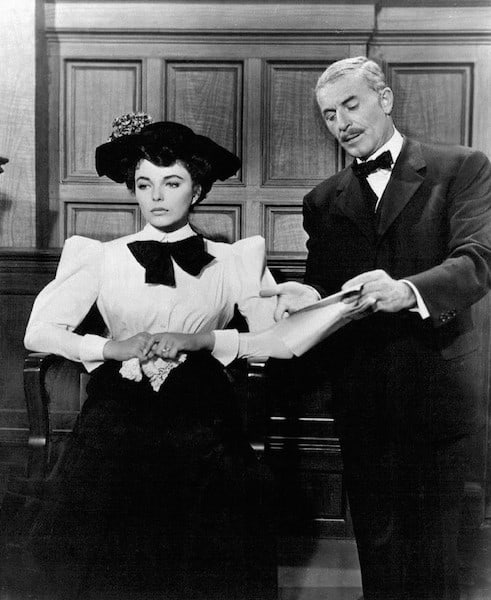 Evelyn has to testify at the trial. 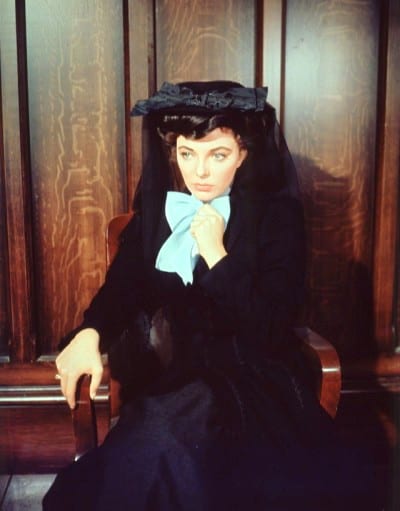 Have you seen The Girl in the Red Velvet Swing?