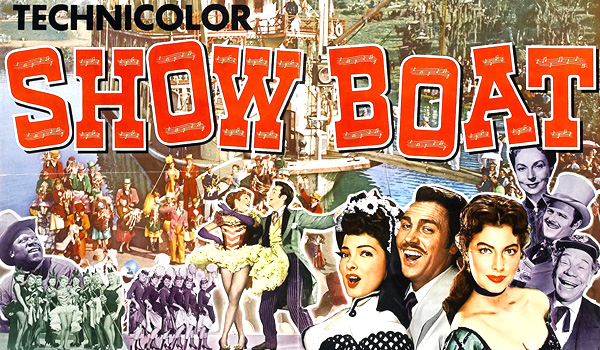 It’s true that I often hunt down movies because of a costume picture. This is Frock Flicks, after all. And while there are multiple versions of this stage musical on film, it was 1951’s Show Boat that I needed to see because of Ava Gardner in this ah-may-zing green and plaid bustle gown designed by Walter Plunkett. No, it’s not historically accurate, but yes, it is a stunningly gorgeous creation, and not just because of Miss Gardner. 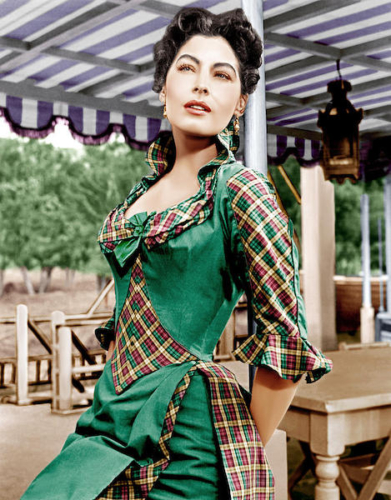 But before I get to the costumes, let’s talk about the story. The stage play is set in 1887 on a show boat called Cotton Blossom that’s arrived in a Mississippi small town. The show’s lead actress, Julie (Ava Gardner), and her husband, the lead actor, Steve (Robert Sterling), make a splash and draw attention from the townsfolk. Meanwhile, a gambler Gaylord Ravenal (Howard Keel) comes aboard and makes eyes at the sweet young captain’s daughter Magnolia (Kathryn Grayson).

At the big show, the town sheriff tries to arrest Julie because someone in town has discovered that she’s biracial — part Black — so her and Steve’s marriage is miscegenation. Steve takes a pin to prick Julie’s finger and suck blood from it, since ‘just one drop’ of Black blood is all it theoretically takes to make him also Black under this law, and thus there’s no miscegenation and their marriage is still legal. However, Blacks can’t be onstage with whites, so they have to leave the Cotton Blossom and their show. 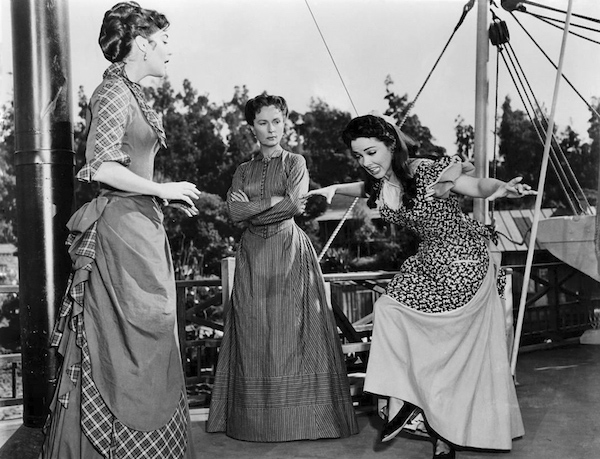 All of this takes place in the first 30 or so minutes of the film, and the rest is a fairly generic love-’em-and-leave-’em story between Magnolia and Gaylord. Even the rest of the musical numbers are just so-so — Julie has already sung “Can’t Help Lovin’ Dat Man” (though Gardner was dubbed by Annette Warren) and Joe (William Warfield) sings “Ol’ Man River” as Julie and Steve leave, and these are the iconic songs from the show. 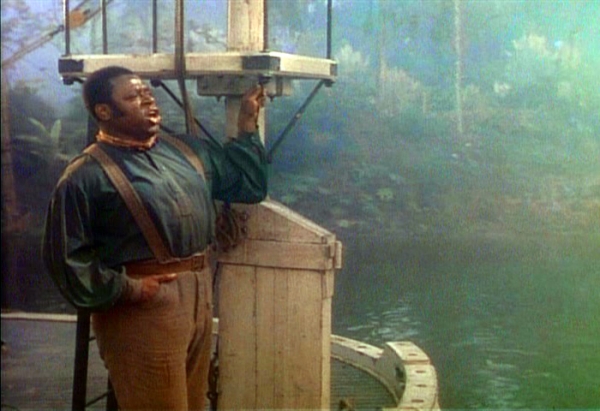 Lena Horne says she was passed over for the role of Julie, and of course the Production Code at the time could have questioned an actual Black women depicting miscegenation onscreen. But the fact that all the major characters are shown on Julie’s side and against the stated laws (that they dutifully, if sadly, comply with) seems like the tiniest evidence of change. Magnolia considers Julie her best friend and idolizes her. Steve tries to change his race because he loves Julie so much, and he leaves his career for her. The idea that Julie was “passing” as white is inherently racist and born of the white supremacist system that means a Black woman wouldn’t be able to sing, perform, and earn a living on stage, either within this story or in this film (as Lena Horn’s experience shows).

But for 1951, Ava Gardner does a decent job for the period of elevating the tragic mulatto stereotype. Does that make this a good movie? That’s for each person to judge. I do think it makes Show Boat a better movie than it could have been and one worth looking at for these reasons. I’d much rather talk about the topics this movie raises than throw it out and pretend it does exist. 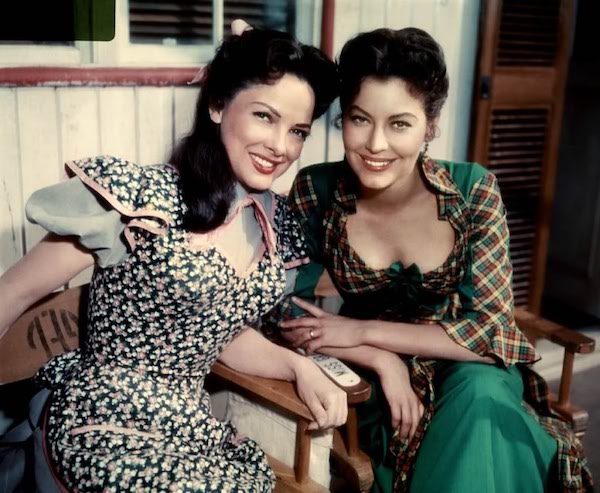 So, with a fat load of racism, only a couple good songs, and a slog of a romance, can the costumes save Show Boat? It’s Walter Plunkett goes Victorian by way of all the Technicolor he can muster. Do not adjust your set, he really does use all these colors all at the same time! Garish, yes, but hey, Victorians were pretty garish too. The sleek fit is amazing, and while I doubt there are historical corsets under there, I’m sure Ava and Kathryn are girdled within an inch of their lives, because Plunkett didn’t leave even the barest bit of ease in their gowns. They results are sometimes gorgeous to look at, with only a faint nod towards the 1880s. 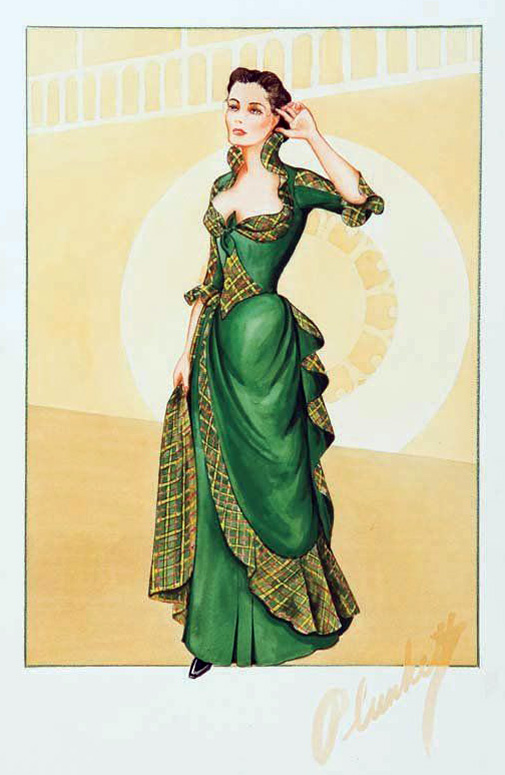 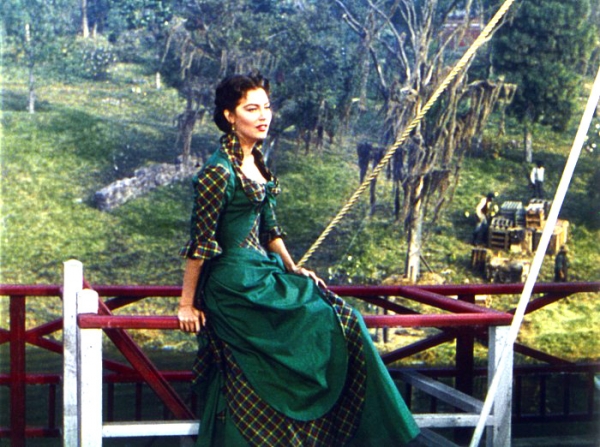 Side view of the green plaid gown. 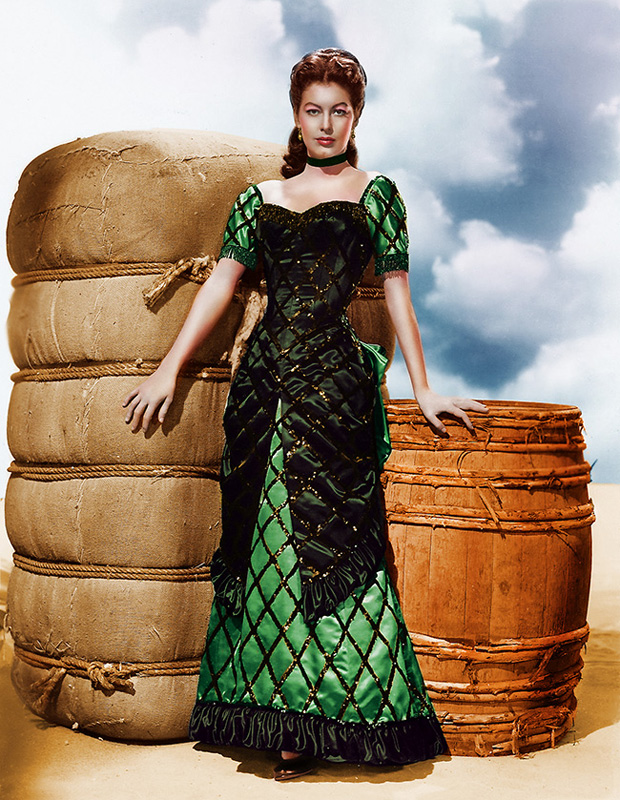 Another green stunner. The black overskirt is a hint at a period style. 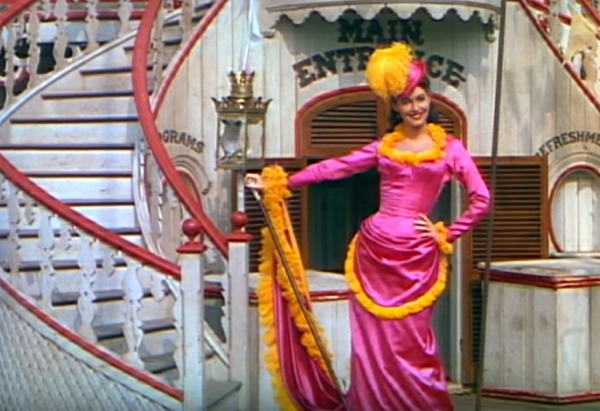 Julie makes her entrance in the film in this eye-searing ensemble. The bodice fits like a glove! 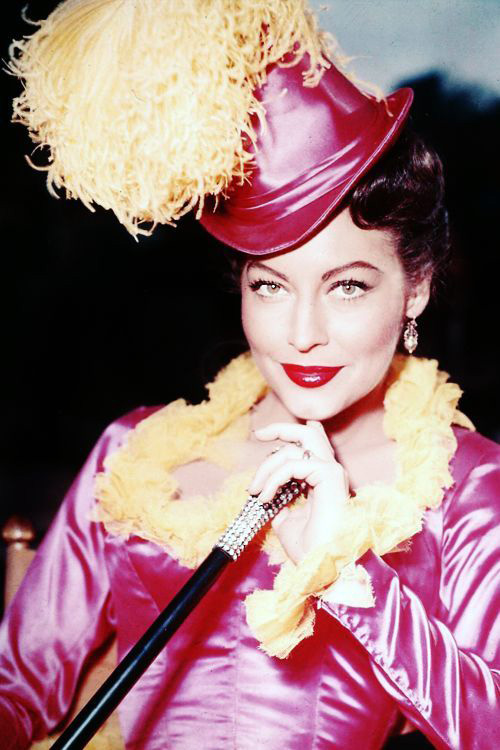 Someone at MGM really knew how to work with satin! Also, ostrich feathers. 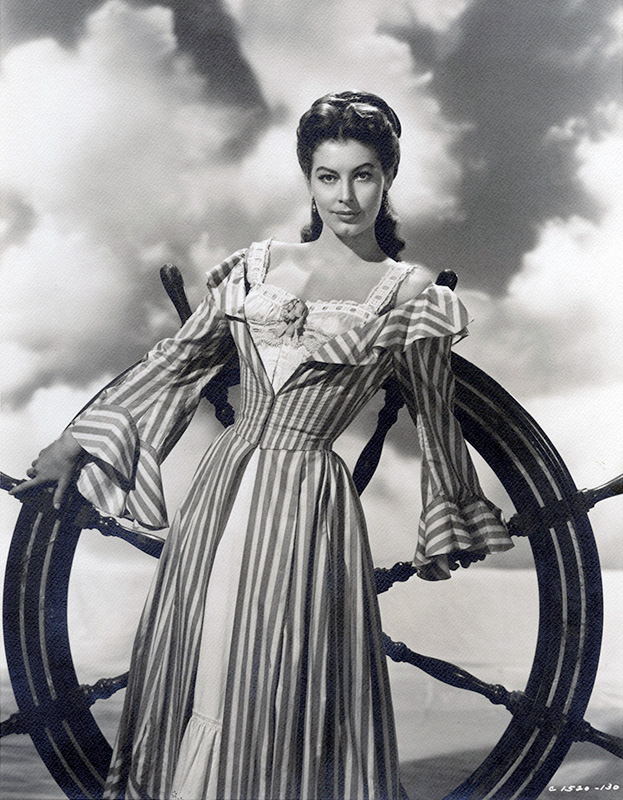 And then there’s this. It’s … cute but weird? 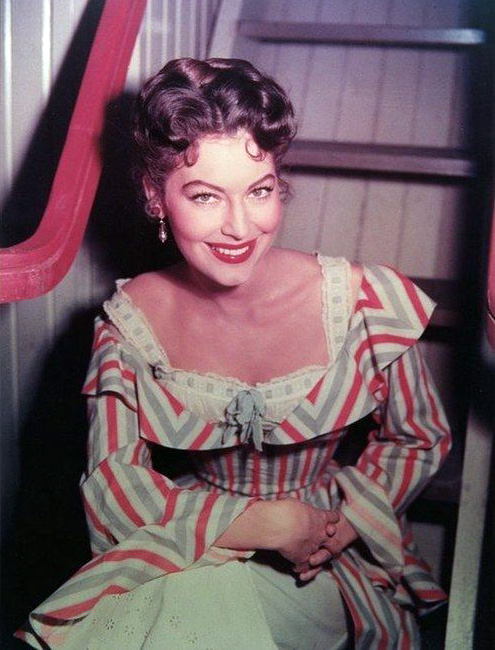 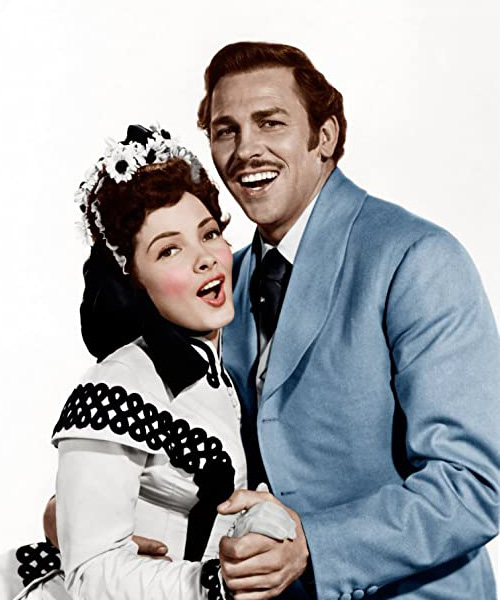 This white & black ensemble is one of Kathryn Grayson’s more interesting costumes, tho’ I couldn’t get a full image. 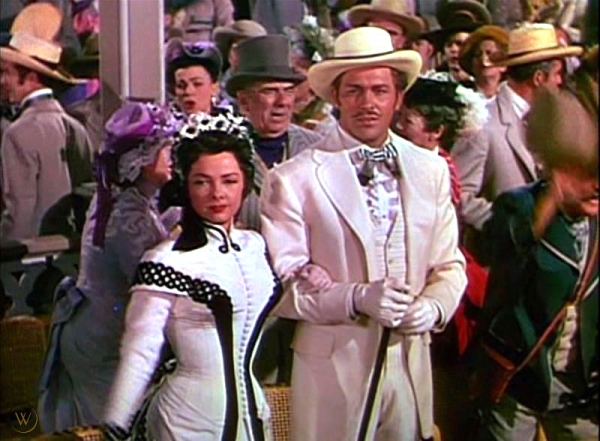 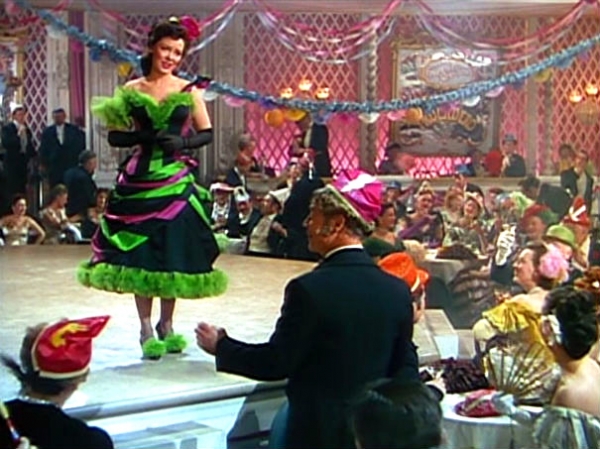 The movie is filled with outrageous stage costumes, but I’m only including this one on Grayson. The bath scrubbies on her feet are an interesting choice. 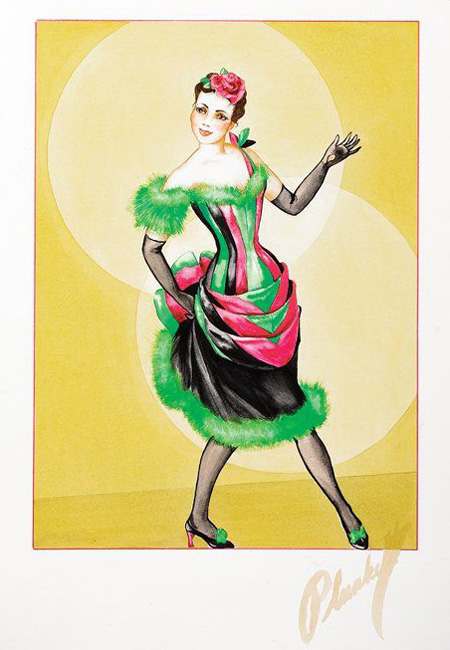 Have you seen Show Boat? This version or any of the others?