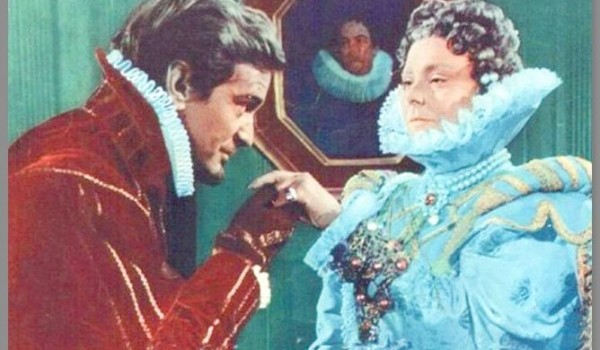 Trodding well-worn ground with Sir Walter Raleigh and Queen Elizabeth I, Seven Seas to Calais (1962) is an Italian production that mixes up the obvious history with both the required swashbuckling and pirates and some unexpected history. That’s why I’m here — there’s a significant side plot about Mary Queen of Scots.

Yeah, well, I have my obsessions. We all do. Coincidentally, this side plot is driven by fictional character Malcolm Marsh, Raleigh’s first mate, who’s played by Keith Michell. He’s best-known for playing Henry VIII in the BBC’s The Six Wives of Henry VIII (1970) miniseries. In Seven Seas to Calais, he has a love interest at QEI’s court, a French woman named Arabella (Edy Vessel). Because Queen Elizabeth was totally into having French ladies in waiting, OK.

Arabella gets mixed up with a courtier named Babington who asks her to take a little gift to Mary of Scotland when she visits. Because even though Mary is imprisoned by Elizabeth, apparently all the French ladies are allowed to visit, OK, right.

Yes, this leads to the infamous Babington Plot that was MQoS’ downfall, but in this flick, it happens literally under Elizabeth’s nose and Sir Walter Raleigh saves the day. Seven Seas to Calais is as much a history lesson as The Tudors or Reign today, with standard-issue 1960s historical costumes. There’s nothing new under the sun. But it’s all shiny, and Irene Worth is a decent Elizabeth (if not as impressive as Flora Robson or Bette Davis), while Rod Taylor is reliably dashing as Raleigh. Most of the film is off at sea. While back at court, Arabella-of-the-Heavy-Eye-Makeup gets sucked into the Babington Plot. Mary Queen of Scots and her ladies wear the requisite caps (and no, that’s not a tiger-print stomacher, it’s just a weird, modern brocade). Bonus floating ruff. Are you into the swashbuckling or does playing fast & loose with history in these classic films bug you?