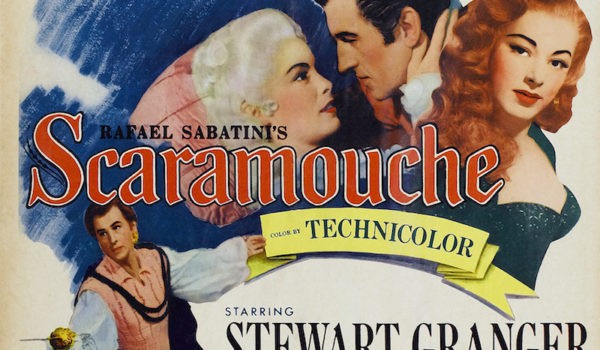 Scaramouche (1952) is a “classic” film that’s been on my list forever, since I saw images of their version of Marie-Antoinette (wearing a costume from the 1938 Adrian-designed film). I finally got a chance to watch it, and I was very entertained!

Here’s your short synopsis: Andre Moreau (Stewart Granger) is the illegitimate son of a nobleman in just-pre-Revolution France. His good friend gets all “liberté equalité ou la mort” and, yes “la mort” (death) is what happens to him. Stewie is pissed and vows to take revenge on the nobleman (the Marquis de Maynes, cousin and secret love of Marie-Antoinette) who killed his bestie. Life being complicated as it is, Stewie is in lurve with a hot redheaded actress (Lenore), but then meets the dewy young thing (Aline, played by Janet Leigh) who is engaged to the Marquis. As things play out, Stewie has to hide out with Lenore’s theater troupe, taking on the Commedia dell’Arte role of Scaramouche, in order to avoid the Marquis’s guards and buy time to train in swordsmanship. Cue film’s longest duel… 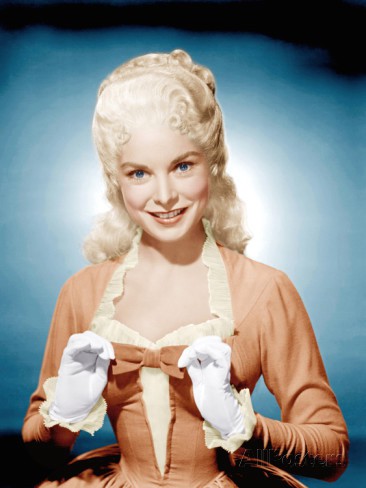 All this being said, it was clear that the filmmakers (including costume designer Gile Steele) were more than a wee bit confused when it came to the 18th century. To wit:

1. 18th century wigs were white because they were POWDERED

Okay, so Scaramouche is taking their cue from many, MANY other early and mid-20th century films when they put all their actors into shiny white wigs. But for one thing, 18th century people primarily used powder to achieve the desired color (which was frequently grey, not white), and so created a matte look — so shine is right out. Secondly, the production uses lace-front wigs, making it look like the actor’s real hair. I was thinking maybe their idea was that EVERYONE had white hair in the 18th century, but then in one (and only one scene) where Aline is shown in bed, she suddenly has blonde hair. There were no lace-front wigs in the 18th century, so, no. 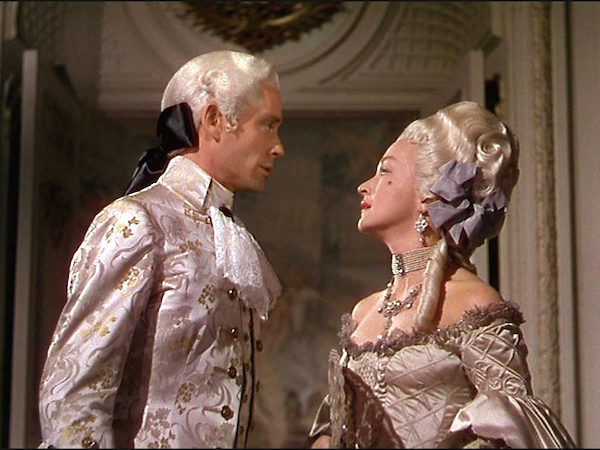 Marquis de Maynes: “My queen, your hair shines like the surface of my toilet after my butler has spent 10 hours scrubbing it!”
Marie-Antoinette: “Oh MARQUIS you do flatter a girl!” 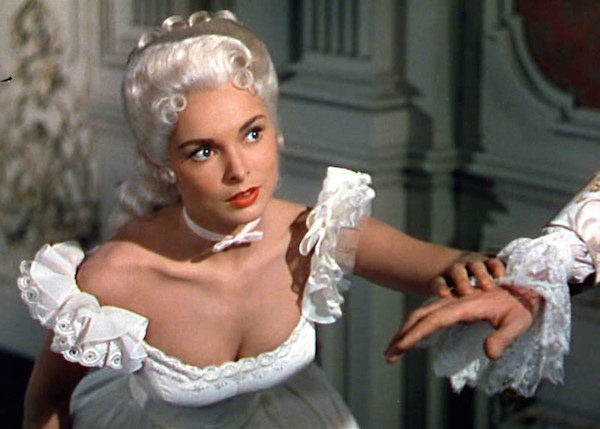 Aline looks like she has white hair (maybe everyone gets REALLY SCARED in the 18th century?)… 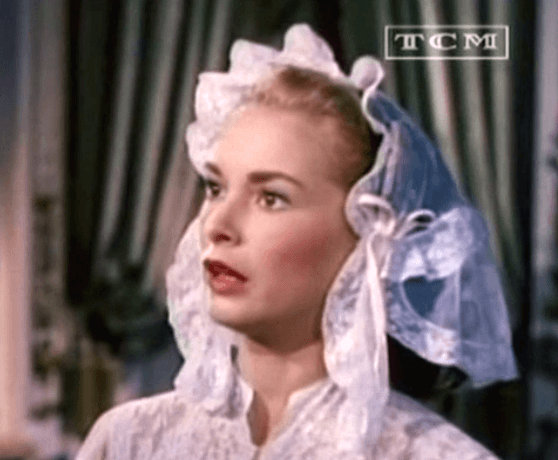 But then when Lenore comes to visit Aline in the middle of the night, we find out she’s actually blonde (oh, and wears 1850s daycaps to bed, but whatever).

2. 18th century men’s pants were NOT the equivalent of leggings/yoga pants

SERIOUSLY, PEOPLE. The Marquis de Maynes gets actual breeches, tight though they are. But Stewie wears what are essentially thick leggings (although, note, he is clearly wearing some kind of athletic cup/padding because there is no package in there). Yes, we know most people think of ye olde timey clothes as “men in tights,” but, no. 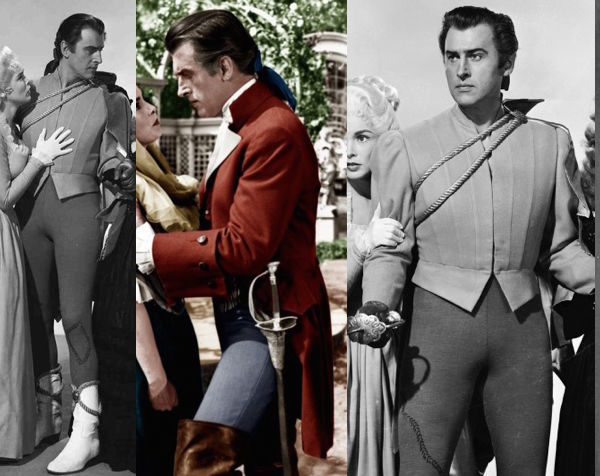 Smooooth as a baby’s bottom…

3. Tabs on 18th century court bodices go UNDER the skirt

Okay, a minor nitpick. Nina Foch as Marie-Antoinette wears a costume from the 1938 biopic, and it’s lovely in a mid-century Hollywood sort of way. But those tabs along the edges of her bodice are meant to be worn UNDER the petticoat, and that’s just how it was done. 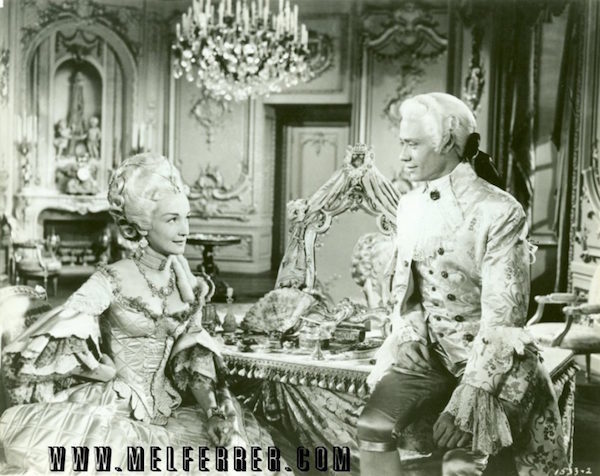 4. Marie-Antoinette did not keep a stable of debutantes in the 18th century

The Marquis de Maynes needs to get married, because of the gossip about his and Marie-Antoinette’s LURVE. So what does MA do? Why, choose a nubile young noble girl from amongst the pack o’ white-Scarlett-O’Hara-dress-wearing debutantes who apparently hang out at Versailles taking dance lessons. 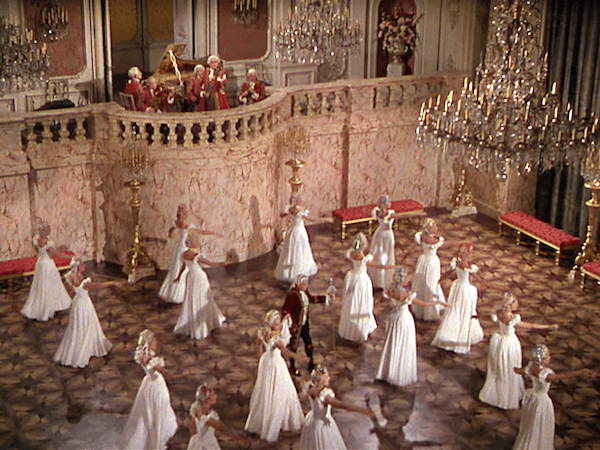 5.  Veronica Lake hair did not exist in the 18th century

Lenore, the actress who is Stewie’s love interest, is fucking fabulous. She’s all tart and sex and red hair and you KNOW I love it. However, while it would be SO great in a film noir, there’s just nothing, nohow that’s 18th century about her long, red, perfectly waved hair. Veronica Lake, yes. 18th century, no.

Lenore knows how to work it! 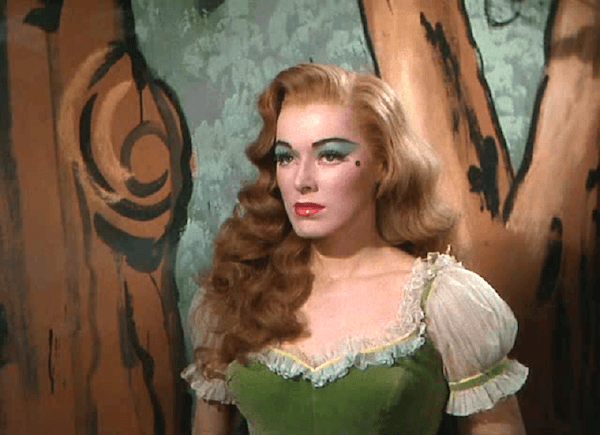 Look at that perfect wave over her brow…

“Next!” (the war cry of all redheads)

5. Blue eyeshadow did not exist in the 18th century

SERIOUSLY, PEOPLE. Neither did cat’s eye liner or thick fake eyelashes, but COULD THEY SMEAR THE EYESHADOW ANY HIGHER??!! 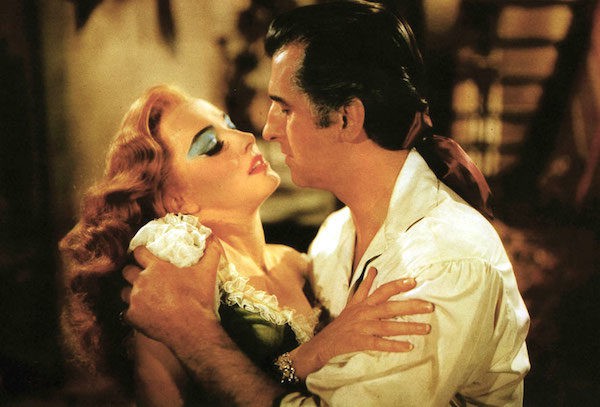 6. Chemise gowns did not look like this in the 18th century:

Scarlett O’Hara might have worn this to a barbecue at Tara, but those princess seams and ribbon lace and purple floral print are just wrongity wrong wrong! 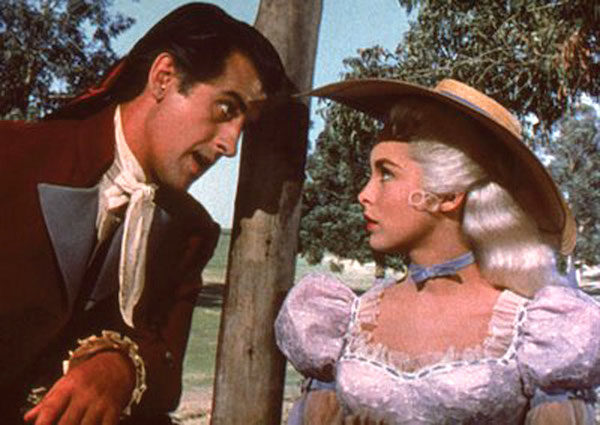 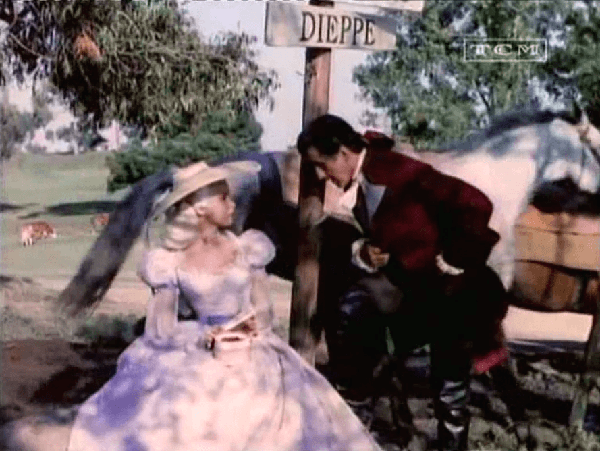 7. Stewart Granger is not hot in any era

I so don’t get him, sorry. I’m not saying he’s not a decent actor, or he can’t rock the yoga pants. But a hottie? Nope. 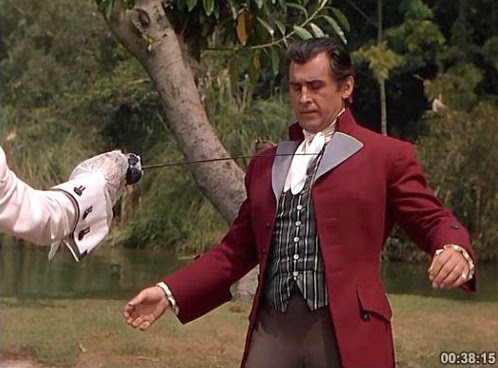 Not when he’s sword fighting. 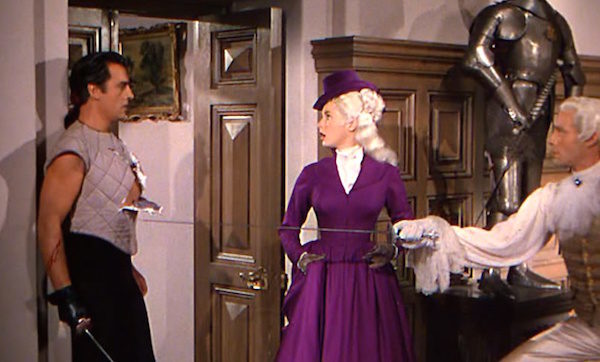 Not when he’s in a sleeveless manly fencing vest. 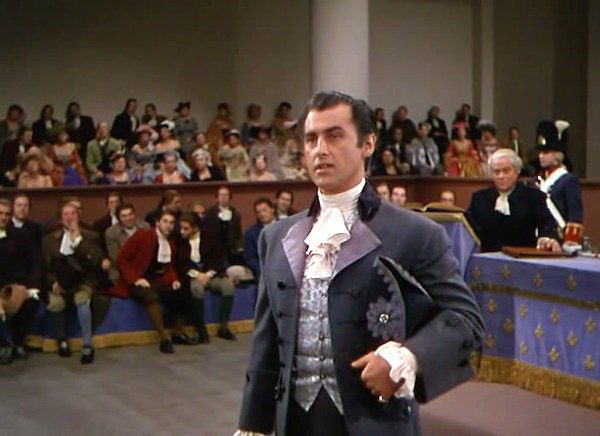 Not when he’s doing his best impression of a man’s man in the French National Assembly.

8. 18th century actresses did not dress like Disney princesses or 1890s showgirls

Oh Lenore. I know you want to get your man, the but secret is not to keep shortening your stage costumes. 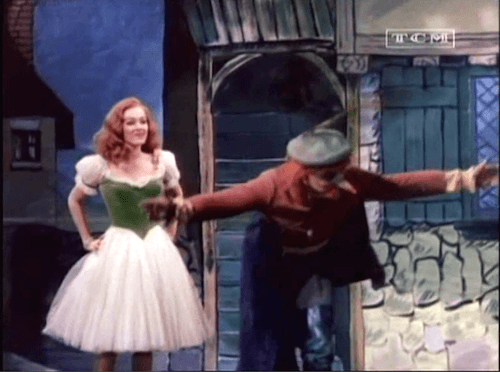 Lenore starts off as a Disney princess ballerina… 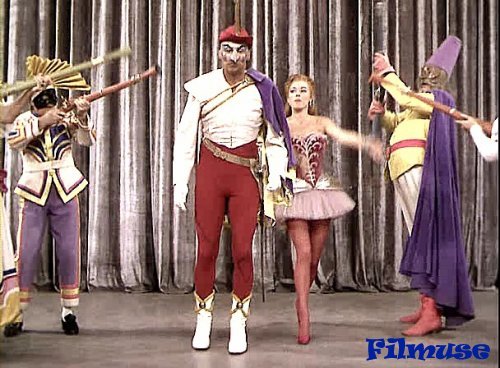 When Stewie joins the troupe, she goes to upper thigh tutus… 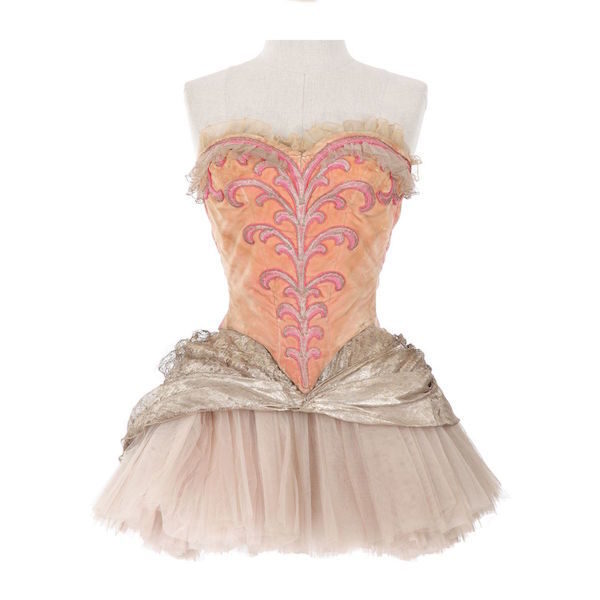 The same costume (the bodice must have faded). 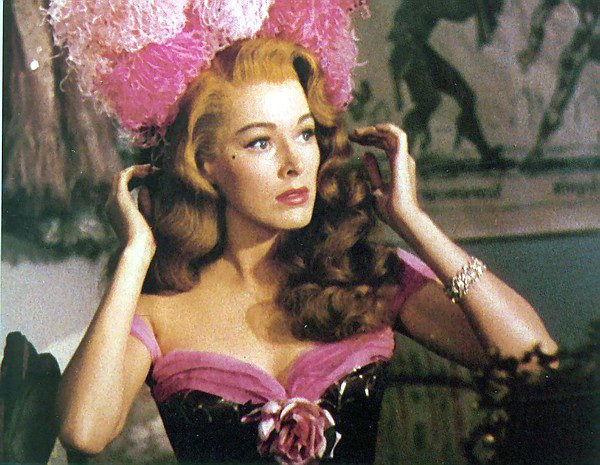 Then when the troupe goes to Paris, Lenore celebrates by breaking out the 1890s cancan feathers… 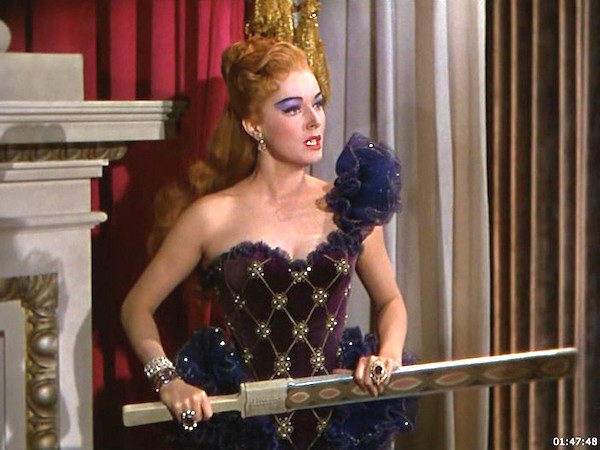 By the end, her costume has shrunk to only one (loofah) sleeve… 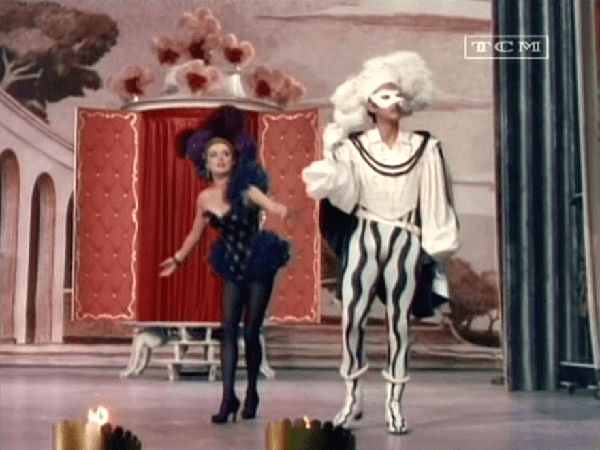 And some hip puffs!

9. Victorian ballgown necklines/sleeves did not exist in the 18th century

In no world, no how did any 18th century European wear an off-the-shoulder neckline, or a sleeveless/strap only bodice. Never happened. Nopity nope nope. Nor did they go 1880s square bustle gown neckline. 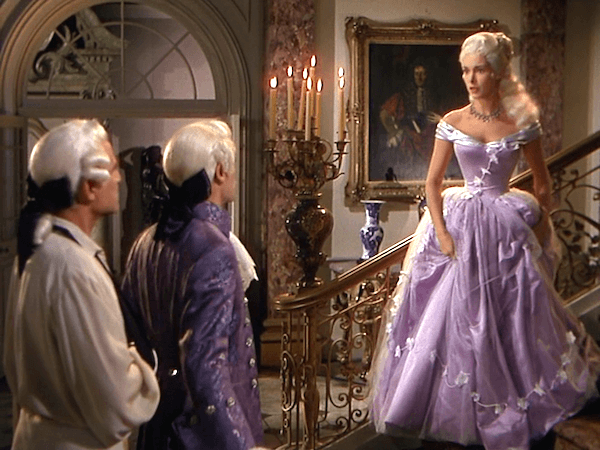 It’s not even Scarlett O’Hara… 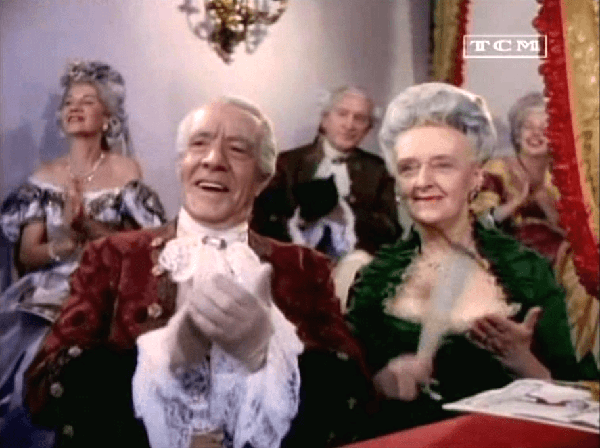 This random extra is very happy about her 1880s bustle gown neckline… (and note another mid-19th century neckline in back).

10. Putting sparkles on these pants does not make them more 18th century

And are those matching boots? 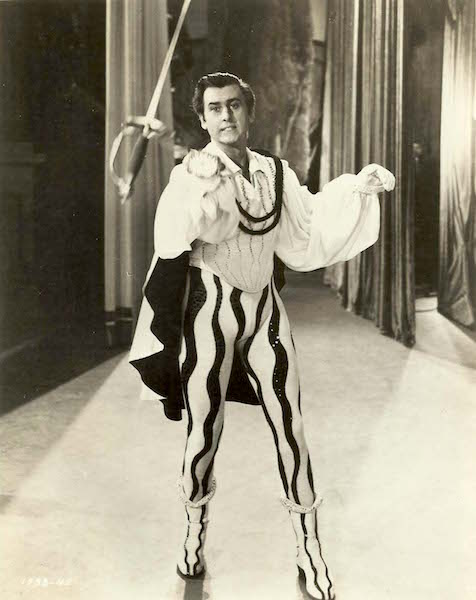 But serious props to whoever made Stewie’s athletic cups and turned him into a Ken doll!

Lenore may not get her man, but she gets Napoleon. I’m not sure how that’s going to work out long term, but it’s more my job to point out that Napoleon at this age would have had long hair. 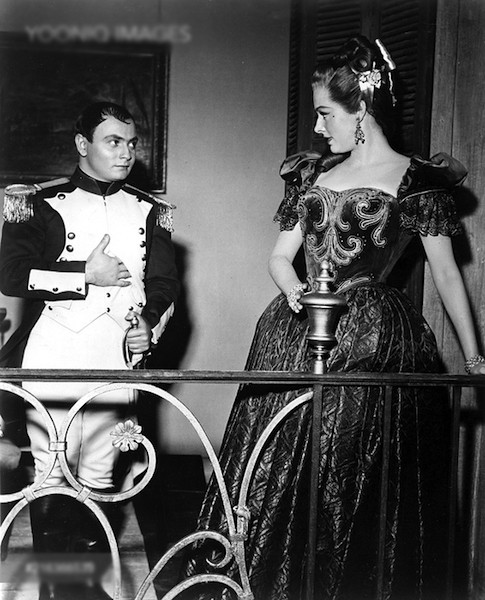 12. Head necklaces are bad in any era 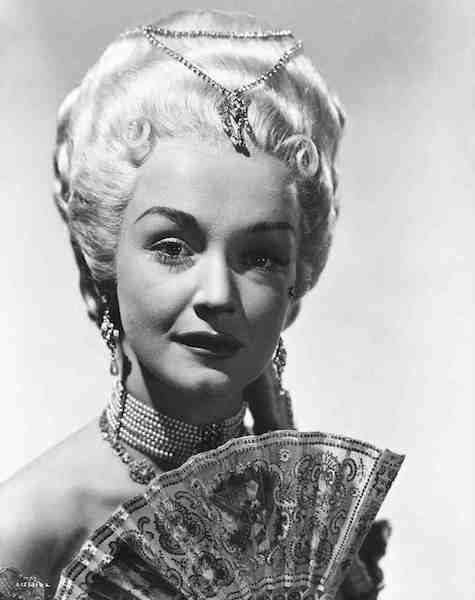 Poor Marie-Antoinette! They don’t let you have real tiaras, do they? (Also, please to be noting Edwardian dog-collar necklace).

And the one thing they weren’t confused about…

If you’re going to cast an actress who has to be in love with the hero, but then give him up all nobly… 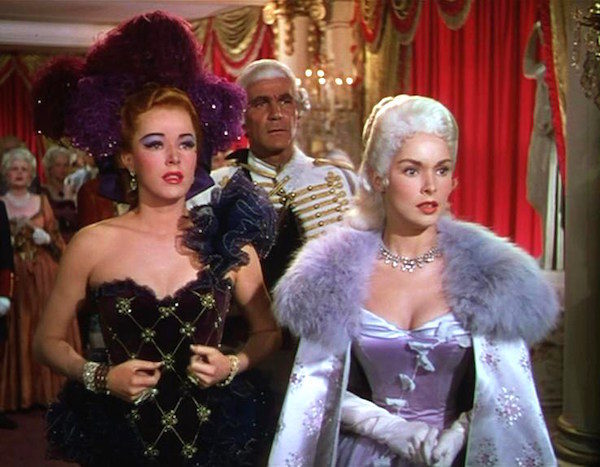 You damn well cast the Baroness from The Sound of Music! 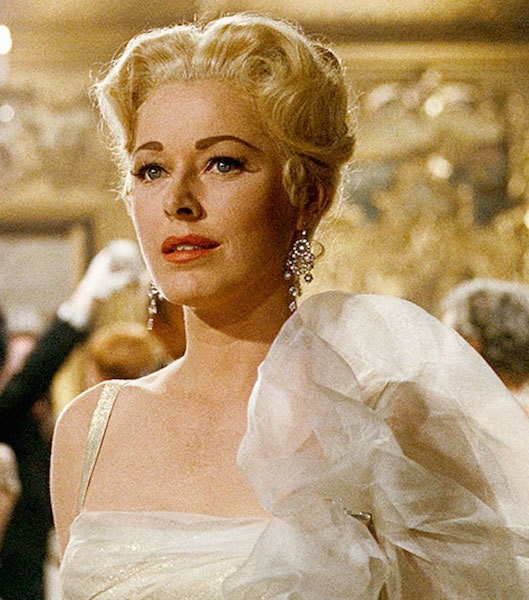 Yep! That’s the same actress who so nobly gave up Capt. von Trapp!

Does Scaramouche get a pass because it’s the 1950s? How un-turned-on are you by Stewart Granger?