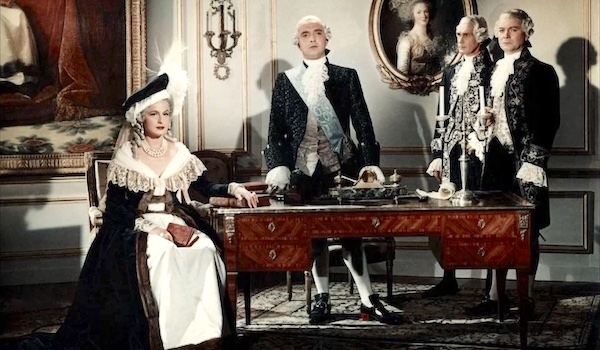 Let’s pick back up 1954’s Royal Affairs in Versailles with part two of this episodic look at French history. This time, we go from Louis XV to Louis XVI, Marie-Antoinette, and the French Revolution, with a little bit as Versailles becomes a museum in the 19th-20th centuries. As I wrote last week when I reviewed part one: I’ve wanted to watch 1954’s Royal Affairs in Versailles (Si Versailles M’était Conté) for years because it features so many key figures from French history. Like many of director Sacha Guitry‘s films, it’s not really a story so much as an episodic look at French history — this time, focused on the palace of Versailles. Four people are credited as costume designers: Monique Dunan (If Paris Were Told to Us, Napoleon), Alex Papin (Napoleon), Maggy Rouff, and Jean Zay (Ruy Blas).

This second part was much more entertaining, and I’m not entirely sure why! Did I understand more of the dialogue? Am I always interested in portrayals of Marie-Antoinette? Do I have a crush on Louis XV? Yes, yes, and yes!

Do you want to read all of this review (with over 3,600 words and almost 50 images) about Royal Affairs in Versailles (1954)? The full post is available on Patreon for our subscribers! Check it out here. We’ll make this post available to everyone one year from today. Until then, only Patreon subscribers can view it! 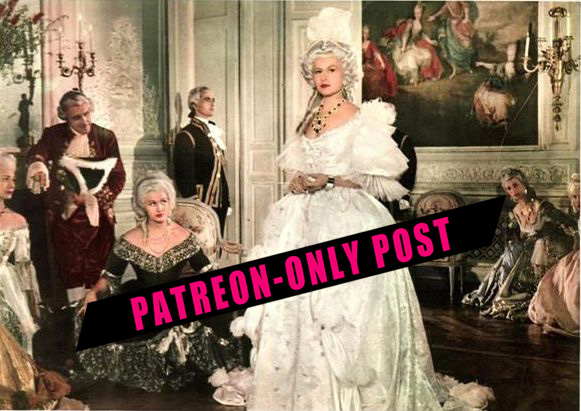