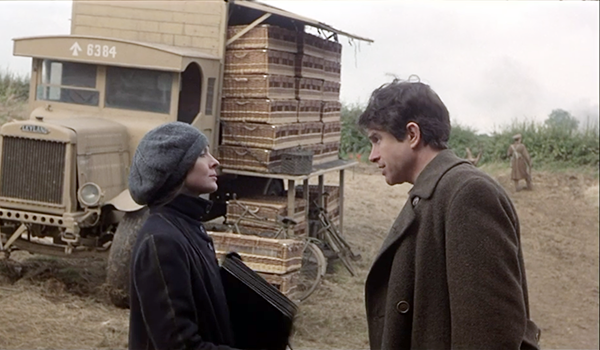 A three-hour movie about American communists in the 1910s and the Russian Revolution might not sound like a crowd-pleaser today, and it wasn’t a big box-office hit back when Ronald Reagan first became President either. But Reds (1981) was a critical success and still holds up as a fascinating historical film.

Warren Beatty had been a little obsessed with the biography of John Reed, a journalist and sometime activist who wrote Ten Days That Shook the World in 1919 as eyewitness account of the Russian Revolution. It took Beatty about 15 years to get his idea on film, eventually writing, directing, and starring in the movie himself. Everything about Reds was a huge production — Beatty took 30 to 50 weeks for shooting all over Europe and in L.A. Sources debate how much film was shot — up to three million feet is estimated, which would be two and a half weeks’ of screen time. Beatty demanded 50 to 80 takes for some shots, frustrating and angering his fellow actors. Vanity Fair has an extensive article about the making of Reds that chronicles what a wild road it was to getting the thing made. 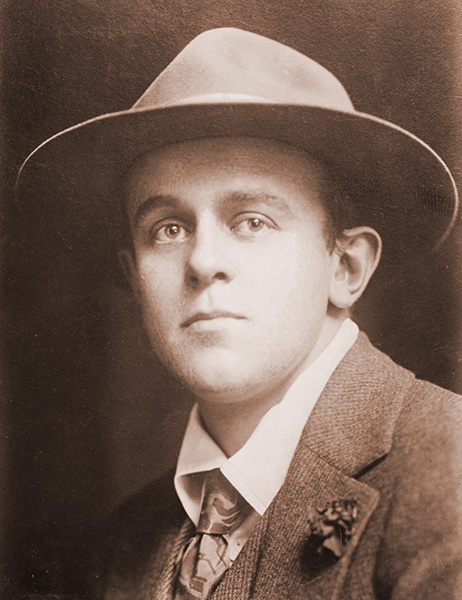 I don’t know if all this really translates to the screen, except that Reds does have a beautiful, sweeping epic look and feel to it. The story, however, is less of the epic Great Loves and Great Battles genre — it’s smaller and more tightly focused, which makes it more interesting IMO. The characters are complex, flawed, realistic, and contradictory, and they weave their ways in and out of extraordinary historical events in a relatively believable fashion.

Reds is based on real people’s lives, but the plot does play a little fast and loose with history, of course. And yet, the film pointedly reminds you that memory — and history? — can be flawed and contradictory too by having essentially a Greek chorus of interviews with some who knew the real people portrayed in this film. These interviewees are referred as ‘the Witnesses’ and they range from novelist Henry Miller to the founder of the American Civil Liberties Union. Their names are only shown in the final credits.

The story starts in 1915 with feminist and aspiring writer Louise Bryant (Diane Keaton) meeting John Reed when he speaks in Portland, Oregon. She’s clearly bored with married middle-class life and Reed’s socialist talk stirs her up. They begin an affair, and she joins him in New York City where he’s part of a liberal, bohemian crowd including anarchist Emma Goldman (Maureen Stapleton) and playwright Eugene O’Neill (Jack Nicholson). This first half of the film explores Louise and John’s romantic relationship and how it’s tangled up with each of their own journalism and artistic careers. While the couple eventually marry, Louise has an ongoing affair with Eugene and John admits to his own dalliances. 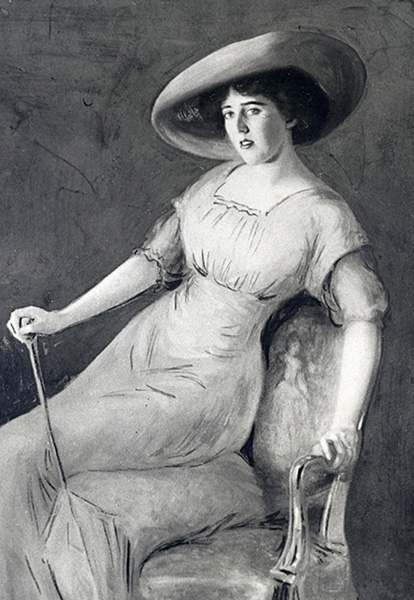 The second half of the film is more focused on the Russian Revolution and how it’s perceived by American liberals and communists. Many of the political discussions among John’s New York friends feel relevant today as they debate capitalism’s effect on workers and women’s equality. They’re hampered by the prejudices of their times and a certain amount of blind idealism that’s still found at both extremes of the political spectrum.

This is a long movie, and I think it could have been edited down a little bit more, but it’s still engrossing as-is. Between the small-scale romance, the historical background, and the complicated politics, I feel like this is the antidote to Dr. Zhivago (1965). Where the ’60s movie dealt in broad generalities concerning Russia and centered a wildly passionate romance, Reds gets very specific about the politics of the period and weaves a quirky, complicated romance in and out of the history.

Also, while both films are going for the ‘sweeping epic’ thing with stunning cinematography, Reds has a lot more historically accurate costumes than Dr. Zhivago! I couldn’t find anything about costume designer Shirley Russell’s work on this film, but she was nominated for both an Oscar and BAFTA for Reds. Her 2002 obituary in The Guardian noted: “She could charm stars into stuff their performances needed for veracity but their vanity feared — look at the revolutionary drabnesses she hung on Warren Beatty and Diane Keaton in Reds (1981), sincere in every seam.” I wouldn’t say the costumes are totally “drab,” but they’re well-suited to the characters in this time and place. 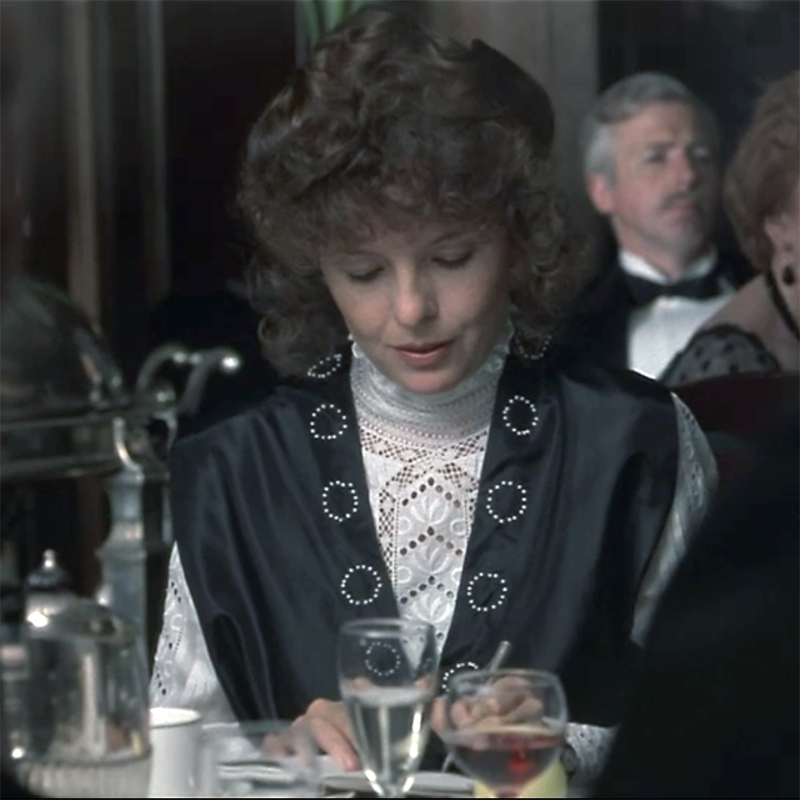 Louise’s fanciest clothes are in the first few scenes in Portland. 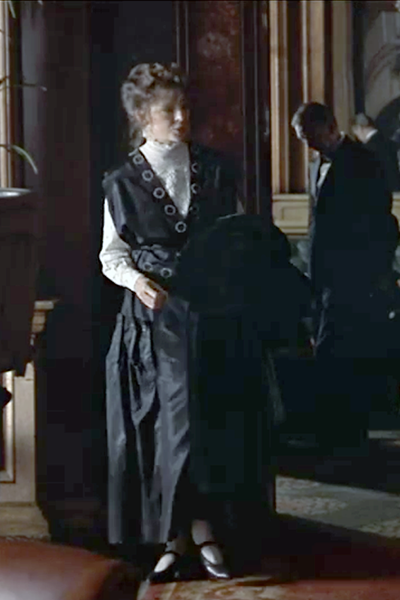 Hard to screencap this skirt, blouse, & vest/tunic outfit, but the versatile pieces are kind of her trademark & give her costumes a very real, lived-in look.. 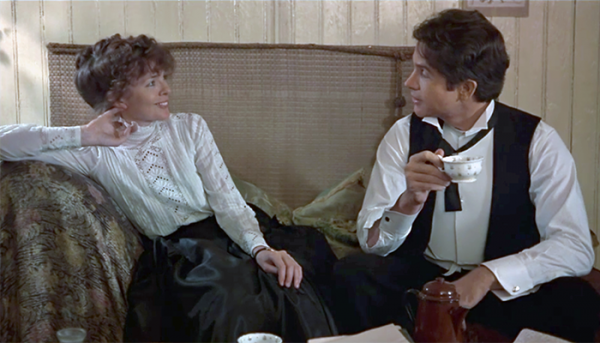 Same outfit, she’s taken off the vest/tunic, as Louise & John get casual. 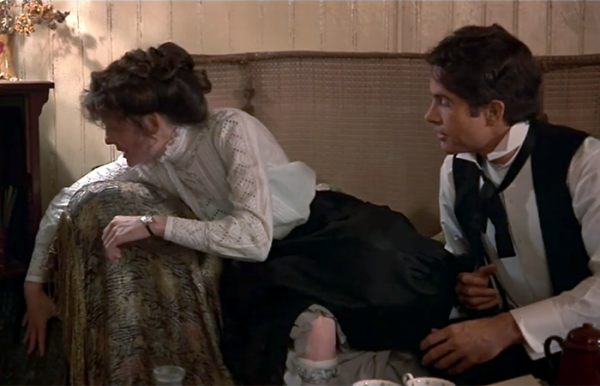 It’s a little thing, but I appreciate that when she reaches over for her writing portfolio, you get a glimpse of her petticoat & stockings held up with garters. That’s both an appropriate historical costume touch, plus it shows how comfortable she immediately is with him. 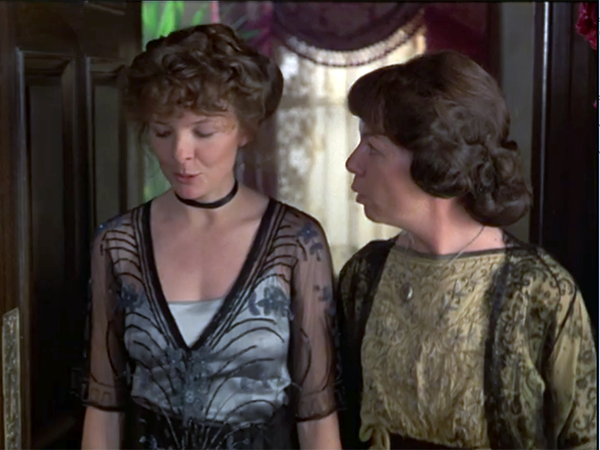 Dinner at John’s mother’s house. Louise would benefit from a corset in this gown though. 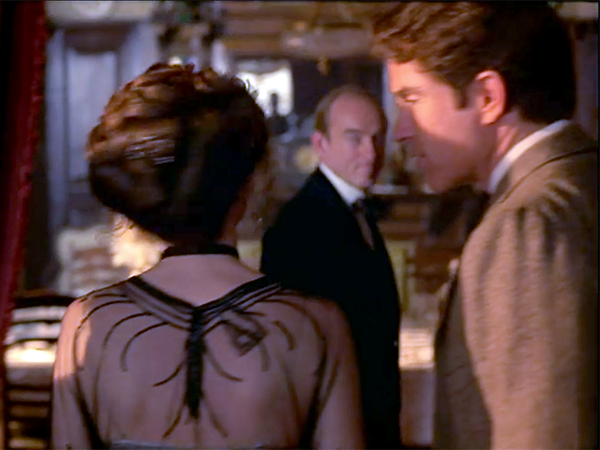 But the back embroidery/beading is gorgeous. 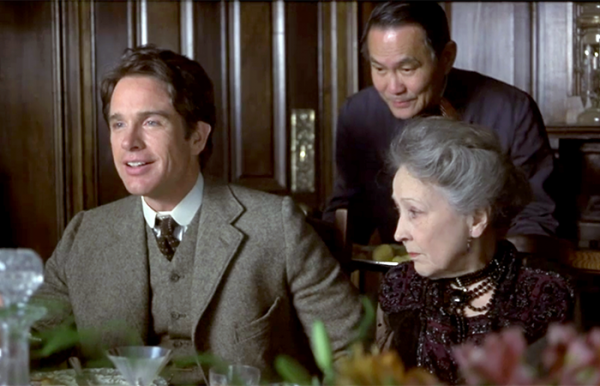 John’s just all tweedy. His mom is old-fashioned. She has a Chinese servant, which is a little sad & telling, since this was during the Exclusion Act period & domestic jobs were one of the few things open to Chinese immigrants. 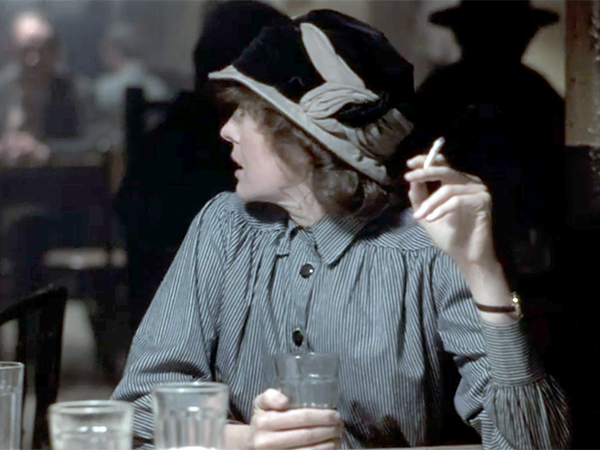 OK, a lot of what Louise wears in NY & Russia is simple, workaday stuff — blouses, sweaters, skirts. But it’s appropriate. Also, she always wears hats outside. Someone knew that Diane Keaton can wear a hat like nobody’s business & did this character right for the period! 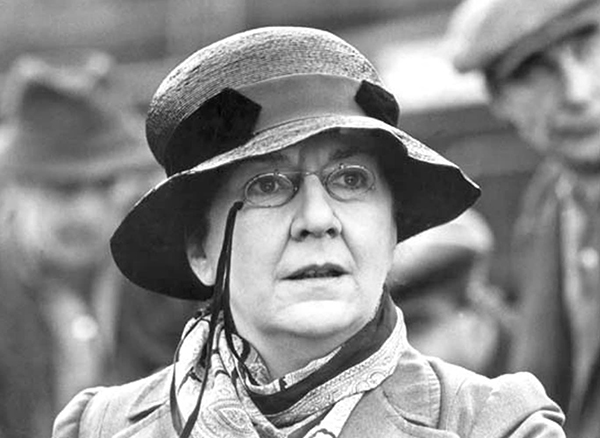 As the only other major female character, Emma Goldman also wears hats correctly. It’s just the leading men that don’t get period headgear. 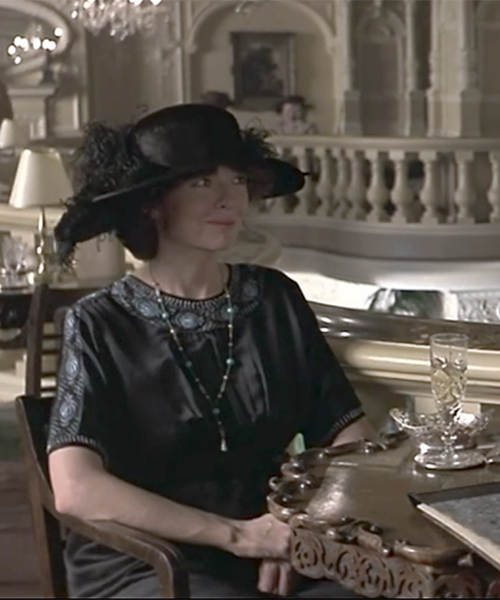 Louise wears this elegant black number to meet with a sleazy magazine publisher. 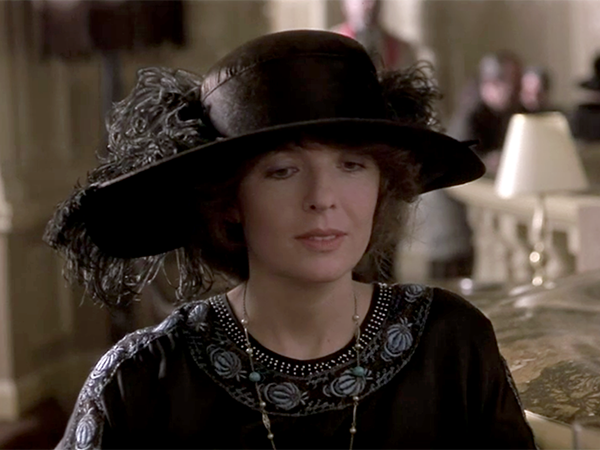 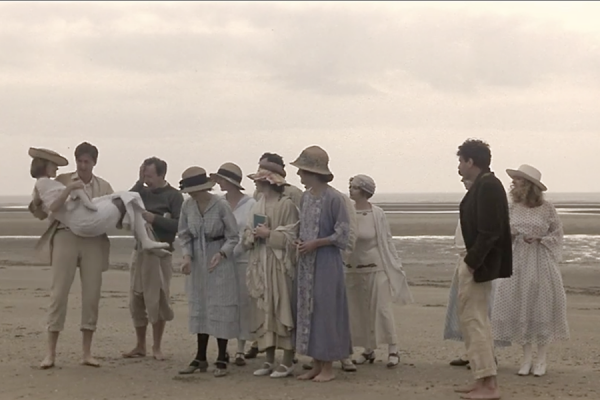 There’s this whole middle part of the movie set at a Cape Cod beach house, where the gang performs their own plays & have sex with each other. 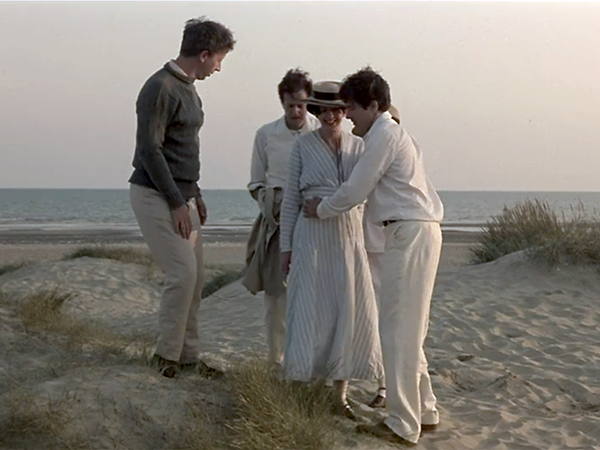 All the pale ’10s outfits are fantastic! 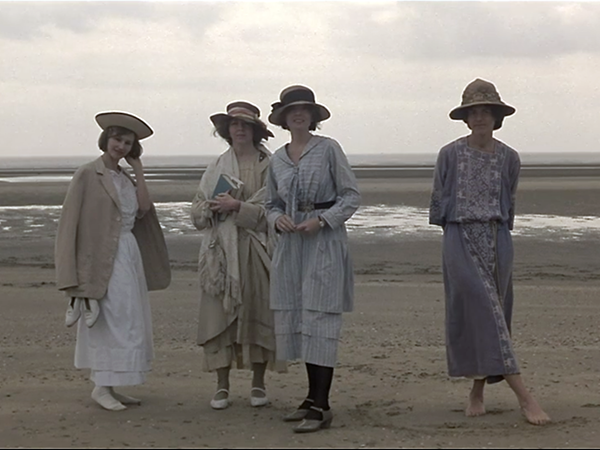 See, all the women have hats, even if the guys don’t. 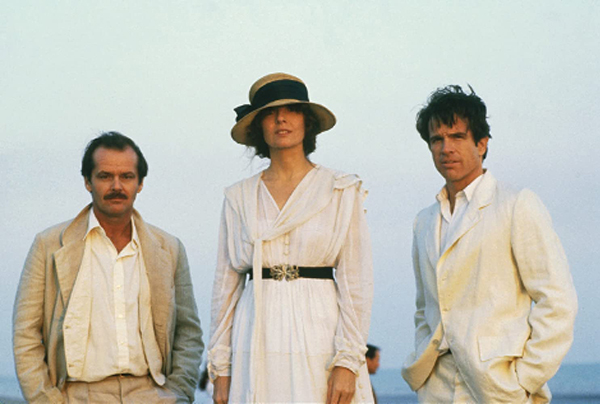 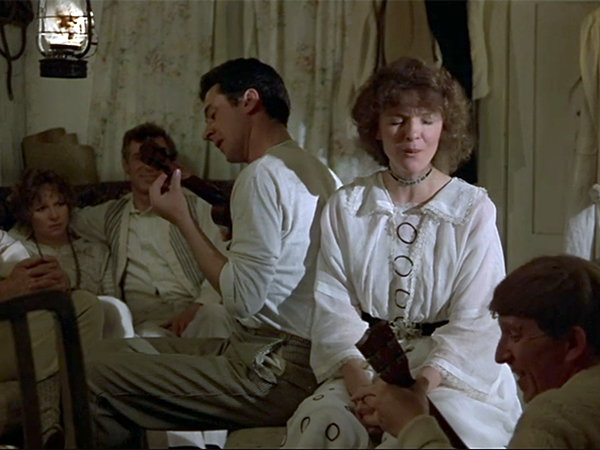 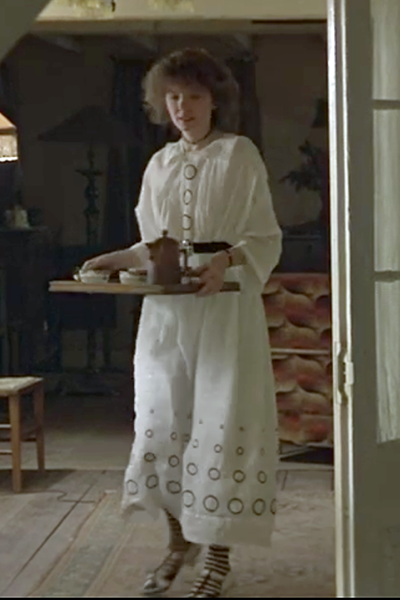 Check out the graduated pattern at the hem! And she’s wearing stripey stockings! 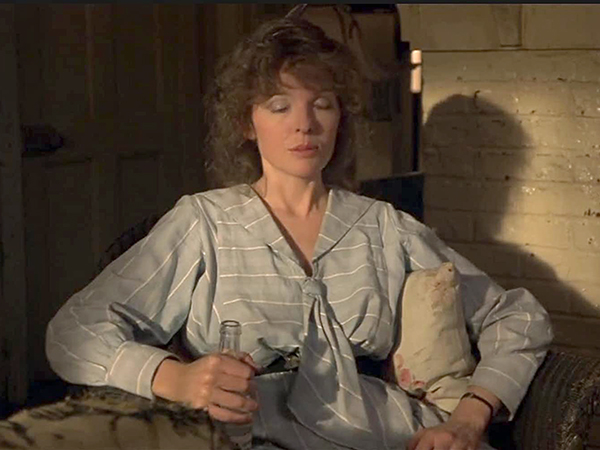 The sailor-style neckline is perfect for the beach scenes. The makeup & hair in this movie, however, are not on-point for the period. 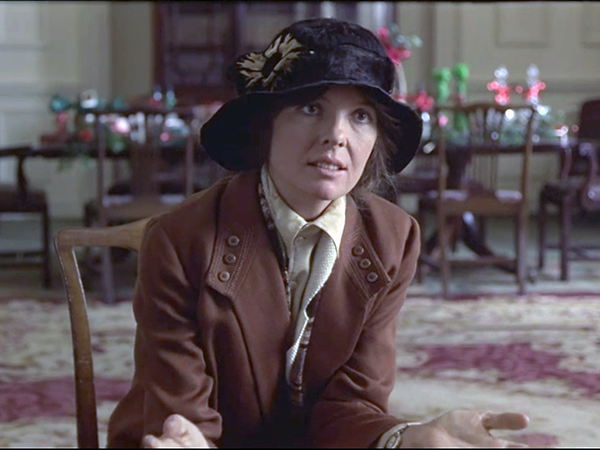 Yeah, the costumes do get darker & more serious in towards the end of the film. But still with period details like that collar & a hat.

Have you seen Reds?