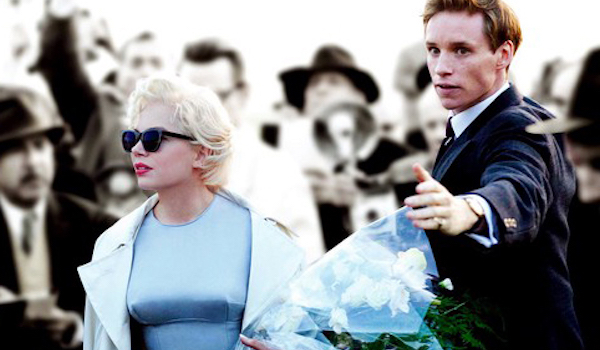 So, backstory time: I watched My Week With Marilyn (2011) YEARS ago with the intention of writing about it here, but for some reason I never did. I kept thinking I had written the post, however, which is why I never actually checked until recently to see if I had covered the costumes — with the recent debut of Blonde (2022), it jogged my memory and I went looking for this post … the one I am apparently writing right now because I actually didn’t write it back in 2017.

This isn’t the first time I’ve gone looking for a post I swore I wrote in 2017 only to discover I never actually wrote the post. My personal life kind of took a shit around that time and, well, here we are.

Vanity Fair published an incredibly poorly-aged interview with the film’s costumer, Jill Taylor (The Mill on the Floss is her only previous frock flick), which I suggest you avoid reading unless you want to be outraged by the way women like Christina Hendricks and Scarlett Johansson are casually fat-shamed, and a choice quote about My Week With Marilyn star Michelle Williams’ ass by none other than Harvey Weinstein. So, in order to spare you the need for blood pressure meds, I will synopsize Jill Taylor’s design choices when it came to costuming for a character as iconic as Marilyn Monroe: They had a limited budget, a tight shooting schedule, and did the best they could with what they had. Michelle Williams had padding added to make her appear curvier and wore a bullet bra by vintage-inspired lingerie brand What Katie Did. Eddie Redmayne wore a lot of starched collars to make him appear more “English” compared to the American characters. They tried to use vintage pieces where they could, but sometimes they had to make entire outfits because modern bodies don’t fit vintage clothes very well. The end.

Despite the dumpster fire of a VF interview, the costumes for the film are well done and definitely evocative of mid-1950s era Marilyn when she was in her prime. The film centers around the production of The Prince and the Showgirl (1956), which is itself a period piece, with Marilyn starring opposite Sir Laurence Olivier. It’s based on the memoir of Colin Clark (played by Eddie Redmayne), an aspiring young filmmaker who lands a job as Marilyn’s personal assistant on the film. 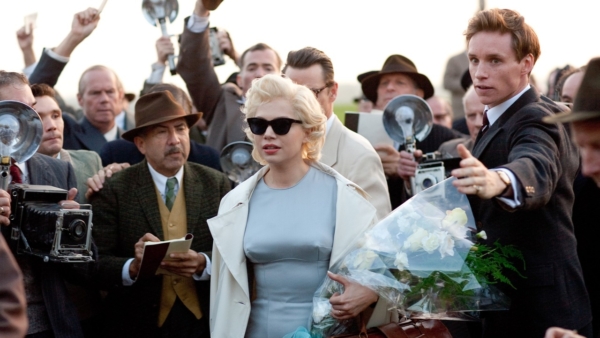 Getting the costumes right was just one part of the process in transforming Michelle Williams into Marilyn. Hair and makeup designer Jenny Shircore had to carefully plan out how to realistically evoke Marilyn without outright trying to transform Williams into a caricature. “You’re not cloning Marilyn; it is Michelle Williams,” Shircore explained in this InStyle interview, “but you have to try and encapsulate the essence of Marilyn, hopefully in a convincing way so that every now and then you think, ‘Gosh, was that Marilyn I just saw?’ We didn’t do anything like false noses, big ears; it all came from Michelle.” 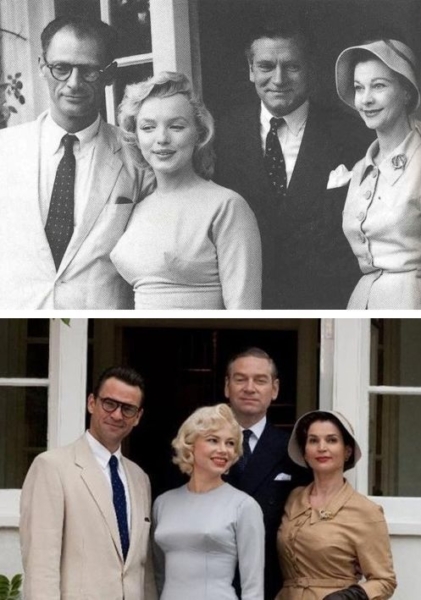 A nice comparison between a photograph of the real Arthur Miller, Marilyn Monroe, Laurence Olivier, and Vivien Leigh that was referenced in the film. Dougray Scott plays Miller, Michelle Williams is Monroe, Kenneth Branagh is Olivier, and Julia Ormond is Leigh. 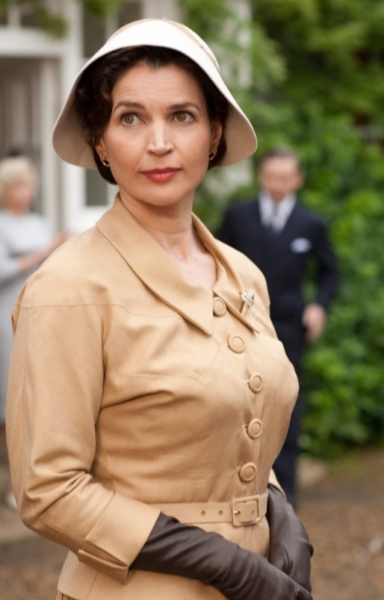 Michelle Williams wasn’t the only actress to require strategic padding to fill out her figure in order to realistically play an iconic actress. Julia Ormand was similarly padded out to create a similar silhouette to Vivien Leigh’s figure. 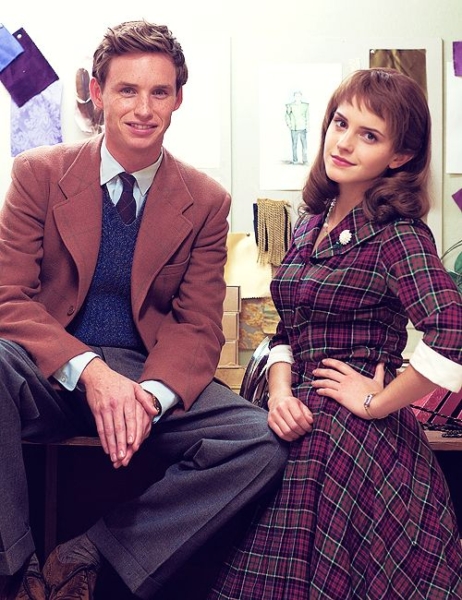 Emma Watson plays Lucy, a wardrobe girl on the set. According to Jill Taylor, this plaid dress was a 1950s vintage piece they sourced for the film. Much of what Watson wears in the movie are vintage dresses, sweaters, and accessories. 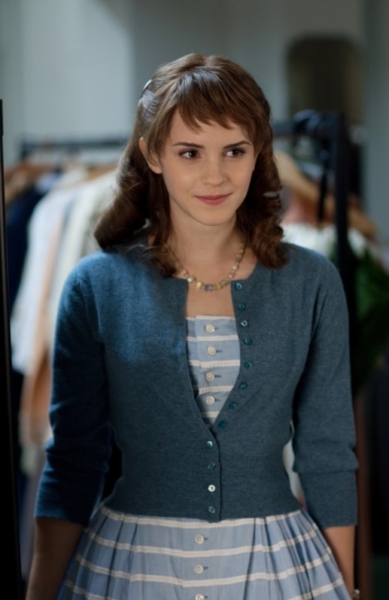 The use of plaids and stripes for Lucy sets her both as “English,” in contrast to the “American” look of characters like Arthur Miller and Marilyn Monroe, as well as creating a visual cue to the audience that she’s not as glamorous as the actresses Vivien Leigh and Marilyn Monroe, who all favor monochromatic color schemes in the film. 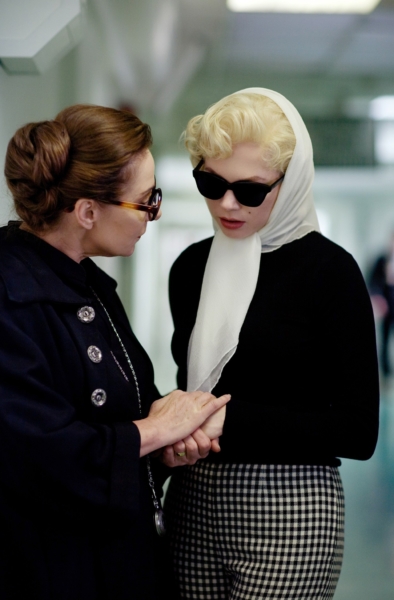 Zoe Wanamaker plays Marilyn’s acting coach, Paula Strausberg. Notice the “American” visual cues on both actresses: monochromatic colors and highly styled hair. Interestingly, Jill Taylor notes that, “What struck me was how [Monroe] was way ahead of her time, in terms of simplicity. I’ve got loads of stills of her in England just riding her bike in a big chunky sweater in a pair of jeans and loafers. Very simple. Very easy. She was a Calvin Klein girl before there was Calvin Klein. That’s the side I wanted to get across in the film.” 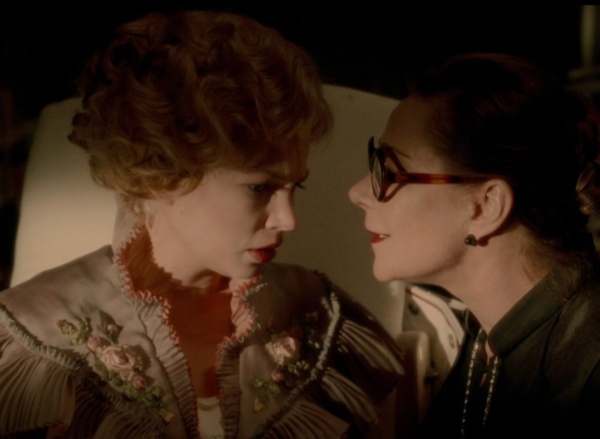 There are a few glimpses of the period “film within the film” that is the central driving force for the plot. Marilyn is in England to film a period piece, starring opposite Laurence Olivier. In the film, she’s not sure if she’s really up to the task of acting beside one of the greatest actors of her era. In reality, Marilyn’s dependence on Strausberg caused huge problems for the production. 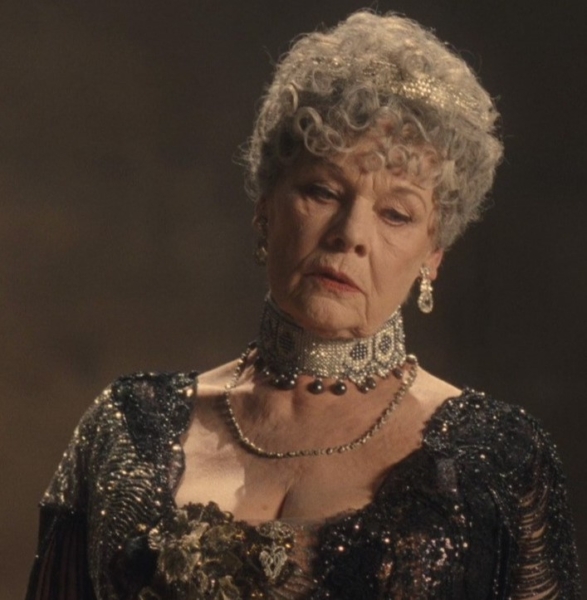 Dame Judi Dench plays Dame Sybil Thorndike, legendary actress of the early film era, who has a role in the film The Prince and the Showgirl as the Queen Dowager (very clearly modeled on Queen Mary).

Some costumes from The Prince and the Showgirl were reproduced in My Week With Marilyn, such as this one.

Overall, I enjoyed the film. It’s chock full of stellar talent, and the costumes indeed hit the mark more than they missed it.

Have you seen My Week With Marilyn (2011)? Share your thoughts in the comments!