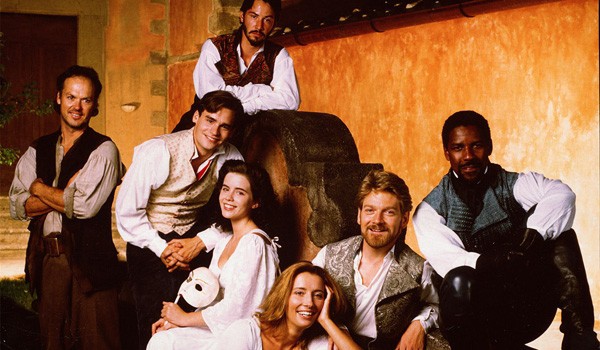 Romantic and sun-drenched, Kenneth Branagh’s 1993 adaption of Much Ado About Nothing was filmed entirely at the hillside Villa Vignamaggio in Tuscany, Italy. This was his last film with then-spouse Emma Thompson (before he cheated on her with Helena Bonham Carter during filming of Mary Shelley’s Frankenstein, ugh). This Shakespeare movie became one of the most financially successful film versions of the Bard’s work ever, perhaps because Branagh aimed to make it “relatable” to a broad audience. Now, fear not, he didn’t dumb down the 16th-century language and make the two sets of lovers Benedick and Beatrice and Claudio and Hero talk in 20th-century slang, thank goodness. But he did strip away a lot of specific historical references in setting and costume in a conscious effort to make the film appear a bit more timeless, even fantasy, than a historical period. According to the Baltimore Sun, Branagh said:

“I wanted this film to reflect how relevant and contemporary Shakespeare is today, and as much as possible I wanted the costumes to be rather vague.”

The costume designer was Oscar-winner Phyllis Dalton, who had worked on several other of Branagh’s films. This ended up being her final work. She told the L.A. Times:

“You were maybe expecting to see it in the Shakespearean period? No, Ken Branagh has a lot of quite strong ideas on the way things should look.”

With all the action taking place in a sunny Tuscan villa, the costumes are appropriately lightweight, without the many layers found in 16th-century garb or trailing skirts of medieval robes. The central male characters are all gentlemen soldiers returning from a successful battle, so they’re dressed in military-style jackets from an indiscriminate period. The main female characters are mostly in pale, flowing dresses from no one specific era. And the hair and makeup are totally modern. It’s a little crazy, but it kind of works. Let’s go through the costumes and try to count all the historical eras they reference, just for fun, shall we?

Our heroines, Hero (Kate Beckinsale) and Beatrice (Emma Thompson), wear full smocks or chemises, full skirts, and corset-like bodices that either lace or button up the front and have peplums at the back and for formal accessions include tied-on sleeves. The colors are all in shades of white / cream / pale yellow. It’s a very renfaire fantasy look that hints at historical styles without hitting any specific dates. Their everyday outfits — Beatrice’s bodice buttons, Hero’s laces. The buttons in the front have an 18th- or 19th-century feel, while the laced front could be medieval through anything! Hero’s “formal” bodice buttons up & has tied-on sleeves in a rather Italian Renaissance fashion, plus the fabric might be a slubby silk. All of Hero’s & Beatrice’s bodices have this style of pleated peplum at the center back, which looks rather 18th-century to me. The only time Beatrice wears sleeves is at Hero’s wedding, so it must be a “formal” look. Yet Hero herself ditches the sleeves at her wedding. Her father, Leonato (Richard Briers), is in essentially 18th-c. middling-class garb. The back of Hero’s wedding bodice has 18th-c. lines.

The other women dress in similar styles, with even fewer details. Ursula (Phyllida Law) has a jacket in the same general cut as Hero & Beatrice’s bodices, but with set-in sleeves. Cartridge-pleating on this lady’s skirt. Just a pile of clothes at the baths!

Our heroes, the soldiers, get a tiny bit of variety in their outfits. They start in uniform jackets with leather pants, then they have a variety of waistcoats depending on the formality of the event (still worn with leather pants though). Suede, really. It kind of looks like denim or velvet, but it’s leather. The cut of the uniform jackets is sometime from the 19th century to the present. This scene always grossed me out — why would anyone get an oily massage while still wearing leather pants??? Strip down to a towel, for frock’s sake! For “formal” but not uniform occasions (like the masked party), each soldier has a damask waistcoat. Most of them, like on Benedick (Kenneth Branagh) are double-breasted in a Victorian style. Don Pedro in a very Victorian double-breasted waistcoat and cravat. Even baddie Don John gets a Victorian waistcoat. Count Claudio (Robert Sean Leonard) stands out a little with a lighter color and a single-breasted waistcoat, although the style is still 19th century. Compare with Leonato behind him in 18th-century fashion. Benedick even obsesses over which cravat to wear. For casualwear, the soldiers have these pale linen, single-breasted waistcoasts. While all three are in lightweight garb, the two soldiers waistcoats are cut in a slightly later period than that of Antonio (Brian Blessed), which is more 18th century.

The older men — Hero’s father and uncle,Dogberry and his crew, plus peasants in the background — wear essentially 18th-century clothing. This is the most consistent clothing period in the whole movie, so it kind of sticks out. The first shot of Leonato (Richard Briers) shows him in light linen and breeches, all in 18th-century styles. They both change into their “formal” outfits to greet the soldiers. Antonio’s double-breasted but longer cut waistcoat is reminiscent of the tail end of the 18th century, while Leonato has a typical mid-18th-century frock coat and waistcoat, all adorned with plenty of buttons. Dogberry’s constabulary men are kitted out in 18th-century gear.

But really, it’s just a renfaire party, isn’t it?