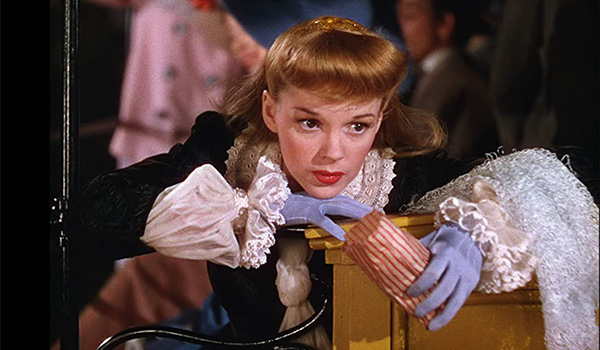 Hardly a week goes by when I don’t sing a cat-themed version of ‘The Trolley Song’ while feeding my two cats their breakfast, so I’ve long wanted to do a proper full review of Meet Me in St. Louis (1944). I even thought I’d make this a Patreon review with scads of screencaps and historical research. But as delightful as it was to rewatch this classic, I couldn’t make myself do all the extra work for this post because I’m dragging from both pandemic flux syndrome (that’s a thing, you may have it too, sorry!) and some asshole nitpicking a dumb joke on one of our posts last week.

How many times do I have to remind people that we do this for fun, in our free time, almost entirely for free? Also, we may offend you! We make all kinds of silly jokes, we use swear words, we are pretty goddamn irreverent. If you don’t like it, just move right along. If you think us saying “blah” is prejudiced against “blahs,” we don’t fucking care! Just go away, don’t use our blog as your little soapbox to defend the rights of “blahs” (oh and don’t personally insult us while you virture-signal, m’kay?). FWIW, we strive to be as hella inclusive as three white and white-passing, middle-class, over-educated, left-coast chicks can be. But we’re gonna make random jokes that are not always kind and loving and courteous to all creatures under the sun because the root of humor is pain (well that’s what I learned in college anyway). So because of last week’s whiner, the rest of you fine folk who aren’t assholes unfortunately don’t get as full a review of this amazing musical. Sorry, my tank is running on bitter fumes right now.

Well, how about this classic technicolor musical? It’s very specifically set in 1903, being the year leading up to the 1904 St. Louis World’s Fair. Costume designer Irene Sharaff tried hard to give a turn-of-the-last-century look to everything worn by the four Smith sisters. It’s really the hair and makeup that trademark it as 1940s.

Judy Garland, as the second-oldest daughter, Esther, whose love life much of the plot revolves around, first appears in this jaunty tennis outfit. She’s just stinkin’ cute as a button in stripes head to toe. 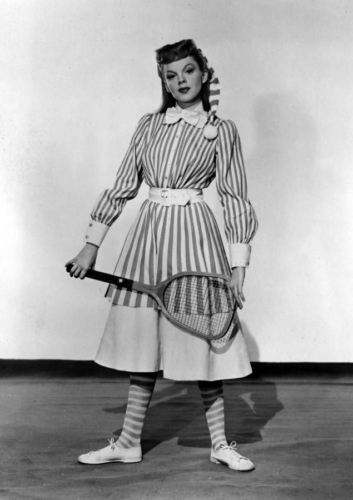 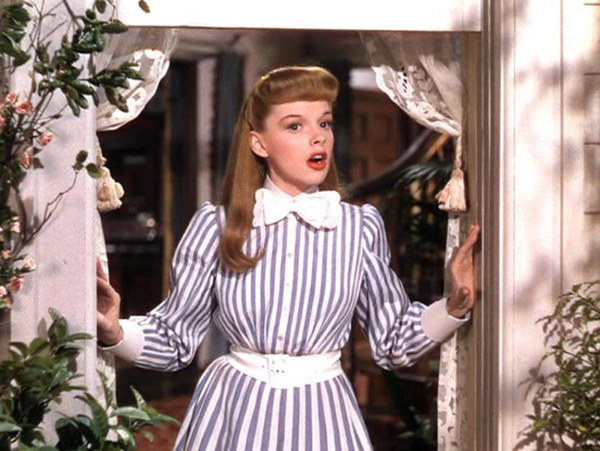 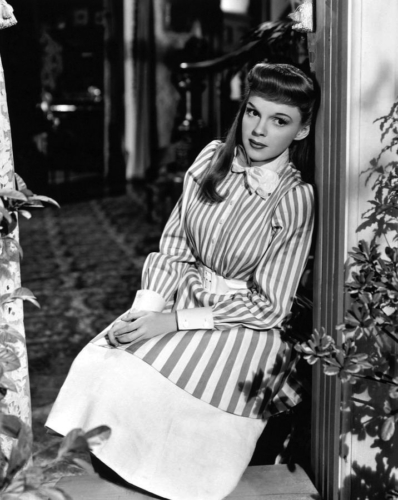 Her older sister Rose (Lucille Bremer) is prissy in her shirtwaist outfits, but she does get some nice period-style detailing. 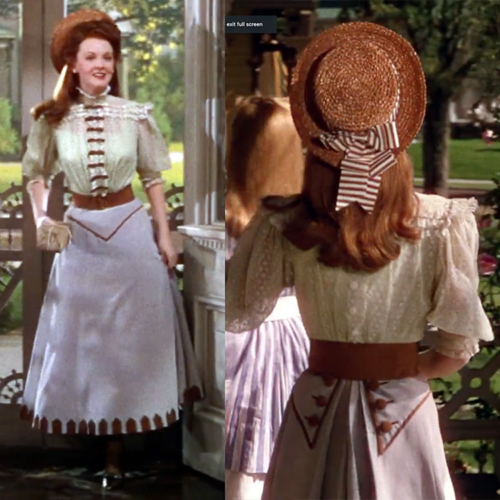 Mom and the maid look appropriate, if unexciting. Also, kitty! 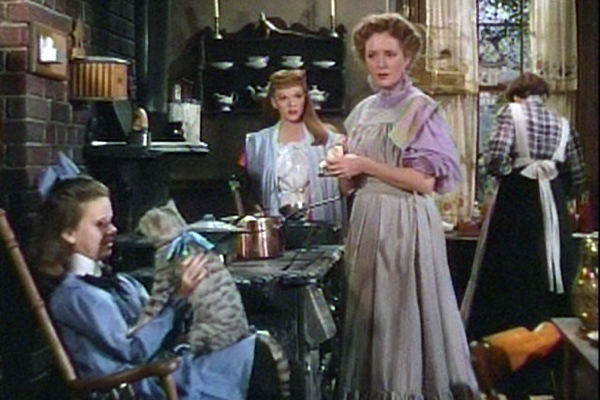 The first really big musical scene is the party they throw for their brother Lon, who’s going away to college. All the local gang comes over, and song-and-dance numbers break out. 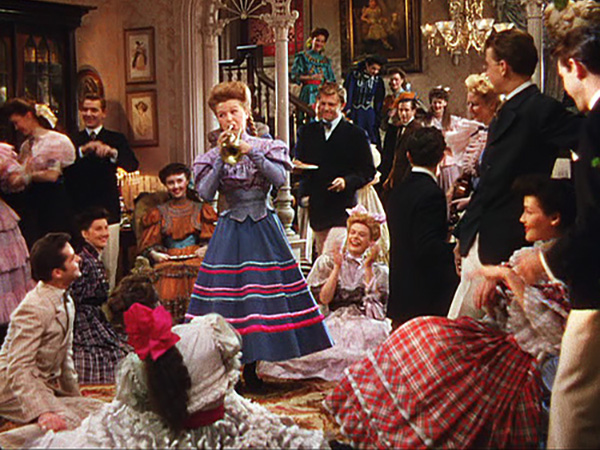 This chick in the fabulous striped skirt brings her horn. 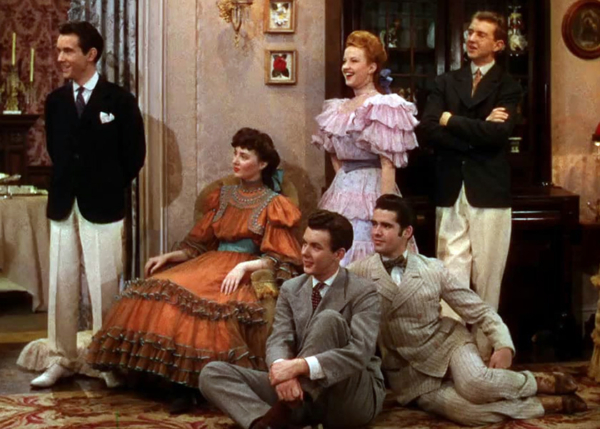 Esther & little sister Tootie (Margaret O’Brien) do a number together. 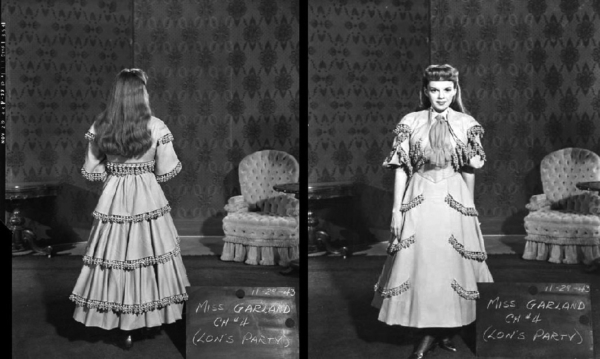 Screen test for Judy’s costume. I freakin’ love all that fringe!

Let’s face it, if you don’t love ball fringe or breaking out in song, you won’t like this movie. Speaking of songs, here comes my fave!

There’s your earworm for the day. You’re welcome! 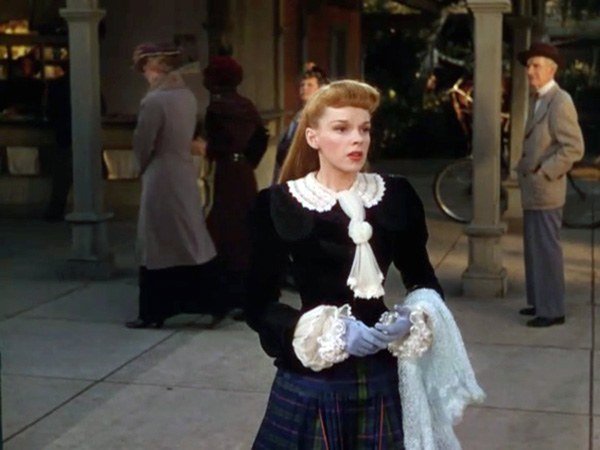 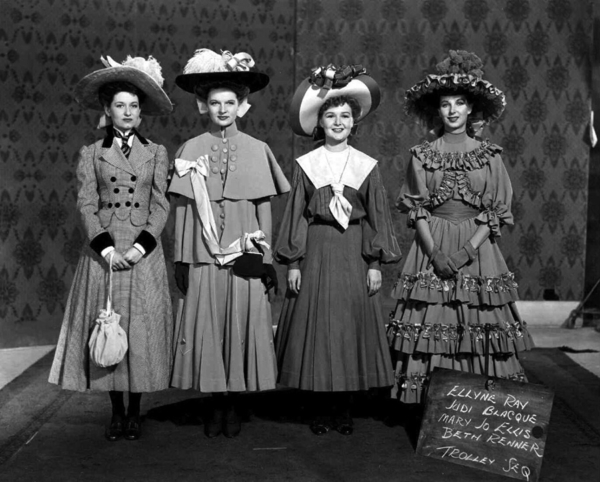 Test shot for costumes of some of the trolley passengers. Nice take on the period with appropriately gigantic hats.

Everyone remembers this movie for its final Christmas scene and song, but many forget the truly insane Halloween scene neatly tucked in the middle of this movie. Families let their toddlers and grammar-school-age kids out to wreak havoc in the streets. No mere trick-or-treating, oh no. There’s raging bonfires built of furniture, they threaten to kill neighbors, and they try to overturn the town’s public transit system. No helicopter parents in sight. 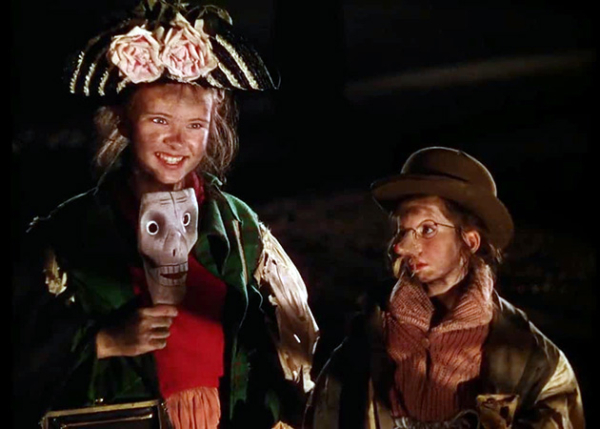 While their little sister is out training to be a hoodlum, Rose and Esther just chill at home, bitching about boys. 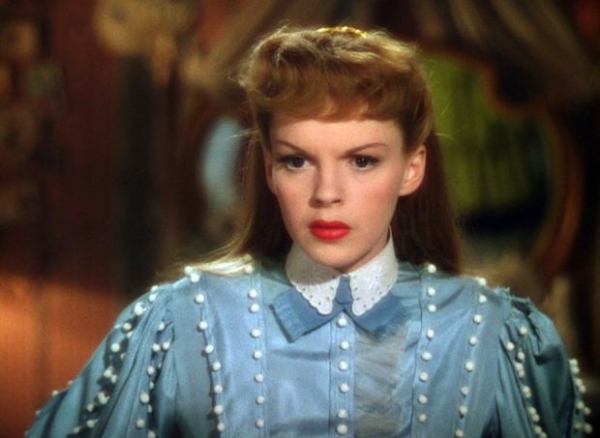 Did I mention ball fringe? 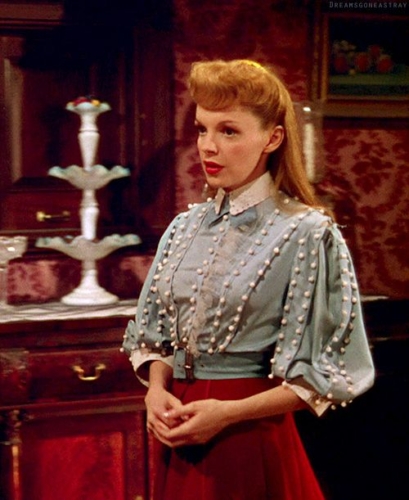 It’s a really cute blouse. Especially if you like ball fringe. 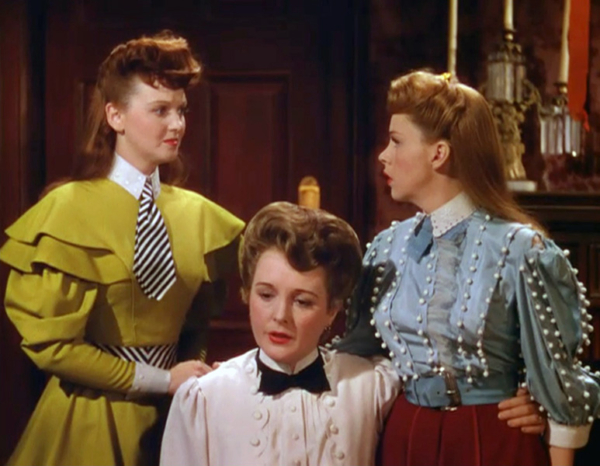 Tootie tries to pass off her wild shenanigans on booze (who doesn’t). Halloween is also when Dad tells the family that they’re all moving to New York City and, darn, they’ll miss the World’s Fair, making the whole point of this movie moot.

While these weird kids sort their shit out, time jumps forward to Christmas. The fam builds a yard full of snowpeople (who will come to tragic destruction), and then there’s a big formal dance ball in town. 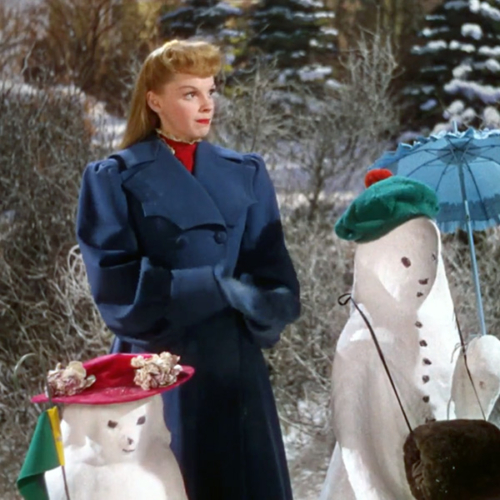 They dress up their snowpeople in regular people clothes — what, doesn’t everyone?

Dress Esther wears under her coat in the snow. Pic from Debbie Reynolds auction catalog.

Getting ready for the ball, the older sisters indulge in some corset cliches. Esther hasn’t worn a corset before (the hell?) so Rose laces her up and yanks it tight. sigh 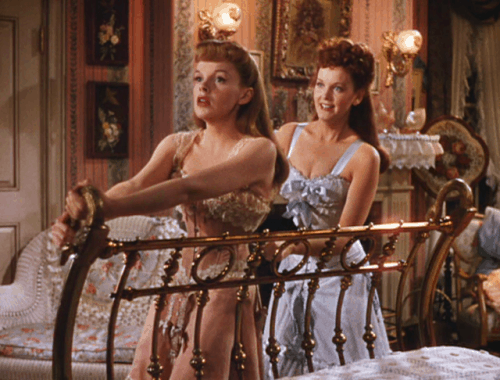 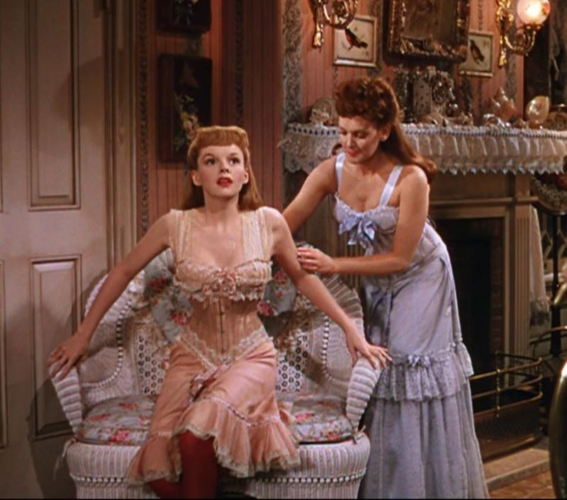 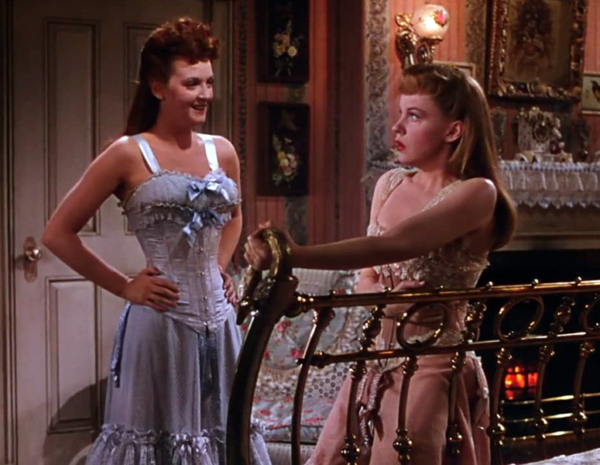 Here’s when I should insert something relevant about how the studios starved Judy Garland and pumped her full of pills to make her skinny as a young girl. It was shitty and there’s some kind of analogy to this scene, but y’all are gonna have to look it up for yourselves this time.

There’s a big kerfuffle about the ball and everyone’s dates and dance partners. Kind of silly, but that’s this kind of flick. Here’s Esther in her gorgeous 1940s, er, 1900s evening gown. When the original dress was on display at a St. Louis museum, it did look a bit more historical — check out the article. 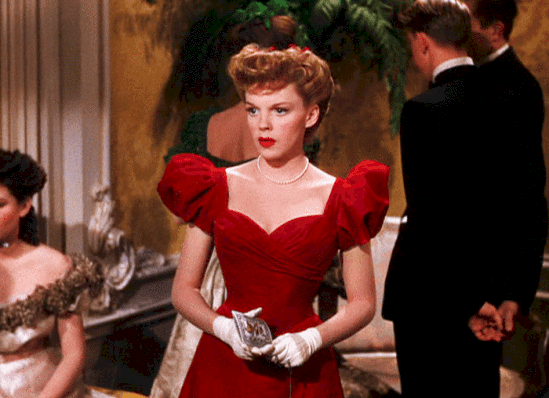 After the ball, Esther sings the saddest Christmas song ever (the original lyrics were even sadder!). 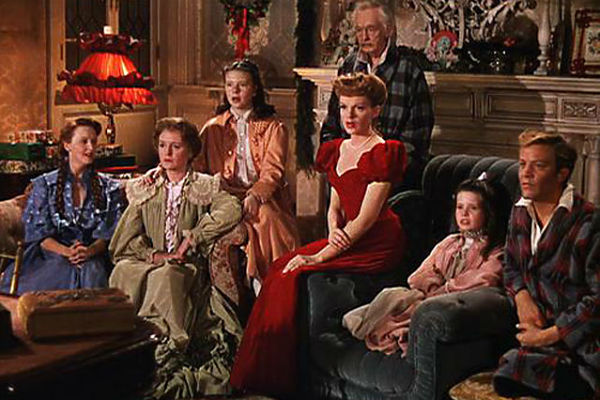 Guess it was sad enough to change Dad’s mind — the family is NOT moving to New York! So everyone can stay, the girls can hook up with their boyfriends, and it’s on to the World’s Fair in frilly white dresses. 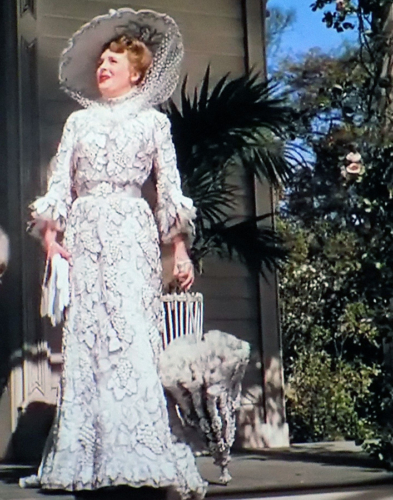 Mom gets perhaps the most Edwardian dress in the entire flick right here! 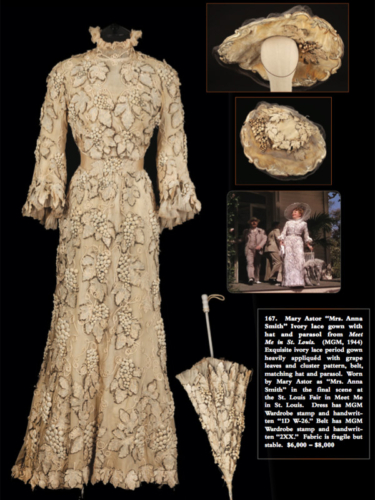 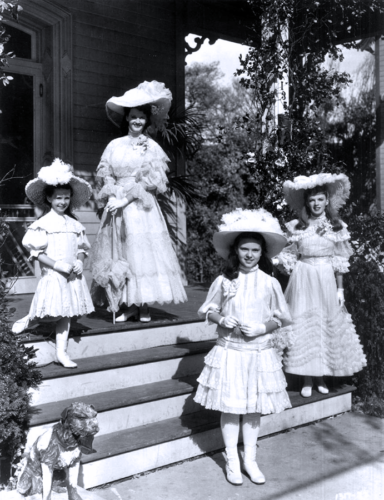 All the girls, ready for the fair. 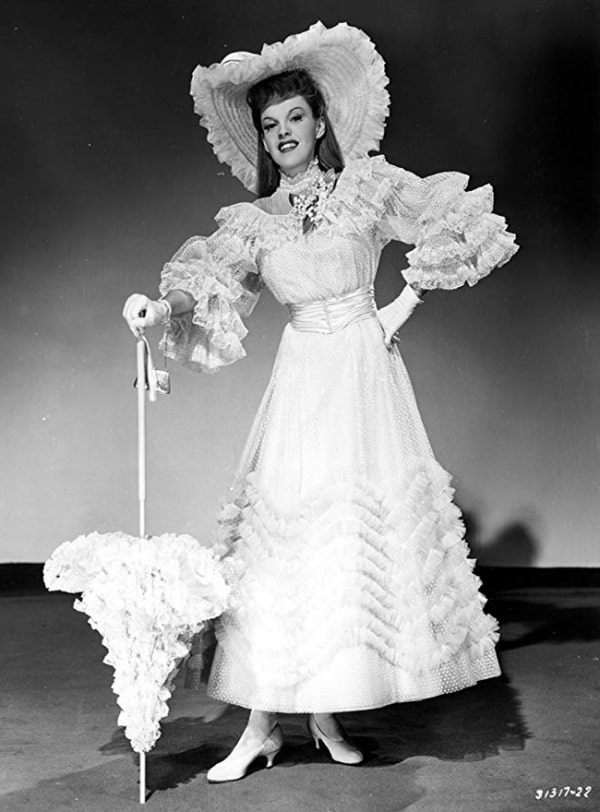 Esther in her fair-going glory!

Is “The Trolley Song” stuck in your head now?