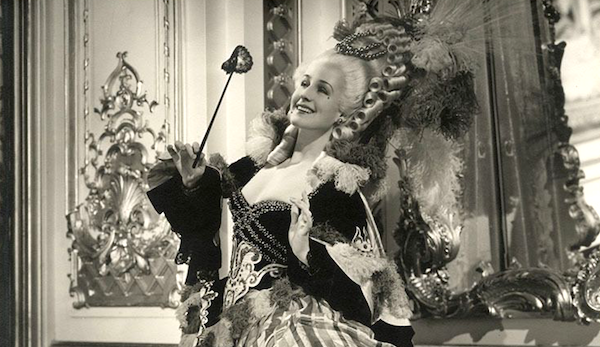 How the hell does a historical costume-focused blog review the film Marie Antoinette (1938)? Adrian designed between 2,500-4,000 costumes for 150 cast members and about 1,250 extras; lead actress Norma Shearer alone had 34 gowns and 18 wigs. I’ve had this film on my to-do list for months now, and I keep putting it off because it’s So Huge. I rewatched the film last night, and decided to settle on the historical influences in Adrian’s over the top, classic Hollywood glamour-infused designs. Because they’re there! Hidden amongst layers of floof and millions of sequins.

First, we’ve touched on aspects of this film multiple times, so I’m not going to reinvent the wheel. I stand by my overall summary of the film, and add that the chivalric romance with Count Fersen is probably very overdone. I’m also not going to get into the hair, which I’ve analyzed for its fabulosity and its historical accuracy. Nor am I going to get into the men’s costumes (designed by Gile Steele), although you can see some of the best on the foppy and evil Duc d’Orléans; or hunt down more in-color images of the costumes on display or when they were reworn in DuBarry Was a Lady since we’ve already touched on both.

Instead, I’m going to give you a little background on Adrian’s design and making process, and then talk about the historical references in Norma Shearer as lead character Marie Antoinette’s gowns!

Do you want to read all of this review (with over 2,000 words and over 40 images) about Marie Antoinette (1938)?  The full post is available on Patreon for our subscribers! Check it out here. We’ll make this post available to everyone one year from today. Until then, only Patreon subscribers can view it!