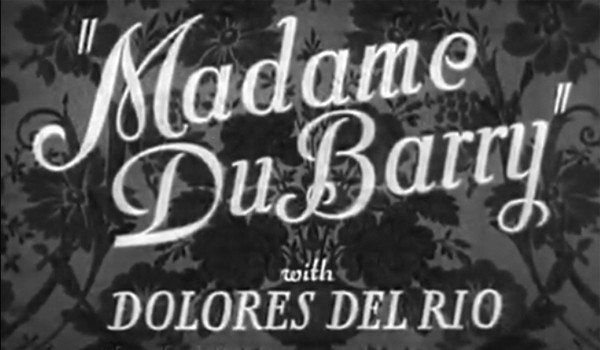 That’s not the name of the film — but Madame Du Barry from 1934 starring Dolores del Rio as the notorious mistress of King Louis XV of France seems to have gone missing. I can’t find this film anywhere in any medium! I’ve been scouring eBay for ages, and it never turns up. Don’t even talk to me about streaming digital copies, that appears impossible. No library VHS, no shitty screengrabs on YouTube (nothing longer than 2-minute clips, at least). I’ve had a TiVo alert set in case Turner Classic Movies plays the film at some point, but nothing showing yet

Here’s why I’m so intrigued by this black-and-white box-office flop: Are you getting what I’m getting? Yeah, it’s Orry-Kelly in prime Orry-Kelly-ness doing historical-ish over-the-top fabulousness, with the stunning Dolores del Rio at the heart of it. The film was apparently a light romantic comedy that got in trouble with the Production Code of the time for bawdiness, but blah blah blah, I just want to see these costumes! This black dress is my everything — but I can’t find a full-length picture! Look how she stands out in this gambling scene. And the dress was used in many of the movie posters. Then there’s this series of promo photos in a white dress with sparkly trim and lace sleeves. No idea where it shows up in the film though. But, dayum, this is a fantastic look, mixing 1930s makeup with 18th-century fashion. It’s very Orry-Kelly to mix gold lame and black fur. With a splash of feathers. And the settings, btw, do not suck. There are apparently other women in this movie. They do not hold a candle to del Rio. Even if copies of the film aren’t available, at least I have all these promo pix of the gowns. That’s the king, waiting on his mistress. Lastly, du Barry’s “nightgown” (clearly a 1930s-style dress) from a scene that was censored by the Production Code during the movie’s first run.

The most significant clips I’ve found of the actual movie Madame du Barry are the trailer:

And here’s the infamous “nightgown” scene: