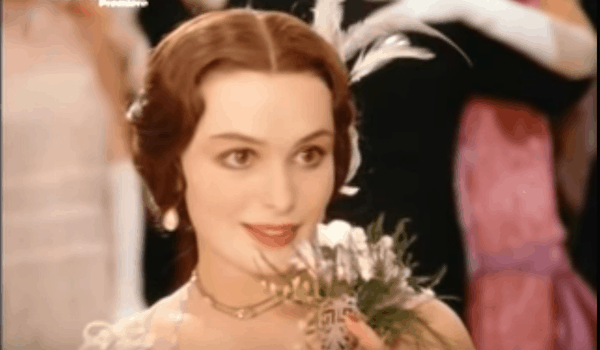 Gloria Vanderbilt (1924-2019) recently passed away, and the news reports made me realize I didn’t know much about her besides 1. famous last name and 2. jeans. Cue a Wikipedia read, in which I learned about the custody dispute in which her aunt (Gertrude Vanderbilt Whitney) tried to take her away from her mother (Gloria Morgan Vanderbilt) in the 1930s… and then I saw it: TV MOVIE BIOPIC. I love nothing more than a good biopic, and since it was filmed in 1982 I was hoping for a high cheese factor, ESPECIALLY when I saw the title: Little Gloria … Happy at Last. Apparently that’s taken from a book written about the custody dispute, so I guess we can’t blame the filmmakers. Plummer is dapper and charming.

The movie focuses much more on Gloria’s mother (Lucy Gutteridge) which, thank god, because young Gloria (Jennifer Dundas, who also played the young Anastasia in Anastasia: the Mystery of Anna) mostly just gets to scream annoyingly a lot. It’s decently entertaining, in a soapy 1980s-biopic way, starting with Mom Gloria meeting dad, getting married, having Daughter Gloria, and then the whole custody dispute. Also, you haven’t lived until you’ve seen an older Angela Lansbury 1. erotically carving a statue of a naked man, and 2. getting fluttery and smoochy with her secret lover. Plus you get some hilarious cameos by early-80s actors, like Michael Gross (the dad from Family Ties) as a lawyer.

The costumes were designed by Julie Weiss, who’s done some big modern-set movies, like Steel Magnolias, Twelve Monkeys, Fear and Loathing in Las Vegas, and American Beauty; in terms of period pieces, she would go on to design A Woman of Independent Means (1995), Frida (2002), and The Missing (2003).

I weirdly really enjoyed the costumes, despite the fact that I was watching a shitty YouTube version of the movie. There was a lot of glam, and I even started screencapping stuff I liked.

Since it’s an older production, it was hard to find out much about the costuming, but I did find two articles that gave some insight. Weiss was interviewed by Women’s Wear Daily about the film, and the most interesting bits were these:

“‘If I work alone, the best I can do is dress somebody. And I prefer to design from the inside out.’ Which is why, she says, she enjoys and accepts suggestions from the stars involved… ‘An actress like Bette Davis is someone you should listen to… The Twenties were also a time of new freedom for women; they had only recently won the right to vote.’ She especially enjoyed the chance to show a change in fashion with the passage of time, from the free-flowing styles to ‘the slight beginning of a more fitted waist’… Weiss had what she calls ‘a rather limited budget’ and eight weeks before shooting to get the costumes together. Somewhat less than half represent her own designs, the rest ‘a kind of search and seize show’ in which costumes from the period were collected. ‘When we finished adding touches and accessories, every costume was like a collage'” (Pat Lowry, “Home Watch: ‘Little Gloria’s’ Glorious Costumes,” WWD, Aug. 25, 1982).

There’s also an article about Bette Davis and how she related to her fellow cast and crew, in which Davis’s former assistant and biographer recalls:

“I remember Miss D advising the costume designer Julie Weiss that she needed to stick up for herself more. Outfitting this large cast in period clothing was a monumental task and Miss D recommended that she insist on hiring more people to help her.  Miss Weiss said that the producers would not agree to that” (Bette Davis: Tireless Advocate for her Crew). She visits his home, and meets his family, in this cream, sheer, lacey early 1920s dress. I really love these froofy styles! She meets Mrs. Vanderbilt in this beaded, tabard-style number. Her hair was ON POINT throughout. After hubby’s death (only 1.5 years later), she’s in this gorgeous black? and red satin number that I tried SO hard to screencap. This was the best I got. Cream and black to see lawyers. In court, dressed up to the nines in navy blue with a chic hat and fur. Taking the stand in black lace and another great 1930s hat. Bette Davis was the Grand Edwardian Dame throughout. At least 10-20 years out of fashion, in mourning for her son. Her hair was kind of weird – it looks Edwardian here, but from the back the sides were rolled in a very 1940s way. Angela Lansbury’s character was rich and an artist (she went on to found the Whitney Museum in New York), which meant her wardrobe was shockingly fabulous. Ok, this outdoor luncheon outfit isn’t so exciting, especially in black and white. But check out the print on this dress… The detail around the neckline! I. LOVED. THIS. DRESS. The print is amaze-balls, and I loved the solid black contrast! Gloria’s mom (Glynis Johns — The Sword and the Rose, Mary Poppins) is Anglo-Argentinian. She’s more nouveau riche than the Vanderbilts, and a total busybody.

Cream with interesting details around the neck and hips. I don’t remember this outfit on screen, but it’s so interesting I had to include it. In court. NOTE THE NECK SCARF IS MADE FROM THE SAME FABRIC AS THE SKIRT, AND IT IS FABULOUS!

Mom Gloria had two extra-chic sisters, luckily for the costume designer and us. Love the red pint and the ruffled neckline. The print with the solids! Great color, such a Madonna face.

A French girl who served as Mom Gloria’s maid, and testifies in court, had such a great hat I had to screencap it: Watch out, this sent me down a rabbit hole of TV movie biopics! There will be more in this vein soon…