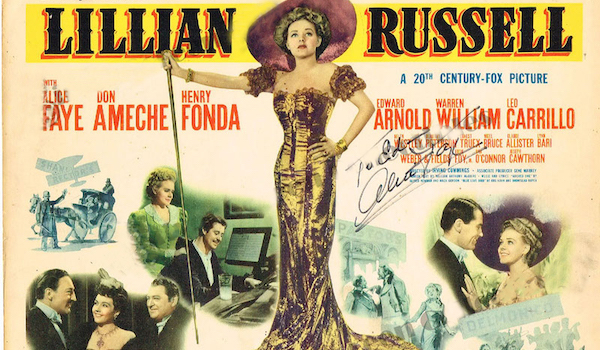 Lillian Russell (1860/61-1922) is a fascinating personality, so it’s really too bad that the only biopic made about her, 1940’s Lillian Russell, is a total snooze! Designer Travis Banton‘s costumes get a lot of praise, but they’re pretty dubious in terms of historical accuracy (a given as this was filmed in 1940).

The real Russell was a famous actress and singer who was known for her beauty, stage presence, and voluptuousness. She got her start singing in comic operas (including many by Gilbert and Sullivan) in 1879, became a massive sensation in the U.S. and London, began to have vocal difficulties around 1904 and switched primarily to acting, and retired from performing around 1919 … when she got involved in the woman’s suffrage movement, wrote newspaper columns, lectured publicly, and contributed to restrictive immigration reform. Her personal life was scandalous: she married four times, including to composer Edward Solomon who turned out to be already married/was arrested for bigamy; and spent 40 years as mistress to businessman “Diamond Jim” Brady. 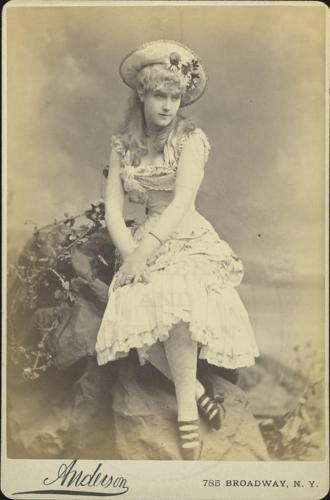 She was at her peak in the 1890s | Lillian Russell, American actress, 1893, Library of Congress 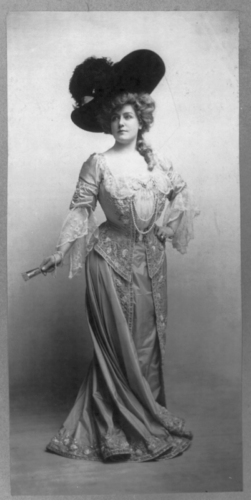 One of her more famous roles was in the play Lady Teazle, a version of The School for Scandal | Lillian Russell, 1861-1922, full length, standing, facing left; in elegant gown, 1904, Library of Congress

Unfortunately, the film removes most of the scandal of Russell’s life (Diamond Jim is just a friend/admirer, her first husband dies instead of being arrested for bigamy/divorced). Russell is just a sweet girl/later woman who wants to sing and be loved for who she is, particularly pining for her eventual-fourth-husband, the completely bland and milquetoast Alexander Moore (played by Henry Fonda, who apparently loathed the role, and it shows).

Nonetheless, money was clearly spent on the costumes, which were designed by Travis Banton (1934’s Cleopatra, The Crusades, The Scarlet Empress, The Mark of Zorro, A Song to Remember). According to one source I read, he and lead actress Alice Faye did NOT get along during the production, as she was jealous of his work with Marlene Dietrich. Nonetheless, according to Faye’s biographer,

“Alice found the dresses designed by Travis Banton … helped her portrayal enormously … The costumes for Lillian Russell were … luxurious. ‘Everything was handmade,’ Alice remembered. ‘We used to say that it was a pity that the audience never got to see those undergarments, because they were things of remarkable beauty. I remember one corset I wore in Lillian Russell that was trimmed in the finest lace and really was a work of art. But nobody ever saw it except me and the wardrobe department. Still,’ she added, ‘it made me feel special, and perhaps that was the whole point'” (Alice Faye: A Life Beyond the Silver Screen).

The film starts off in the 1870s, with virginal Lillian in bustle gowns and long hair: 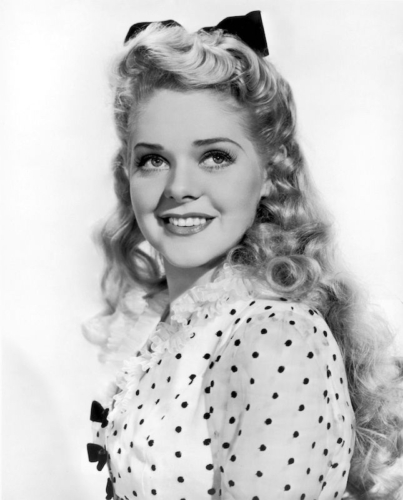 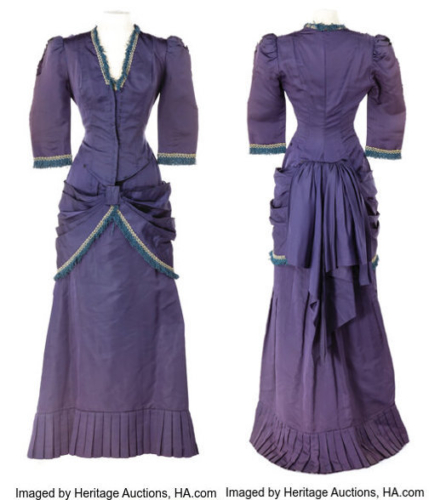 Luckily things get more exciting when she goes on the stage, and that’s when all that money comes into play. According to a 1940 movie magazine, some of that money went to

“The $3,900 corset made for her by Madame Rosa Binner. The original was an ivory brocade creation with flexible gold stays, diamond clasps and $700 worth of Belgian lace. It was a gorgeous affair — as corsets go — but when Madame Binner laced Lillian into it she found that it bulged unflatteringly around her customer’s well-rounded thighs. The outcome of this near calamity was the first corset garter, designed to keep the corset down — not to hold the stockings up as we of the two-way stretch era have come to think. Madame Binner is in Hollywood now as the picture’s technical adviser on corsets. She will supervise the reproduction of the $3,900 garment and estimates that its cost will probably run to almost $1,000. Before the production is finished, Mr. Willys DeMond, talented hosiery creator, will present his bill for nearly $3,000. The stockings he is turning out for Alice Faye are identical copies of those worn by Lillian, right down to the hand embroidered butterflies and lace insets. Though DeMond is hitting Fox for $100 a pair, his fee will look like bargain day against the prices paid by the actress who would never have offended her legs by clothing them in anything less costly than $400 a pair … Exclusive of the 27 gowns to be worn by Alice, 800 feminine costumes are being provided by the studio at a cost to them of over $25,000” (Modern Screen). 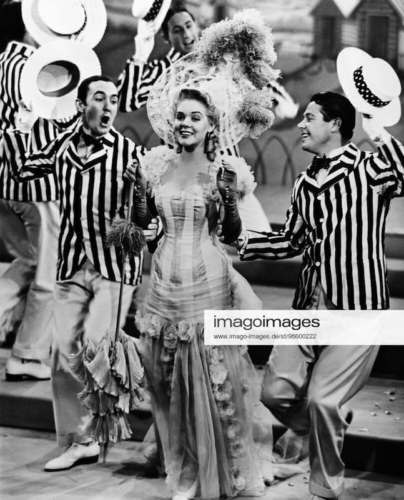 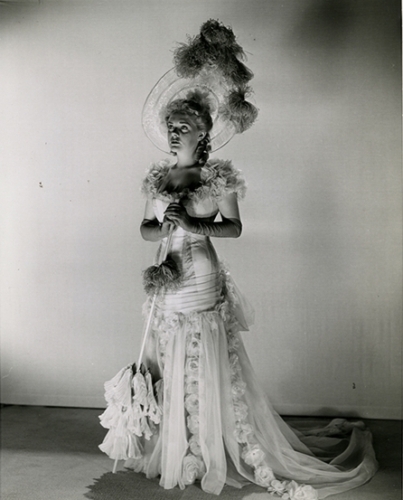 This has a great mix of sheer drapery. 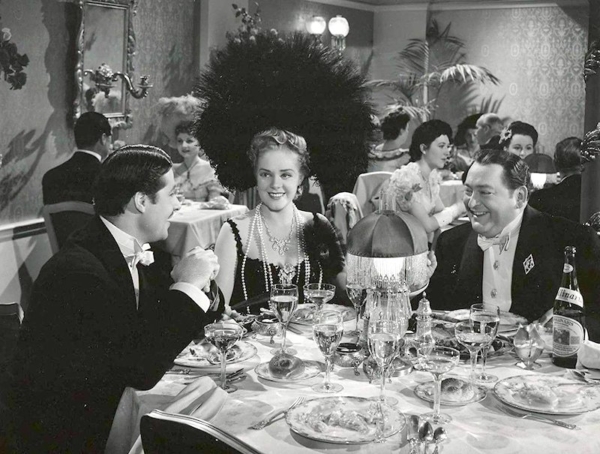 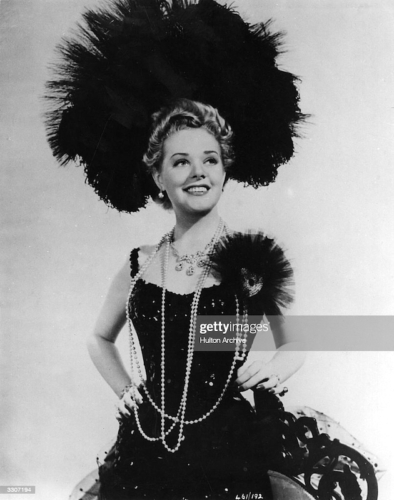 Sparkles! Tulle! Feathers! circa 1940: Alice Faye in costume for her role in the TCF film ‘Lillian Russell’, about the lives and loves of a nineties entertainer. (Photo by Hulton Archive/Getty Images) 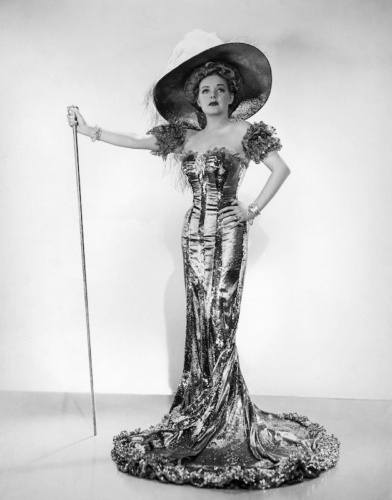 This seems to have been the showstopper, but all I can see is how narrow and fitted the silhouette is — something designer Banton was known for, but just so not 1890s to me. 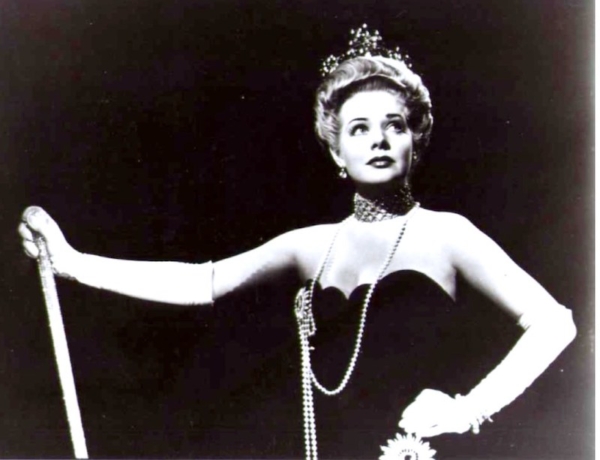 This is elegant at least. 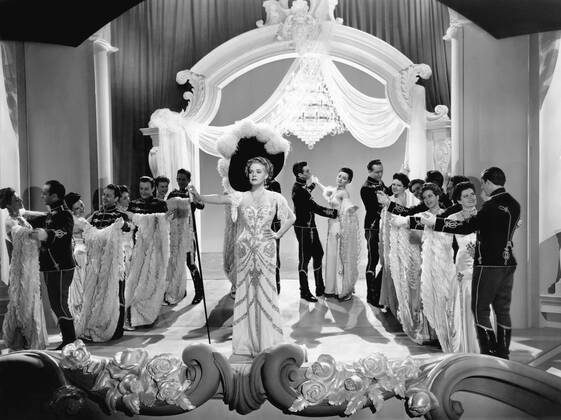 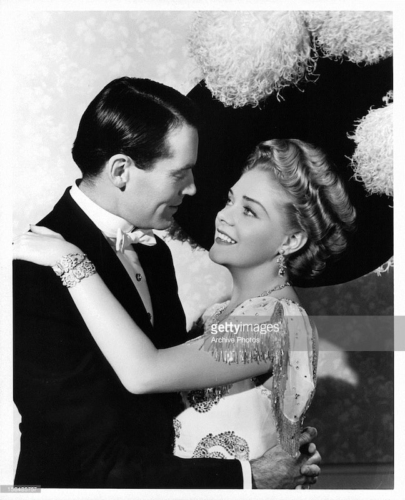 I think the hat is a nod to Lady Teazle… 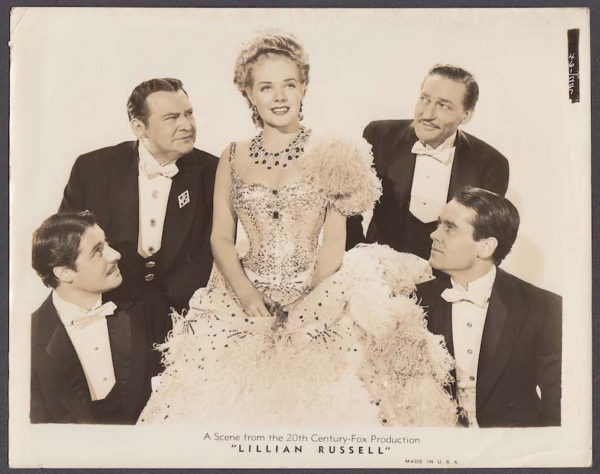 Although the dress itself doesn’t really have anything to do with it. There’s “true wuv” Alexander Moore (Henry Fonda) at bottom right. 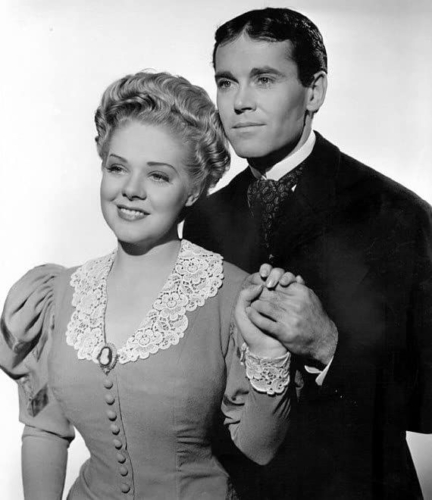 The two are depicted as a wholesome couple just made for each other. SNOOZE. 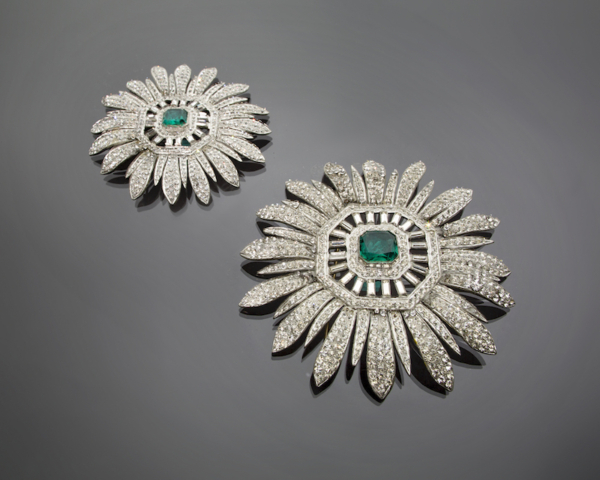 There was a lot of bling! Brooches, Worn by Alice Faye in Lillian Russell (1940), Joseff of Hollywood

And clearly designer Banton was keyed into the aesthetic of the era, based on this advertisement for dresses inspired by the film. It’s just not MY aesthetic.

So, if you’re looking for a good 1890s stage biopic, I’d say pass on Lillian Russell!

What are your thoughts on Travis Banton’s designs for Lillian Russell?