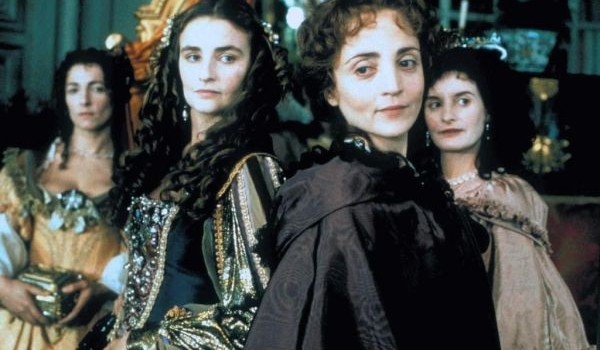 Occasionally, there comes along a movie or TV show that, even though there’s nothing spectacular about the costuming, still manages to blow me away and I want to make everyone watch it. L’Allée du Roi (1996) is one such series. It had been recommended a few times by commenters on this site, but since it’s a French film, and I have what amounts to a kindergarten-level understanding of spoken French in the best circumstances, I held off on trying to track it down. Copies of the English-subtitled DVDs were also hard to come by as well as being way out of my budget (Amazon had it listed for $80! Hell no!). But when Amazon.ca coughed up a Canadian/Region-1 DVD for under $20, I sprang on it. I rationalized that if it ended up without English subtitles, I’d just pass it along to Kendra, who is basically fluent in French and she could do the review.

However, the gamble paid off, and I received a DVD with English subtitles! The drawback was that the DVD was a VHS-transfer, so the images weren’t sharp enough to do screencaps. That said, the costuming was entirely secondary to the fantastic directing, acting, and script, so it ultimately didn’t matter. L’Allée du Roi was adapted from the novel by French author, Françoise Chandernagor, and directed by Nina Companeez. It centers on the life of Françoise d’Aubigné, from her birth as the illegitimate daughter of a soldier (born in prison, no less!), her advantageous marriage to the poet Paul Scarron (who was 30 years her elder and crippled by disease), her rise in court as the governess of Louis XIV’s children with his mistress, Madame Montespan, and finally, her “secret” 30-year marriage to the Sun King. It’s the ultimate rags-to-riches story, and one that too-often gets overlooked by the English-speaking world.

Didier Sandre is not my favorite Louis XIV (that title goes to Benoît Magimel in Le Roi Danse), but he’s appropriately big and shiny. 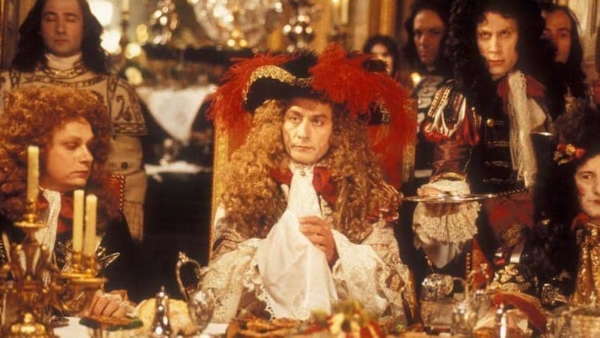 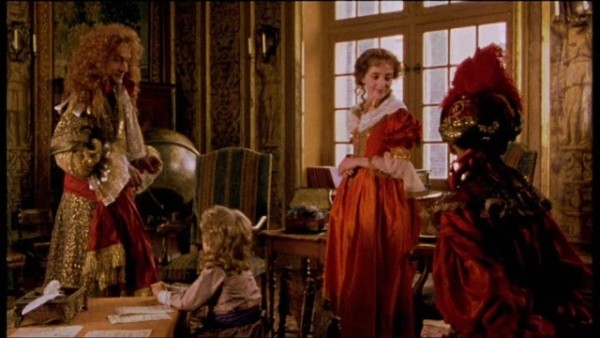 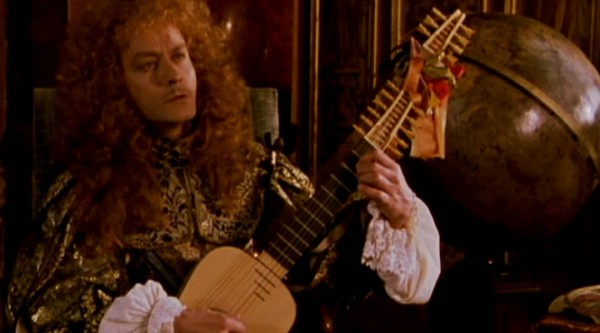 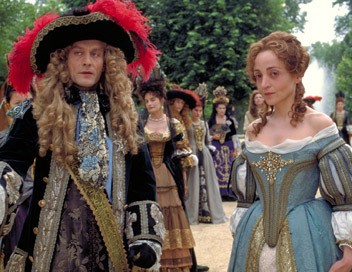 One of the things that initially made me want to watch this film was the fact that it featured the late 17th-century mantua gown. There’s not enough of these on film, imho. 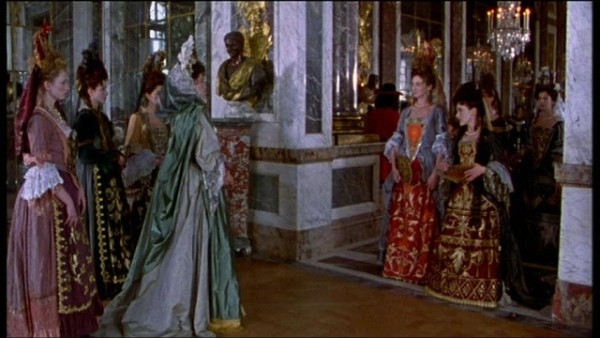 My crush on Dominique Blanc continues … She carries the role beautifully. Also, she was 40 when they filmed the series, making her the appropriate age for Maintenon’s marriage to Louis. As a woman who is about to turn 40, I felt the need to point this out. 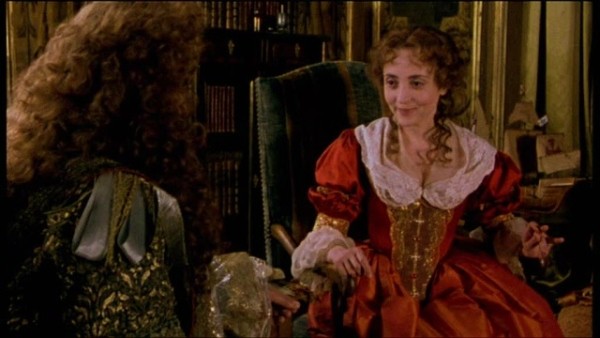 Madame Montespan’s costumes were very glinty. I admit, I got slightly obsessed with Valentina Varela as Montespan. She manages to be both horrible and likable, often at the same time. 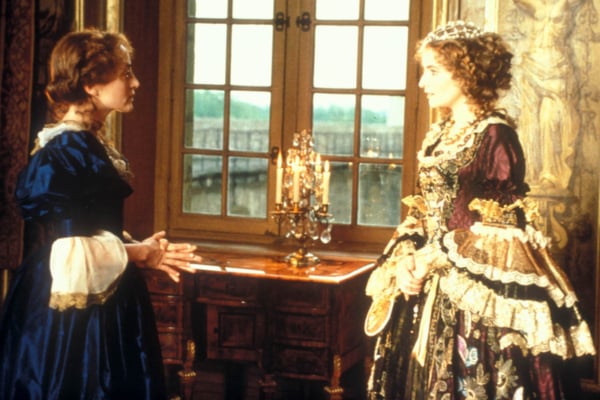 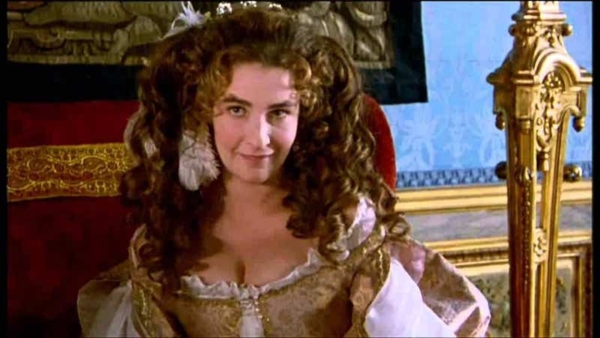 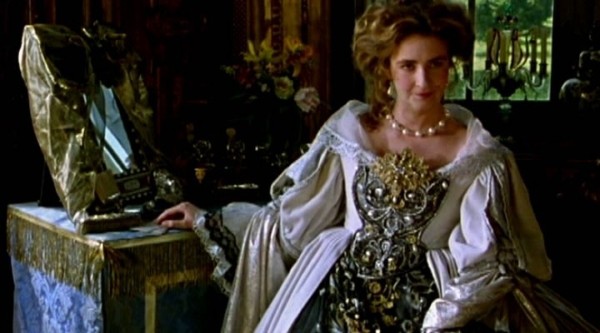 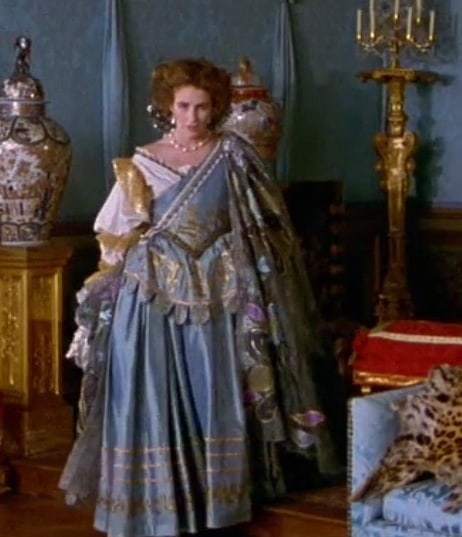 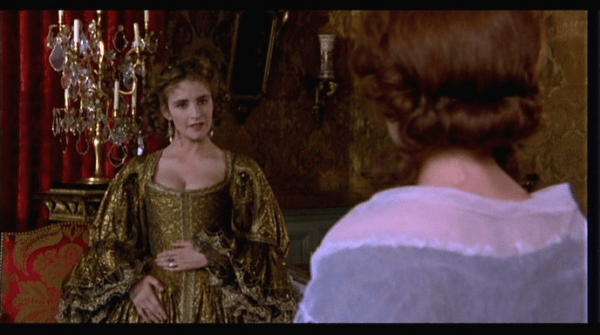 All in all, this is a great series and I cannot recommend watching it enough. Maybe one of these days it will be issued on BluRay with better quality, but even a crappy VHS-to-DVD transfer is worth watching.