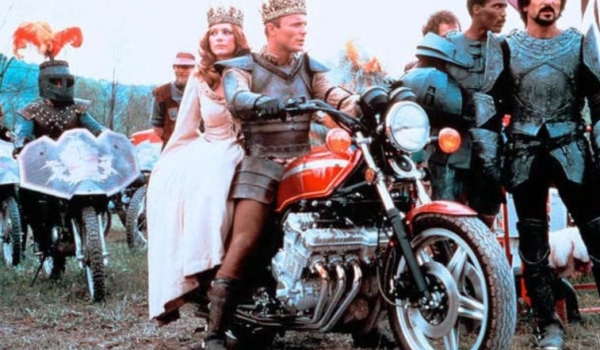 As a longtime member of the Society for Creative Anachronism, I thought I had seen pretty much every bad medievaloid film there was, but turns out I had missed a significant milestone in the genre of cheesy films about dudes in armor: George A. Romero’s Knightriders (1981). I get the impression from my older SCA friends that this was something of their generation’s A Knight’s Tale, but instead of actually taking place in ye olde times, it takes place in the modern day. Oh yes, that’s because Romero was inspired by the SCA itself, and the liminal historical/modern space it occupies in the list of really intense hobbies that are also highly ridiculous when you step back a bit. 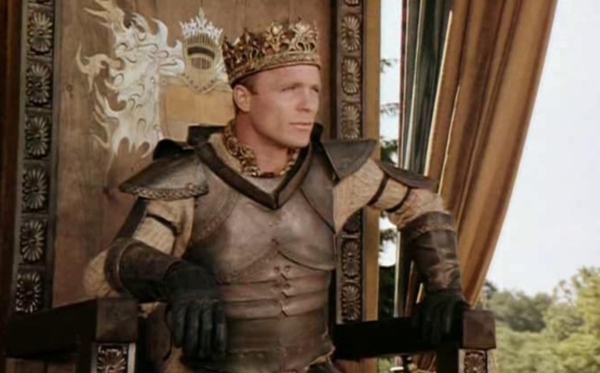 “I can see my delusions from here!”

The premise of the film is that there’s this group of people who have formed kind of an itinerant renaissance faire centered around jousting on motorcycles. Billy is their “king”, and is a little too attached to the idea of knights in shining armor, which is causing a rift between him and his queen/girlfriend, Linet. 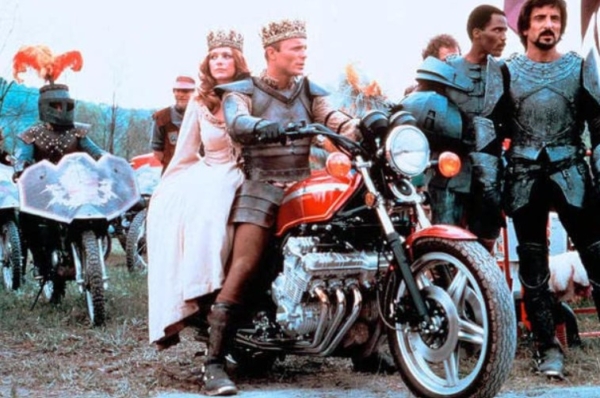 Meanwhile, there’s Alan, one of Billy’s right hand men, and the three of them complete a kind of quasi-Arthur/Guinevere/Lancelot love triangle. 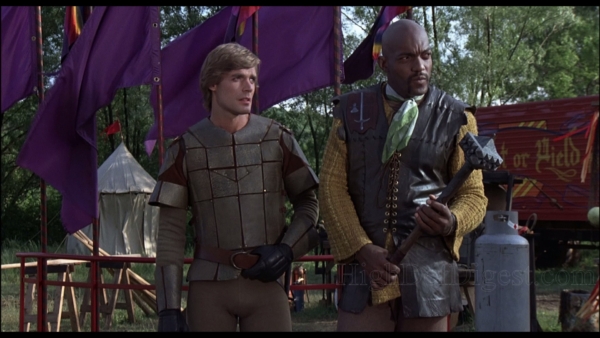 Then there’s Morgan, who is sort of supposed to be Mordred, I guess? He plays a heel in Billy’s troupe, but he’s really not a bad guy. He is ambitious, however, to unseat Billy and be crowned the next king. 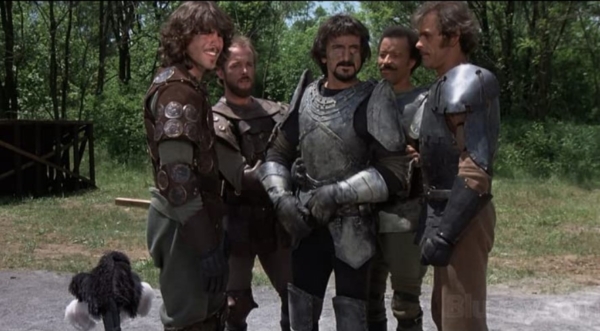 That ambition leads him to ultimately break with the group and form his own jousting team under the control of a glitzy Hollywood-type promoter. 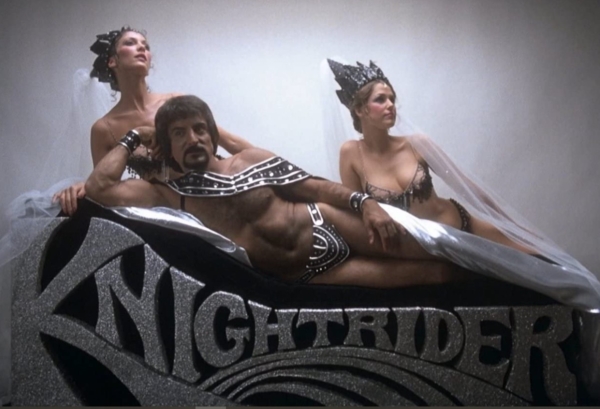 Which leads to this amazing photoshoot, and ultimately helping Morgan realize this is NOT the dream he was hoping to realize.

A surprisingly diverse cast rounds out the immediate cast, all with names/personalities modeled on various Arthurian knights and Robin Hood characters. 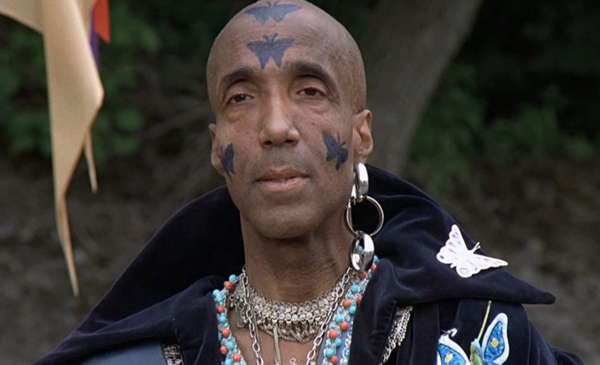 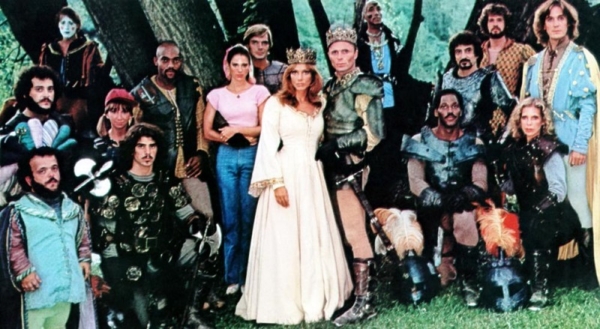 Honestly, this entire concept is no more ridiculous than any given SCA event.

There’s a feud with the local sheriff’s department who show up to harass the group and beat them up, and a local neo-nazi motorcycle gang who also drop in from time to time to cause chaos. And the appearance of a mysterious Native American motorcycle jouster who silently seems to fulfill some kind of prophecy in Billy’s delusional mind, leading him to accept his fate. 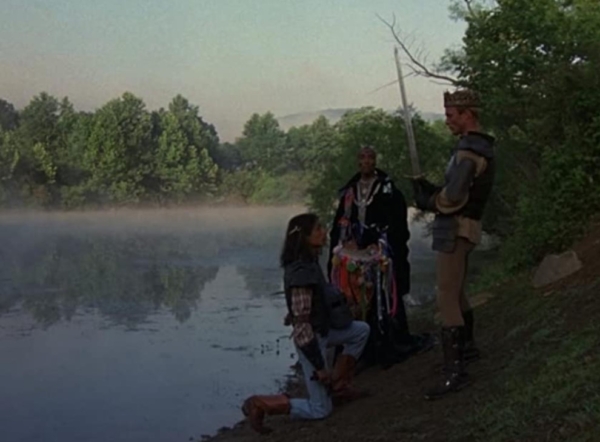 The plot is a little too ambitious for the actual content, but somehow it all more or less works. While the runtime is a tad excessive at 146 minutes, at least it held my attention through most of it (even if I was cringing a good portion of the time). 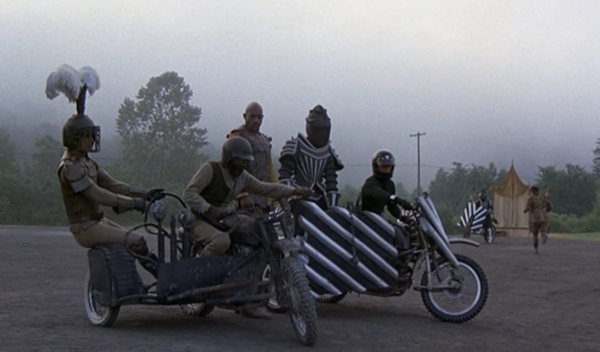 This was the era of carpet armor and Freon canister helms in the SCA, so I have really no room to judge here.

I would like to pause for a moment and mention that, by complete coincidence, both Knightriders and Excalibur opened on the same day. Had I not known this, I would have thought Knightriders was completely riffing on Excalibur, particularly since the opening scenes are so eerily similar. Zeitgeisty!

Also worth noting, this film didn’t get totally panned by critics! While it doesn’t hold up particularly well 40 years later, it’s probably safe to say that expectations were somewhat lower then. I personally think it could have knocked about 30 minutes off the run time and been a much tighter viewing experience, which is apparently what happened in non-U.S. releases of the film. 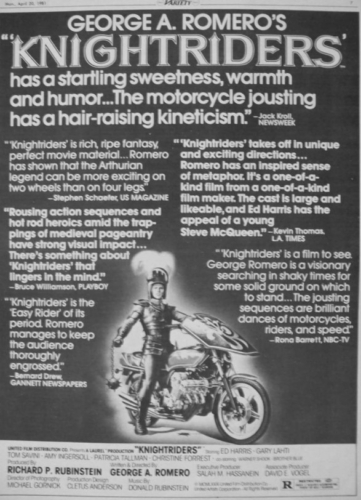 Have you seen Knightriders? What did you think?