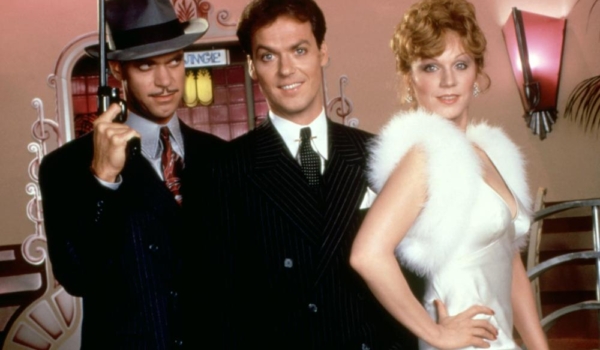 Perhaps no other film defined my childhood as much as Johnny Dangerously (1984), laying the foundation for a lot of what would develop into my predilection for arch comedies intentionally taking the piss out of historical and modern tropes. Directed by none other than Amy Heckerling, whose debut two years before with Fast Times at Ridgemont High (1982) made a jab at teen high school dramedies a la John Hughes, and followed up with this flick that took the 1930s gangster drama with all of it’s romanticized violence and turned it into an absurdist comedy about the ridiculousness of the genre. Featuring Michael Keaton in his prime as notorious gangster with a heart of gold, Johnny Kelly, there’s also Joe Piscopo (fresh off a successful four years on Saturday Night Live) as Johnny’s rival Danny Vermin, and Marilu Henner as the object of Johnny’s desire, the chanteuse Lil Sheridan. The cast is packed with 1980s comedy cameos from likes of Danny DeVito, Dom DeLuise, and Peter Boyle, and of course the fabulous Maureen Stapleton, who plays Johnny’s sweet Irish mother, whose astronomical medical bills spur Johnny to pursue a life of crime. Young Johnny Kelly, played by Byron Thames, got his start in crime by delivering “newspapers” for a local mob boss, in order to pay for his mother’s surgery. Little Tommy Kelly, Johnny’s younger brother, is innocent and bookish and destined for a life in the law. This complicates the brothers’ relationship when they grow up and Johnny runs the most successful mob crew in New York city, while Tommy is promoted to district attorney.

The costumes were designed by Patricia Norris, who is probably best known now for her work on 12 Years a Slave (2013) and The Immigrant (2013). They’re very broadly 1930s in silhouette, since the film is set 1935, and they’re good, though the hair and makeup (which Norris is not responsible for) is very 1980s. Marilu Henner gets some nice costumes in this film, even if her hair and makeup are straight out of a nightclub in 1984. This salmon pink bias-cut dress is particularly pretty, but it’s hard to find any good photographs of it on the internet. Also, who said red heads can’t wear pink?? The guys in the film are all in tuxedos or three-piece pinstripe suits. Also, fun fact: my sister was in a yoga class with Ms. Henner and said 1) she’s incredibly sweet, and 2) she has an eidetic memory. That means she can remember everyone and everything that’s ever happened to her. Ultimately, this film is just a fun send-up of the gangster genre, and you’re mostly going to remember it for the sheer amount of scenery-chewing done by Danny Vermin and Roman Moronie.

Oh, and there’s a fantastic music video that incorporates shots from the film by none other than “Weird Al” Yankovic!

Are you a fargin icehole? Tell us about it in the comments!