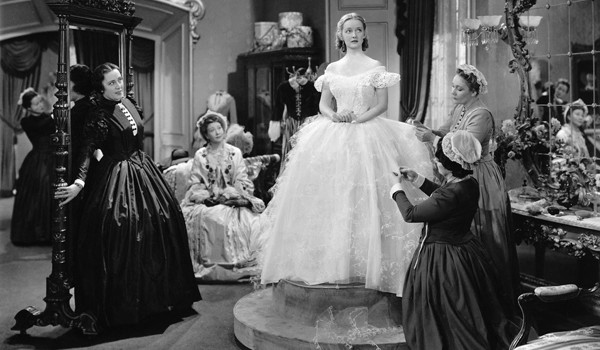 This is one of those movies with a lot of hype that maybe doesn’t translate to a modern audience. Or maybe it’s just me. The story is extremely “of its time” — so the crucial plot elements can come off as dated, sexist, racist, or just don’t make sense today in the early 21st century. Even though the star, Bette Davis, built her reputation by playing hard women and unlikable / unconventional roles, her character of Julie here comes off (today, to me) as a merely a spoiled, obnoxious idiot, nothing rebellious or challenging (despite winning the Best Actress Oscar for this role). But she has some nice dresses!

Jezebel is often compared to Gone With the Wind. Some say this film was Davis’ compensation for not getting the role of Scarlett O’Hara, and others say this movie was essentially her audition for Gone With the Wind. But just as many sources say David O. Selznick had no intention of casting Bette Davis as Scarlett when he optioned Margaret Mitchell’s novel in 1936. Still, it’s an obvious comparison since both movies are about entitled Southern belles trying to get a man who doesn’t necessarily want them.

Both movies also went over the top with splashy costumes, but Jezebel is in black and white, while Wind is in glorious technicolor. Unfortunately, Jezebel‘s pivotal ballroom scene depends on color — Julie wears a red dress instead of virginal white. Yes, you can see that she’s wearing a dark color while everyone else isn’t, but damn, this would have been so good in technicolor. Seems like a missed opportunity.

Still, you can tell that the costumes are fabulous. Created by the preeminent Hollywood designer Orry-Kelly, the gowns worn by Davis do follow the historical lines of the 1850s. There is an obvious lack of corsetry, except in one dressing scene where we’re shown her corset and cage crinoline. But usually, closeups show a very squishy, soft bodice line (but luckily no princess seams or pointy boobs). The hair is styled in a more historical fashion, but the makeup is very 1930s. 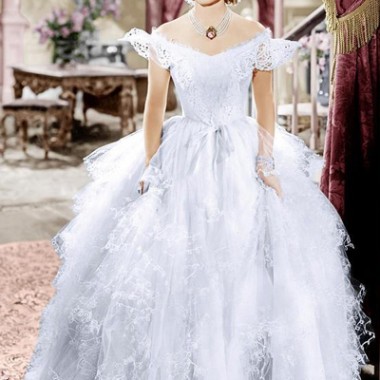 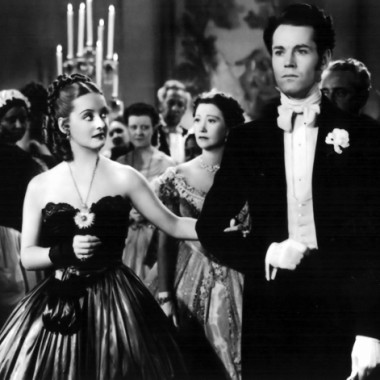 Scene from the ball where Julie is ostracized. 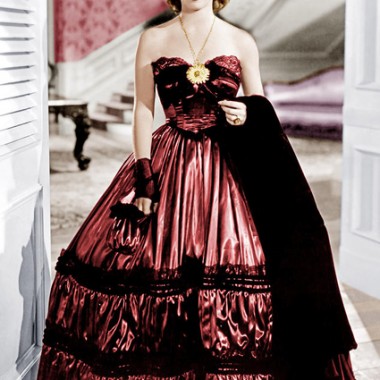