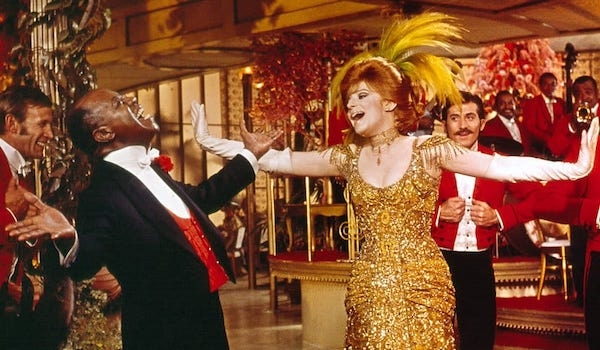 It’s the last of the classic Hollywood historical musicals, and some think it set 20th Century Fox back for years. But Hello Dolly! (1969) has all the singing and dancing and big, bold costumes I need on a slow Sunday. Yeah, Barbara Streisand always looks like her ’60s self, but Irene Sharaff’s Oscar-nominated 1890s costume designs are totally fun, and the music — especially the title song with Louis Armstrong — gets stuck in my head. Or, as the New York Times summed up in it’s review circa 1969:

Matthau gives a good imitation of W. C. Fields to Miss Streisand’s Mae West, but the picture is not his, nor is it the youngsters’ — Michael Crawford, Marianne McAndrew and E. J. Peaker. It belongs to Miss Streisand, who visits it looking great (and something like an eccentric kewpie doll) in Irene Scharaff costumes, and to the production designer, John DeCuir.

Yep, this film all about Babs’ singing and the fabulous look of the flick. It’s not a deep, moving story, and the leads — Streisand and Walter Matthau — actively hated each other on set, so there’s zero chemistry. For that matter, the choreographer, Michael Kidd, conflicted so much with designer Sharaff and director Gene Kelly that they weren’t on speaking terms. Considering all the big, complicated dance numbers in this movie, it’s a wonder that filming was completed in 90 working days. 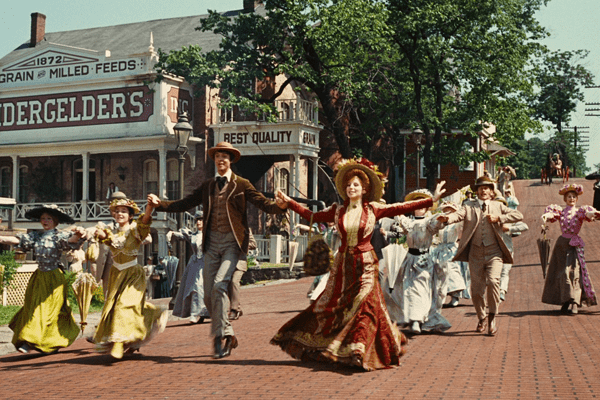 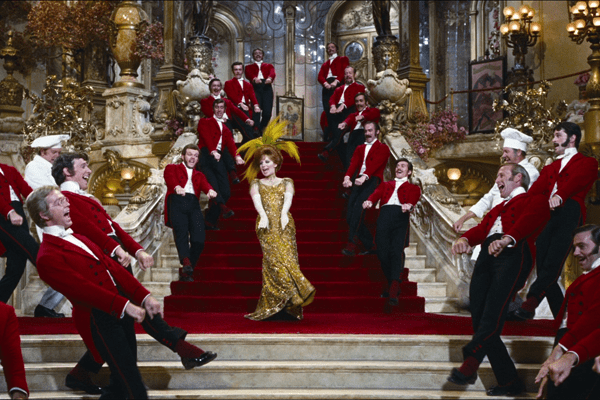 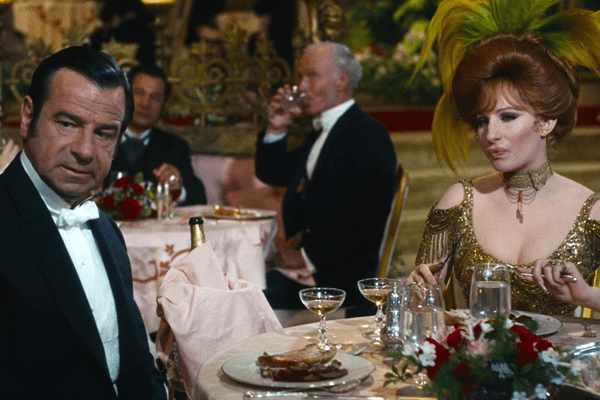 Oh, how they hated each other.

Perhaps the most stunning costume in the film is the glittering gold gown Streisand wears for the title song-and-dance number. It reportedly cost over $10,000 to construct because it contains almost a whole pound of 14K gold in the thread and jewel surrounds. Scharaff said:

“The thread used in the Hello, Dolly! dress is made of pure gold. It comes in very fine tubes, is pliable and can be threaded like beads. Because of some technical lighting problems, the pure-gold material was the only way I could achieve the quality that both the director and I wanted.” 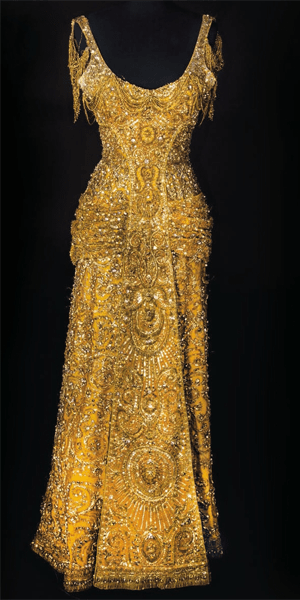 Photo from the Debbie Reynolds auction catalog, where the dress sold for $123,000. 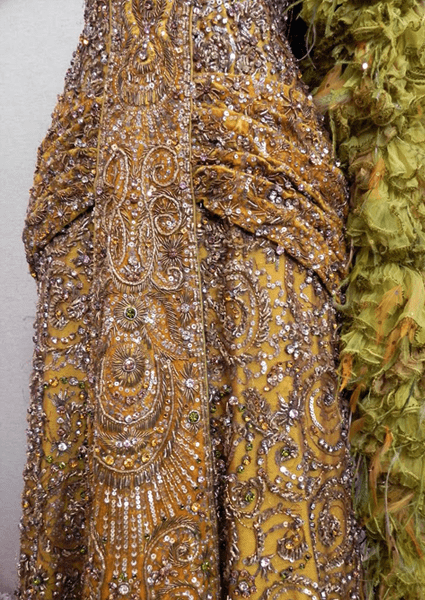 Close-up of the beading.

Is it a precisely accurate 1890s evening gown? Not really. But it’s gorgeous, and it works for the film. If the classic age of Hollywood musicals had to end, at least they went out with Hello Dolly! as a big bang. 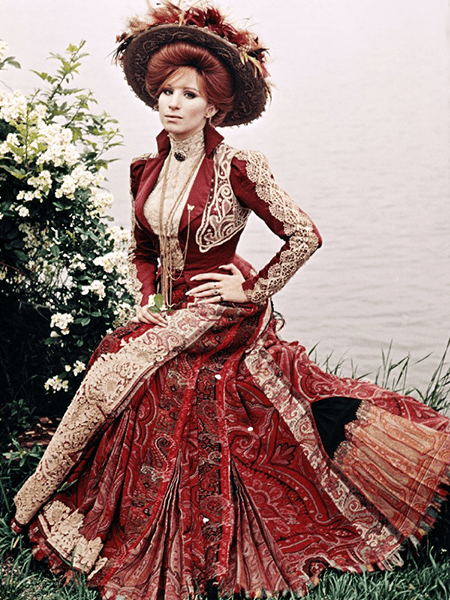 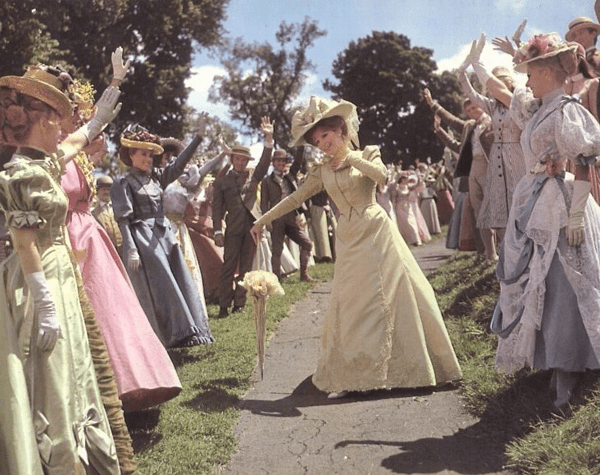 And yet these pastel suits look passably good for the period. Really, the silhouettes are alright throughout the film, it’s the materials and little details the make it look 1960s. 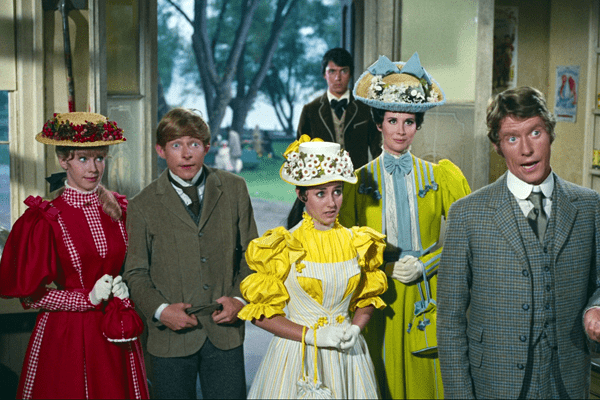 Then there’s the technicolor palette that was obligatory for all musicals. 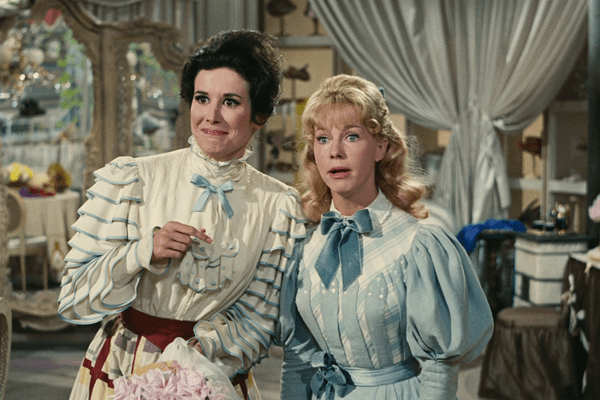 I’m sure that’s a zipper up the back of her dress, but who cares?

Do you think Dolly is still lookin’ swell?