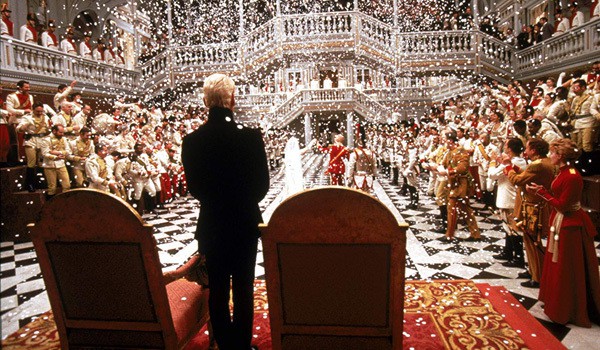 There were Olivier‘s and Zeffirelli‘s versions earlier, but nobody had the guts to put every word of Shakespeare’s Hamlet on film for over four hours. It took Kenneth Branagh to make this happen and do so in spectacular fashion. Ken, of course, stars as the melancholy Dane, and he gathered an all-star cast with Kate Winslet as Ophelia, Derek Jacobi as Claudius, Julie Christie as Gertrude, and cameos by everyone from Judi Dench to Robin Williams.

The main filming location was the grand baroque Blenheim Palace, so you know this won’t be a medieval or renaissance set story. The costume designer was Alexandra Byrne in her first movie project (she’d only done TV and theater previously). While the historical period in Branagh’s Much Ado About Nothing (1993) was pretty ambiguous, this Hamlet is basically set in the late Victorian era. The women mostly wear 1890s gowns and tailor-made blouse and skirt combinations, while the men wear uniforms and suits. If anything, the prevalence of uniforms and highly tailored garments is the strongest costume theme. This makes Elsinore appear to be a militaristic court, emphasizing the fear of invasion by Norway’s Fortinbras that will happen at the end of the play.

One interesting thing to note is how richly detailed the costumes and production design are. Branagh shot this work in 70mm, much as David Lean had done for Lawrence of Arabia (1962). While this Hamlet doesn’t have the scope of Lean’s film, the 70mm was similar to the demands of high-definition TV today, emphasizing every little thing on screen. Alexandra Byrne noted in a Clothes on Film interview:

“Director Ken (Branagh) and I did Hamlet (1996) together which was shot in 70mm. It just means you learn the hard way – the camera sees EVERYTHING. Every stitch, every pile, every detail. Another challenge was that, in the story, the characters are stuck in an avalanche which meant shooting against a white background so that changed how all the colours and the silhouettes read. We watched the rushes every day though so soon my eyes tuned into the 70mm. It’s mostly something that came subconsciously in the end.”

Let’s look at some of those costumes, shall we? The film begins somewhat literally showing Claudius and Gertrude coming from their wedding. Gertrude is in an 1890s gown but her attendants are in 1860s-ish gowns for some reason. Another rather literal bit of costuming — we first see Claudius in a red uniform. Red, because he killed Hamlet’s father. Get it? GET IT? Left to right, Laertes, Polonius, and Ophelia at the wedding, all in military uniform. Even Ophelia, which is a bit odd. Full view of Ophelia’s military-style outfit at the wedding. She starts the film buttoned up, and gradually loses it. Hamlet, however, does not wear a uniform, just his traditional mourning black. With her brother Laertes, Ophelia is still tidy, buttoned-up, her hair dressed. In formal evening dress. Ophelia’s hair is like a guide to her mental state as well as her relationship to the men she’s with. With her father, to whom she’s the most subservient, Ophelia wears her hair down, and she’s in a more casual outfit, collar and vest undone. The scarf in her hair, the velvet vest, and the jewelry give her a slightly bohemian look. Ophelia’s hair is down with her lover, Hamlet. In this film, they have a not-really explicit sex scene. Full view of this middy blouse and floral skirt. Love the purse at her waist! The players are dressed in a nice range of middle-class Victorian clothes. Gertrude has a lot of gorgeous gowns, like this dark red print (which seems a bit more 1880s bustle than 1890s). In the crucial ‘closet’ scene between Gertrude and Hamlet (when Polonius is killed), Gertrude wears a Fortuny-style gown. The gown’s fabric is by Patricia and Charles Lester, who’ve recreated Fortuny pleating for many film productions. Close-up of the gown on display. When Ophelia begins to go mad, Gertrude is seen wearing this white and black polonaise gown outfit (more of an 1880s style than her previous gowns). Hair askew, madness in the air!

And then everyone dies!

How do you feel about Kenneth Branagh’s version of Hamlet?