This was one of those films I watched ages ago and it’s always kind of lived in my brain ever since. Grace of My Heart (1996) is a movie based loosely on women like Carole King, who were pioneering singer/songwriters during the 1960s. In particular, King’s life and career seems to have informed some of the major plot points in the film, though it’s not a straight biopic. Illeana Douglas plays Edna Buxton, the young heiress to a steel fortune who has absolutely no interest in being a socialite and, instead, is determined to pursue her passion, music. Wanting to shed the baggage of her birth name, Edna changes her name to Denise Waverly and runs off to New York City, and the film follows her career trajectory from 1958 to the late 1960s, as she weathers the triumphs and tragedies in her personal life.

The costumes were designed by Susan L. Bertram, who has worked with director Allison Anders on her films Gas Food Lodging (1992), Mi Vida Loca (1993), and “The Missing Ingredient” segment of Four Rooms (1995). If you’ve seen any of those films you will immediately recognize their strong related visuals, and Grace of My Heart isn’t really any different, possessing that unmistakable Anders vibe from the mid-1990s. That’s not to say that the costumes aren’t good — they are pretty faithful to the swath of the 1960s that makes up the bulk of the film, from the prim pencil skirts and pedal pushers with bouffant hairdos to the eclectic late-’60s hippie fashions mixed with Southern California beach chic. 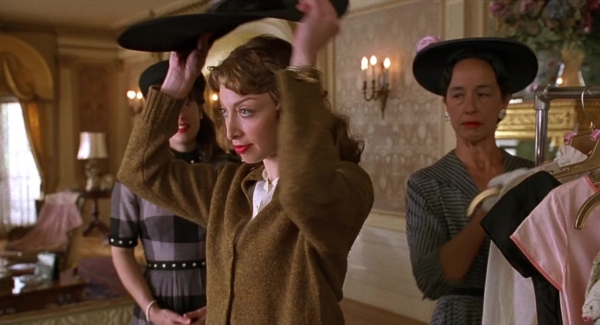 Edna Buxton is destined for greatness, but not the sort of greatness her mother envisioned for her. 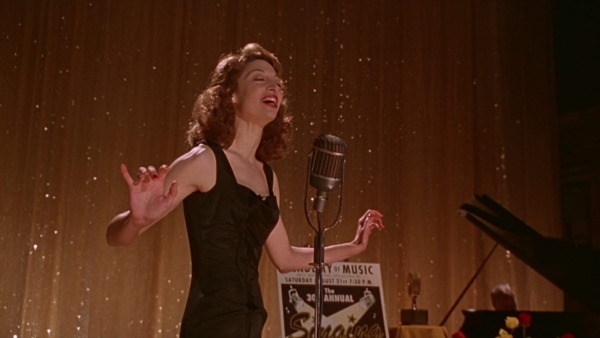 Edna’s mom forces her to wear a virginal white dress in the singing competition she’s entering, but Edna wants something more mature and sexy… 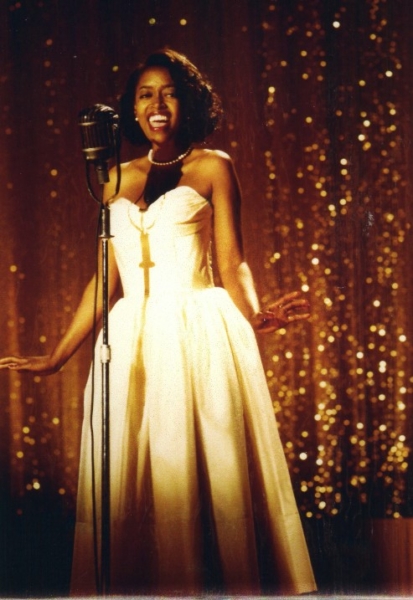 She ends up swapping dresses with another contestant, Doris (played by Jennifer Leigh Warren). Doris looks stunning in the white gown, but doesn’t win the contest because, well, she’s Black. However, Doris and Edna become friends and eventually helps launch Doris’ career. 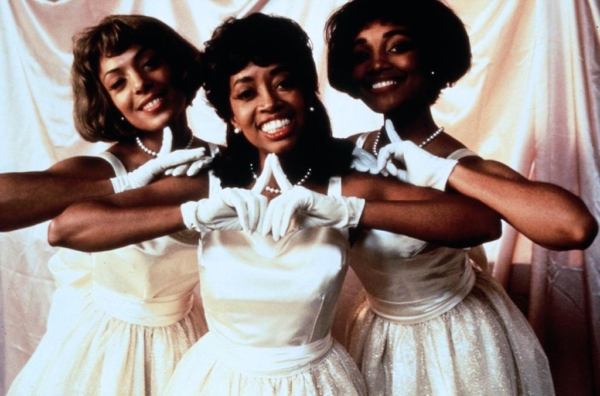 Doris goes on to front a highly successful girl group, loosely based on The Supremes. Their initial look is based on the white dress that Edna swaps for Doris’ sexy black number. 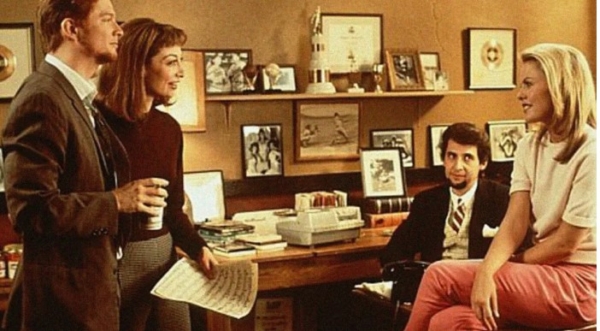 After winning the contest, Edna gets an audition with a music producer at the Brill Building in New York City. However, she is immediately told that while she’s talented, she’s not what they’re looking for at the moment. Edna makes a desperate pitch, mentioning that she wrote the song she just sang, and the producer is impressed enough to send her to Joel Milner (John Turturro) who is scouting for new songwriters. 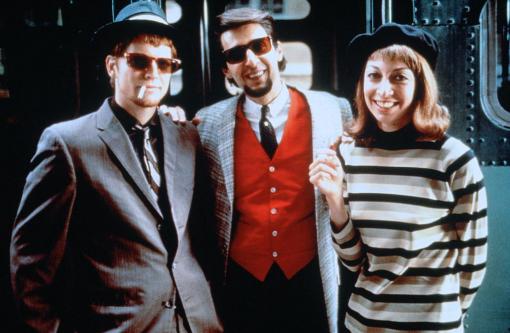 Joel sees Edna’s potential, but decides her name is going to have to go … He dubs her “Denise Waverly” and sets her to work writing music. 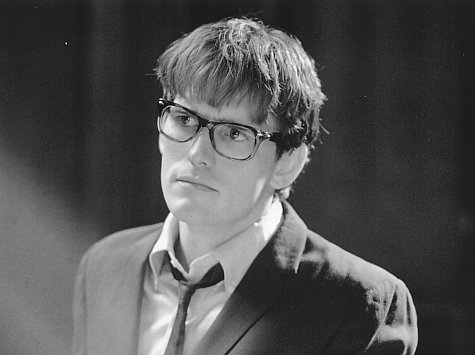 Love Interest Number One appears! Howard Cazsatt (Eric Stoltz) is a fellow songwriter. He and Denise eventually move in together, but he’s not interested in making it official. That is until she falls pregnant, and he capitulates, which inevitably ends in divorce. 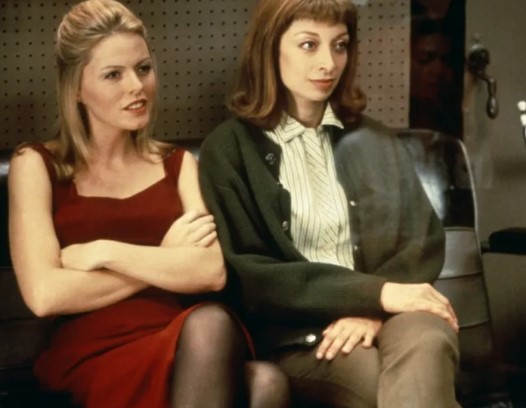 Denise is doing well post-divorce, but Joel thinks she could benefit from having a writing partner, so he teams her up with Cheryl Steed (played by Patsy Kensit), a sexy British blonde, much to Denise’s irritation. She only writes alone! She doesn’t need any help! However, the potential rivalry between the two women is subverted when they realize they actually work really well together and eventually a friendship blossoms. 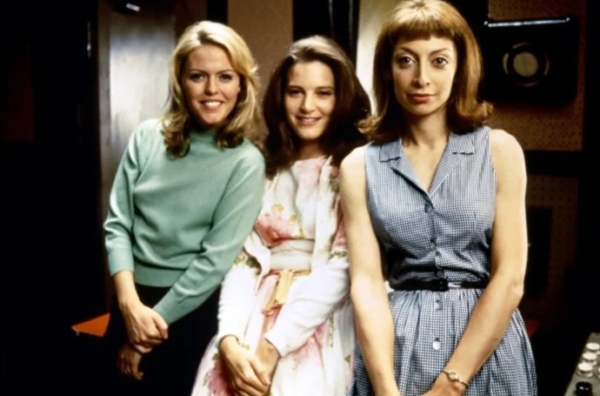 Denise and Cheryl bond over Kelly Porter, a young singer whose career is taking off, but who harbors a painful secret she can’t admit to anyone (played by Bridget Fonda, and loosely based on Dusty Springfield). They end up correctly guessing the source of Kelly’s pain, and write her a song that allows her to express herself in coded messaging. The song is a hit! 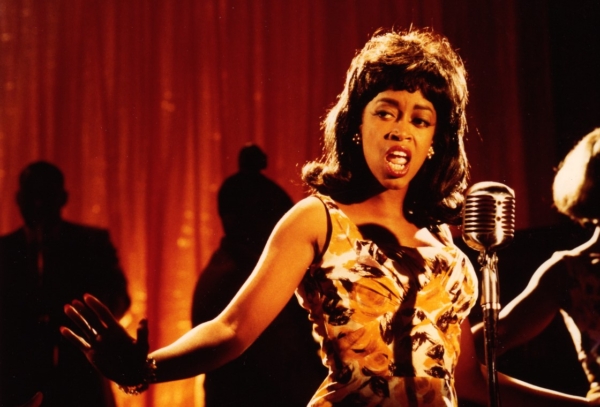 Meanwhile, Doris’ career continues to flourish with Denise’s songwriting. It’s pretty fair to say that Doris gets the bulk of the fabulous costumes in the film, as befits someone loosely based on Diana Ross. 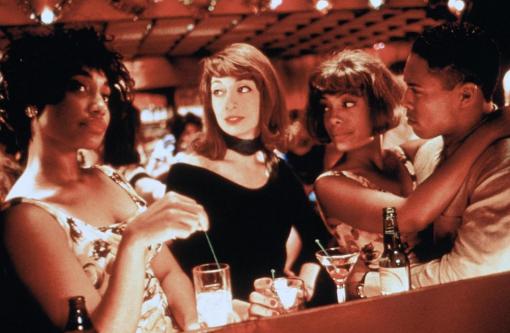 I really liked this outfit on Denise. That’s all. 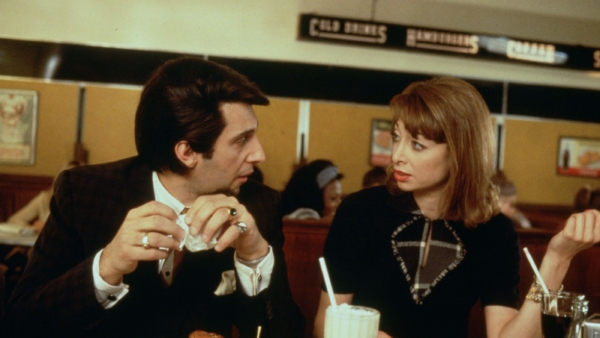 I also really liked this outfit. 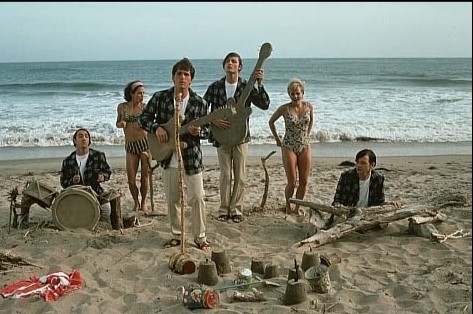 Love Interest Number Two comes along, in the form of Jay Phillips (Matt Dillon playing a character very obviously based on Brian Wilson with a heaping side of Phil Spector). He fronts a world-famous surf band in sunny Southern California, but he’s a tortured genius, so of course Denise falls head over heels for him. 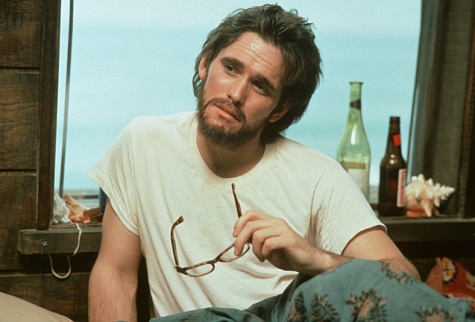 As Jay’s mental state unravels, Denise tries to keep him as healthy as possible, indulging in his eccentricities and supporting him while he continues to spiral in and out of mania and crippling depression. It’s all very tragic. Matt Dillon deserves a lot of credit for managing somehow to make this character sympathetic even when he’s a complete asshole to Denise. 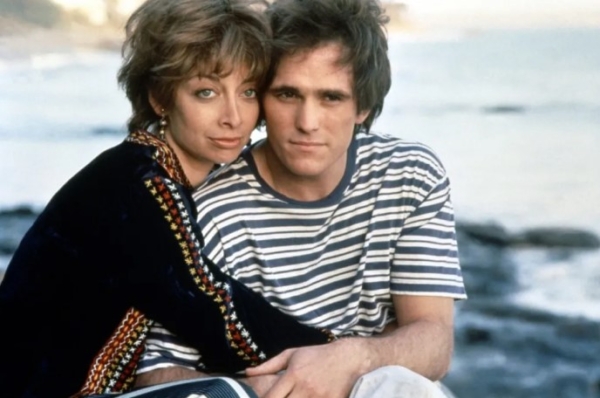 Denise continues to support her family while Jay struggles with the burden of his mental illness, until eventually tragedy overcomes their relationship. This sends Denise into a depressive spiral of her own, and she withdraws from life, joining a hippie commune, while she tries to process her grief. 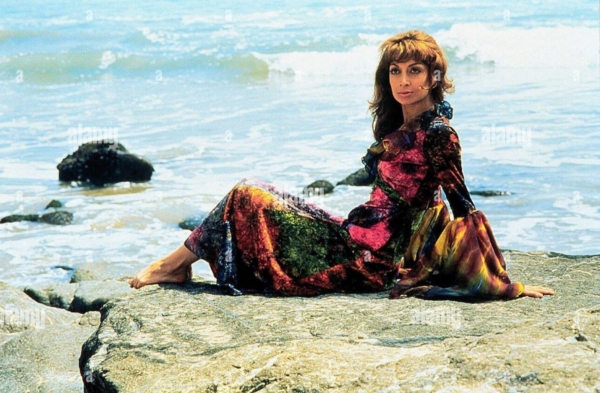 One of my favorite costumes in the whole film. I love everything about it, from the tie-dyed velour to the hair and makeup.