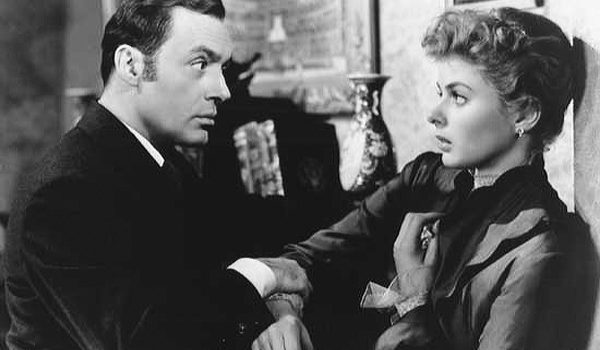 If you’ve ever heard the term “gaslighting” in reference to a bad relationship, this movie — and the British version in 1940 and the original 1938 play they’re both based on — is where it comes from. It essentially means a form a psychological abuse where one partner (usually male) manipulates the other (usually female) into questioning their sanity. The 1944 movie Gaslight really is the epitome of this term, and, trigger warning, it’s CREEPY AS FUCK.

No lie, about 20 minutes in and my skin was crawling, and I wanted to turn the damn movie off because I couldn’t stand what Gregory was doing to poor Paula. It’s reallyreallyreally hard to watch as 21st-century feminist without railing about patriarchy ‘n shit. Even the ending felt SUPER mansplain-y with the Scotland Yard inspector telling Paula to go to her room while he took care of things. I really wanted her to take the damn knife and kill Gregory in the end. Grrr… OK, I can’t talk about the plot because it makes me angry, so let’s talk about the costumes, because, for a 1940s movie set in the 1880s, the costumes are pretty good.

Mega-designer Irene gave Ingrid Bergman, playing Paula, a wardrobe of gorgeously fitted natural-form gowns, complete with proper hats, gloves, purses, and parasols. There’s a million little buttons, lovely lace, swag bustle drapery, and it all comes together to really fit the era. So while the story made me angry, at least the historical costumes were satisfying! Her hair is down in this early scene to emphasize how she’s young and naive. So we’ll let it pass. Is that a corset ridge under the bodice? Something’s giving it an excellent fit. The striped ‘singing-lesson’ costume on display. Clearly, some modern shortcuts were taken. But they don’t show onscreen — same outfit as above with the fitted Victorian traveling jacket.

Even costumes that don’t get a lot of screentime look ah-may-zing. The ombre tiered pleats look fab in black and white, even though you blink and you’ll miss them. This was Angela Landsbury’s first film — she’s a nasty sneak of a maid, and this is her off-duty dress. Her white ballgown is magnificent. Alas, it’s hard to find or get a good screencap. Even her aunt’s “prop” costume that sits in the attic is beautiful. Nobody wears this in the movie, but it’s still a fantastic gown.

Have you seen Gaslight? Did you enjoy the costumes despite the ick factor?