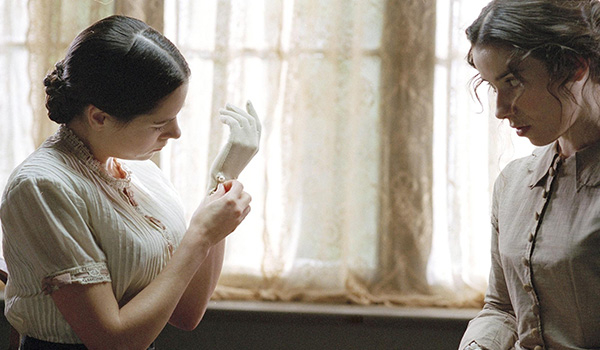 June is LGBTQ Pride Month, so we’re featuring fabulous queer frock flicks each Thursday. Queer folks have always been part of human history, long before there were words to describe these identities and orientations. But now we can and will say GAY! (and LESBIAN! and TRANS! and BI! and QUEER!) proudly, whether or not others try to legislate or pray it away.

Another adaption of a Sarah Waters novel, Fingersmith (2005) is less of a queer story as it is a Victorian crime caper that happens to include a lesbian relationship by the by. Which is awesome! This is what authentic and accurate representation is all about — where people of various orientations, backgrounds, ethnicities, etc., all exist in the world and stories happen to them. The real world isn’t 100% heterosexual, white, cisgender, and able-bodied, so all the stories told on screen shouldn’t be either. Movies and TV shoes don’t need to be about the various differences because life doesn’t have to focus on that either.

There are two women at the center of this miniseries, Sue (Sally Hawkins), who’s raised in a poor part of London and lives as a fingersmith (thief), and Maud (Elaine Cassidy), an heiress who’s raised to be secretary to her book-fetishist uncle. They meet when Sue becomes Maud’s maid as part of a scheme to rob Maud of her fortune. Of course, Sue and Maud become friends, but that’s only one way the plot gets complicated. It’s full of fun twists and sharp performances all around. The story is told in two parts, first from Sue’s point of view, then from Maud’s, and if you haven’t seen it or read the book, it’s quite an entertaining trip.

The year is shown as 1861 in a calendar on the wall, and the costumes look to be appropriately late 1850s, on the cusp of 1860. Designer Susannah Buxton (Tipping the Velvet, among others) accurately shows a range of characters from various class levels and backgrounds. Since Susan is Maud’s maid, there are several dressing / undressing scenes, and the corsets, crinolines, and such look quite nice. 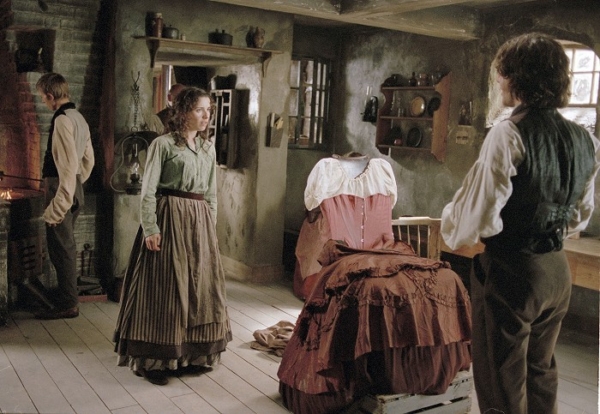 Sue practices being a lady’s maid — all the correct clothing layers are included. 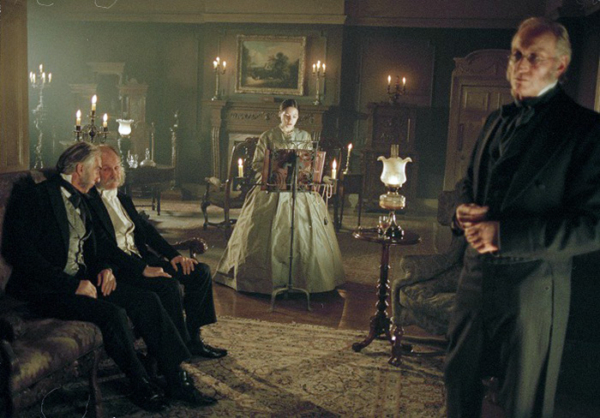 Maud reads for her uncle & his associates. She’s wearing her “best” dress, which will be a plot point. 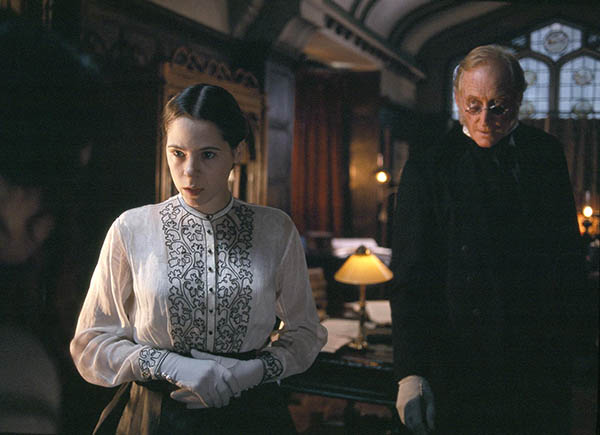 When she’s working as her uncle’s secretary or she’s painting, she wears less formal blouse-and-skirt combos. 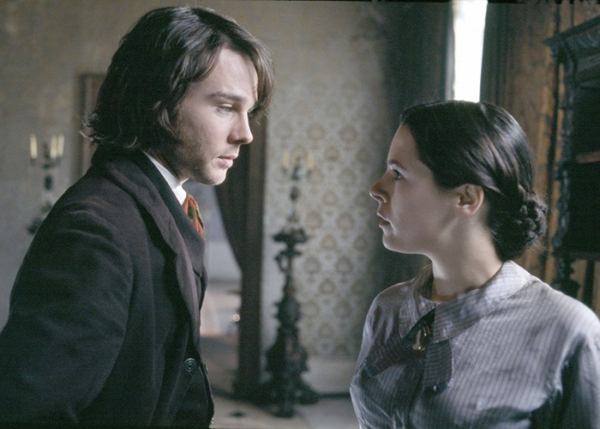 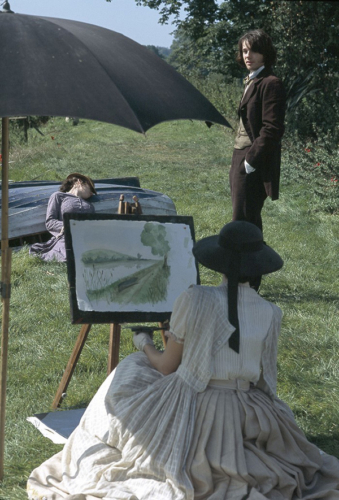 Maud wears a loose dress / apron over her blouse and skirt while painting. 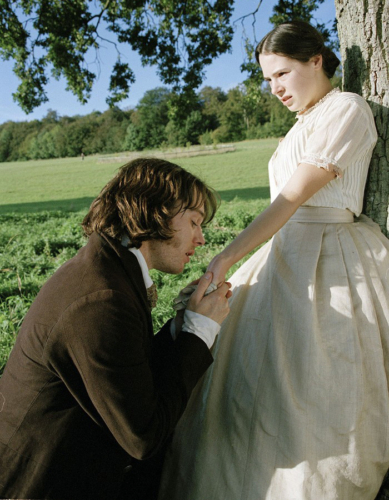 This is later in the painting scene, so same outfit without the apron. 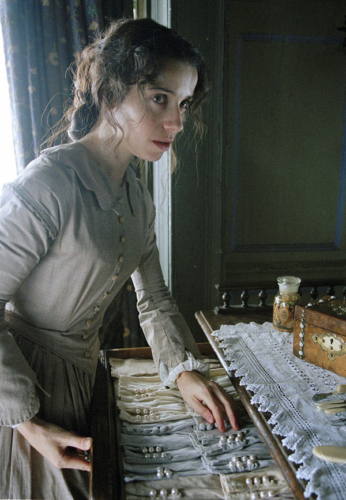 Sue arrives at Maud’s house in this one dumpy outfit, until Maud starts sharing her clothes with Sue. 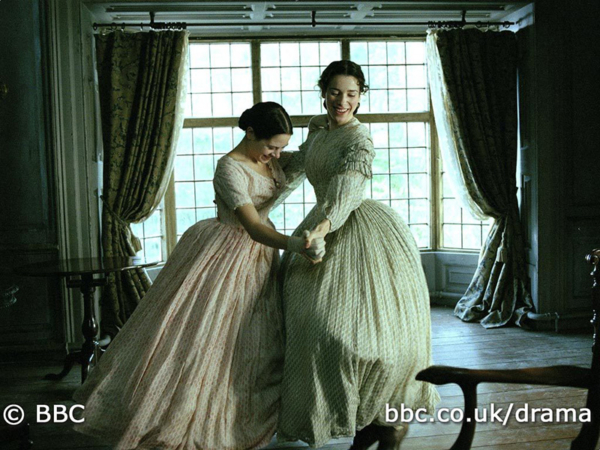 Having a dance in lightweight print gowns. 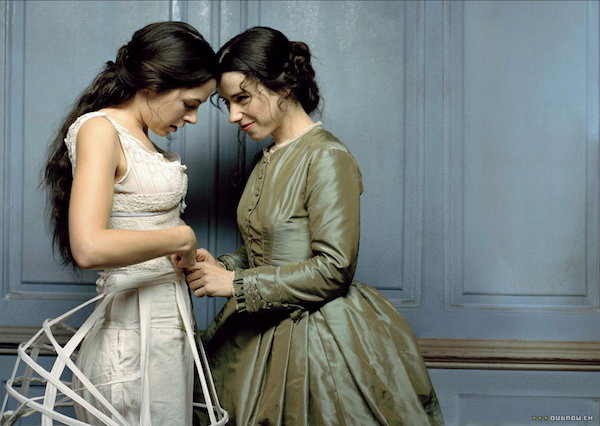 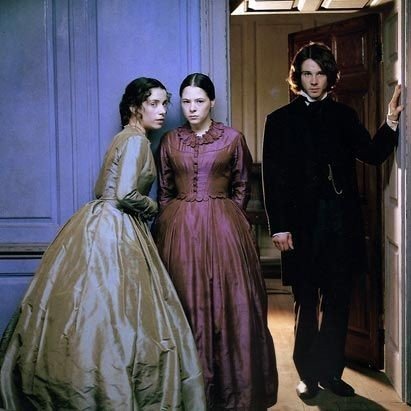 Sue is wearing the “best” dress, while Maud wears a second best. 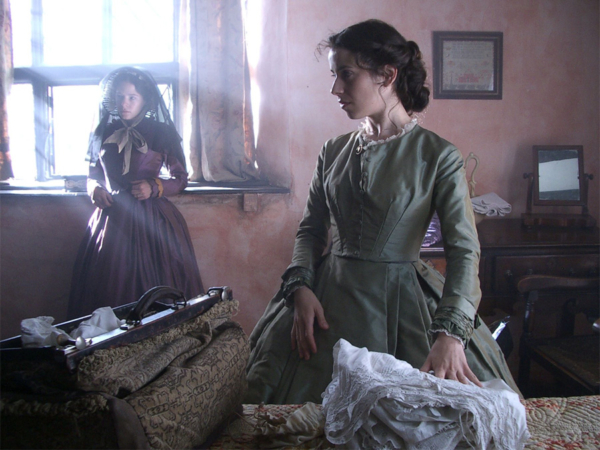 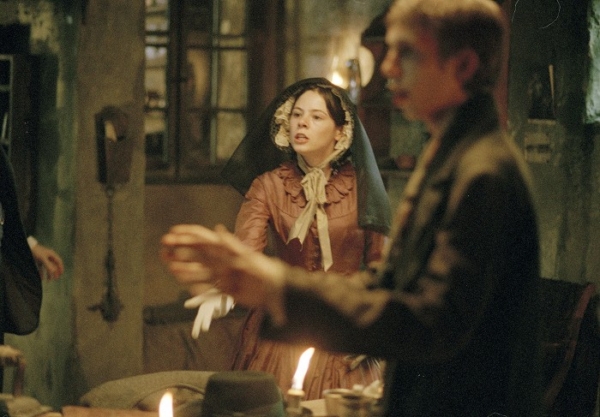 Even though this is not Maud’s finest gown, it’s still much nicer than what the lower-class folks wear.

And yes, I’m aware that this novel was adapted for the screen again in 2016. Watch this space!

Have you seen this adaption of Fingersmith?