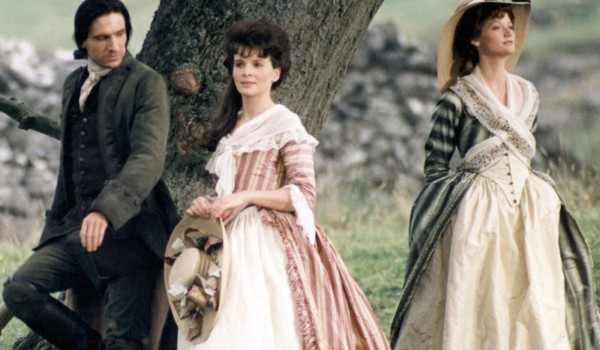 Wuthering Heights was my favorite novel as a teenager because, of course, it fit my angsty, romantic gothic self. I’m still angsty and goth, but now I’m bitter and jaded so now I see the characters and plot for the simplistic archetypes they are, tucked up underneath all that poetry. And since much of what makes Emily Brontë’s novel great is the language, when adapted for screen, all that tends to come thru is the ridiculousness of the plot and characters. Only a couple adaptions touch at some of the poetry, and I find this 1992 one titled Emily Brontë’s Wuthering Heights pretty good.

Even though this is just a 105-minute film, it manages to include all the major plot points of the novel, from Lockwood to the second generation and does mostly in costumes of the right historical periods. As I complained in my big wrap-up of all the TV and movie versions of this novel, one thing that productions frequently get wrong is the story’s carefully laid out timeline. Brontë writes in the book that the action starts in 1801 and is told in flashback, so the main action takes place from 1780 to 1784. Costume-wise, this means we’d see two distinct eras in clothing: the flashback / main story is in 18th-century fashion, while the “current day” story is in early 19th-century / Regency fashion. With the caveat that the whole novel is set at two big manor houses in the wild Yorkshire moors, with one family being wealthier than the other.

Oscar-winning designer James Acheson (Dangerous Liaisons, Restoration, The Last Emperor) created the costumes for this film, and it’s the best-looking Wuthering Heights around (not a high bar, but still). So I’m going to go through this wuthering wardrobe from start to finish, mostly looking at the women because I find them more interesting and their fashion shows the progression of time better.

Do you want to read all of this review (with over 2,000 words and nearly 60 images) about Emily Brontë’s Wuthering Heights (1995)?  The full post is available on Patreon for our subscribers! Check it out here. We’ll make this post available to everyone one year from today. Until then, only Patreon subscribers can view it!