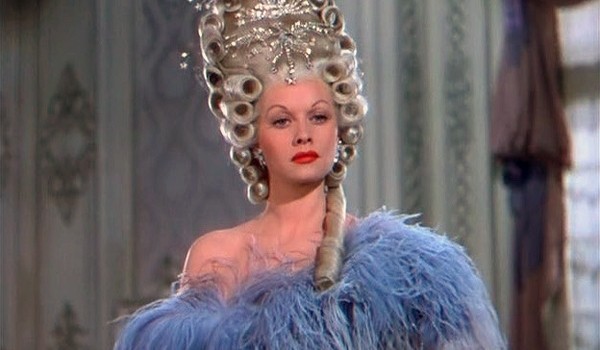 Ages ago, Sarah bugged me about reviewing Du Barry Was a Lady (1943) on the merits of this photo alone: 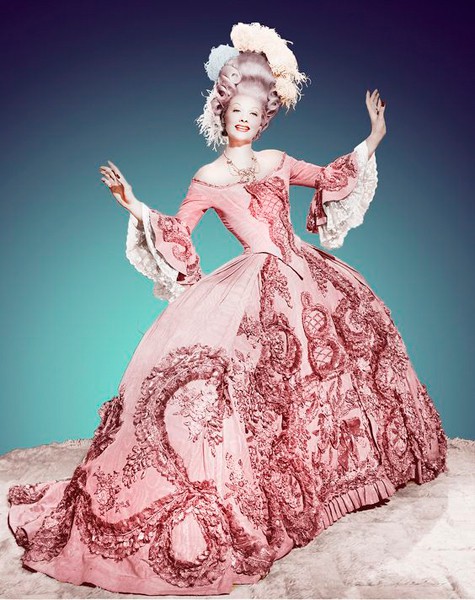 Because it’s ostentatious and Old Hollywood and, hey, that’s Lucille Ball, what’s she doing in a 18th-century-ish gown anyway? Also, it’s pink and rather drag-queeny, both of which I’m fond of. And yeah, I’d seen the flick, but counted it out since only half (or less) of the movie was historical. Then I learned that the few historical costumes in it were recycled from Marie Antoinette (1938), starring Norma Shearer. Also, Lucille Ball never wears this gown, from Marie Antoinette, in Du Barry Was a Lady, it’s just a promo pic! But I rewatched Du Barry for the umpteenth time, and I really am a sucker for this kind of thing, so what the hell. 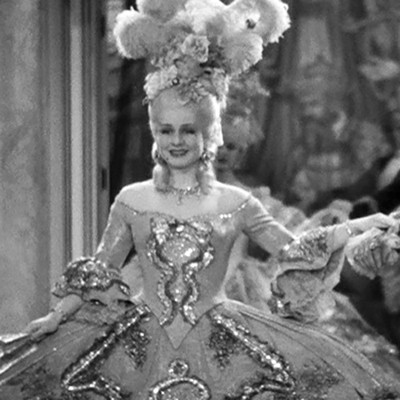 Here’s Shearer wearing that pink gown, but in black and white. So yay that the second movie’s promo at least shows it in color.

This movie is a musical, but only because it’s set in a 1940s nightclub and most of the characters are the club’s performers, thus the film is filled with set pieces. Ball plays the star singer/dancer May Daly, Gene Kelly is dancer/songwriter Alec Howe, and Red Skelton is the coat-check attendant Louis. May and Alec are in love, but she’s fighting it because he’s poor. 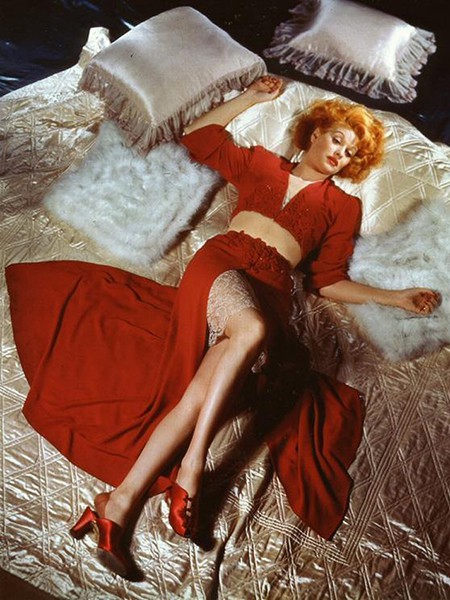 Not historical, but I’m including it because it’s awesome, and we often forget that Lucille Ball was a hottie before she was funny. 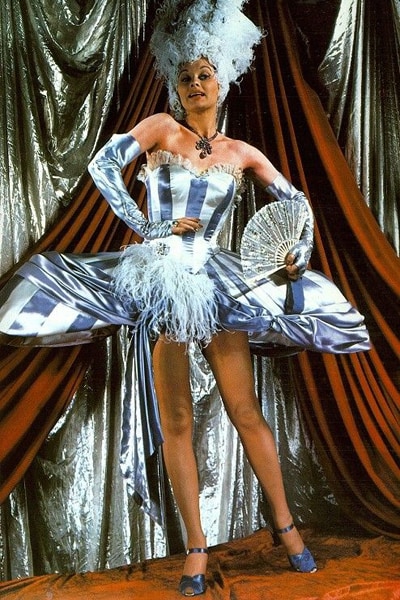 May Daly’s big stage show as “Du Barry” has her wearing this pannier outfit. 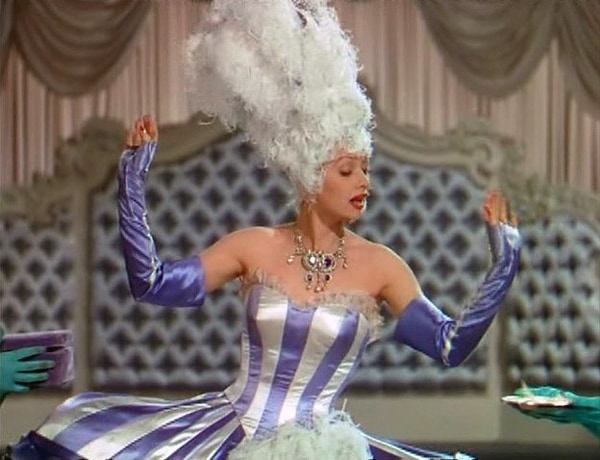 Her tall 18th-c. style wig is made mostly of ostrich feathers, which looks pretty cool, IMO. 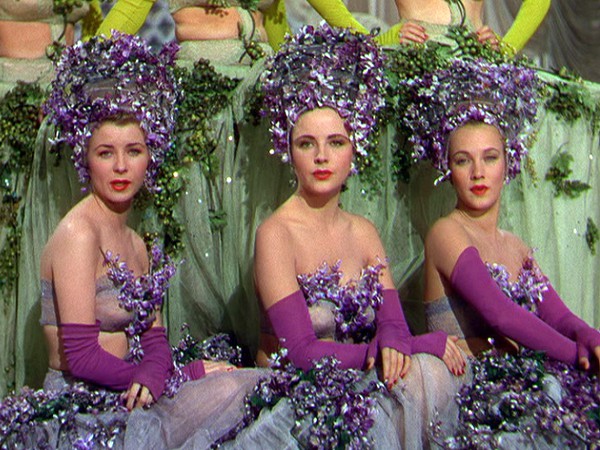 I just like the crazy headdresses on these backup singers from a different song-and-dance number. They’re in the same theme as Daly/Du Barry’s.

Comedic-relief Louis pines for the hot redhead May but has no chance, until he wins a sweepstakes and asks her to marry him. But before the deed is done, he’s knocked unconscious, and the movie goes into a dream sequence where he imagines he’s King Louis XV, and May is actually Madame Du Barry. Cue fanfare… 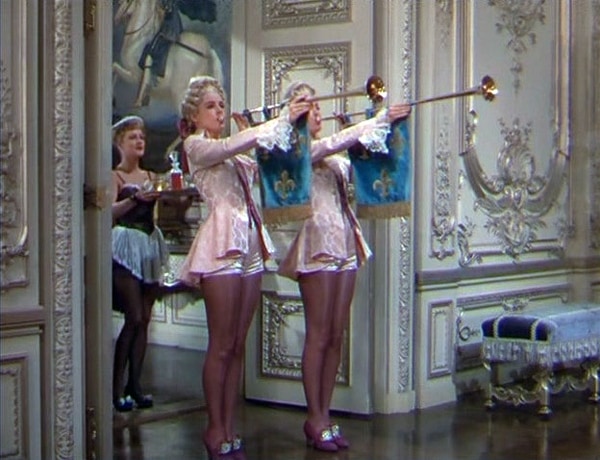 This cracks me up every time. It’s a showgirl version of 18th-c. court wear. About 50 years later, Madonna’s male backup dancers wore similar outfits for her “Vogue” performance at the MTV Music Video Awards. 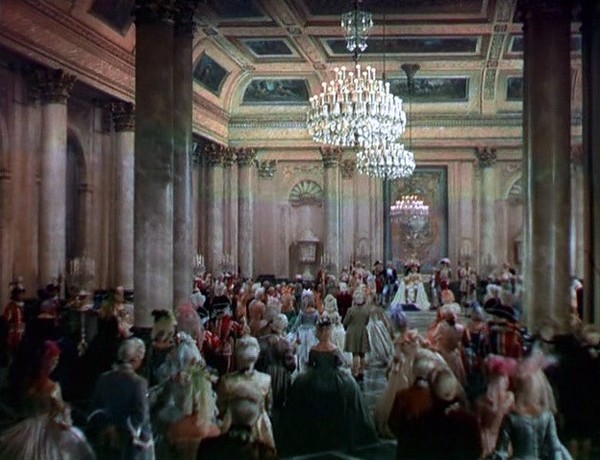 There’s a lot of recycled costumes at Versailles today. 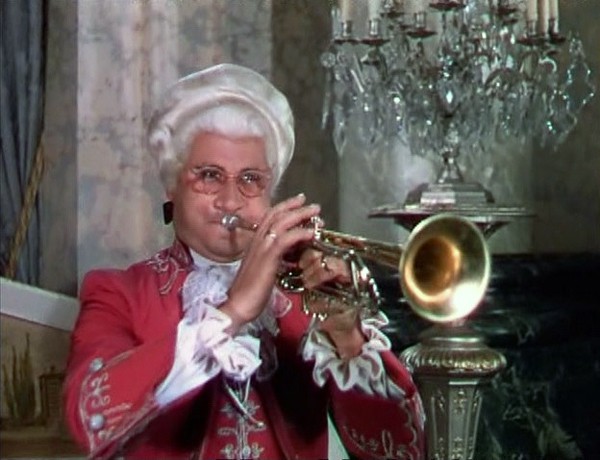 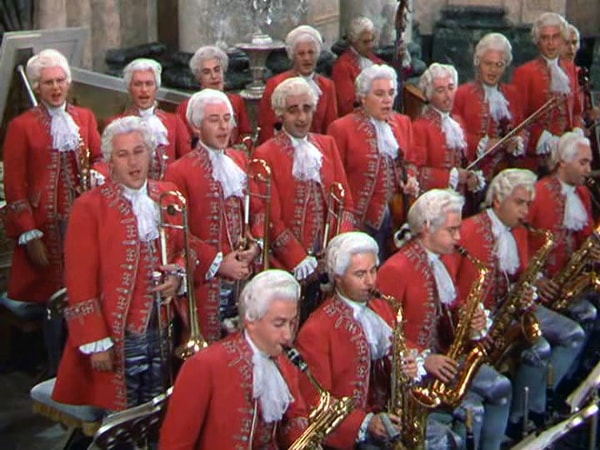 You don’t need to be a musical historian to know this is not accurate for the 18th century. 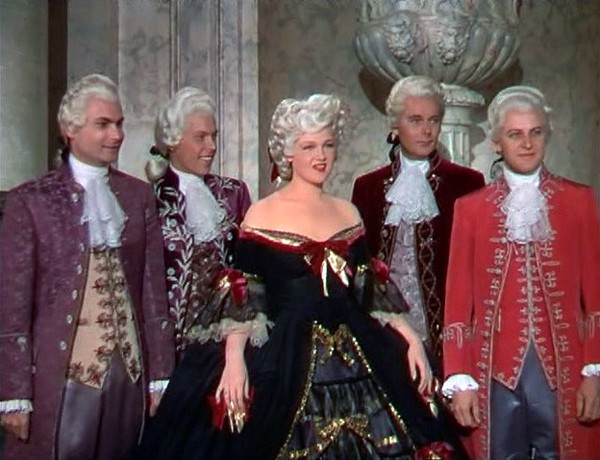 This singing group, the Pied Pipers, performed with Tommy Dorsey’s orchestra often. If I can get a better screencap of the woman’s hair, I’d love for Kendra to do an in-depth analysis of how contemporary hairstyles affected period styles, because there’s a 1940s roll desperately trying to escape that supposedly 18th-c. wig. 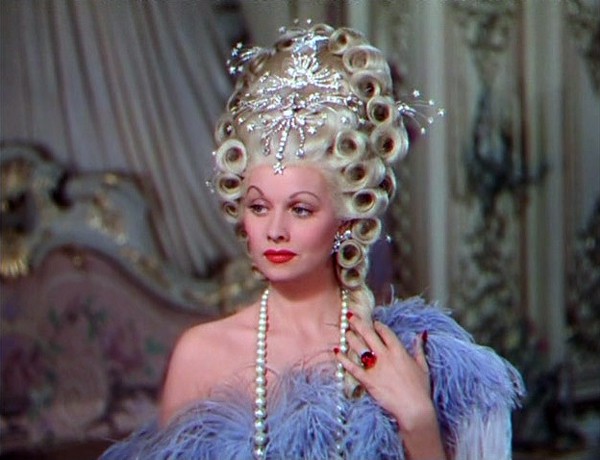 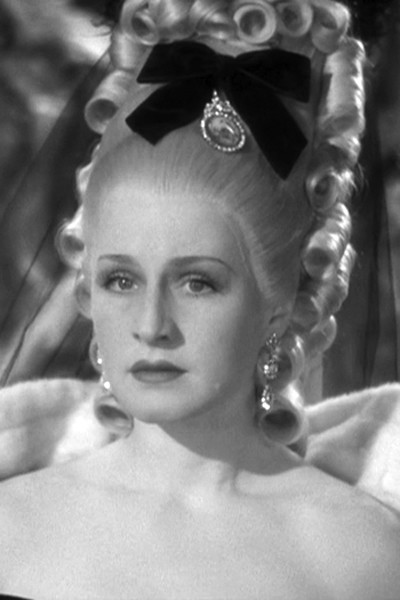 This is just one of the 1938 wigs that look a lot like what Lucille Ball is wearing. 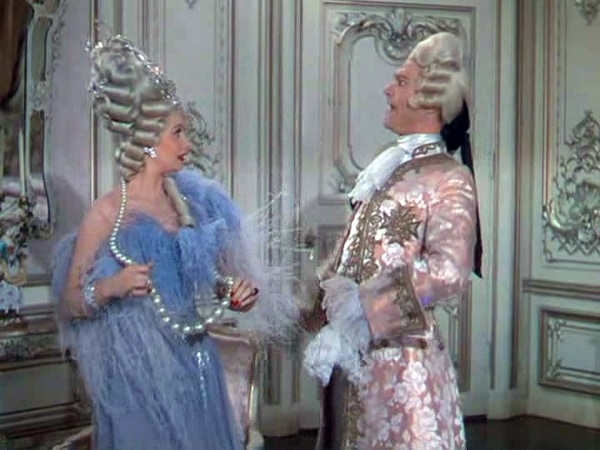 Du Barry is not super impressed by King Louis’ attentions.

Of course, the love triangle has to play out in the flashback. Alec shows up as a revolutionary called the Black Arrow, and Du Barry falls in love with him instead of the king.

The Black Arrow is man enough to come out of the closet. 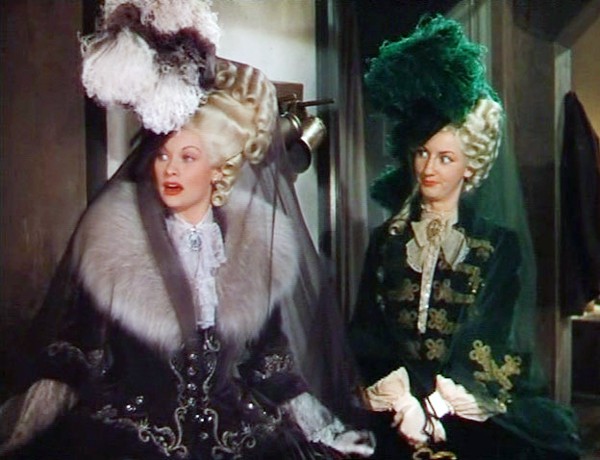 Du Barry sneaks a visit to see the Black Arrow, accompanied by an unnamed lady-in-waiting. Both outfits are recycled from the Norma Shearer movie, Du Barry’s with a larger fur collar added. 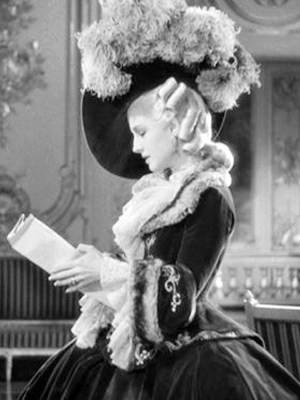 This is the riding habit from the 1938 movie. It has a small fur collar and a lot of embroidery. 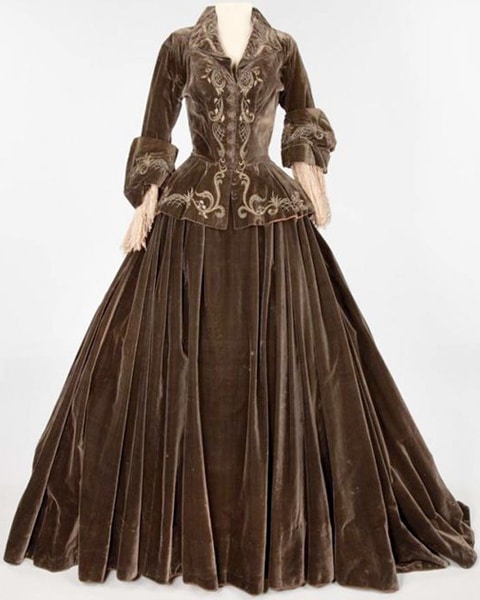 Here’s an auction catalog photo of the actual riding habit from 1938’s Marie Antoinette, for comparison. 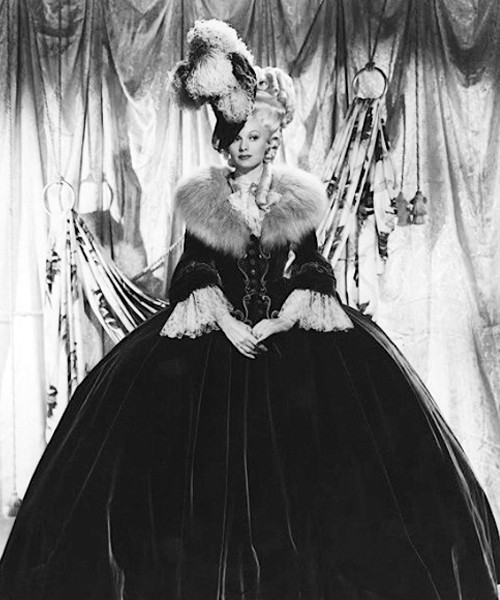 And a full promo image of Lucille Ball in the recycled riding habit. 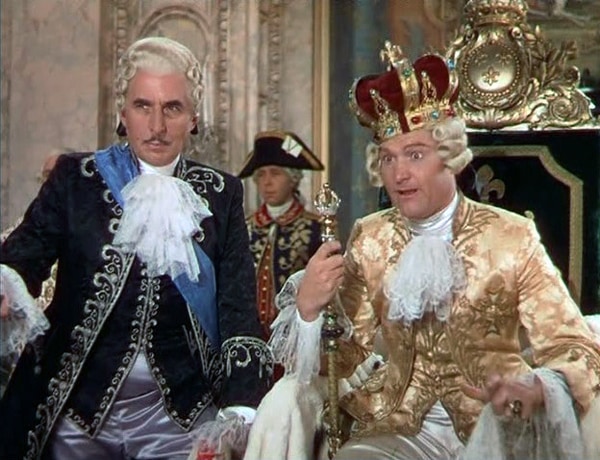 I’m going to bet the mens’ costumes are also recycled from Marie Antoinette, I just couldn’t find the screencaps after umpteen hours of searching through black and white photos. Sorry. 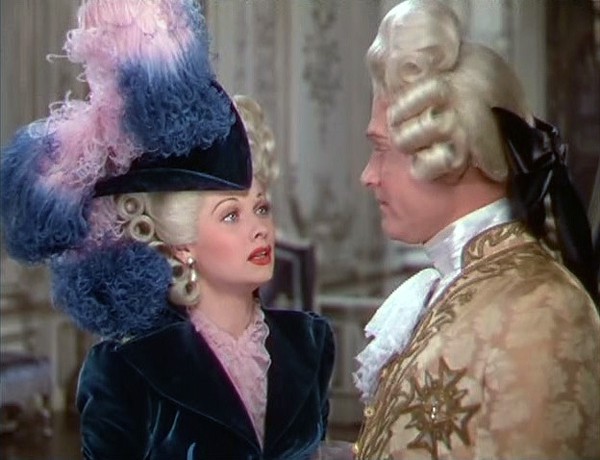 Du Barry pleads with the king not to execute the Black Arrow (while she wears a second riding habit). Louis’ wig isn’t terrible — it’s got that Macaroni bump shape in the front and buckles (rolls) on the side, and maybe even a bag in the back. Unlike the spit curled and marcel waved wigs the other men wear. 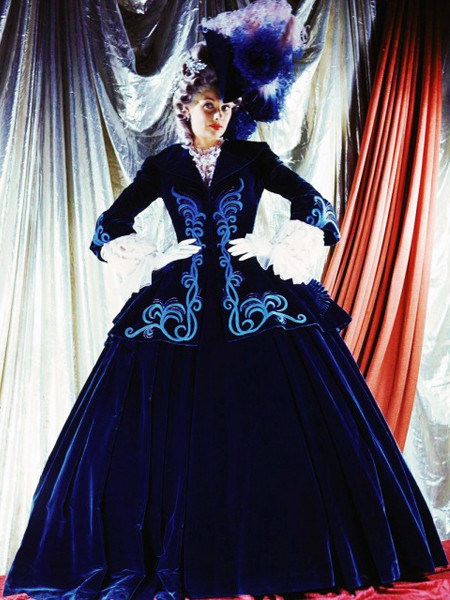 Promo pic of her last historical costume — this has got to be recycled from something, any clues?

After a little bit of historically improbable shenanigans, Louis wakes up, his sweepstakes is taken by the tax collector, and May and Alec declare their true feelings. Oh, and there were a bunch of songs in between, before, during, and after the flashback, and all are 1940s numbers, which is the best part of the whole movie to me. And, hey, at least these cool costumes got another airing!

Du Barry Was a Lady, pro or con?