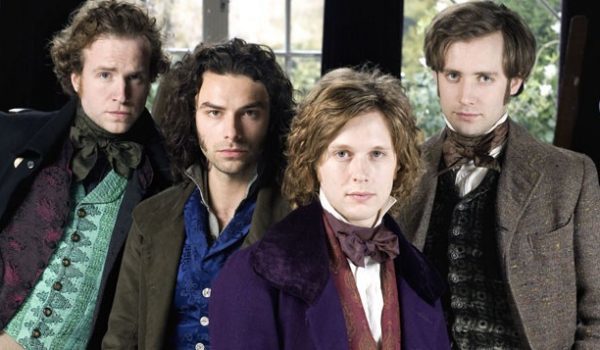 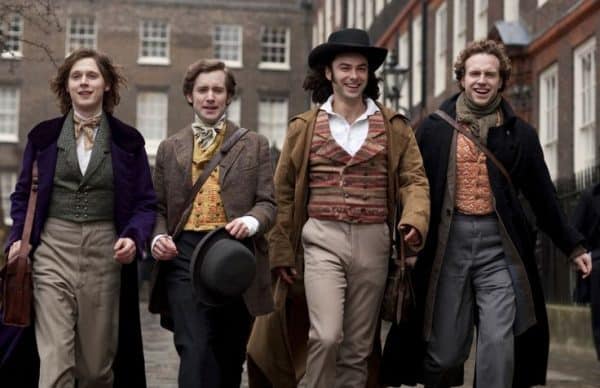 I’m sorry, I couldn’t hear you over all the pretty.

The cocktails aren’t because the show sucks; far from it. Desperate Romantics quickly became my all-time favorite historical romp — it’s got Aidan Turner, lots of costumes, some tasty adult scenes, and THE CRAVATS. And did I mention Aidan Turner? Because he’s easily my favorite thing about the entire series. The eye-candy factor with him is off the charts. 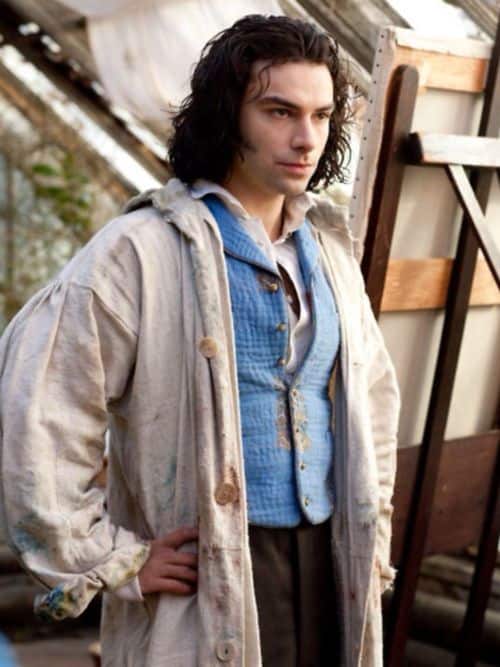 Who, me? Have a thing for dark, brooding artistic types? NEVER.

Hell, the eye-candy in general is off the charts. The boys are pretty, the girls are pretty, everyone’s pretty and young and brilliantly idiotic. The writing is also top-notch; some of the best dialog I’ve heard in years is packed into nearly every scene (phrases like “freeing the member rampant” have now become a regular utterance in my house). 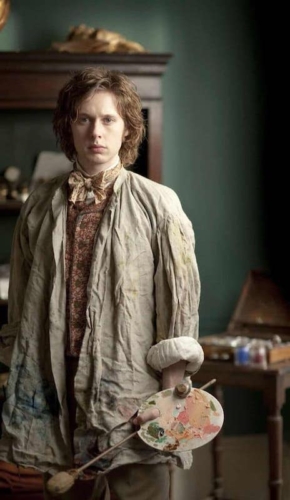 I’ll sign up to drown in Millais’ bathtub any time.

It is pretty much a very generalized overview of the Pre-Raphaelite Brotherhood, and packs about the first ten years of their existence into a timeline that appears to only be about a year or two long. But that said, it’s witty and entertaining and AIDAN TURNER. 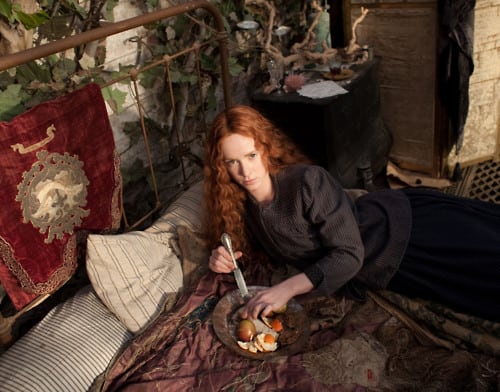 If you’re into red heads, btw, this is the TV series for you. 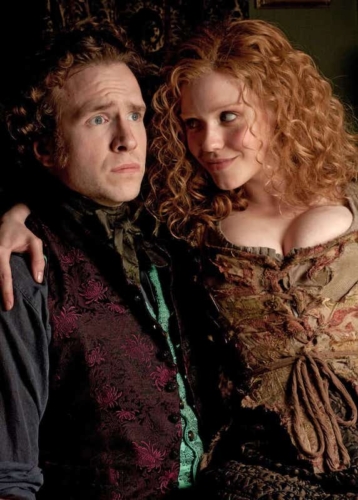 Hunty and Annie have get my vote for cutest couple.

If historical costume accuracy were a scale going from Reign (2013-) on one end and Elizabeth R (1971) on the other, I’d put Desperate Romantics somewhere in the middle, right around Victoria (2017). It’s not SUPER HISTORICALLY ACCURATE, but it gets the gist. 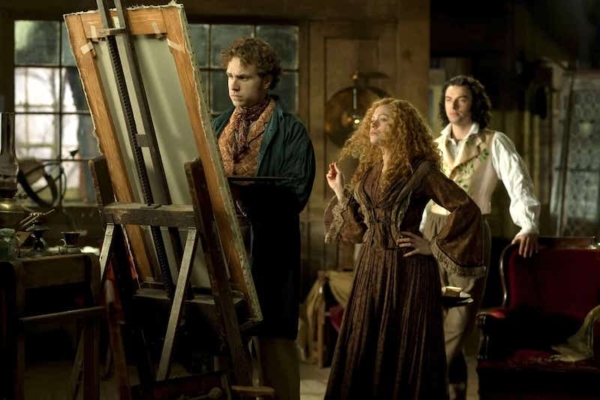 The costumes were designed by James Keast, who has a whole whack of historical costume flicks under his belt, including the first three episodes of season one of Victoria (2017), an episode of Mr. Selfridge (2014-2016), and Aristocrats (1999). The look is lavish and lived-in and largely appropriate for the time period (1849-ish to 1855-ish). And despite what you may think from some of these promo shots, the ladies do wear their hair up almost as frequently as they wear it down.

The one exception to this is Lizzie Siddal, who only wears her iconic flaming red tresses free and unfettered — she’s not just iconic; by the end of the series she’s a full-on iconoclast. Her hair is what defines the three Brotherhood artists and their art; so it’s written into her character that it comes to define who she is as well as she begins to develop into her own as an artist, not just a model. 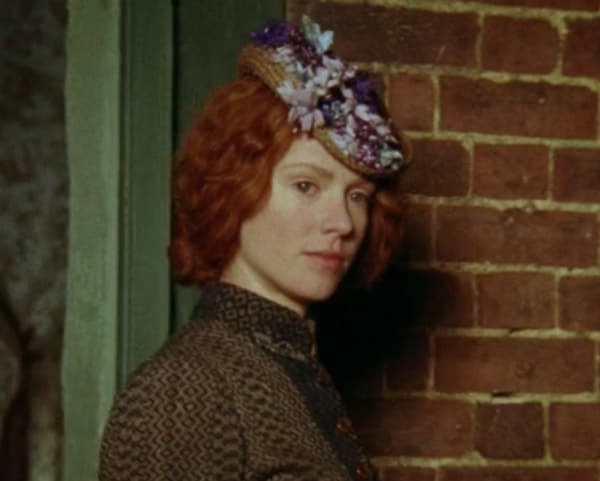 The only time in the entire series you see Lizzie wearing her hair up is five minutes into the first episode. And thank god that awful hat disappears almost immediately, as well. 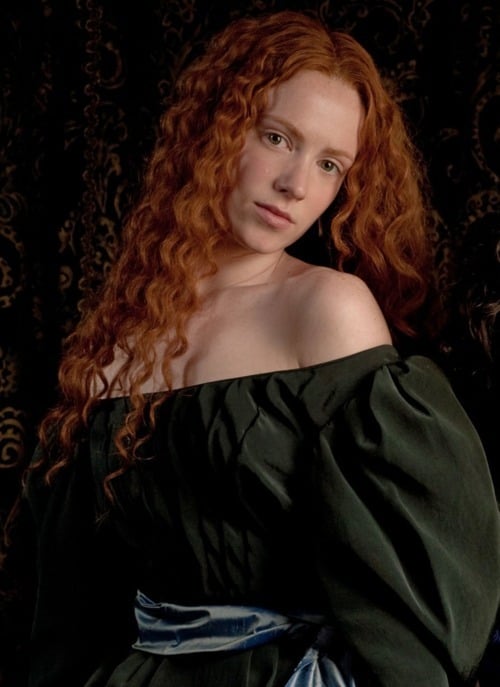 Speaking of her hair, I have spent an inordinate amount of time trying to figure out if that was Amy Manson’s natural hair dyed red, or just a REALLY REALLY GOOD lace-front wig. Those of you who are fans of the original UK version of Being Human (2009-2013) will recognize her as the vampire Daisy from season two in which she rocks the brunette curls pretty hard. Another thing about Lizzie in this show — her eyes are this amazing pale green/blue/light hazel/amber color that is constantly changing depending on the lighting, and like the red hair, I’m left wondering if Manson was wearing dark contacts in Being Human (her eyes look straight-up brown in that show) or if she had the world’s most amazing light-colored contacts that don’t look the least bit fake in Desperate Romantics. If so, can someone send a pair to Jenna Coleman in Victoria?

It could also be post-processing color tweaks done to the film… Yes, this shit keeps me up at night. Anyway, moving on.

Another thing about the hair on the principle women in the cast… There’s definitely a thought process as to why they wear their hair down and when, so when I hear people sneering about the lack of hairpins in the show, I gotta wonder if they were paying attention at all. For starters, the two main female characters, Lizzie and Annie, both have their hair loose regularly. I’ve already mentioned why Lizzie gets a pass in this department, but the reasoning behind Annie’s hair is also interesting.

Annie Miller is William Holman Hunt’s muse/girlfriend, and when we first meet her in the show she’s basically, well, a whore. Hunt sees something in her, though, and substitutes her face in a painting that was originally modeled by Lizzie. This starts off a weird little love affair between Annie and Hunt that closely parallels Pygmalion. Hunt decides to make Annie his “project,” to give her reading and writing lessons and teach her proper comportment and etiquette so that they one day might “step out together” and be seen in public as a proper courtship, not just artist and model. So, the costumes and hair on Annie’s character reflect this evolution — she goes from a wild-haired and grubby little strumpet, to presentable lower-class young lady (though still not “appropriate” girlfriend material at this point, as evidenced by the fact that while her hair is washed, it’s still down). Eventually, Annie graduates to “proper” and even a bit “posh,” and she begins wearing her hair up when she’s not modeling.

The third major female character, Effie Gray, is far more confined within her role as the repressed wife of John Ruskin. The scenes that feature her are the polar opposite of the scenes featuring Lizzie and Annie — while the other two girls get open, airy environments and space to move about, Effie is almost always seen restricted to her dark, oppressive sitting room, sipping tea like an overly tightened spring about to break. Also in keeping with her status as the member of upper-class society and wife of an important writer and critic, Effie’s clothing is prim and her hair is always styled (with the sole exception of the scenes where she is in bed). 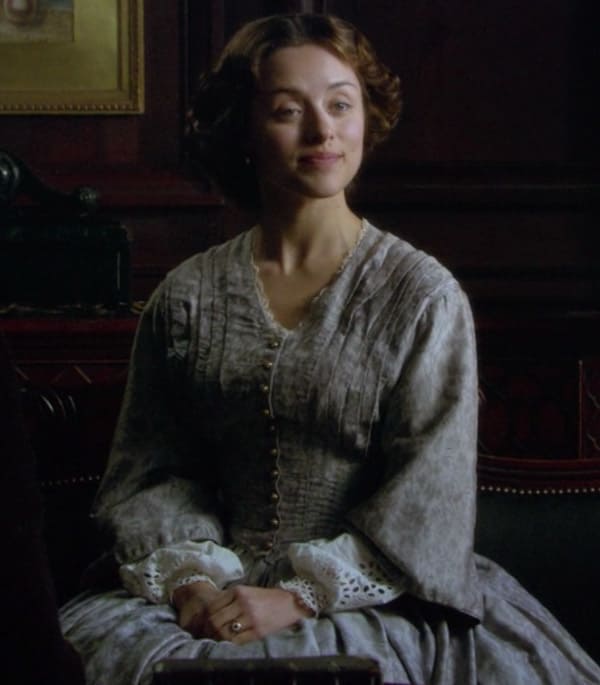 And just for a little comparison, here’s a portrait of the actual Effie from shortly after her marriage to Millais. 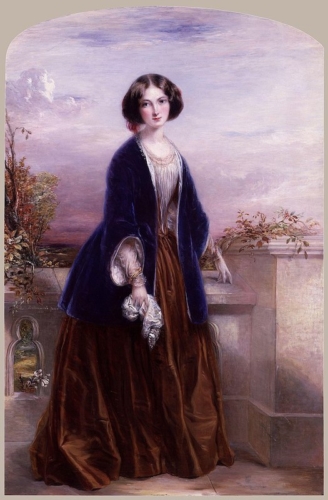 And finally, the last significant female character, Jane Burden (who only appears towards the end of the series, so while she’s important, she has far less screen time than Lizzie, Annie, and Effie). Jane isn’t upper class, but she’s solidly upwardly mobile middle class. She works in a tea shop, but she is engaged to William Morris, who is wealthy and from a good family. Her clothing and hair follows Effie’s more closely than either of the redheads (is it surprising that Jane is also a brunette like Effie?). Her hair is always up, and she’s always shown dressed in dark colors that accentuate her pale skin and dark eyes. 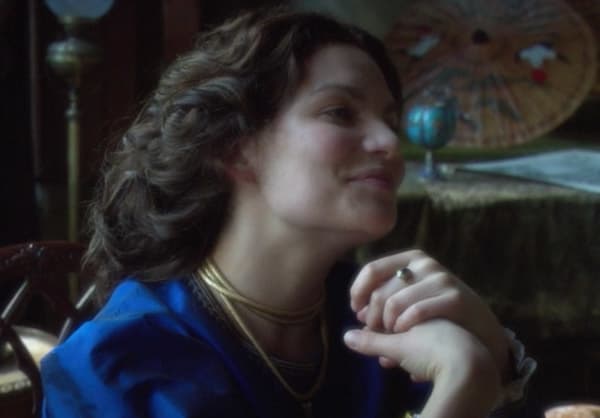 One of the things I really liked about the show was that there was some effort to cast actresses who looked like the people they were portraying. Here’s a photo of the real Jane Morris for comparison: 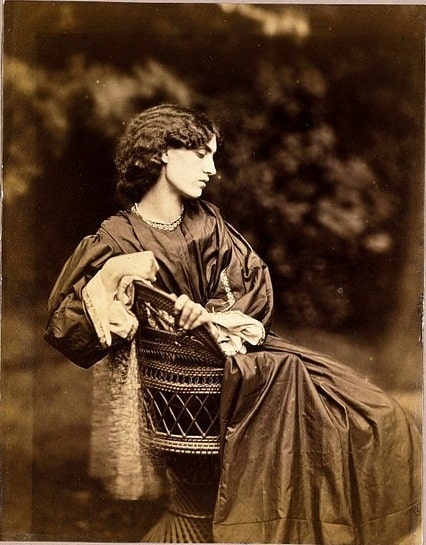 Some other elements I really liked about the costumes were with regards to the men’s outfits. There was a lot of layering of waistcoats and jackets and robes and different combinations of color and texture going on that gave this really visually interesting component to their costumes.

Aidan Turner as Dante Gabriel Rossetti. I love the layered waistcoats, something that occurs frequently with Gabriel throughout the show. 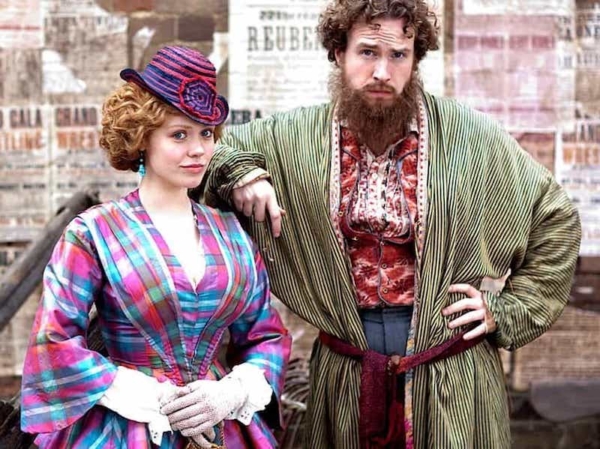 Rafe Spall as William Holman Hunt, right after he returned from the Holy Land. 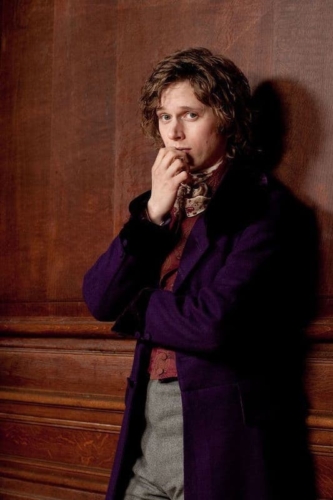 Samuel Barnett as John Everett Millais, child prodigy. He gets some of the best dialog in the show. 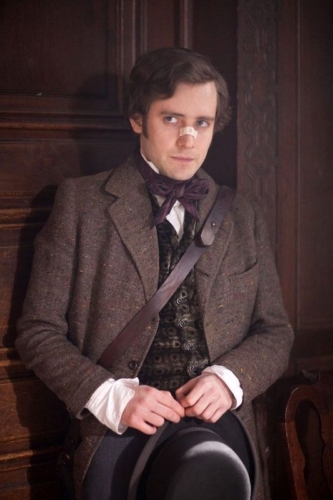 Sam Crane as Fred Walters, a fictional character made up of a couple different historical figures. The show is told through his voice.

So, to wrap this up, if you haven’t watched Desperate Romantics, WHAT THE HELL IS WRONG WITH YOU??? I mean, I hope you enjoy it!