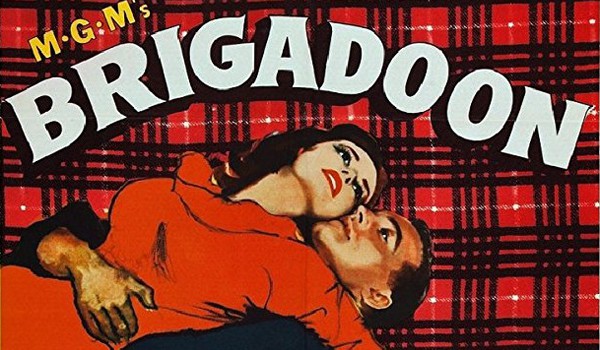 Before Outlander, before Braveheart, perhaps no screen production influenced how Americans thought of Scotland more than Brigadoon (1954), which was a Broadway musical in 1947 before being adapted for film. Surrounded by swirling tartans and misty heather-covered moors (filmed in MGM’s soundstages), Gene Kelly and Cyd Charisse were the doomed, time-traveling lovers of their day. Brigadoon tapped into the 19th-century tartan mania built up by Sir Walter Scott and his ilk, and the musical stoked the flame tickled by spate of earlier Scotland-themed films like Mary of Scotland, plus popular Tin Pan Alley ‘Scotch’ comics. All this made for one heapin’ helping of Scottish cliches in a rainbow of plaid and tam o’ shanters, bleeding with bagpipes, and loaded with lochs. The story begins with two present-day (for the ’50s) New York guys on a hunting trip in the Scottish highlands who get lost. Wandering through the mists, they stumble on the little town of Brigadoon, which has been preserved in time, totally unchanged, for 200 years, and it only pops up on the modern map one day every 100 years (hey, time travel back to Scotland, sounds familiar…). The guys quickly get involved in the town’s happenings, invited to a wedding, cause problems, and, most importantly, one of the fellas falls in love with a local gal. Songs are sung, dances are danced, true love is almost thwarted, but not really. Charlie’s getting married in the morning! Wait, wrong musical. Tommy and Jeff serve up some soft shoe in trade for highland flings. Sisters Jean and Fiona discuss the former’s impending wedding and pretend to know something about weaving lace. While the plot is fairly predictable, what’s more interesting is seeing how many Scottish stereotypes are packed into the 100 or so minutes of this movie. Brigadoon capitalized on previous ideas and helped make them concrete in American mass media so subsequent movies and TV shows could use them with abandon. The costumes in Brigadoon are made for dancing more than anything, and this is most apparent when Gene Kelly and Cyd Charisse are on the move. Although the neckline on this dress really bugs me. But hey, her dress has pockets! This is only a promotional image, but dayum, I love it, and the waistcoat / shirt look is vaguely reminiscent of 18th-century women’s riding habits, so it’s the most historical costume so far. Charlie and Jean’s wedding, so pretty. Oh look, in the background, there’s her sister, Fiona… Fiona and Tommy, in a big clinch. Her red dress in a key scene. Makes you wonder. Tommy has to go back to his timeline … or does he?

Are you waitin’ for my dearie in Brigadoon?