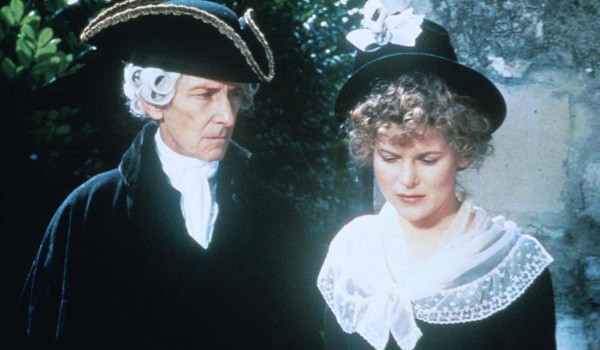 New readers should be made aware that, despite my lifelong study of Victorian literature, I rather dislike the works of Charles Dickens. So it’s no shocker that I hadn’t seen this 1980 adaption of A Tale of Two Cities, though it’s a little surprising that this is one of the few Dickens books I wasn’t forced to read in grad school (where I had an especially Dick-obsessed professor). But Kendra has this crazy idea that we should invade the SF Bay Area’s Dickens Christmas Fair wearing 18th-century costume because A Tale of Two Cities seems to be the only Dickens’ work they leave out of the event. Thus, I wanted some background on the story, and Amazon Prime came to the rescue. There’s also a four-part BBC adaption available on Prime, but 155 minutes was all I wanted to bother with. 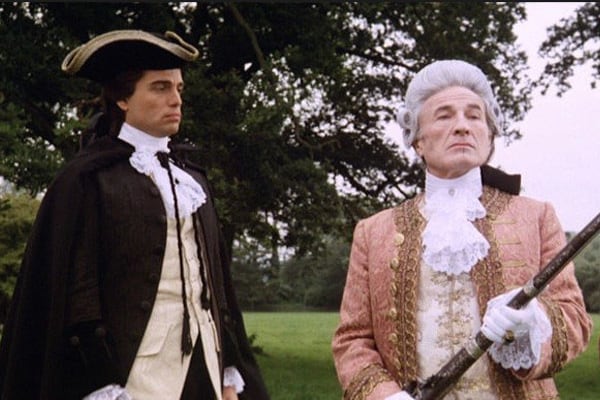 Sure, it’s the best of times and the worst of times, that much is obvious, but the two cities aren’t. Paris and London, I guess? Does the book make this clearer? The difference between the cities isn’t all that obvious, until one (Paris, duh) is overrun by a mob with a guillotine. Though maybe Miss Pross (Flora Robson, woot!) going on about being an Englishwoman and a subject of King George is supposed to make the point of how different London is from Paris? And yet, she’s the one who inadvertently kills Madame Defarge, so it’s not like she’s above the fray. IDK. 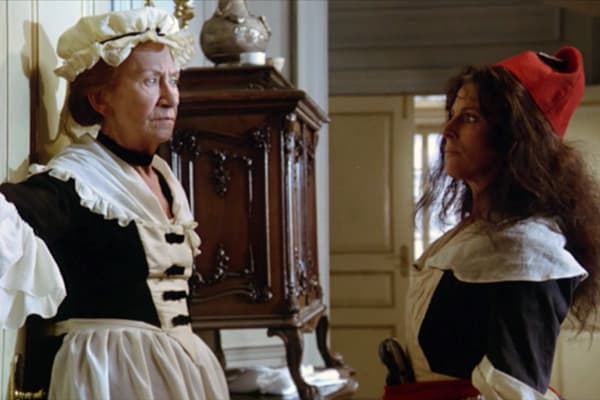 Really, this is a sappy love story with some historical window-dressing. All the boys are hot for Lucie Manette, she marries Charles Darnay (who’s secretly a French aristocrat), and his lookalike Sydney Carton pines after her until he can give his life for her. Meet cute and die. Boom! I really liked Chris Sarandon in the double lead role as Darnay / Carton — he had this pouty bad-boy thing going with Carton that made his whole face look different enough that I wasn’t sure at first if it was the same actor. 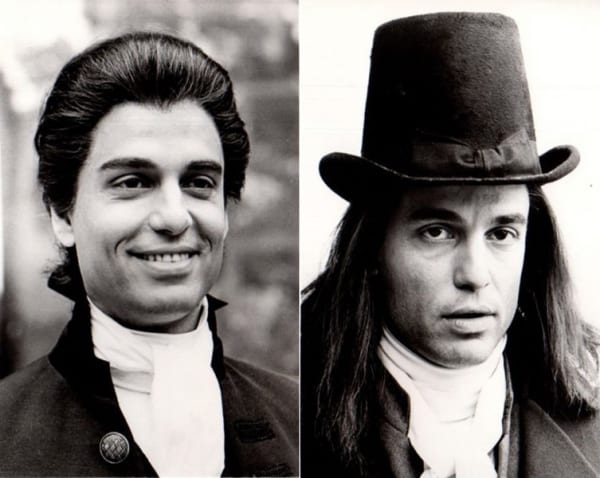 Aristo-faux-Englishman Darnay on the left, drunken lovesick lawyer on the left.

The always amazing Peter Cushing is Lucie’s father, Dr. Alexander Manette, a former Bastille prisoner, adding a level of gravitas. I was annoyed by Billie Whitelaw as Madame Defarge, she seemed incredibly one-note, just REVENGE REVENGE REVENGE. I had no sympathy for her or really any of the lower classes at all. Not sure if that’s this film adaption or Charles Dickens, but I totally sided with the Evremondes in theory. Punishing the second generation for the sins of the first is relentlessly cruel, and in this flick, that’s all Defarge and her lot want. 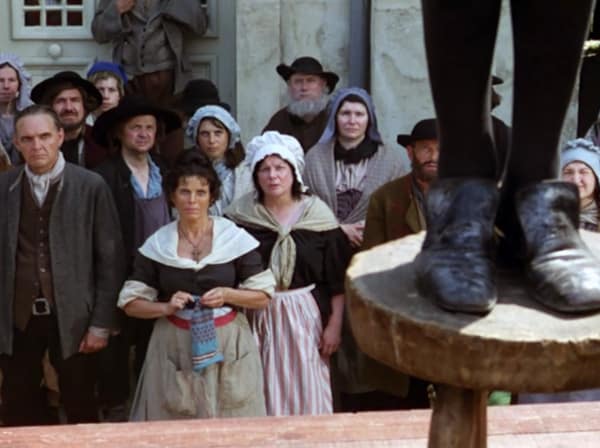 What about the costumes? Well, they don’t totally suck, but they leave something to be desired when it comes to historical accuracy. Most of the women’s 1780s-ish gowns lace up the back when they shouldn’t. The men are mostly wearing wigs, when they should, but they’re often shiny and white, which they shouldn’t be. Poor Flora Robson is stuck in the worst outfits of the flick, ill-fitting, historically inaccurate, and often ugly. For an actress of her high standing, that seems cruel. 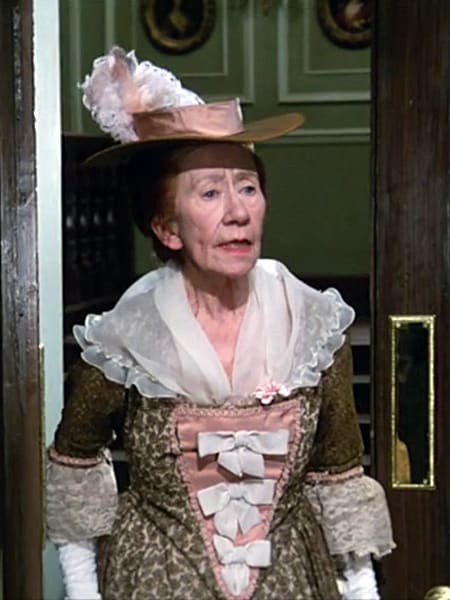 This is the most hideous thing I’ve seen on film in a long time. Also, the hat looks like cardboard. 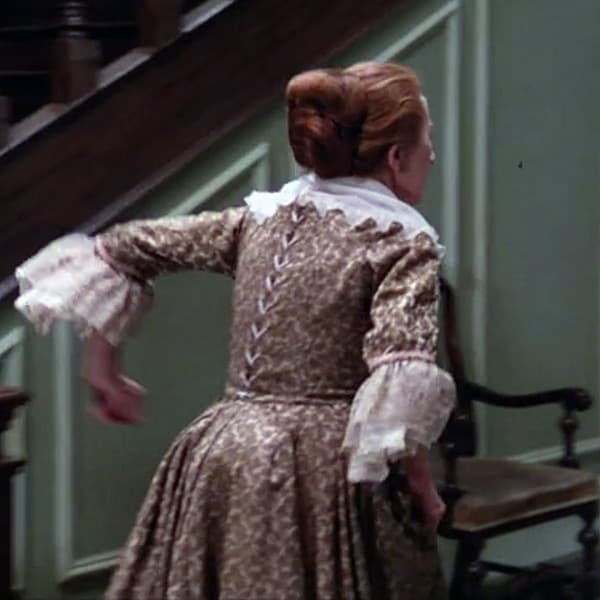 Go search the site for Kendra’s detailed explanation, but suffice it to say, a stomacher means a gown opens on the front, so it does not need back-lacing. 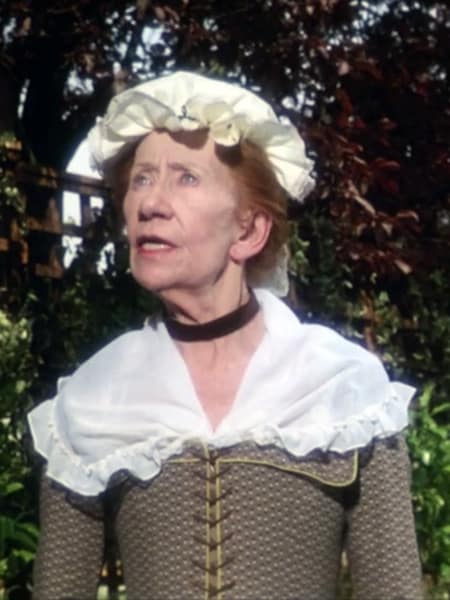 The only nice dress Miss Pross gets! This is smack in the middle of the movie. 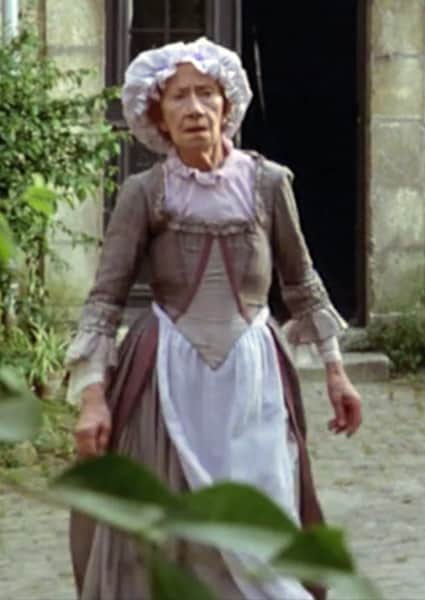 Someone give this woman some bust support, please! And fix that stripe / trim situation, it’s not doing anyone any favors. 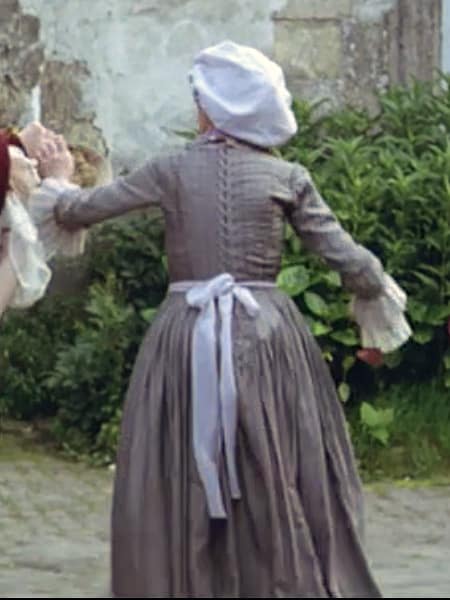 OF COURSE it laces up the back. OF COURSE. 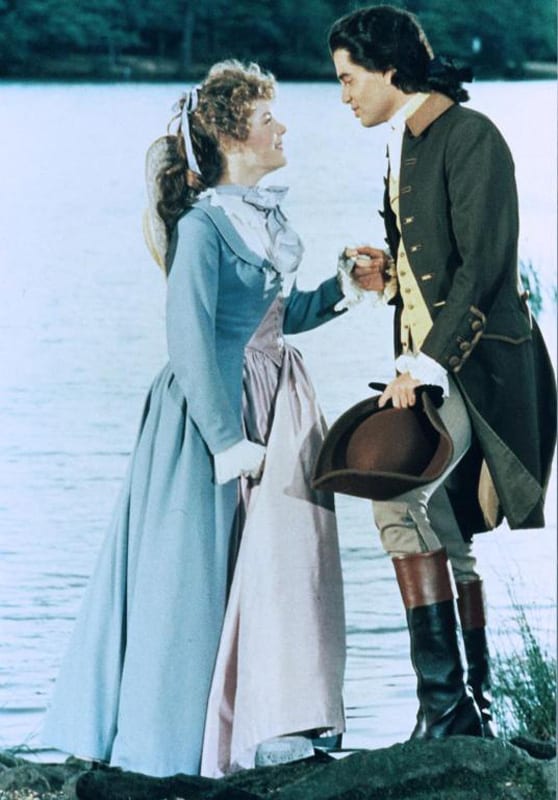 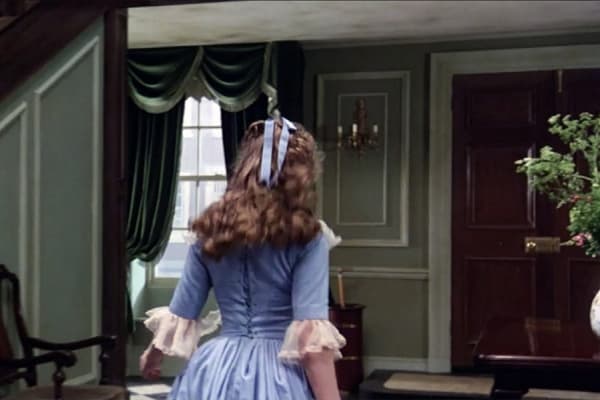 But they have some issues. (And I’m ignoring the trope of “she’s young, so her hair’s down.”) 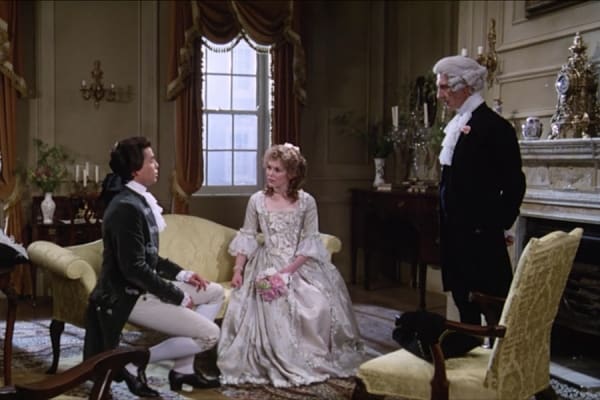 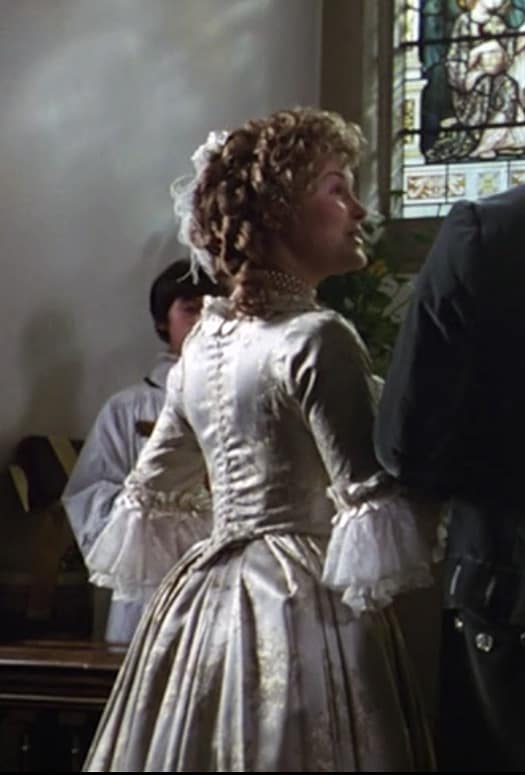 But it’s not a robe a la francaise. WTF is going on back there? Is that a zipper? Hooks & eyes? It’s so wrinkly! 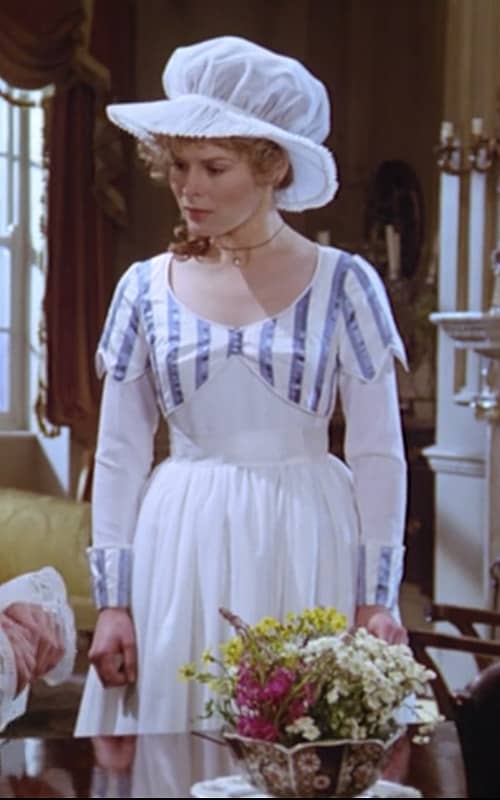 This is a cute dress, & if I squint, I can see that it’s hinting at 18th-c. references. But the shape is off. 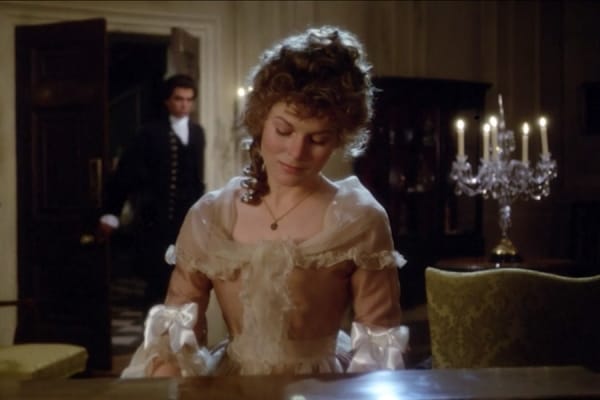 Pretty from the front. 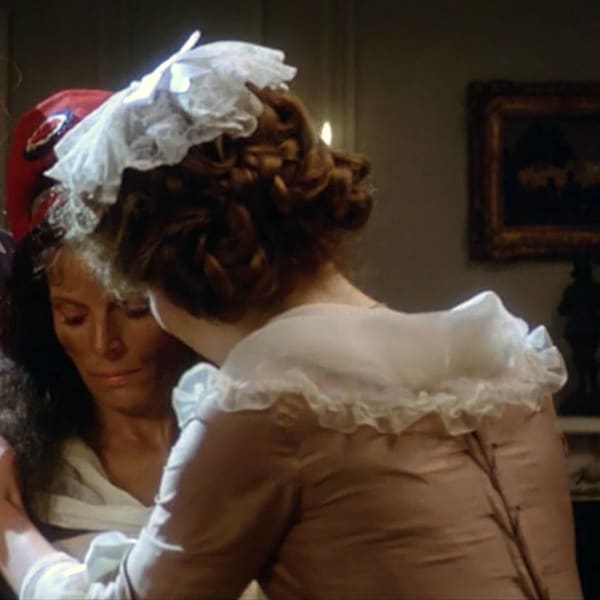 Unnecessary lacing in the back. 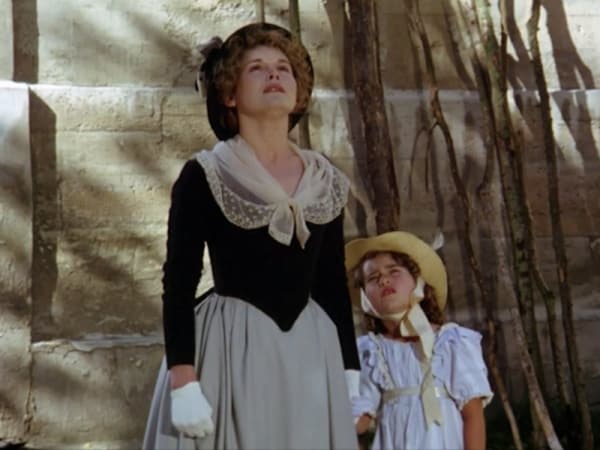 Lucie & the kid visit Canton in prison. This is probably the most successful outfit of hers — the jacket has faux buttons up the front & pert little tails in the back. 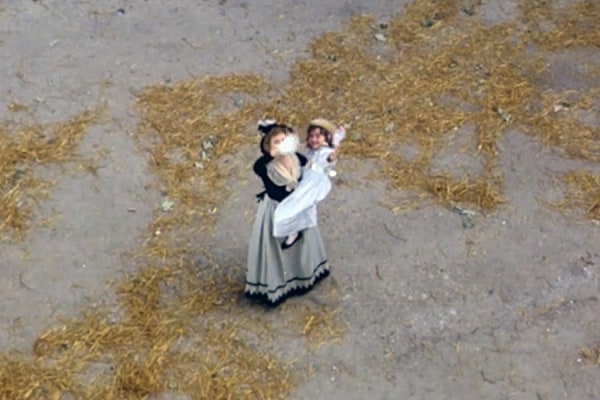 Only in the long view can you see the lovely trim on the skirt that ties the look together.

Have you seen this version of A Tale of Two Cities or is another one your fave?