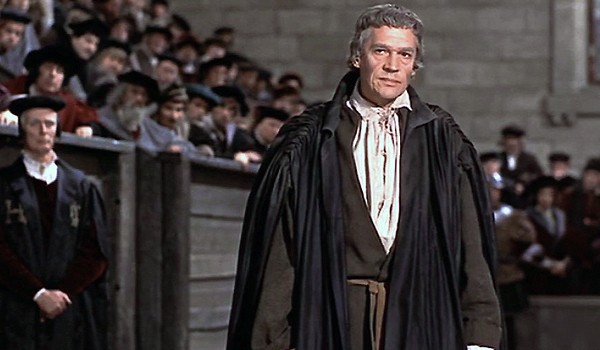 The BBC’s recent Wolf Hall is, of course, not the first look at Henry VIII and Anne Boleyn’s ‘great matter,’ nor even the first look at the tale from a figure at the side of the action. While Wolf Hall takes the point of view of Thomas Cromwell, the 1966 film A Man for All Seasons (based on the play of the same name) tells the story of Thomas More and his reaction to Henry’s desire to set aside his first wife and, almost as an afterthought, break with the Catholic Church. Hilary Mantel, the author of the novels that the TV series Wolf Hall is based on, admits that her work was “up against” A Man for All Seasons, and her version of these historical figures essentially “shake hands” with the versions shown in the earlier film. The 1966 movie won six Academy Awards, including Best Picture, Best Director, Best Actor for Paul Scofield portraying More, and Best Costume Design for Elizabeth Haffenden and Joan Bridge. First, about the costumes — they’re generally quite good for the era; not perfect, and I find some of the fabric choices to be “of their time” (such as Henry in gold lamé). But the silhouettes are historically accurate, and the headgear and accessories are mostly period. I can see a direct line of progression from this to Anne of the Thousand Days to The Six Wives of Henry VIII to Elizabeth R, each one getting a little better, more accurate, and higher quality each time. The king gets a little too much shiny gold, while More’s daughter wears a gown that will be recycled in “Anne of the Thousand Days.” Not the best French hood, but I like how they *tried* to show all the layers that historically went into the item, instead of just plopping a headband on her head. Since this is Thomas More’s story, he has all the best lines, and wow, Scofield is fantastic. He won a Tony Award for this role as well, and his More is a man of principle yet not with a stick up his butt. This More is no Catholic fanatic — many times throughout the film, he states he will not say one way or the other, he will not speak out against what the king does, he will keep his own council. If only he’d been serving Queen Elizabeth who said she had “no desire to make windows into men’s souls,” then More could have kept his head.

But no, Henry VIII is a capricious bully here, which seems fairly accurate. While Henry and More were old friends, all during Henry’s life, he showed that if he didn’t get what he wanted, he was likely to turn on a friend. Catherine of Aragon, Cardinal Wolsey, Thomas More, Thomas Cromwell — all close, trusted companions who met with tragic endings due to King Henry. Not to mention most of his (other) wives, who enjoyed varying degrees of closeness. Robert Shaw portrays Henry as alternately jovial and threatening, and he pretty much looks the part too. Blink & you miss this Anne Boleyn.

Anne Boleyn is much not a part of this play, and Vanessa Redgrave plays Anne in an uncredited cameo with one line. Leo McKern (later Rumpole of TV’s Rumpole of the Bailey) is a nasty, snide Thomas Cromwell. He’s no pal to More — this Cromwell seems happy enough to let More work his way to execution. More nice hoods! And the mean ol’ Duke of Norfolk in pleather.

In my fantasy football version retelling of the entire Henry VIII and Anne Boleyn story, I’d love to cast Paul Scofield’s Thomas More against Mark Rylance’s Thomas Cromwell, and both of them with Keith Mitchell’s Henry and Geneviève Bujold’s Anne. Now THAT would be good theater!