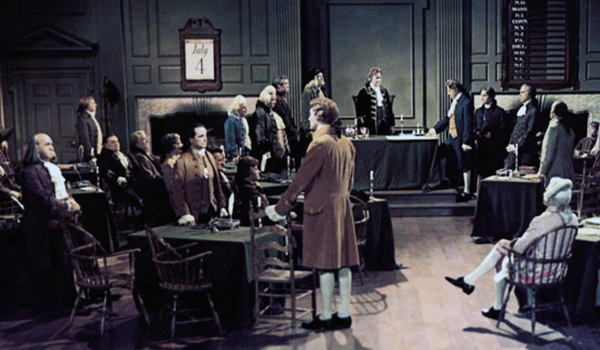 It’s the United States Continental Congress turned into a musical! And as much as I love musicals, 1776 (made in 1972) is frickin’ torture to watch! I might choose waterboarding instead of watching this travesty again. The shitty polyester 18th-century costumes and bad shiny white wigs are one thing, but add in a raft of clunky, utterly unmemorable, barely singable songs, and no real dance numbers (the one “minuet” was cut from the theatrical release), and, well, why is this a musical anyway??? Just go read the Declaration of Independence and be done with it.

But hey, this is the Thursday before our Independence Day holiday so let’s throwback to this miscarriage of political music. John Adams and Benjamin Franklin are gonna force this Declaration of Independence thing through, in a torturous 168 minutes of song. These are the dudes standing in their way.

But first, both Adams and Thomas Jefferson really want to get laid (sadly, not to each other — that would have made this a much more interesting flick). Adams writes his wife, but she tells him, hey bud, I’m not putting out until you send hairpins back home (I kind of love her).

Meanwhile, Jefferson gets a booty call from his honey in the scrotum dress. Who, weirdly, Adams and Franklin get all lovey with first. Many on the interwebs say the violin is his penis. But I’d like to think his skill at playing is an allusion to knowing where her clitoris is. Hey, a girl can dream!

Seriously, this film does make you wonder if America would be celebrating our independence on June 28th if not for all the fucking delays.

When they’re not screwing their women (or talking about it), the fellas sometimes consider the business of state. It’s hard to pay attention to the political subtleties with fabrics that loud. And then there’s the (mostly) southern contingent, resplendent in dead-dino weaves and frocks.

Does 1776 make you feel all patriotic?