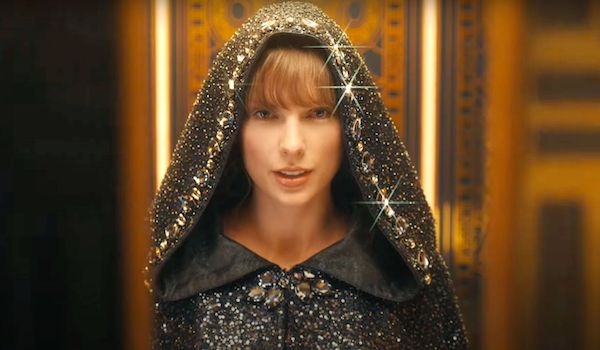 Don’t judge me, but I’ve become a massive Taylor Swift fan — and one of her videos from her just-released album has an 18th century/Cinderella theme. The song “Bejeweled” is actually my favorite on the album — good melody and beat, great theme (she’s been rejected by the guy who she’s into, but who cares because she can still turn all eyes) — and while the video isn’t exciting in a frock flicks/costume way, it seemed like we should post about it, so here we are!

First, here’s the video if you’d like to watch it:

No costume designer is listed on IMDB, but here we go: 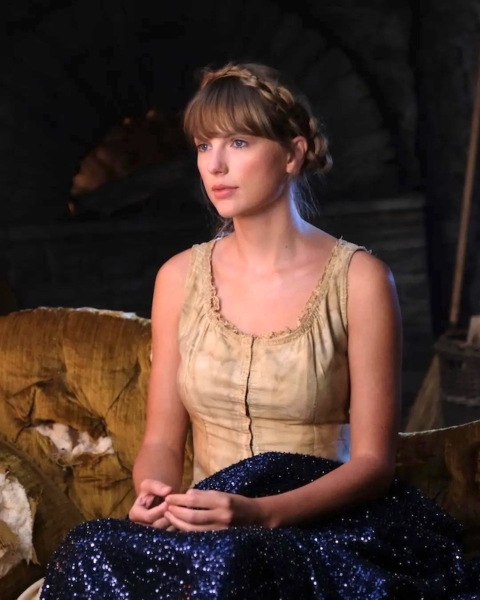 Taylor has been “exiled” to work as a scullery maid for an awful family. She gets to wear a dirty sleeveless sort-of-Edwardian, sort of medieval Lengberg bra blouse and skirt combo. 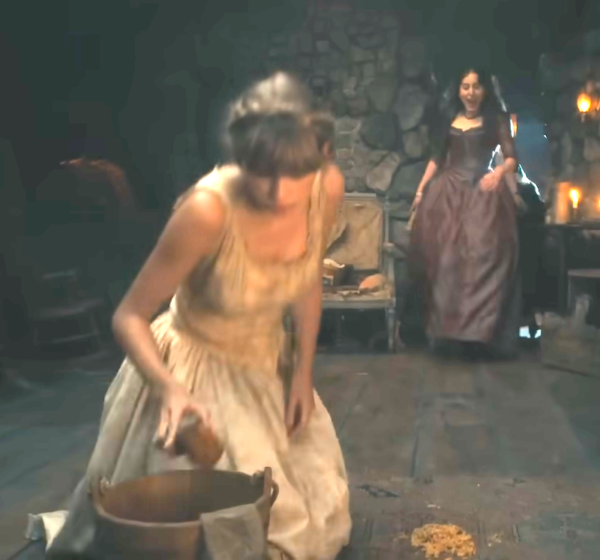 I think the petticoat is attached? 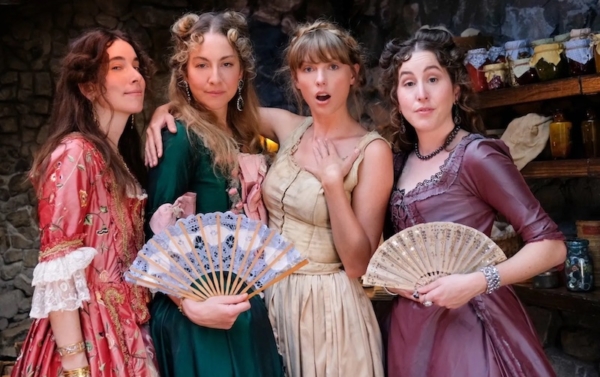 Her awful step-sisters are played by the bandmembers of Haim. The lefthand one’s dress doesn’t fit her AT ALL. 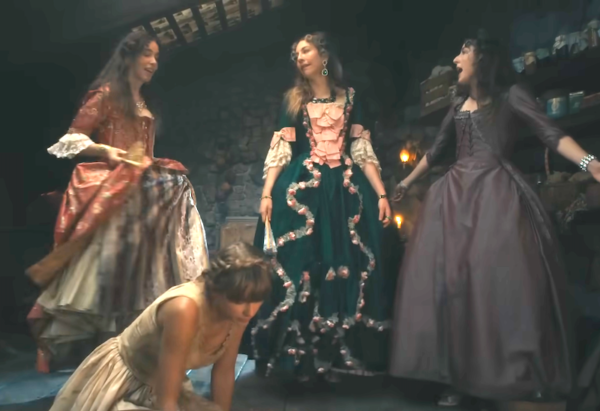 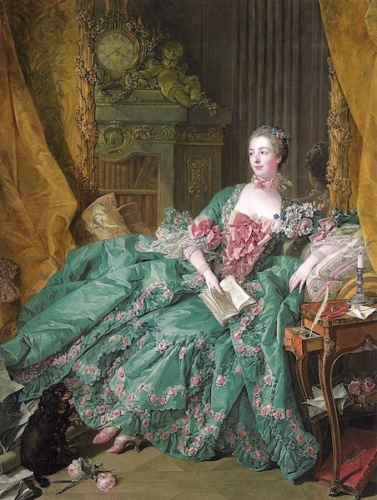 Is wearing yet another gown inspired by this famous portrait: Portrait of Madame de Pompadour by François Boucher, 1756, Alte Pinakothek 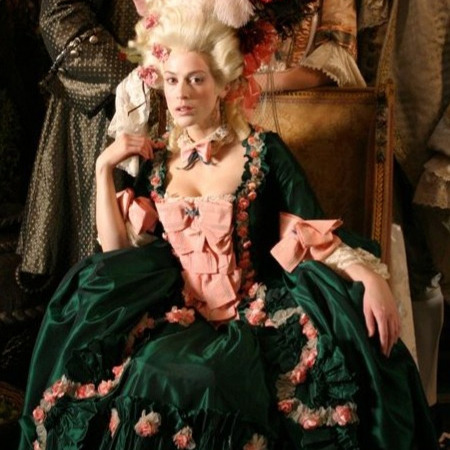 According to Recycled Movie Costumes, it was first worn in a 2007 episode of CSI: NY (what?) and then in a 2017 episode of Encore! – Back to the Woods.

What I don’t get is why everyone who reproduces it — and it has been reproduced a TON — never does it in its original colors? Dark green, dark blue, whatever, none of them are very 18th century, and what, does Pompadour’s color palette suck or something? 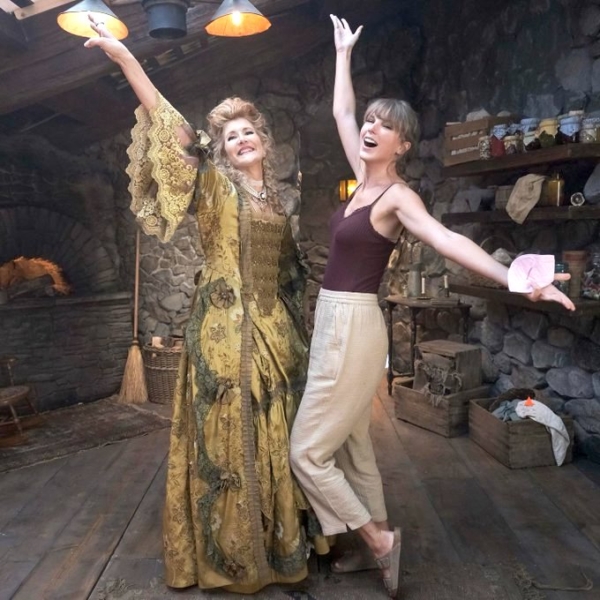 Laura Dern plays the step-mother. Her dress has great serpentine trim on the skirts, but is sadly missing hoops. 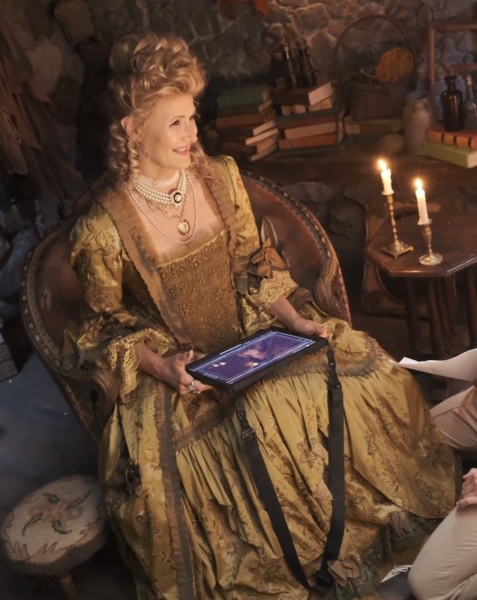 Her hair lists forward in a very Edwardian pompadour sort of way. 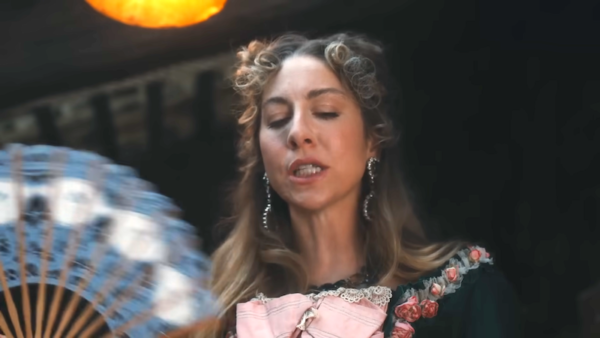 Of COURSE the step-sisters have Battenberg lace fans, just to annoy me! 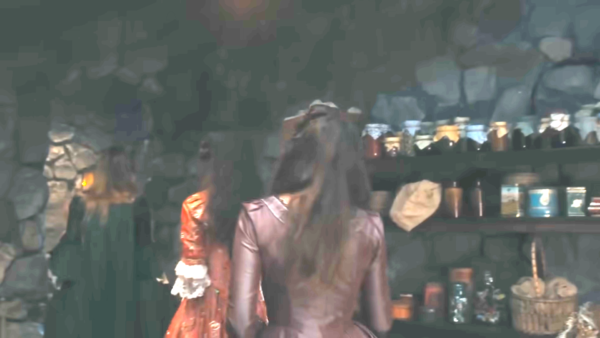 At least nothing is back lacing? 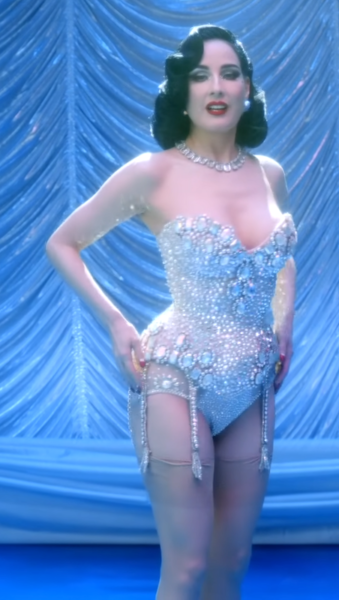 Dita von Teese randomly shows up as the fairy godmother. I only figured out that was supposed to be her role by looking at the credits on IMDB. She does look gorgeous as always! 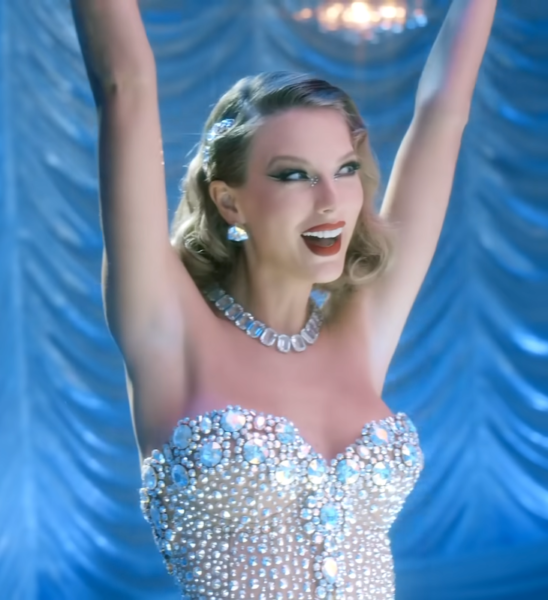 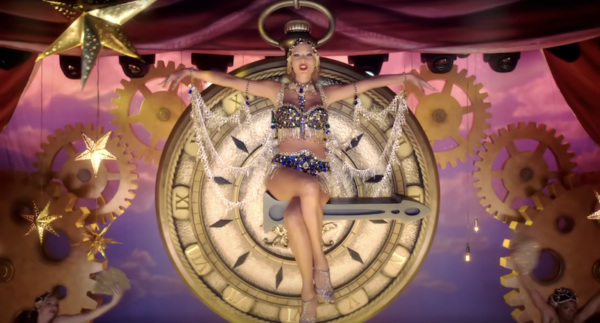 Taylor then goes on to do some kind of 1920s burlesque stage performance? 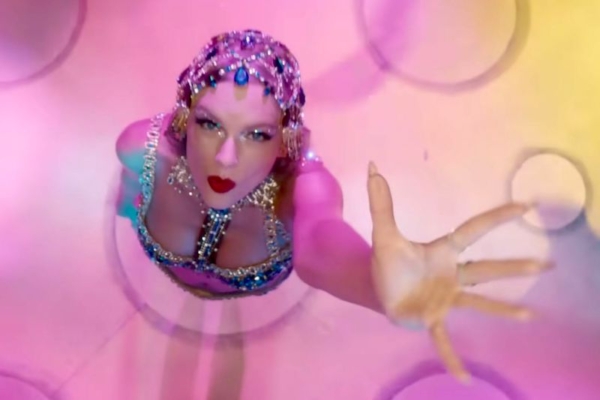 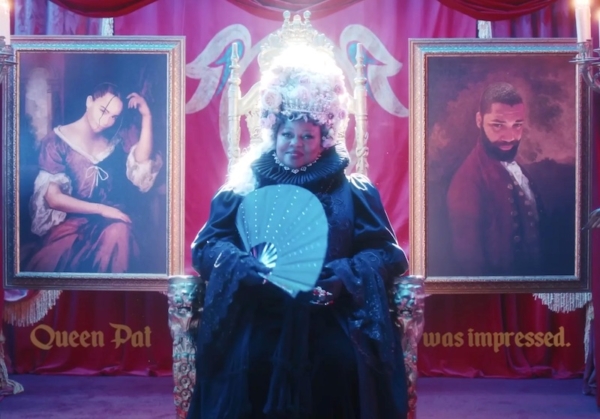 “Queen Pat,” aka makeup artist Pat McGrath, approves. She’s in a faux-Renaissance outfit (I think?) with a ruff, although with a bad faux-18th century wig, and I’m unclear about why she’s surrounded by portraits of randos. 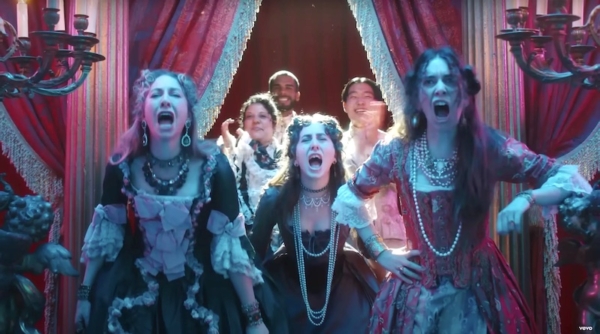 The step-sisters are PISSED; maybe because they have to wear the same outfits to the ball? And are clearly victims of hairpin rationing? 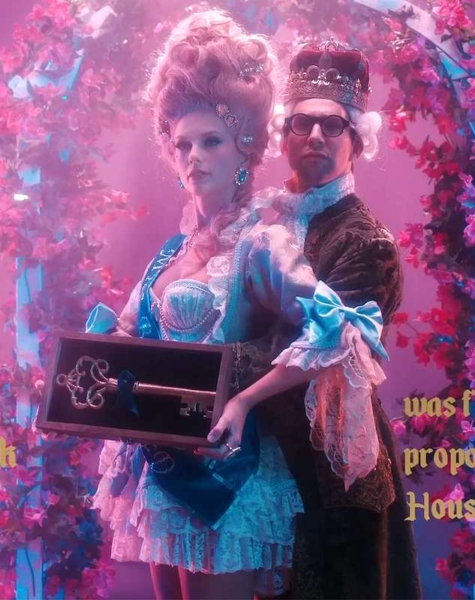 Taylor “wins” the prince in an 18th century-esque burlesque outfit. Brits will hopefully understand when I say Girls Aloud did it better. 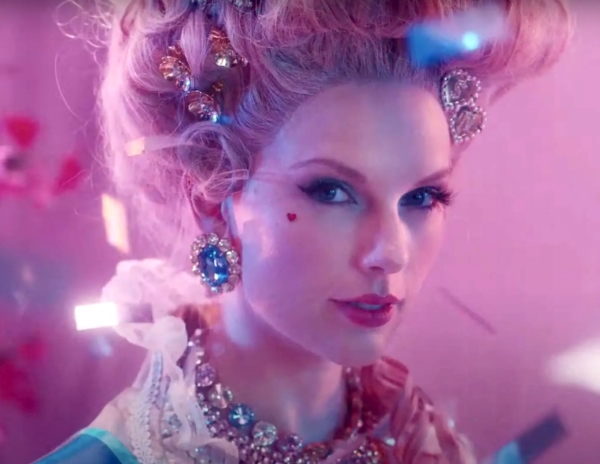 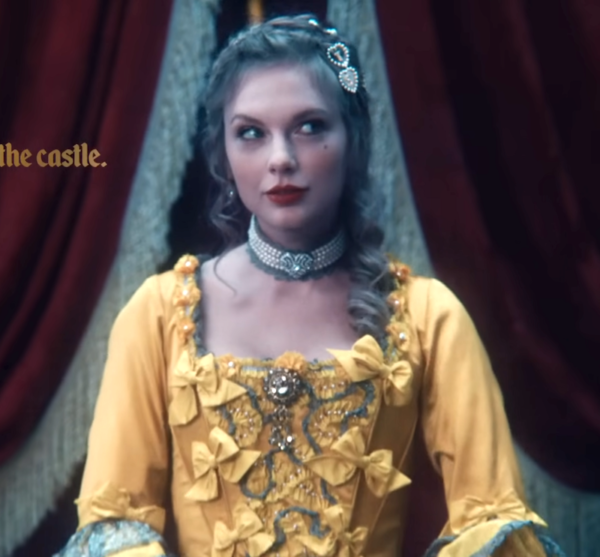 In the end, Taylor ghosts the prince but takes the castle, which she enjoys in this yellow française. 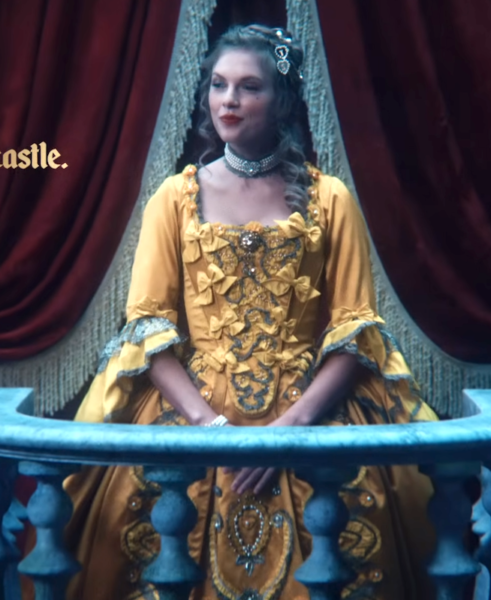 Which has pretty silver trimming. 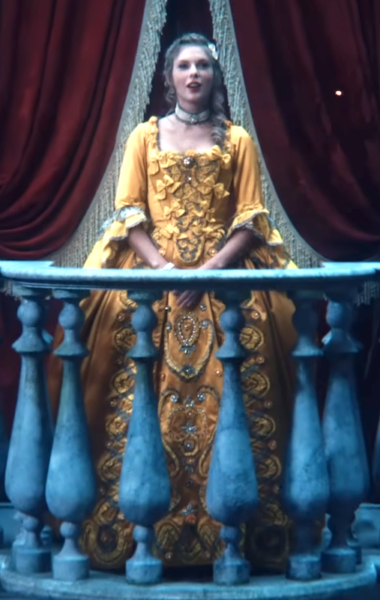