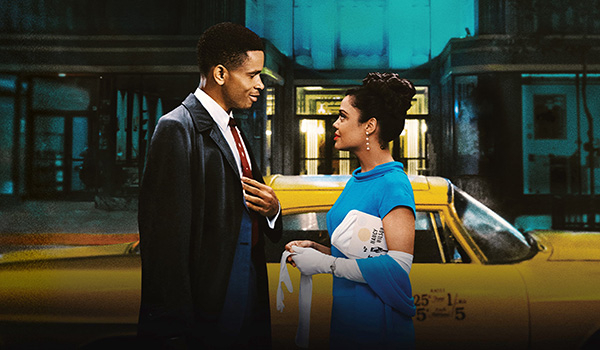 For a light, sweet romance, you’ll do no wrong with Sylvie’s Love (2020) produced by Amazon. Starting in 1962 New York and then flashing back five years earlier, this movie stars Tessa Thompson as Sylvie, an upper-middle-class woman whose father owns a record store. Nnamdi Asomugha is Robert, a jazz musician, and in the flashback, he starts working at the store and begins a flirtation with her, even though Sylvie’s engaged to an upscale fellow who’s serving in the Korean War at the time. (Bridgerton fans may be excited that Regé-Jean Page has a small role as one of Robert’s band members.)

The first half of the story is a pretty straightforward romance, and it feels like the class difference between Sylvie and Robert will be the big conflict. It is, but it isn’t, and the story broadens in a way that’s equally enjoyable to watch. While the “love” in the title obviously refers to the relationship between Sylvie and Robert, that “love” is also revealed to be Sylvie’s own love for her career and her personal strength. So it’s pretty awesome to see, not only a joyous period Black romance, but also a historical Black professional woman. And all done in appropriate and excellent late 1950s / early 1960s clothes designed by Phoenix Mellow. 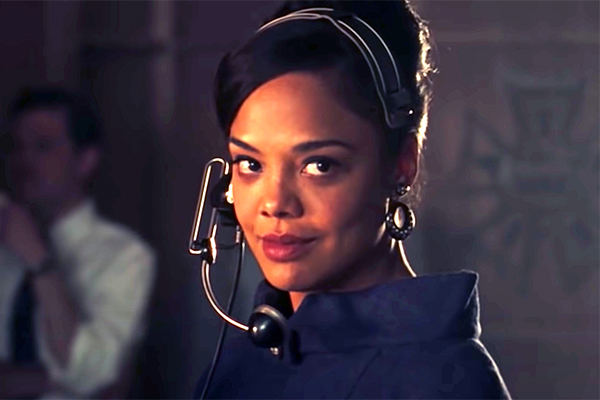 She said in Elle of costumes: “80 percent was vintage, 10 percent was made, and 10 percent modern.” The modern pieces included several haute couture dresses from Chanel that Mellow accessorized to seamlessly blend in to the period. The striking teal blue evening gown that Tessa Thompson wears in the very first scene is from the Chanel resort 2011 collection, worn with a dyed-to-match shawl and vintage lucite heels, white patent clutch, and pearl drop earrings. 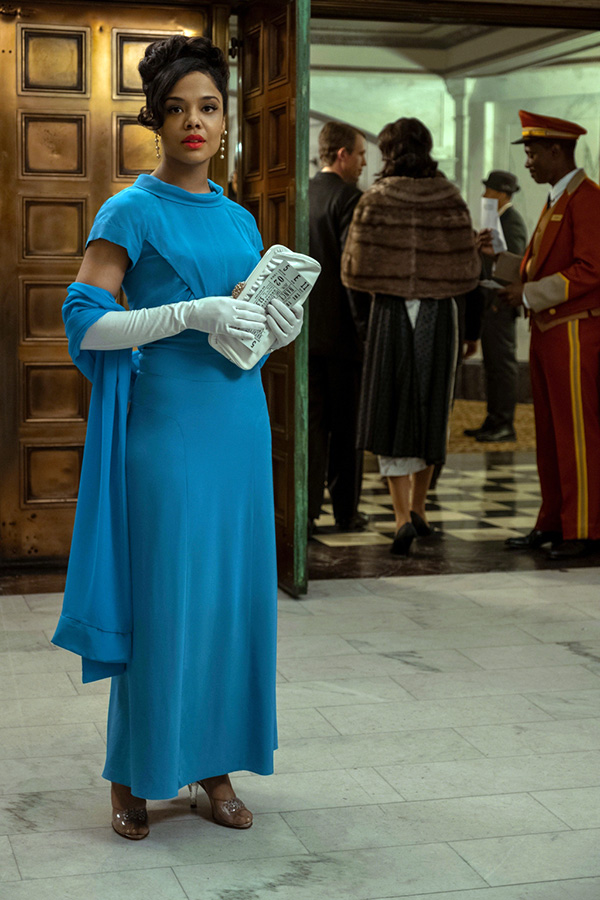 “That white collar framed her face so perfectly. We did a rhinestone earring, then the velvet opera gloves, the velvet belt, and these awesome shoes with rhinestone buckles. She needed to be this beautiful statue that Tessa is. It’s such a high moment.” 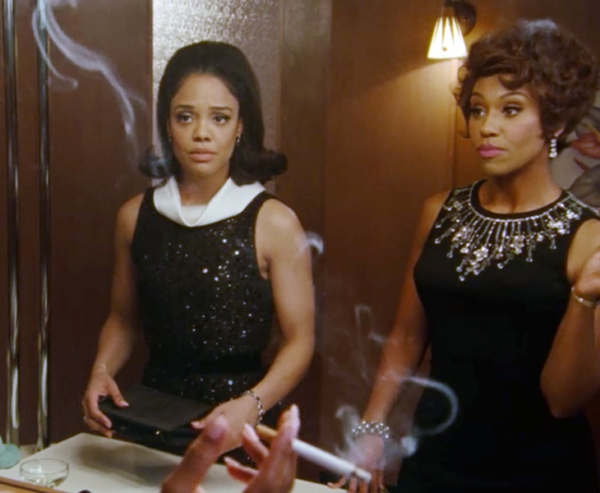 But it’s not all high fashion. Back in the 1950s part of the story, there’s a more teenage vibe when Robert and Sylvie meet. Mellow dressed Tessa Thompson in vintage jeans, tops, and swimsuits for these scenes, saying:

“I brought in the rock ‘n’ roll denim for her. The turtlenecks were very popular and the cropped cigarette trousers, but not overly sexy for her. There’s still a youth and innocence about her relationship and her life.” 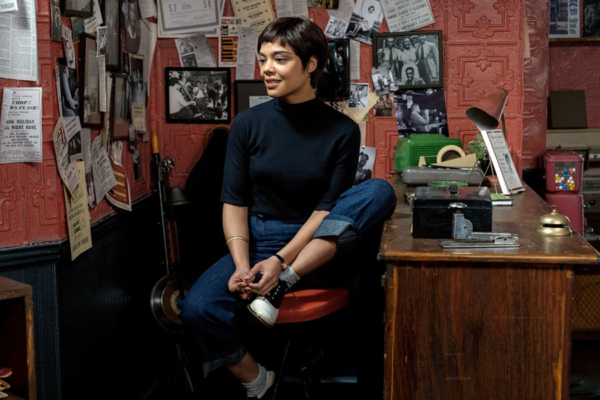 And for the first time Sylvie sees Robert play at a jazz club, she wears a New Look style dress in black and champagne. The costume designer elaborated on this one in Elle:

“That is a vintage dress that we really had to repair, touch up, and add on some missing pieces. That look for me was very Audrey Hepburn in ‘Roman Holiday.’ ‘Love in the Afternoon,’ and even ‘Funny Face.’ It feels so elegant and chic. She’s showing up to this club to see this guy that’s not her husband. She doesn’t want to stand out and seem like she’s showing off to him in any fashion. She is opposed to falling in love with this guy. I didn’t want her to show up and be super flashy. Letting it all be simple … simple love.” 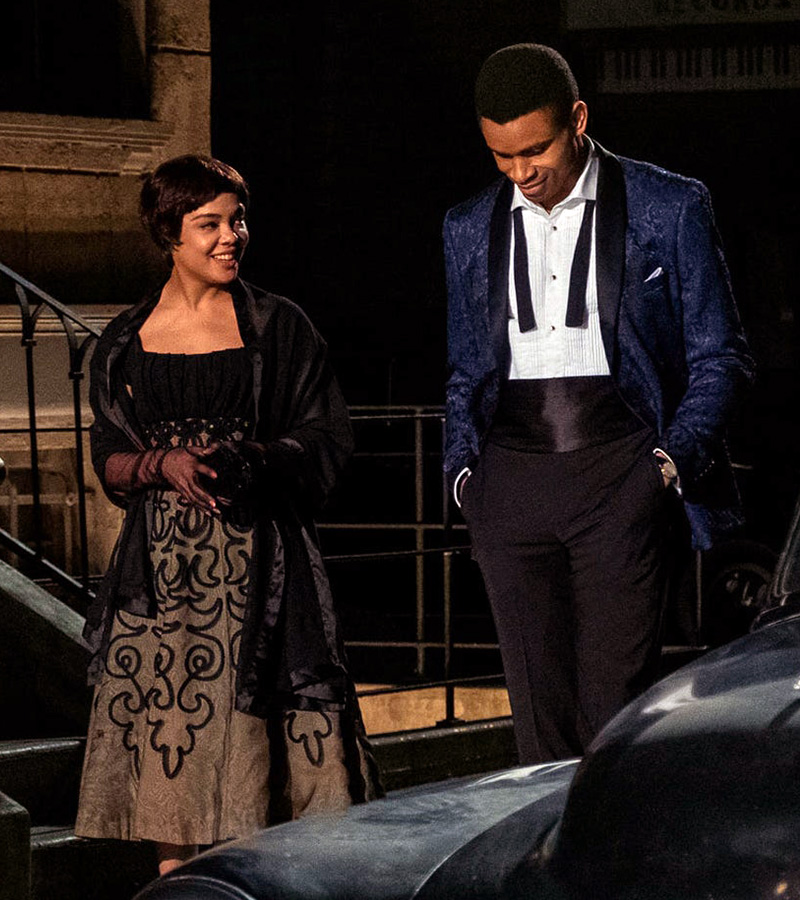 Sylvie’s hair changes from a gamine pixie cut in the 1950s to a longer flip in the 1960s. In a Variety Q&A, hair designer Carla Farmer said the ’50s style was also inspired by Hepburn. Hair designer Linda Villalobos noted that their staff only used equipment that would have been available in the period: “No electric curling irons; there was no blow-drying. It was all marcel iron.” 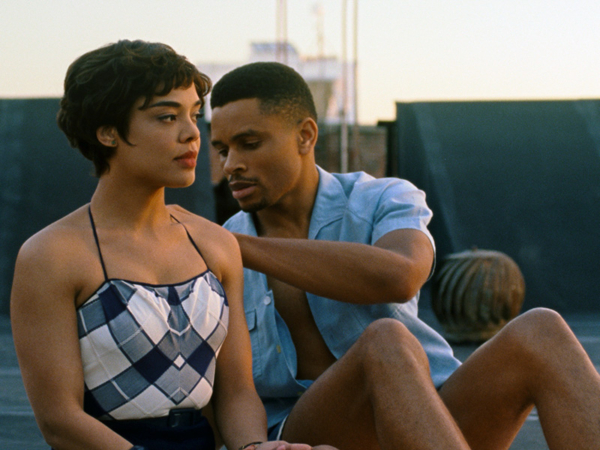 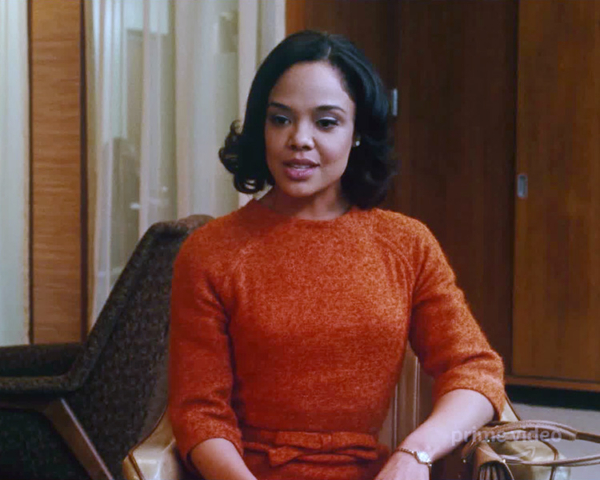 Those ’60s hair styles are often accented by scarves, some of which came from the costume designer herself. In PopSugar, Phoenix Mallow said:

“I love using scarves to mix up a classic look. Tessa really pulled these off effortlessly and it felt natural for her character to put it together with her looks. Each scarf has its own character, and they range in boldness. A lot were from my own collection of vintage scarves. In the ’50s, we used smaller floral prints for a more youthful, summer-love look. In the ’60s, we had her wear bolder, more geometric printed scarves that were almost color-blocked. I think a few of them were vintage Echo and Vera Neumann scarves.” 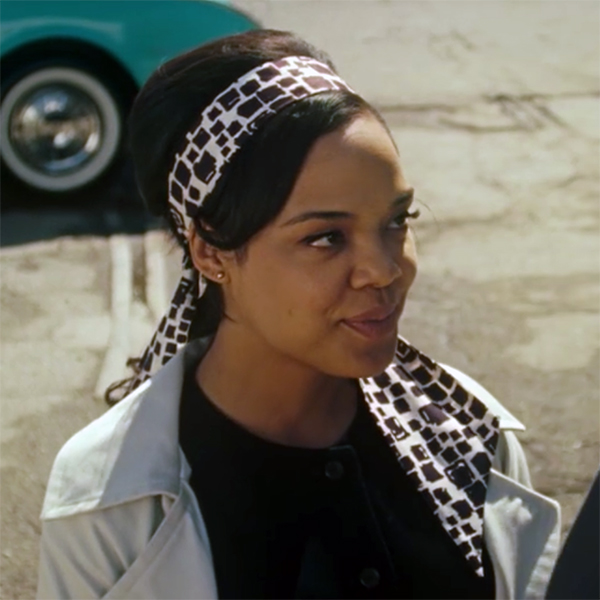 Have you seen Sylvie’s Love? Do you love this vintage style?