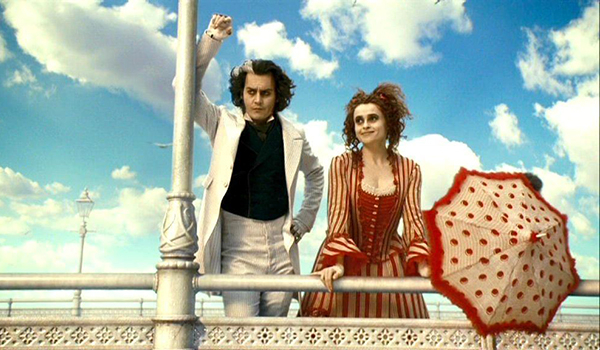 Summer is almost over here in the northern hemisphere, but we barely discussed beaches and bikinis! Well, let’s just rectify the situation in the most Frock Flicks way we can with a look at my personal favorite swim style, the outfits worn by Sweeney Todd and Mrs. Lovett, as designed by Colleen Atwood for the movie Sweeney Todd: Demon Barber of Fleet Street (2007)! OK, this musical is supposedly set in the 1840s, but the Tim Burton movie starring Johnny Depp and Helena Bonham Carter is set in a deeply gothic Victorian London that mixes 1820s tight trousers and cutaway coats on the men with bustle gowns and hoop skirts on the ladies. It’s a bit random except for the gorgeous gothic color palette. And the “By the Sea” scene is definitely a riff on bathing costumes circa 1880 to 1910.

So just what did people wear to the beach at the turn of the 19th century? A lot of clothing, that’s what. Men’s swimming suits were often a knit one-piece with long-ish legs and sleeves, and the suit buttoned up the front. Dark colors were most common, but stripes were also used and have become iconic. 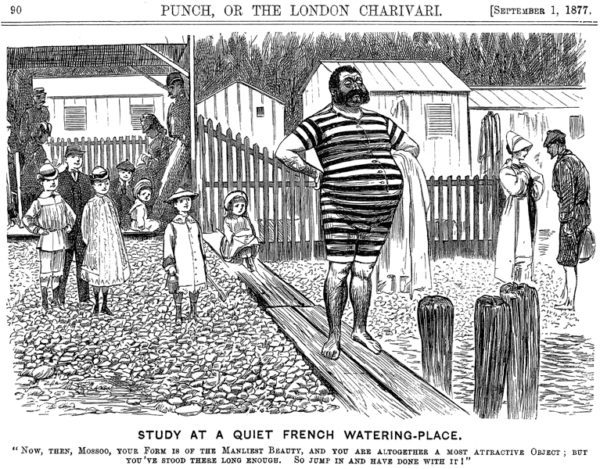 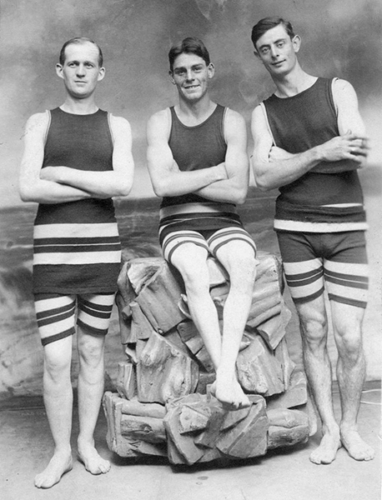 Women’s swimming suits were even more covered-up. Most bathing costumes consisted of a tunic over bloomers, worn with tights, shoes, and cap. The tunic either echoed popular styles of everyday dress in shape, neckline, sleeves, and trim, or a nautical fashion was common. Sailor-blouse tops or middy blouses and pleated skirts gave a very sporty look to women’s Victorian bathing costumes. 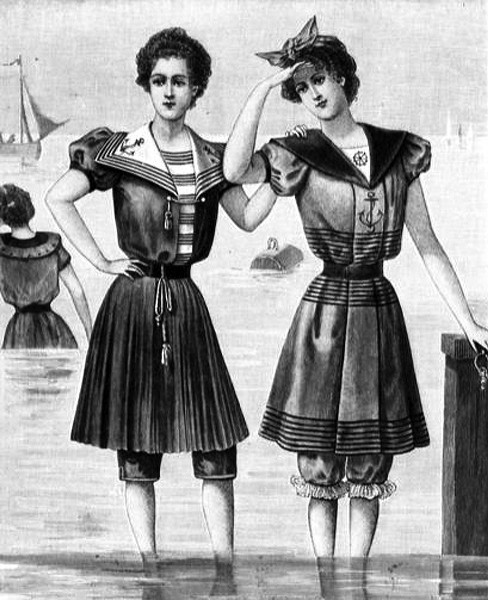 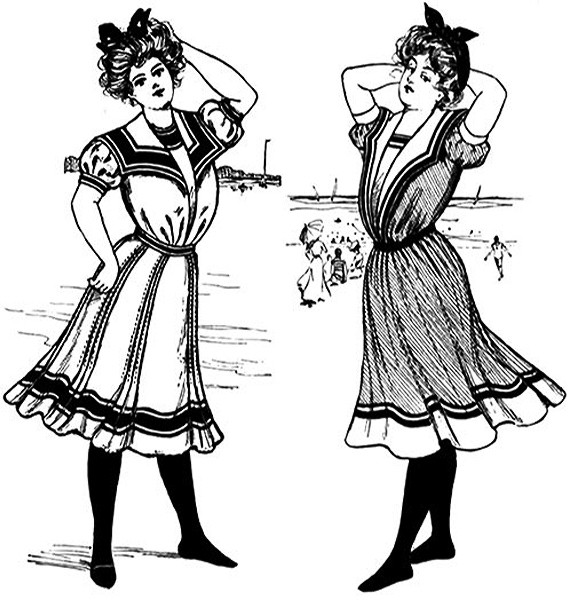 Patterns for women’s swimming dresses, The Delineator (US), 1903. 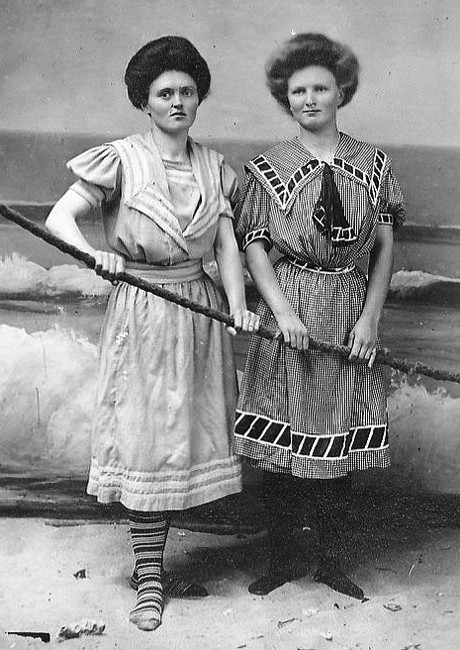 After 1900, a little more skin started to show on both men and women with shorter sleeves or no sleeves and wider necklines. But as the photo below shows, women were wearing corsets under their swim dresses as long as they wore corsets in general! 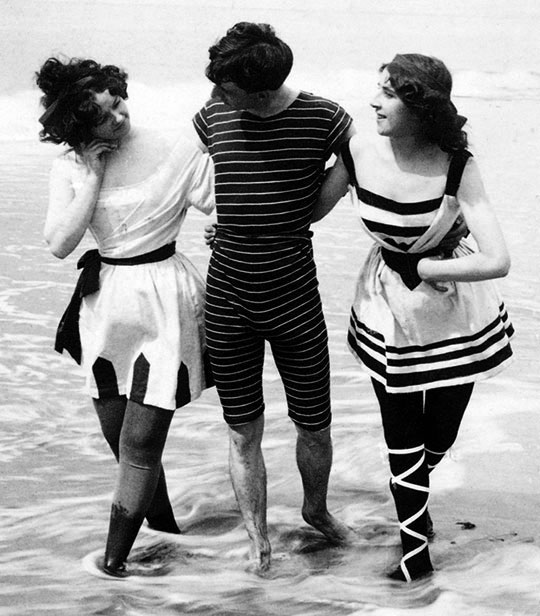 According to costume designer Colleen Atwood, the director wanted the look to be “mid-Victorian without being too precious,” and she tried to combine elements from 1830 to 1865. Of course, in the song “By the Sea,” Mrs. Lovett is dreaming of when she and Sweeney Todd can run off together — “What I dream, if the business stays as good? / Where I’d really like to go in a year or so.” Perhaps this is in the farther future then because the swimming costumes and the seaside promenade costumes look a good 20 years later (Helena Bonham Carter also wears a red and white bustle gown). Also, the song lyric is reverse of what the final costumes are: “Oh, I can see us now in our bathing dresses / You in a nice navy, and me stripes perhaps.” Atwood did note that this scene was radically different in costume design: “It was like a separate movie, in a way,” she said in an interview with the NY Daily News. 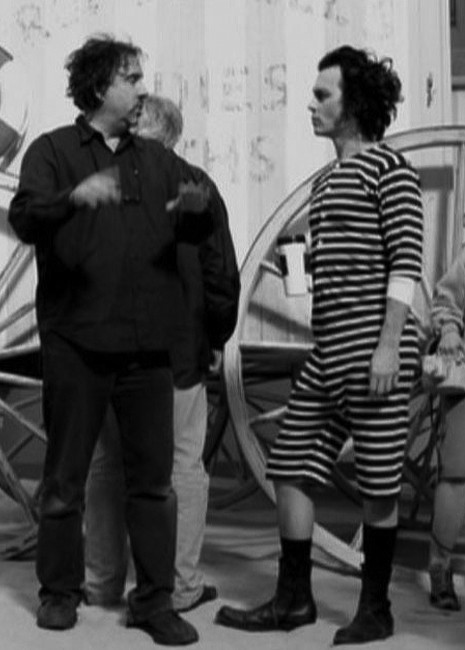 Director Tim Burton with Johnny Depp behind the scenes. 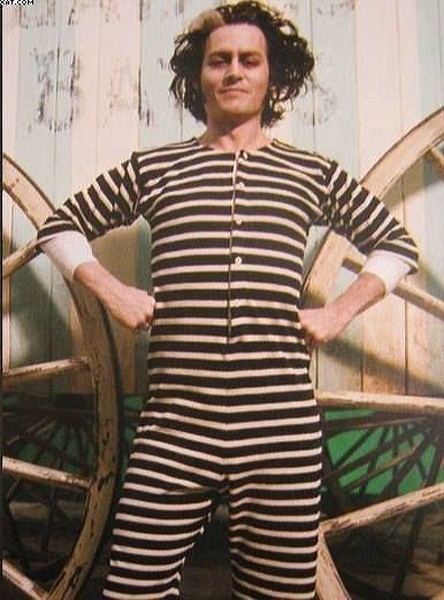 Colleen Atwood said this swimsuit was not one of Depp’s faves at first. But it’s pretty spot-on for a late Victorian or Edwardian men’s swimsuit. 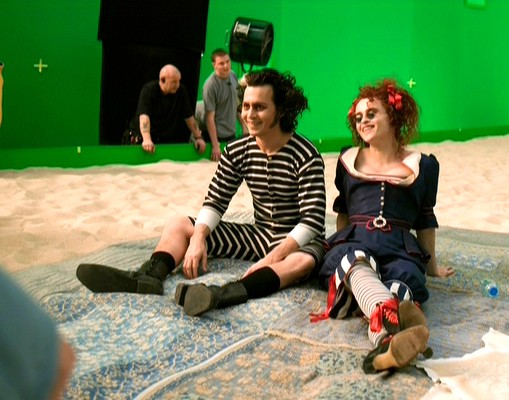 In this behind-the-scenes shot, you can see clearly that Mrs. Lovett’s costume is just bloomers and there’s no skirt; the top only has a pleated peplum. 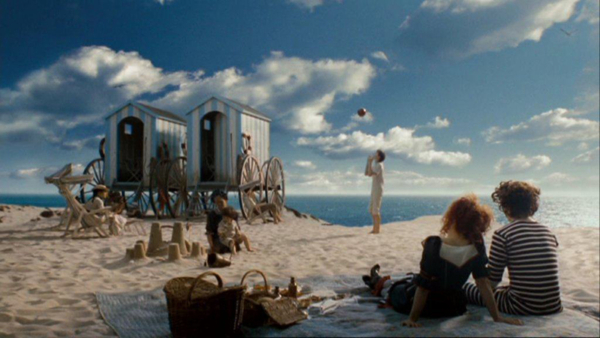 In the movie, we first see the pair from behind. Mrs. Lovett’s costume has a sailor-style blouse. Those type of bathing machines are in beach photos through the 1910s. 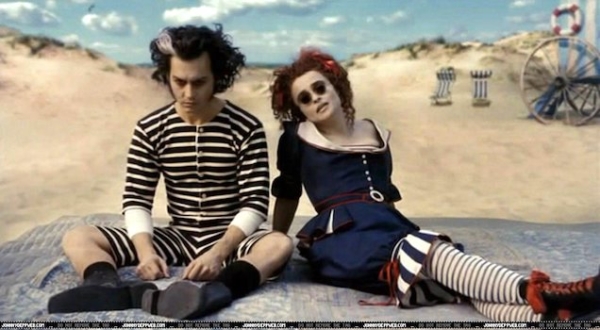 His outfit: Totally Victorian. Her outfit: So close! But she really needs a skirt over the bloomers. 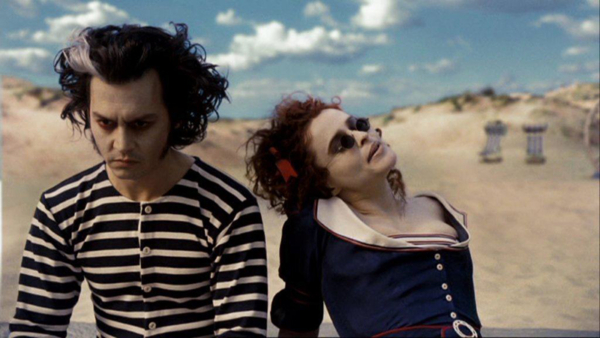 So what do you wear to the beach?