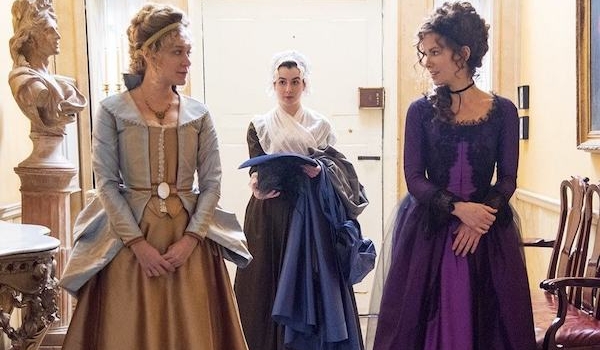 It’s looking a little bleak in terms of what’s coming out over the rest of spring and summer! Luckily we’ve got Outlander to tide us over for a while, plus Brits are getting season 2 of Indian Summers. Hopefully there will be more summer movies/TV shows of interest that just haven’t gotten release dates or trailers yet!

Three stories based on early 17th-century fairy tales. Yes, we know, this one has been kicking around for a while — it’s been on the film festival circuit, and it’s been released in other countries. However, we Americans are finally getting our filthy paws on it!

Houdini and Doyle – starts on Fox TV May 2

“At the turn of the 20th century, the Metropolitan Police were overwhelmed with bizarre cases, so they turned to outsiders including Houdini and Doyle, who collaborated with New Scotland Yard on some unsolved and inexplicable crimes.” This already aired in the UK, but now we get to watch it.

Love and Friendship – in theaters May 13

Based on a Jane Austen story (Lady Susan), directed by Whit Stillman (who hasn’t done any historical stuff, but is a super-talented arty director), starring Kate Beckinsale and Chloe Sevigny. I can’t wait! The 1790s-ish costumes (by Eimer Ni Mhaoldomhnaigh) look mostly good, with a few weird touches that I’m sure we’ll enjoy nitpicking.

Sunset Song – in theaters May 13

“The daughter of a Scottish farmer comes of age in the early 1900s.” Starring Peter Mullan (Miss Julie) and written/directed by Terence Davies (The House of Mirth).

A new adaptation of Alex Haley’s Roots, chronicling the history of an African slave sold to America and his descendants. Starring Laurence Fishburne and … Jonathan Rhys-Meyers.

“A falsely accused nobleman survives years of slavery to take vengeance on his best friend who betrayed him.” Has Hollywood officially run out of ideas?

Meryl Streep as a real-life “New York heiress, who dreamed of becoming an opera singer, despite having a terrible singing voice.” Costumes by Consolata Boyle.

What upcoming historical costume movie or TV show are you looking forward to?