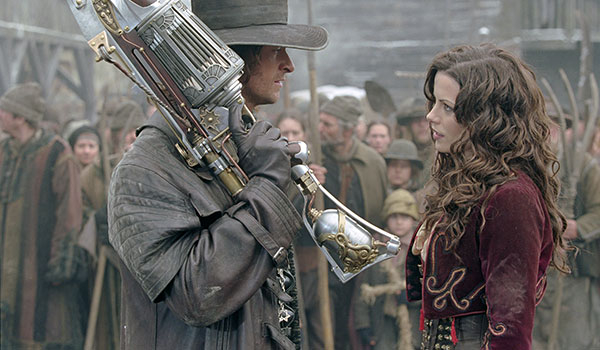 This movie is right up there with Legends of the Fall (1994) in my list of most hated movies ever. Van Helsing (2004) has the added bonus of offending my goth sensibilities by being something of a vampire horror flick. Because, OMFG, is this a stupid movie. Boringly stupid. Annoyingly stupid. Stupid with a side of pathetic so-called costumes. Now, I love all the cheesy Hammer Horror flicks of the 1960s-70s, I love the classics from the 1930s, I love sooooo many of the ridiculous vampire movies of the ’80s and ’90s, but this Van Helsing is just crap made to irritate me. Let’s count out some of the ways…

The flick starts with Dr. Frankenstein creating his monster, then Count Dracula shows up to steal said monster. Next, Van Helsing kills Mr. Hyde (aka Dr. Jekyll), who he finds in the attic-y part of Notre Dame Cathedral (shades of the Hunchback of same, even though the Jekyll and Hyde story takes place in London, not Paris, but whatever). Then we learn that Van Helsing is working as part of some Catholic secret society, and while that’s not relevant to old horror movies, it smacks of throwing a little Da Vinci Code / random conspiracy theory in for kicks. And the movie rounds things out with Dracula’s three brides and several werewolves, all of which (including Dracula) have a mishmash of “rules” for their existence and how to kill them. It’s a hot mess.

2. The Setting Is Supposedly Historical 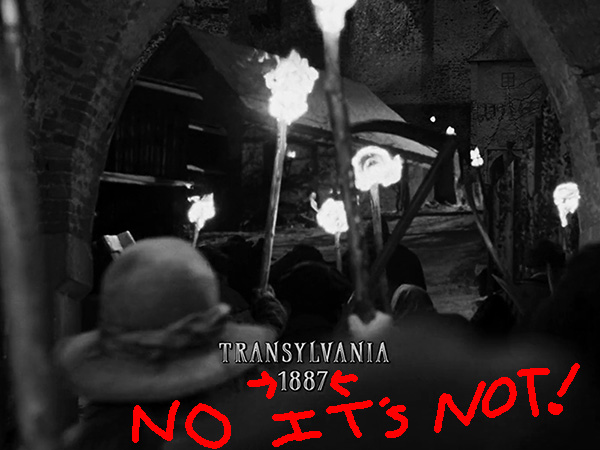 Just don’t. I’ve already written a whole Snark Week post about how this annoys me in frock flicks. But here it’s particularly grievous because zero attempt was made to look or feel historical, other than slapping that title card on the flick. Why do that?!? Just leave it off and have your way with the silly horror fantasy crap? 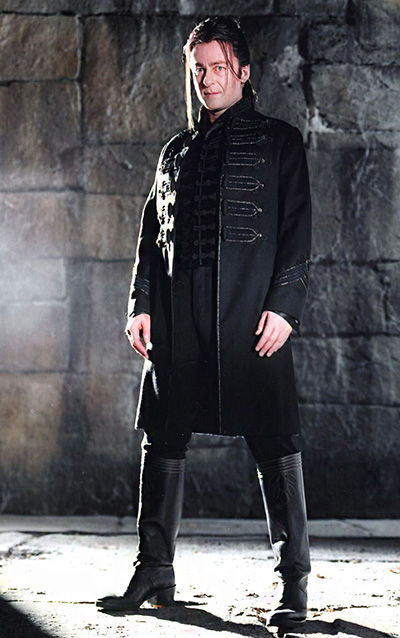 It’s so stringy! And the ponytail looks like some greasy old guy trying to be “hip” — but worse because of the weird barrette. Either rock the long hair like the poncy guys in Interview With the Vampire, or cut it short like some Twilight kid. Just don’t half-ass it here.

The barrette is dorky AF.

4. There’s So Much Goddamn Leather 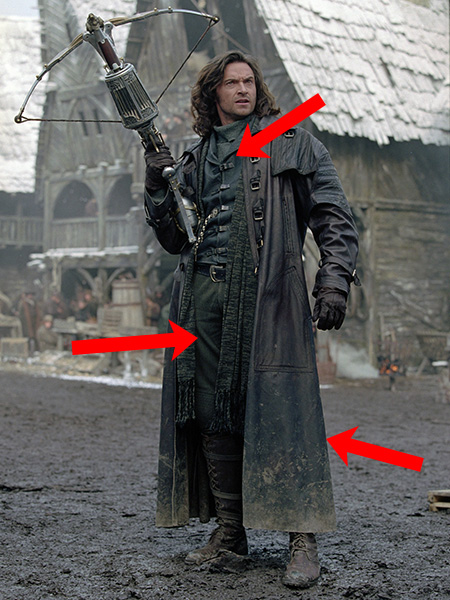 It starts with the Contractually Obligated Leather Pants, but oh no, this movie doesn’t end there. Both Van Helsing and Anna are are fans of the leather look. Not in any vaguely 1880s fashion, of course, that would be silly. 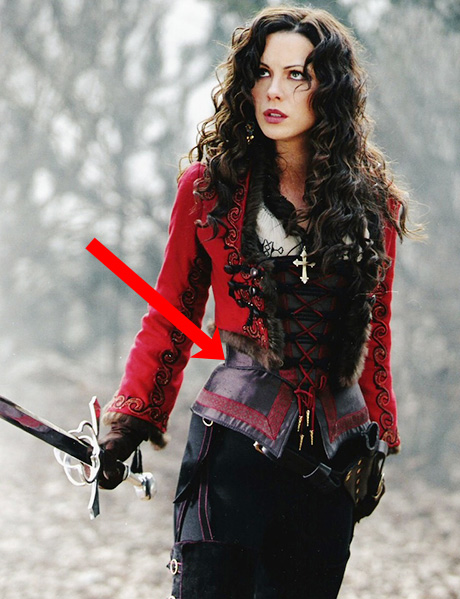 And a different type of leather corset here! Have I mentioned that corsets were not worn as outerwear before the 1980s? Oh, I guess that doesn’t matter when you’re wearing thigh-high leather boots & have a spiral perm, all to fight the evil undead in the 1880s. 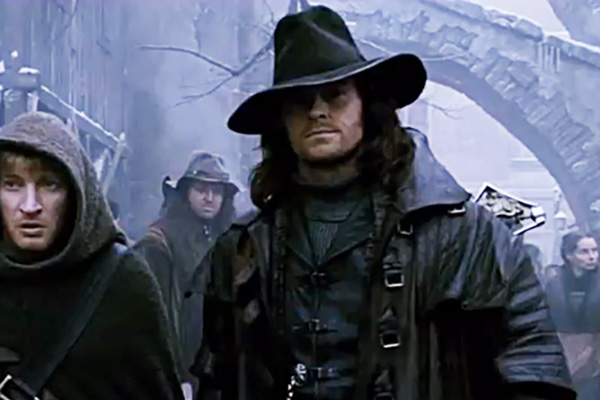 Where have I seen this hat before? 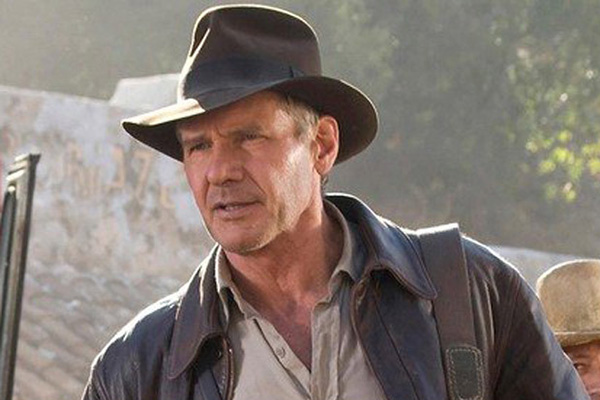 In fact, Van Helsing wears several different throughout the movie, and his hat wardrobe is well documented by whoever gives a fuck. They all generally resemble Indy hats for the same effect. Booooring!

When his hat is off, we get to see his ridiculously feathered, shiny, and soft hair. 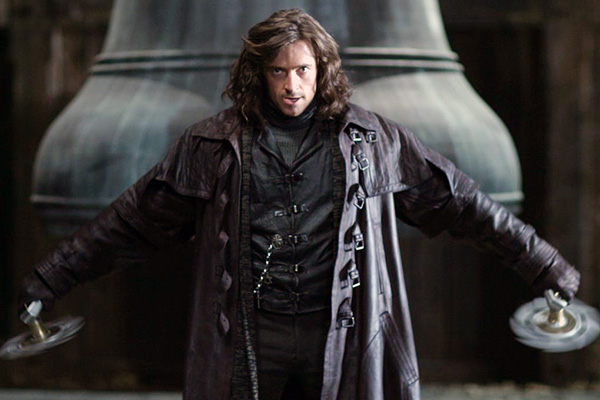 Why is the vampire hunter’s hair prettier than the vampire who’s had hundreds of years to figure that shit out? 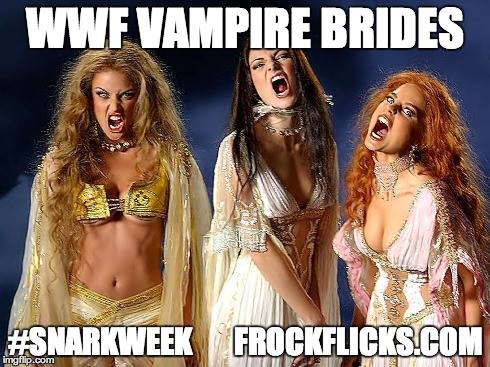 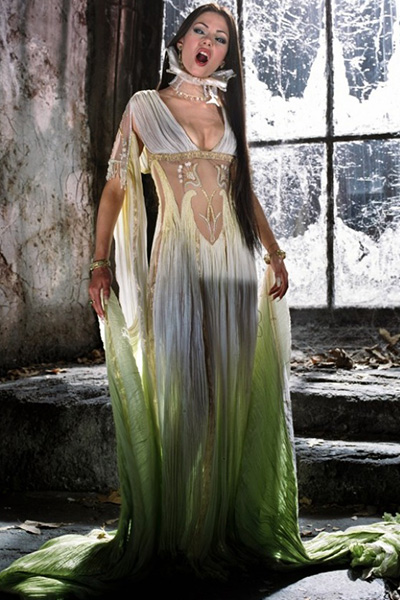 Sure, I guess this is a dress. 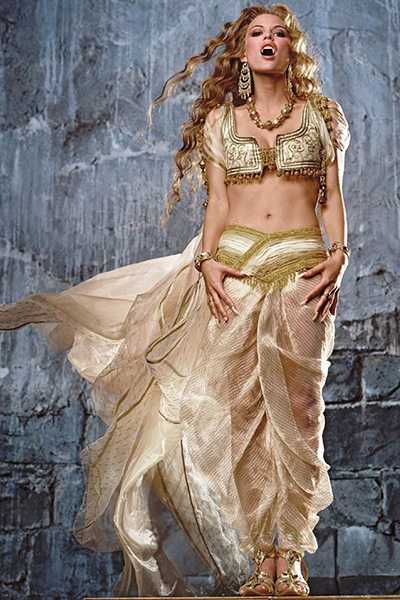 But this is just a hacked-apart belly dance outfit. 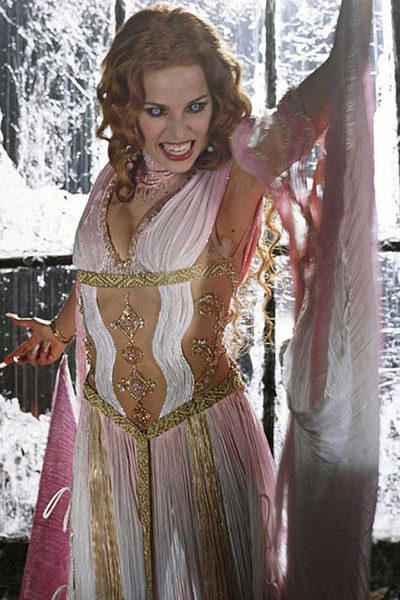 7. Anna Valerious Has Too Perfect Curls 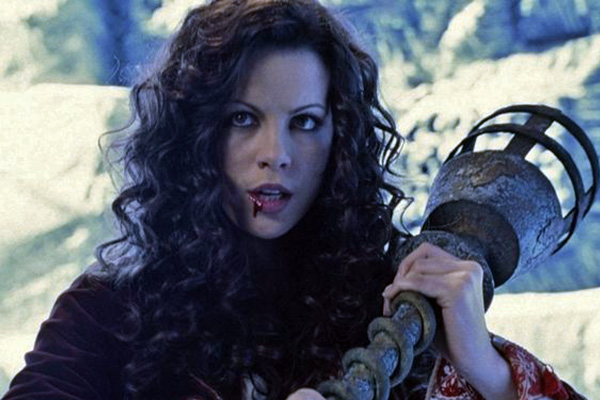 Even when fighting, which she does endlessly, Anna’s hair is perfectly in place. We’re way beyond beachy waves here, we’re into full-on spiral perm territory. Without a hairpin to be found, because this is a fantasy movie with a thin sheen of a historical setting. Her hair is just so ridiculously perfect. 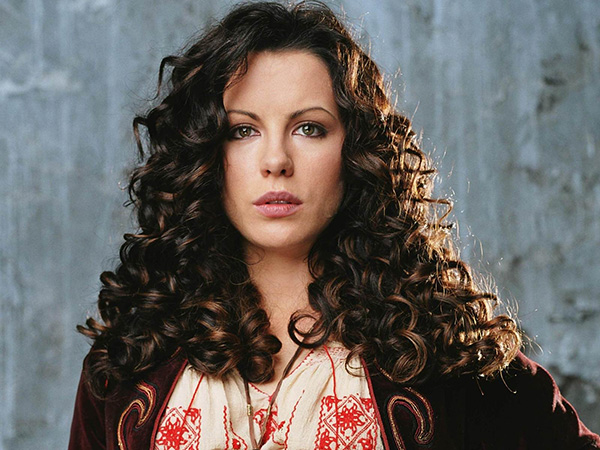 8. I Guess Steampunk Was Still Cool 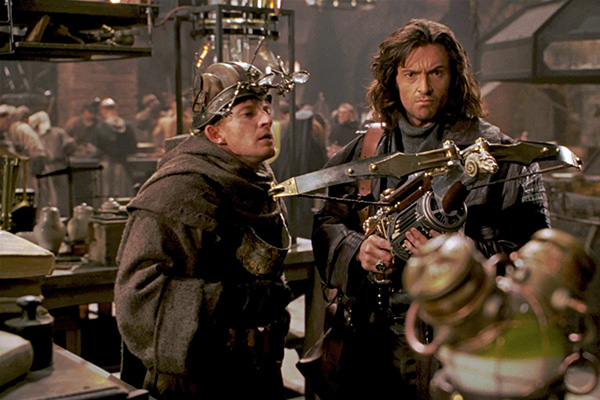 First, there’s Dr. Frankenstein’s lab, which is far more junked up with shiny bits than in the old Universal movie. Then Count Dracula recreates said lab for his own randomly nefarious purposes. But the big steampunk mess is the lab of Carl the Friar, who’s part of the Catholic secret society that employs Van Helsing. This guy is supposed to be like Q for James Bond, giving Van Helsing loads of “technology” to fight evil with. But really, this is just an excuse to show a lot of gears and tesla coils.

9. The Way the Vampires’ Mouths Open Is Ugly

Someone was way too excited to use CGI here, and I hate it. (Yes, I’m allowed to nitpick!)

10. No, Anna’s Red Dress Doesn’t Make Up for Anything 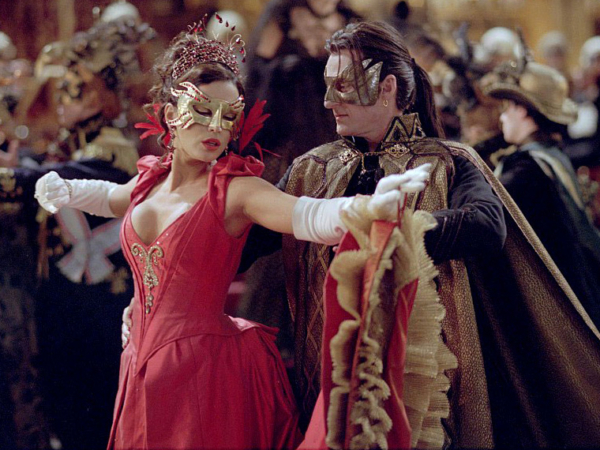 I know all y’all have been waiting to say “but Anna wears that great red dress in Van Helsing! Isn’t that worthwhile?” And I’m here to say NOPE. Most of the time she’s wearing some kind of Sexy Bull Fighter Halloween costume, so, sure, this dress is definitely better. But I’m not giving it a total pass! The masquerade scene is beautifully costumed by the excellent design team of Gabriella Pescucci and Carlo Poggioli. I particularly like the opera singer’s outfit in black and gold. But they’re all fantasy masquerade costumes. Anna’s red dress has some approximate historical lines, but from about five years later than the supposed 1888 date of the film. So yeah, a nice fantasy masquerade dress, that’s all. This is fine but pretty *sad trombone* after everything else in the movie.

If you want to suffer through this movie one more time, I recommend this Van Helsing drinking game I found. It’ll dull the pain.

Are you irritated by Van Helsing? Join in the hate!