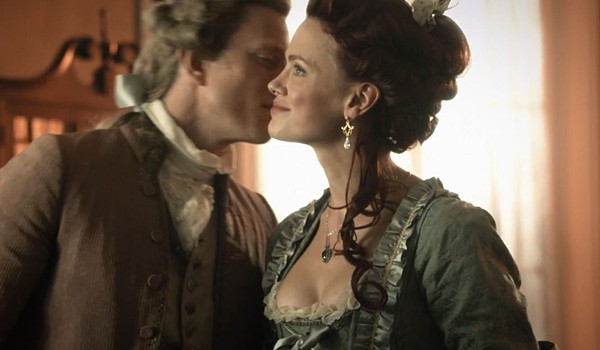 The TV show Sleepy Hollow tells the story of the 18th-century Ichabod Crane who has mysteriously turned up in the current day and has teamed up with a policewoman to stop the apocalypse, including the Headless Horseman. My husband is into it, mostly because he likes horror … And every time there’s a flashback to the 18th century, he calls me in to look at the costumes and snickers at my responses.

The costumes were designed by Kristin M. Burke, a talented designer with a background in horror who also writes the FrockTalk movie costume site.

Now, I think the show is pretty successful as genre horror/supernatural/crimefighters. It helps that the lead actor, Tom Mison (who played Bingley in Lost in Austen) is very cute. It’s definitely not trying to be Masterpiece Theatre, so we probably shouldn’t judge it on its historical accuracy … but it’s Snark Week, so let’s have some fun mocking Katrina’s costumes!

Katrina (previously Van Tassel, now Crane) is Ichabod’s wife. She’s in purgatory, but gets to come out occasionally to liven up the story (it’s complicated, and I haven’t watch more than the first few episodes, so go with me here). Also, there are flashbacks to Revolutionary War America that explain Ichabod’s and Katrina’s past. So, we definitely get some “18th century” to analyze … or as the husband would say, “Come and look at this!! snigger”

Katrina was both a Quaker and a witch … not in the 18th-century sense of the term, but as in she’s part of a coven called the Sisterhood of the Radiant Heart. Yeah, that kind of witch. If you’d like to know more about her, check the Sleepy Hollow Wiki.

Katrina hangs out in purgatory a lot:

Katrina’s black “purgatory” gown is from the pilot [which a different designer handled]. It’s a look that leans heavily toward “fantasy” as opposed to the period, but she is, after all, a witch! Her backstory costumes have been very diverse: Quaker, nurse, noblewoman, widow… We go with the scripts and try to make it all happen! Katia is a real sport and she wears the period silhouette so well; she’s built for it! We are always excited when we get a new opportunity to do something new with her. –Kristin M. Burke, Clothes on Film 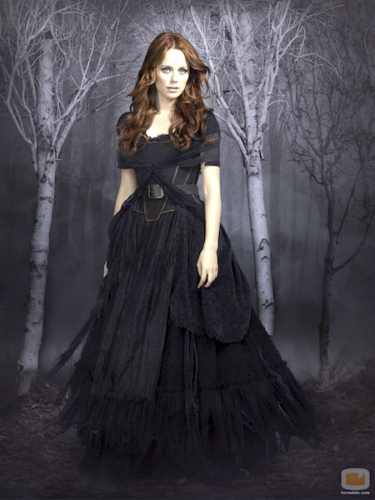 Purgatory = 18th century Steampunk, apparently! What would that be, Candlepunk?

Again, Katrina used to be a Quaker and was a nurse in the Revolutionary War:

Q: So when you see Katrina is supposed to be in a ball gown, your mind goes, “Oh the ball gown I could make, except, oh, the ballgown I can’t make.”

Kristin M. Burke: Absolutely. The ballgown we can’t make, because budget restrictions say we can’t make it. But Katrina the Quaker gown? That was nowhere to be found. Something THAT plain. Nowhere. Like, all of the eighteenth-century stuff is beautiful prints or, you know, each one has a little something to it. There was very little that was that simple in her size. And so for us, on a practical level, it was like, you know what, let’s cut bait, let’s just do it. We’re getting to two weeks, once that two weeks point has been hit, we’re screwed and we have to invent something. Making a ladies ensemble for this period takes at minimum two weeks. So, once we get within that two week period, we can’t solve the problem by making something. And so there, we were coming up on that two weeks where we couldn’t find anything and I thought, “Okay, well, let’s make something.” — Go Fug Yourself 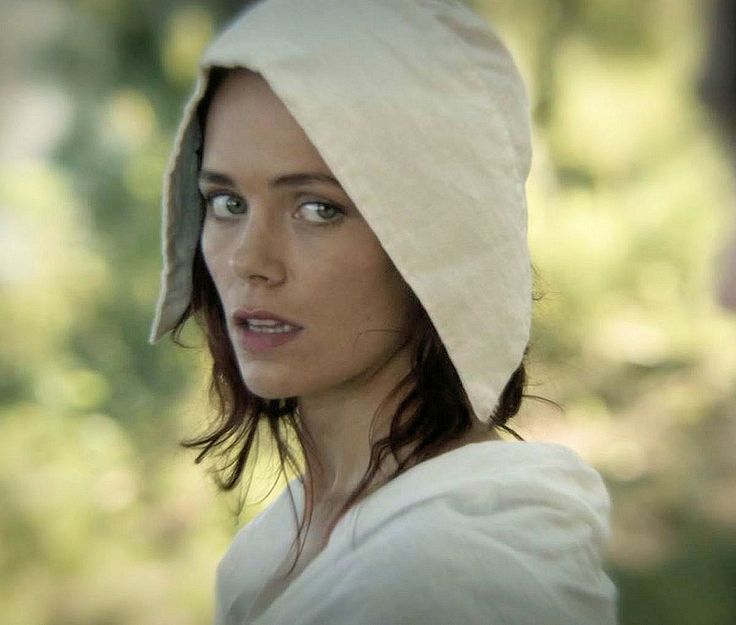 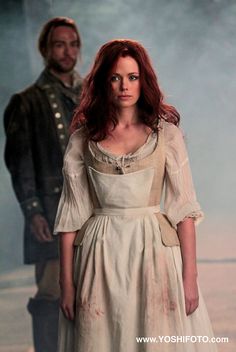 I would mock her red hair, but I guess Quakers probably weren’t too into powdering their hair. I can mock the hair down, though! Also, as someone who dyes her hair a similar color, I’ll tell you that that shade of red ONLY comes from a bottle.

Of course, it’s the “18th century” costumes that are the most entertaining. Again, the show isn’t trying to be Real History, and I think that’s pretty clear to the audience:

Q: There are a lot of military flashbacks during the show featuring Bluecoats (colonists) and Redcoats (dastardly British). Have the re-enactment police been onto you about anything yet?

Kristin M. Burke: Surprisingly, we haven’t felt that. Although since this is a fantasy show, and not Horatio Hornblower, we are probably attracting a different, more forgiving type of audience. We do not have a technical adviser for these flashbacks, so most of the research is done by the individual departments on our show. When things don’t line up, we powwow and try to work it out. We all need to be on the same page in order for it to be acceptable. I can’t tolerate sloppiness in research or execution, so I am usually the one heading up the “technically accurate” brigade. We do what we can, and I have learned a lot on this show. But I do realize that there is so much to know that I will never be able to know it all, and that history is oddly not always factually similar when you compare accounts of the same event. Many interpretations of the same events lead to different conclusions, and history is written by the victors. It’s a bit ‘bendy’, as our writers like to say. — Clothes on Film

But nonetheless, let’s take a look at what Katrina wears in the 18th century: 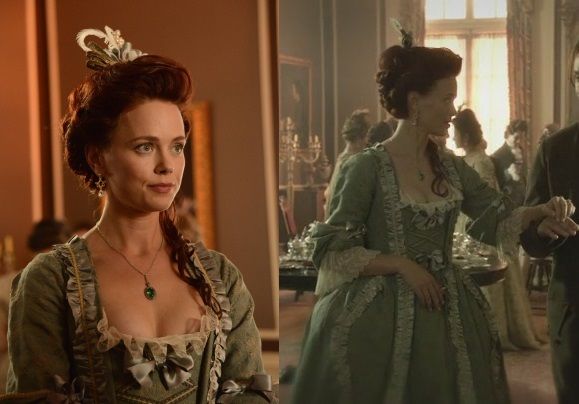 This green dress is actually quite nice! I like the shape, the ruched trims… I can’t really find anything to snark! 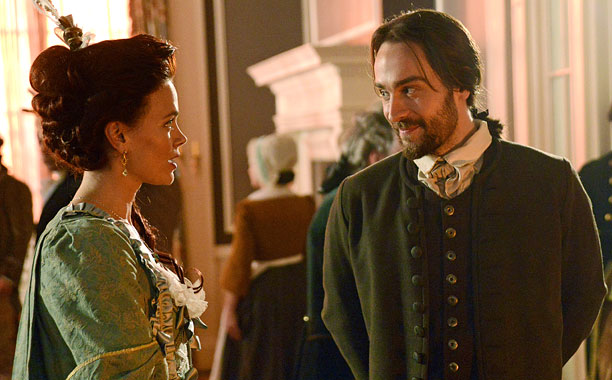 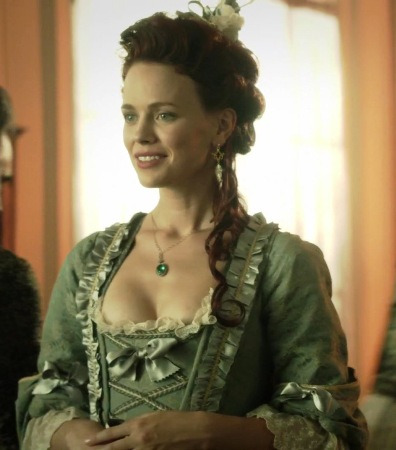 Her hair is very faux, but at least it’s UP. I’ve also seen some memes making fun of her hair, so clearly they have to balance what a modern audience thinks is attractive. 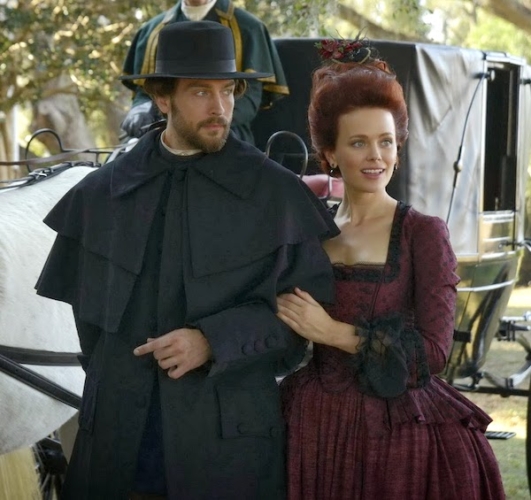 This burgundy ensemble is a little more cheesy to me. Sure, it’s nice and gothy, but all that black lace and undersleeves just seem heavy handed. 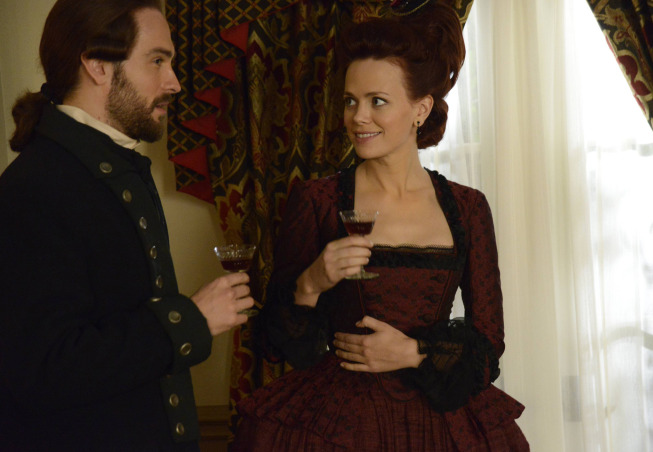 I don’t love the buttons on the side of the stomacher, but that’s a nitpick. 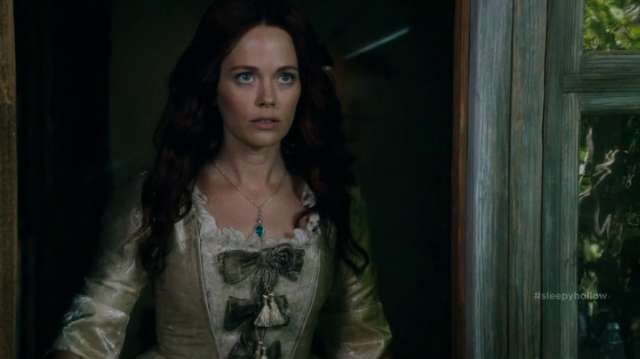 Here is where it all starts to go downhill. Maybe she’s feeling casual and so left off the stays? Is that crushed velvet I spy? Does she need to borrow a rubber band for her hair? I’m sure I have an extra around here… 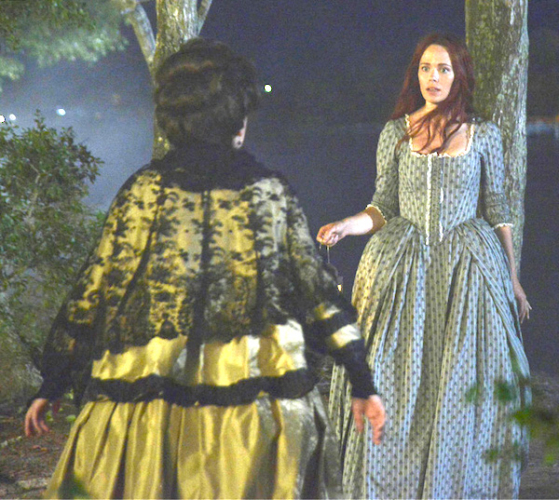 Princess seams (nope), no corset or wrong corset shape (nope), hair down (nope). Her opponent (Mary, in the yellow) has a much better outfit! 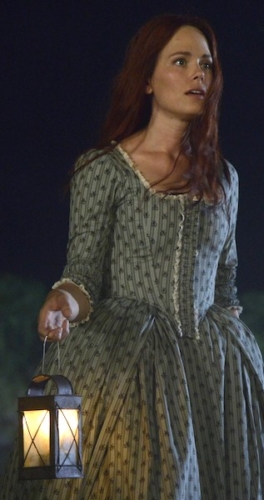 Drink in those princess seams, baby. Let the art wash over you. 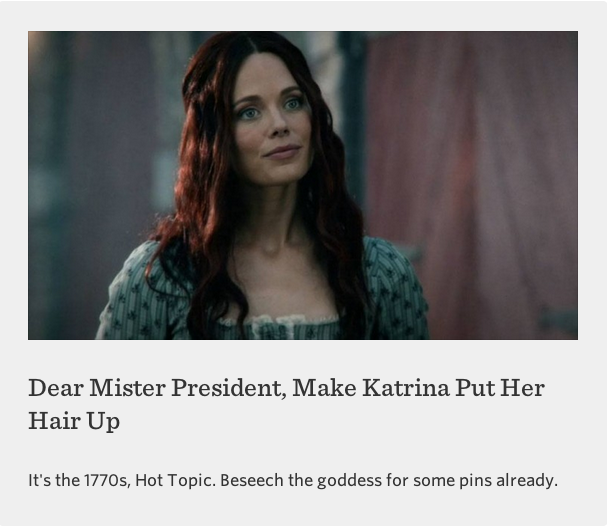 WE ARE NOT ALONE! VICTORY! VICTORY! Post from Previously TV. 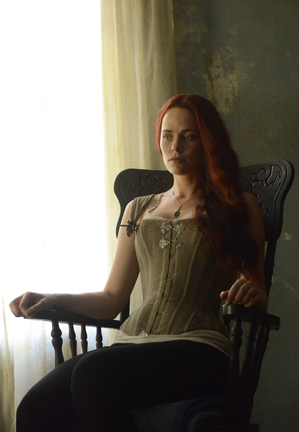 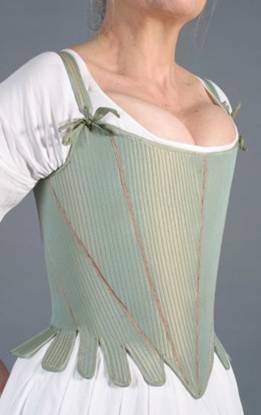 What she should be wearing: a back lacing, straight fronted, tabbed set of 18th-century stays. These beautiful stays were made by The Staymaker.

The Sleepy Hollow corset was made by Puimond, who writes, “The shows costume designer, Kristen Burke, requested the py04 Victorian style corset made with straps cut from 100% cotton coutil and brocade fabric so that they could age dye the hell out of it.” My emphasis on VICTORIAN. They certainly did a nice job distressing the corset, even if it’s COMPLETELY WRONG FOR THIS ERA. Also, those are some WIDE, load-bearing straps.

Finally, I’d like to leave you with this image of Katrina’s 18th century headstone: 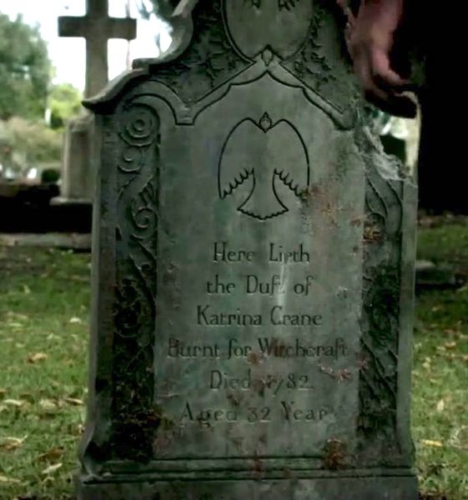 In what 18th-century world would someone burned for witchcraft have that on their headstone, let alone HAVE a headstone at all? Oh right, an era where we have a Sisterhood of the Radiant Heart.