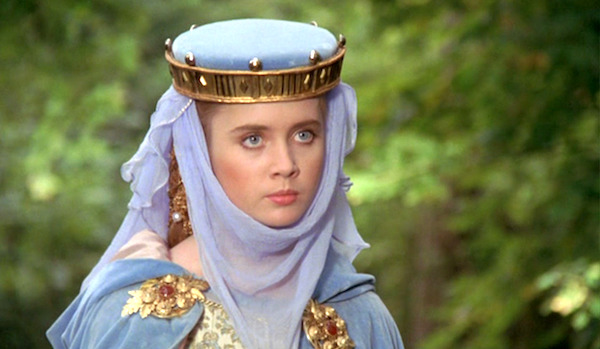 People, I did it. I discovered Ivanhoe (1982) was available for streaming on Amazon, and I watched it. Unfortunately, I think I covered the worst of it in my Top 10 Shitty 1980s TV roundup, but if I suffered through this sucker, you have to as well! I’ve said it before and I’ll say it again: Frock Flicks is a family!

I’ve never read the original Sir Walter Scott novel (published in 1819), nor have I seen any of the cinematic adaptations before, so I have to say the plot — particularly the resolution — surprised me. Okay, so 1819 wasn’t a particularly stellar year for anti-racism/anti-ethnocentrism, yes. But there was SO MUCH to raise one’s eyebrows at just in the general storyline, which is, in this adaptation (let’s see if I can be succinct, which I doubt): Wilfred of Ivanhoe (Anthony Andrews) is the son of a Saxon nobleman, and said father is pissed his son went to fight in the Crusades. He turns back up in England at a tournament in which Prince John is serving as regent while Richard the Lionheart is imprisoned on the continent (so 1192-93). He previously wanted to marry Lady Rowena, a Norman, but when he’s injured in the tourney, and is cared for by Jewish man Isaac of York and his daughter Rebecca (Olivia Hussey), he and Rebecca start to have A Thing. Meanwhile, Brian de Bois-Guilbert (Sam Neill) is a supporter of Prince John and pissed at Ivanhoe for beating him in the tournament. He takes Ivanhoe, Isaac, and Rebecca prisoner, and he too gets the hots for Rebecca. Robin Hood gets involved in their rescue, but then Rebecca is accused of witchcraft and Ivanhoe has to save her AND choose between her and Rowena. I think this would make way more sense reading it in a novel, because DAMN that’s a lot of twists and turns!

Okay, so to pass on what I learned to you, here’s the educational takeaways from this version of Ivanhoe:

It Was Super Easy to Heat a Giant Tub of Water

Hot tubs, y’all. They weren’t just invented in the 1970s or whenever! There’s a wacky scene where Evil Brian and his mate pull John Rhys-Davis into a steaming hot tub of water. This isn’t the Islamic world, they didn’t have plumbing, and can you IMAGINE how many hours it would take to fill this sucker, all the while the water is cooling off? Technology, people. 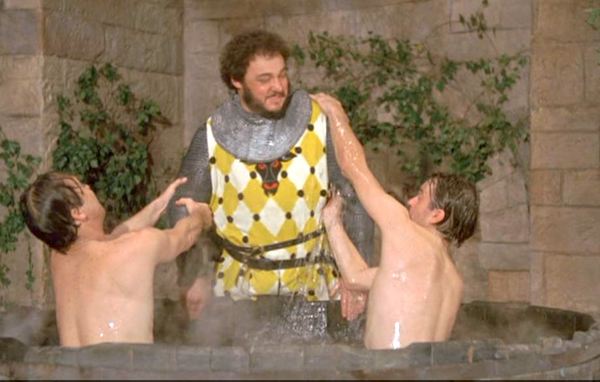 Sam Neill does take his shirt off, tho, in case that does it for you.

Sam Neill as Evil Brian. I generally like Sam, so was surprised to see him as the baddie! He’s fine in the role, but HIS HAIR. WAS NOT GOOD. They tried to center part it and slick it back, but his hair resisted, and it did NOT do anything for his looks. 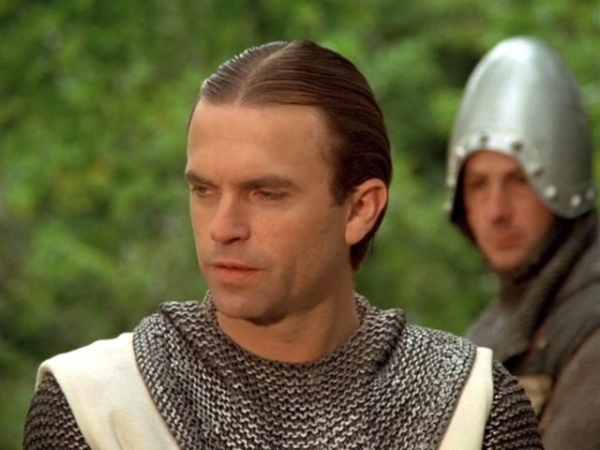 That is hair that is determined to side part. 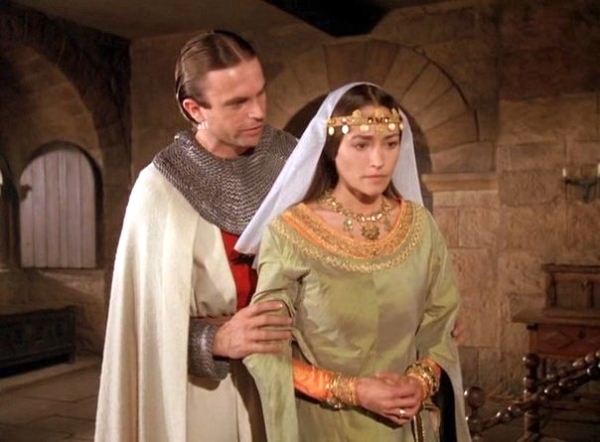 I feel like they worked far too hard at this. 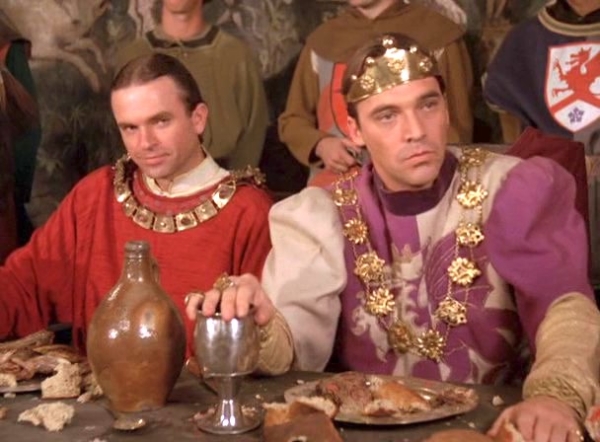 Sure, sit next to the guy in the poncy purple outfit and try to smize at us. It doesn’t distract us from YOUR TRAGIC HAIR.

Medieval Textiles Were Not What I Thought They Were

Okay, so it was 1982, and I’m sure that costume designer Olga Lehmann (The Man in the Iron Mask, The Four Feathers, A Tale of Two Cities, Witness for the Prosecution, The Master of Ballantrae) was given a limited budget and the directive to “make it pretty!” There was no desire to reproduce the Magical Bog Dress of Wherever here. But nonetheless, get ready for ALL the mylar, because apparently medieval textiles were all about the sparkle! 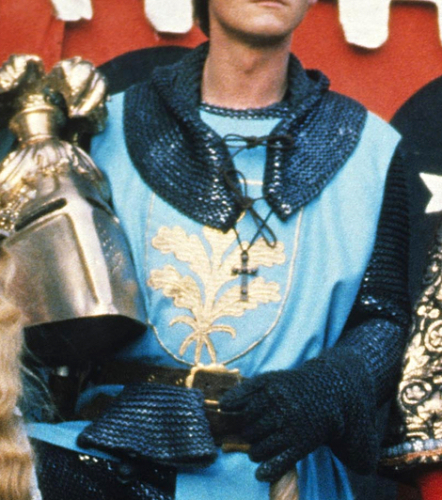 You’ve got your knitted and painted sparkly “chain mail.” 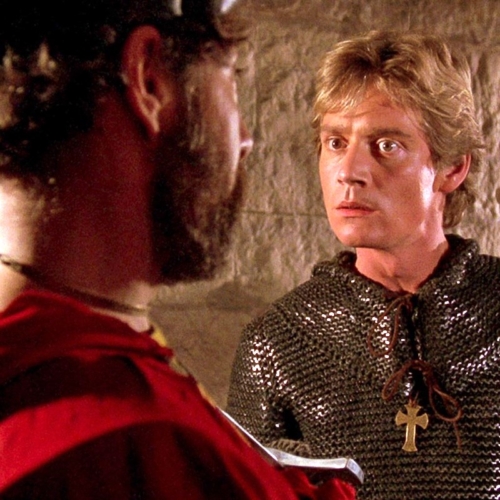 Would I lie to you? 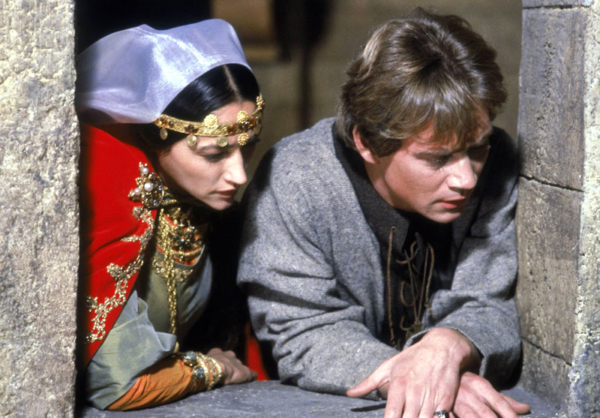 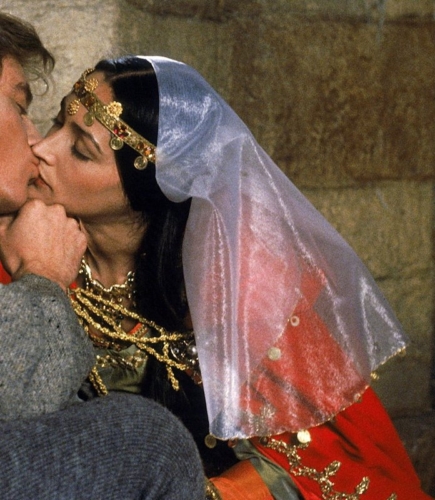 Look at that 100% synthetic shimmer! 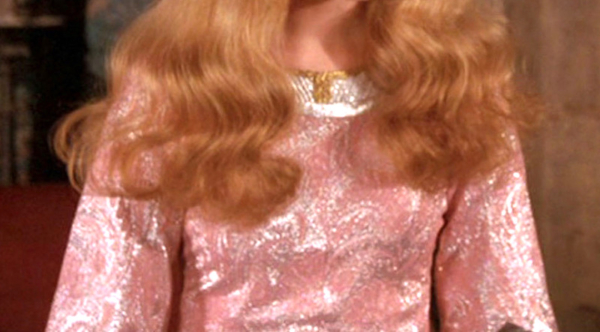 And ALL the mylar/powder-puff-pink brocade you can shake a stick at! 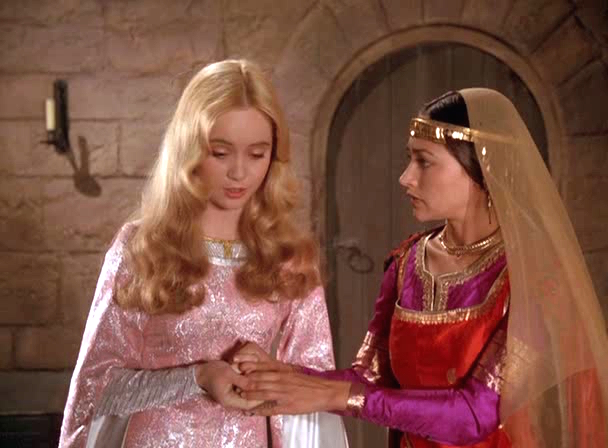 Layer it over your best silver tinsel stretch poly!

“In general Jews in European countries did not wear any clothing that was distinctive or different from that worn by their Christian neighbors, though perhaps they dressed somewhat more lavishly, particularly the women” (Medieval Jewish Civilization: An Encyclopedia).

Hey, even period imagery must be wrong! Because see these medieval Jewish women? You only THINK they are dressed in standard Western fashions: 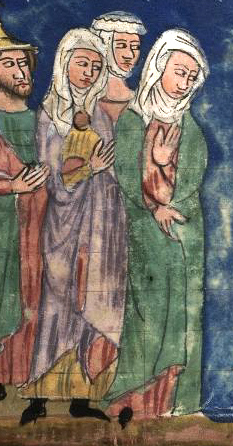 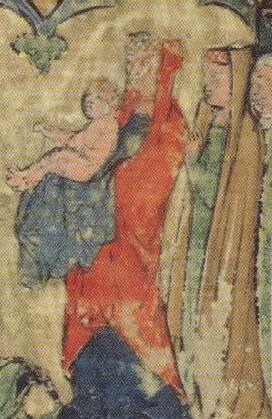 “Isaac’s Circumcision” from fol. 81b of the Regensburg Pentateuch, Germany, ca. 1300, Israel Museum 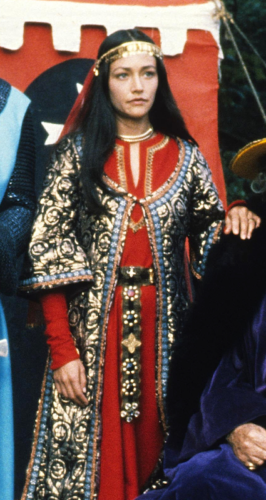 This sparkly brocade overrobe looks very much like an Islamic caftan, particularly in its neckline-only closure. 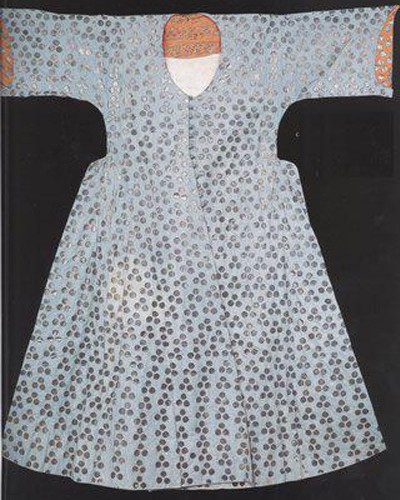 Compare it to: 16th-c. women’s inner kaftan from the Topkapi Palace Museum. 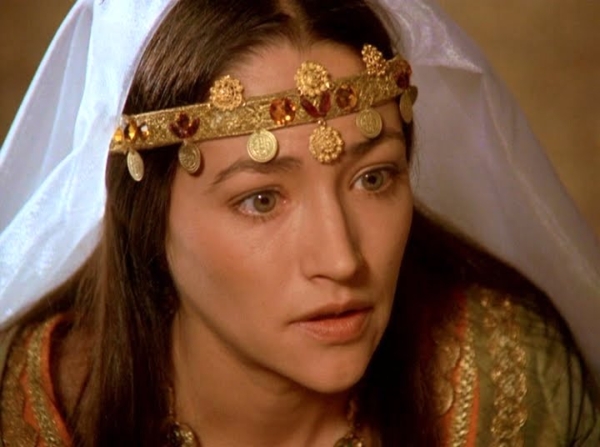 Ah yes, we’ve got the circlet with belly dance coins! 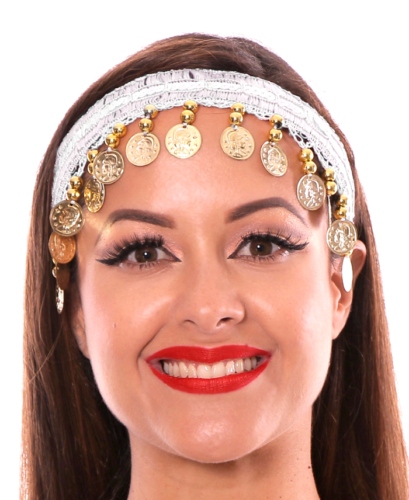 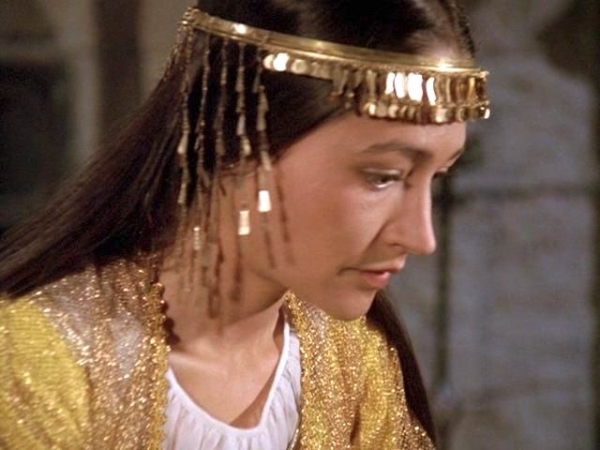 ooo, another circlet but this one more Berber. 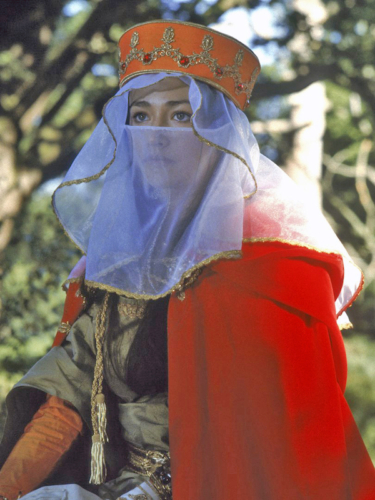 Ah yes, the sheer nylon organza face veil, completely defeating the purpose of such a garment. 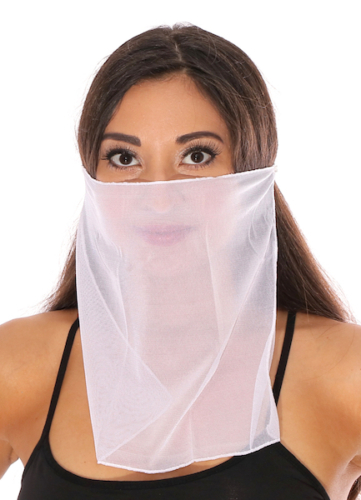 ooo, this is suggested for both belly dance AND “harem costume.” So culturally appropriate! Again only $6.99 at Bellydance.com 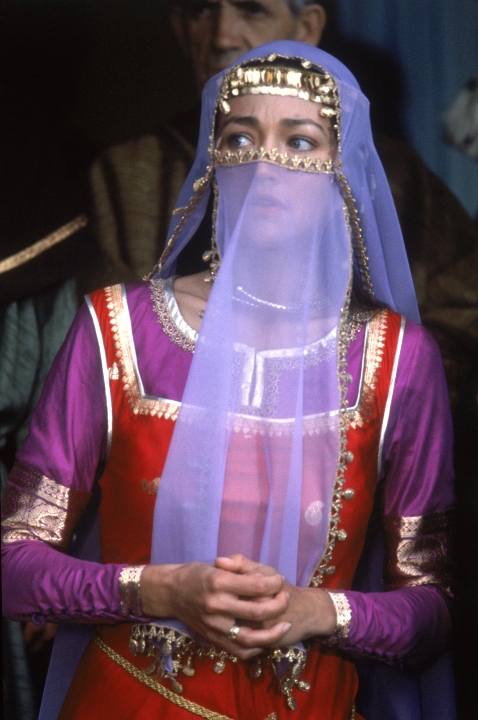 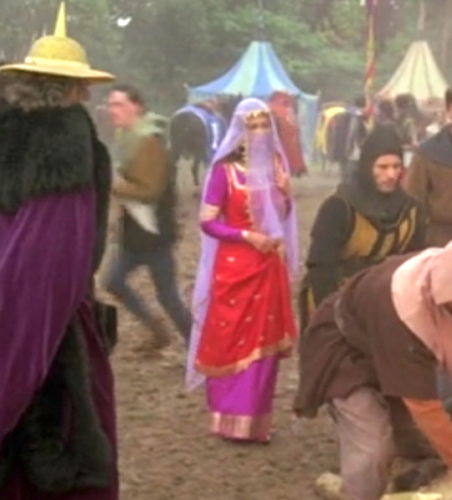 Not blending in AT ALL.

There Was a “Jewish Hat”

Okay, this one is real! I wondered why Isaac was wearing a distinctly different, pointy yellow hat throughout the film. 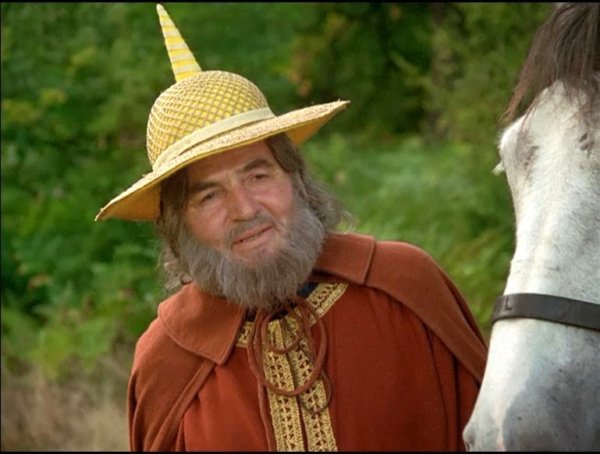 Isaac of York, a Jewish man and father to Rebecca

I did some research and discovered:

“The one exception to this [not wearing distinctively ‘Jewish’ clothing], peculiarly, was the so-called Jewish hat… Jewish custom… was that males should cover their heads especially at synagogue services and often… while studying. At some period it became customary to wear a cap or hat at all times, at least outdoors… Lacking iconographic or other evidence for an earlier period, all that we can say with certainty is that by the mid-thirteenth century Jews were wearing hats, often simply a soft cap with a peak, but also what appears… to be a hat of stiff material with a distinctive point on the top… [This hat] may have been the result of special legislation, certainly in Germany and probably in England and France, requiring Jewish men to wear such hats” (Medieval Jewish Civilization: An Encyclopedia). 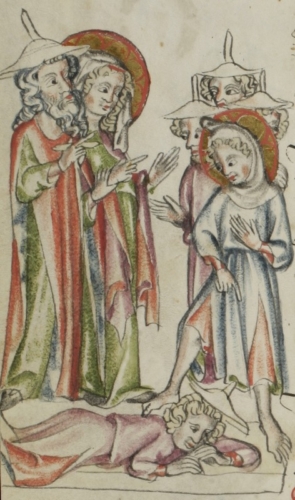 It’s my understanding that as this hat may have been a requirement by Christian authorities, it’s not a very happy thing for modern Jewish people, so please don’t run out and recreate your own without serious thought. But hey, I actually learned something educational!

And a Bonus: Apparently This Airs on TV Every New Year’s Day in Sweden

To everyone’s, including Sam Neill’s, amuseument: 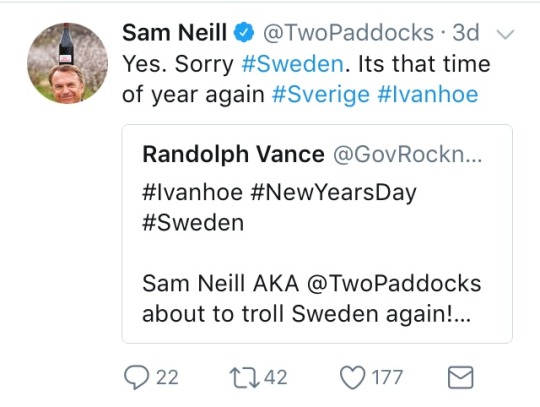 Have you learned anything educational from bad frock flicks lately?