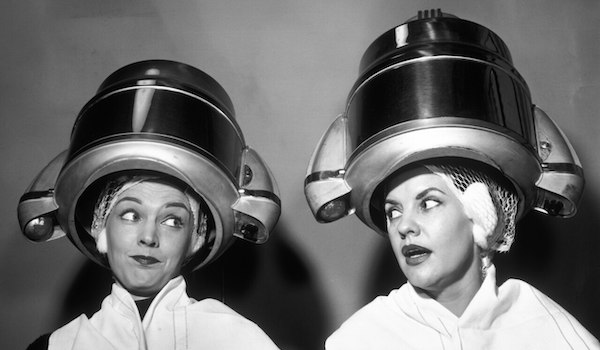 We here at Frock Flicks have run afoul of numerous people, both inside and outside the film industry, with our snarky commentary on historical costume movies and TV series. We’ve gotten into many aspects of why we do what we do previously, but here’s one that came up for me when I was responding to A Certain Costume Designer who didn’t like me pointing out inaccuracies in a comic and/or flippant tone: this is how your audience talks. We’re just putting it out there more publicly than you may have previously come across.

Go back through the history of cinema and television, and let me tell you, whether or not the filmmakers or the fans realized it, there was at least ONE person out there scoffing at the history, the costumes, the set, the bullet bra, the horse’s bridle, the kind of candles being used, the idea of this queen being in love with that king, the suggestion that this person said that. At least one person leaned over to another during a 1939 screening of Gone With the Wind and said, “Yeah, I kind of doubt the slaves were quite that happy.” Meanwhile, in a theater in 1952, someone was watching Singin’ in the Rain and thinking, “You know, I lived through the 1920s and the clothes didn’t look like that.” And at least one person finished watching Anne of the Thousand Days (1969) and muttered, “But Catherine of Aragon was a redhead!” 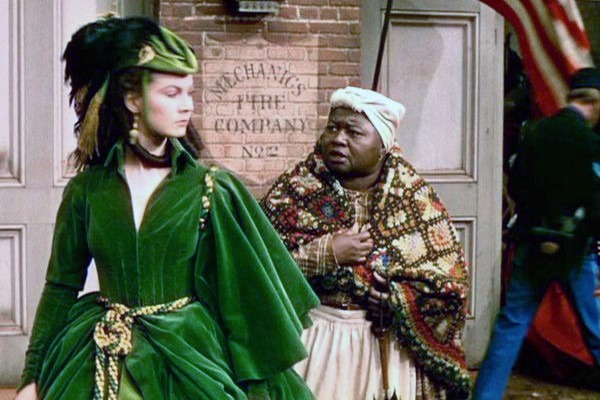 Maaaaaybe Gone With the Wind (1939) isn’t the most accurate representation of slavery ever? And maybe someone has noticed? 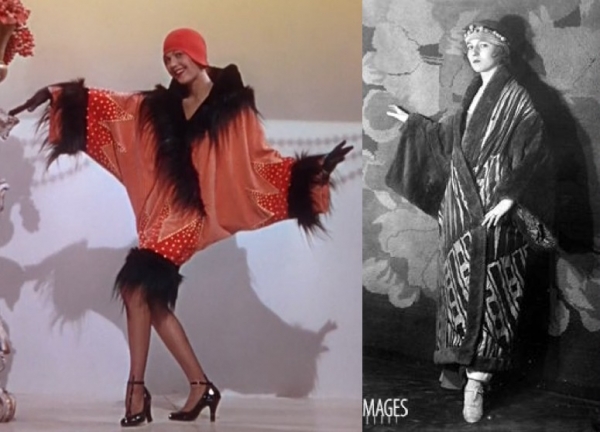 Does this Paul Poiret-inspired ensemble from Singin’ in the Rain (1952, left) reference real Poiret 1920s designs (right)? Sure! Are they the exact same aesthetic? Nope. Given Singin‘ was released 22 years after the period in question, I think it may have come up. 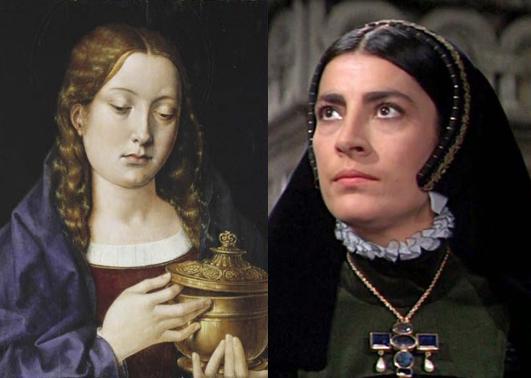 These hair colors are not the same. Michael Sittow, Catherine of Aragon as Madonna, late 15th century | Irene Papas in Anne of the Thousand Days (1969)

First of all, there is a long legacy of historians reviewing films and television shows. Allow me to quote from a 1926 letter written by a historian at the University College of the South-West of England, Exeter, and published in History, an academic history journal:

“It seems evident … that the production of films on historical subjects for schools is not practical … owing to the great expense of time and money involved … But it appears to me that teachers of history might very good work by visiting the Cinema shows in their area, and by pointing out to their pupils in what respects the productions are good or bad from an historical point of view. I do not see why this criticism should be given in a spirit hostile to the cinema habit, or in a manner uninteresting to the pupils, in whom it might encourage a critical attitude of mind and by this means the cinema habit might be converted into a useful means of instruction” (Harte, Walter J. “History and the Cinema.” History, NEW SERIES, 11, no. 41 (1926): 45. Accessed January 24, 2021. http://www.jstor.org/stable/24399638.).

Maybe Walter wasn’t imagining the concept of Snark Week or of poking fun at “errors” or misguided anachronisms. But it’s not just the academics. Check out this rant by MacKinlay Kantor, a journalist, screenwriter, and novelist who was particularly interested in the Civil War, published in the New York Times in 1940. No it’s not about the costumes, but it’s the kind of thing we’d point out:

“For the life of me, I don’t know why these Hollywood people make even the pretense of historical accuracy in their pictures … I recall one particularly painful episode in ‘Operator 13,’ released in 1934. Marion Davies rolled her eyes and exclaimed to a companion in a gray uniform, ‘Mah goodness, those Stahs and Bahs suttenly look lovely up on that flag-pole!’ The camera obligingly panned up and disclosed to us, not the Stars and Bars, but the Confederate battleflag — the famous St. Andrew’s Cross — snapping in all its glory” (May 26, 1940). 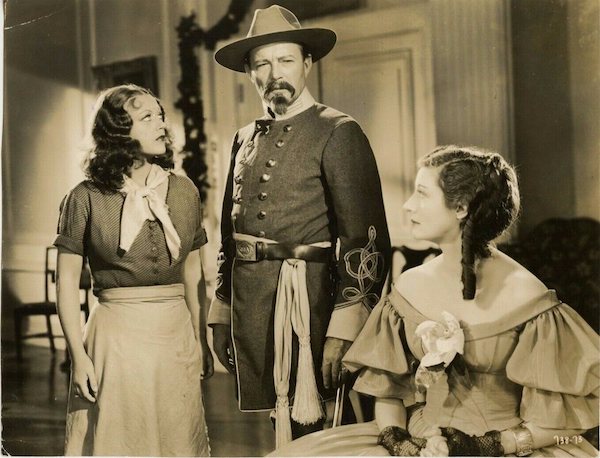 Also, what the fuck does Marion Davies’s (left) costume have to do with the mid-1860s?

Move forward in time, and any of us old timers who were on the H-costume mailing list (an email discussion list for people interested in historic costume; yes, that and usenet is how we used to interact!) will remember the VITRIOL and HORROR that Elizabeth (1998) engendered. So that was nerds nerding out with other nerds, and probably no costume designers or armchair “period drama” aficionados were reading. But trust me, we were snarking away. I’m such a librarian that I literally just went through the mailing list archives and found these comments about the film written in 1998:

“Mary of Guise seems to be a floozy who never brushes her hair and likes riding about in armour.” 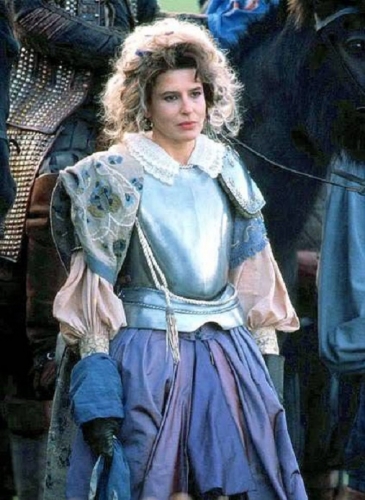 “The costuming on the other hand had me laughing out loud. Pretty much all of the ladies gowns laced up the back [MY PEOPLE] (including the ones with stading [sic] collars)?!” 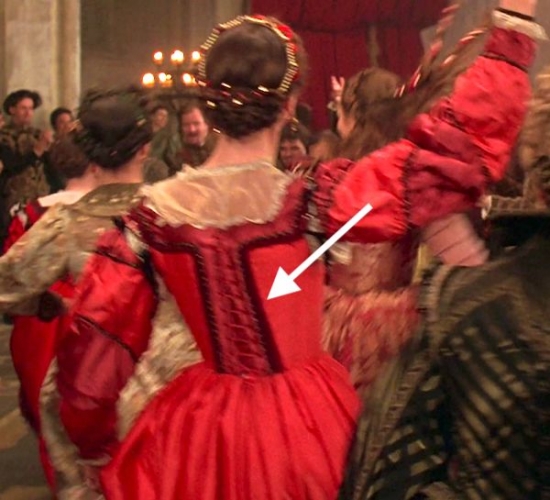 “The ring that Walsingham wears (brilliant character though I thought, he was the most fun to watch) is straight from Bali, not history.” 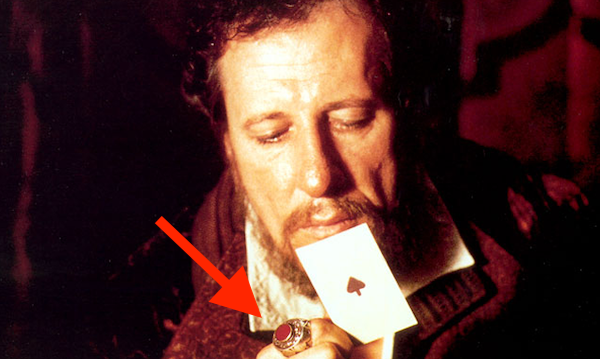 Is this the ring in question? It does resemble ones you can easily find today… 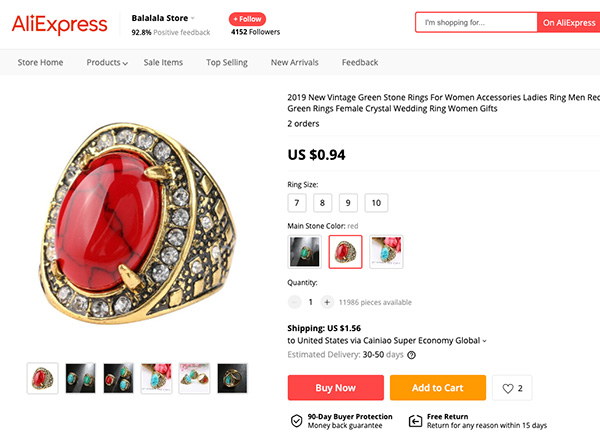 “I will still despair over the Spanish Ambassador who looked like Prince.” 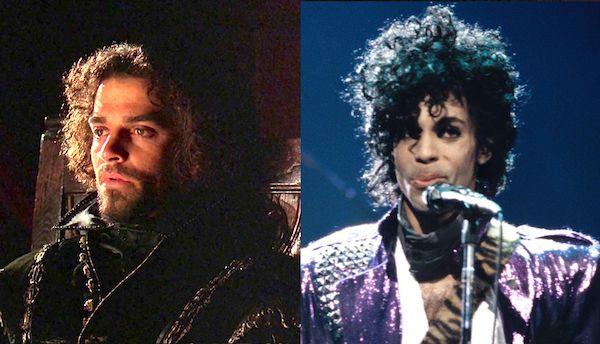 So sure, we often attempt to include comedy in our reviews. But honestly, that comedy is NOT complicated. All we’re generally doing is saying “one of these things is not like the other.” Those who care may find that funny. Those who don’t will say “so what?” It’s not rocket science, and if it bothers you that we’ve pointed out that thing X isn’t like thing Y, then, maybe make thing X like thing Y next time? Or don’t! Whatever! You keep doing your thing, and we’ll do ours.

One of these things is not like the other…