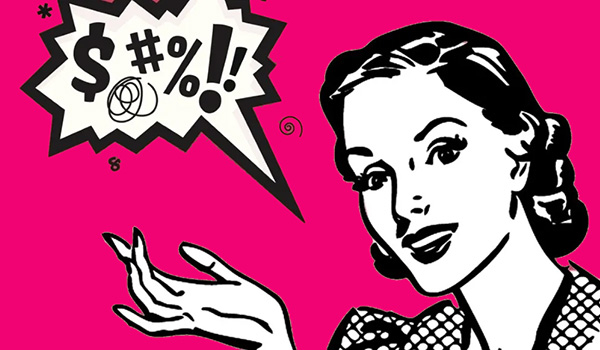 Every so often, we’ve heard folks complain about swearing and obscene gestures like the middle finger, either here in our blog or in frock flicks themselves. Since bitchy is always on brand for us, we’re gonna break down why we’re OK with cursing a blue streak in our own writing and in historical costume movies and TV shows, and why you should just deal with it too.

The word “fuck” with a meaning of crude copulation has turned up multiple times in casual writing from the 16th century. Earlier still was the nickname “Roger Fuckebythenavele” in a court case dated 1311 — indicating this guy was clueless about how to do the deed. There’s also a cheeky poem from 1475 about monks fucking the town’s wives. It wasn’t the go-to, go-with-everything word we know and love today, but “fuck” was certainly used in speech and writing as a slang term for having sex.

The word was so common that “fuck” was outlawed in print by the Obscene Publications Act of England in 1857 and by the Comstock Act of 1873 in the U.S. “Fuck” was frequently used among men in both World War I and II, and some credit the usage among American GIs in WWII from “privates all the way up to the top brass” for popularizing usage back home and ever since.

But humans have always had swear words of some kind, and the fashion for specific ones has gone in and out, just like dress fashions. “Bloody” rose up as shocking and offending in the 18th century only to become worth a mild titter in the early 20th. “Bugger,” “shit,” and “cocksucker” were equally words of contempt in the 19th century.

While data is limited, scientists who study these things haven’t found that we’re swearing more or that society is getting worse because of it. People are just doing what we’ve always done.

2. If you think it’s brand-new on film, that’s because of the Hays Code

Movies and even TV productions produced now, in the 21st century, do feel more free to include normal, everyday swearing in their shows, historical or otherwise. If seems feels different, yeah, it is! Because we used to have a hell of a lot more censorship in Hollywood, et. al.

The biggie was the Motion Picture Production Code that ruled from 1934 to 1968. Called the Hays Code, after Will H. Hays, then president of the Motion Picture Producers and Distributors of America, this agreement among major studios restricted what was considered “decent” onscreen. Disallowed was any profanity, even “hell” or “damn,” along with sex, drugs, homosexuality, interracial romance, and much more. While the Code was finally abandoned in the late 1960s, theatrical releases still have to deal with the motion picture rating system.

On American TV, usually it’s been the broadcast networks and the Federal Communications Commission (FCC) that tightly control what can be said or shown. In 1972, George Carlin famously joked there were seven words you can’t say on TV: “shit,” “piss,” “fuck,” “cunt,” “cocksucker,” “motherfucker,” and “tits.” But the FCC obscenity guidelines don’t apply to non-broadcast media such as cable TV or streaming networks, so on HBO, Netflix, Amazon, etc., it’s swear city! Plus, these channels can show uncensored versions of theatrical releases, so yay, more swears (and maybe more actual fucking, who knows)!

Our blog, our rules. As we’ve said many times before, we dislike policing our own words or images because someone else says so. If you think we have inappropriate content on this site, that’s your problem, not ours. We’re foul-mouthed bitches, and frankly, we’re a lot cleaner on this blog than we are IRL. We have endless FAQs that explain what the fuck we’re up to here. If you don’t like this, there’s plenty of other shit online.

When it comes to swearing and such in frock flicks themselves, all we might care about is if the swearing makes sense for the story. We’ve already established that swearing is historically accurate, so let’s take a look at some recent flicks that folks have gotten pissy about … The Great (2020-) is an “occasionally true” version of Catherine the Great‘s life, thus it’s already taking the piss out of any idea of a Serious Historical Drama. Characters like Peter constantly talking about fucking (and actually fucking) is true to who he is within the context of the show. Ditto the more straightforward historical drama of Becoming Elizabeth (2022), where the creepy cad Thomas Seymour drops F-bombs left and right. It suits him.

But swearing doesn’t have to mean a character is an asshole. It can be a sign of outsider status in a stratified society. Some of the queer female baseball players in A League of Their Own (2022-) swear in their private conversations, and that feels natural and conspiratorial, showing how close they are with each other. This use of language is yet another thing the straight, conservative 1940s world around them wouldn’t understand about these women.

This delightful promo image for Corsage (2022) works in the same way. This is showing how the character of Empress Elisabeth of Austria felt like an outsider even though she was at the pinnacle of insider status as a wealthy, beautiful, royal woman. It’s using the contrast to show how her inner feelings contrast with external perception of her. 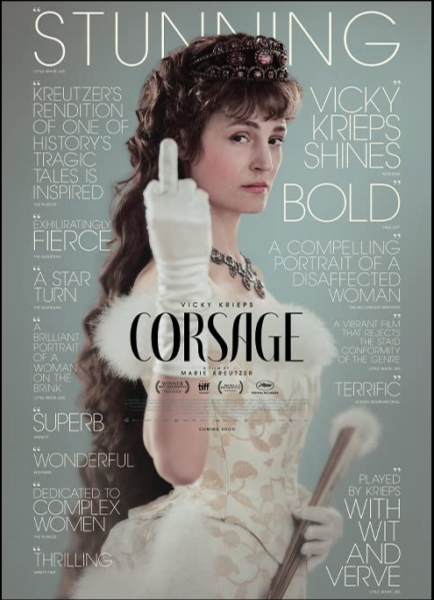 Swearing and crude gestures have always been part of culture. Frock flicks are finally able to reflect that. We say, fuck yeah!

C’mon, admit it, you swear at the TV when a frock flick turns out shitty! What’s your favorite curse?