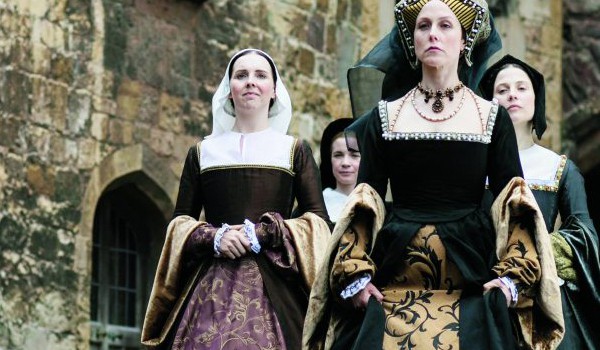 One of the charming and delightful things about watching frock flicks is being transported back to Days of Yore when ladies wore sweeping skirts and walked along sweeping verandas with handsome beaus … and part of all the ‘sweeping’ means long dresses hanging down, touching the ground. That’s where a long hem should be, at the ground whilst the wearer walks.

But for some reason, that’s a really difficult concept for a lot of modern actresses to grock, and movie/TV directors don’t seem to have any problem with this. Hell, costume designers or set dressers aren’t pitching a fit either when they see actresses bunch up skirts just to walk across perfectly flat ground, despite all the wrinkles and wear and tear it must be causing on those otherwise beautiful gowns.

That’s why Frock Flicks is here to give some learnings to all them out there in HollywoodLand and at the BBC, ITV, and anywhere else historical costume movies and TV shows are being made. STOP IT WITH THE SKIRT HIKING. It looks like shit, it’s bad for the costumes, and it’s not historically accurate. Actual photo of actual women in the 1890s doing minimal not-really skirt hiking to walk up steps. Note how all they’re doing is holding their long skirts neatly to one side, out of the way of their feet. No need to bunch big handfuls of fabric up around their waists. THIS IS HOW YOU DO IT.

Women who grew up wearing long skirts wouldn’t constantly need to grab handfuls of skirt and lift it out of the way of their feet in order to walk easily. I’ll admit it helps if skirts are hemmed to the right length with the shoes you’re wearing, but that’s the only slack I’ll cut for costume rentals and lack of fittings due to tight production timelines. The answer is not to hoist skirts up around your waist like you’re about to sprint out the door or leap over a fence.

Skirt-hiking is only really needed if the wearer is actually running, going up stairs, or walking on uneven ground, or if the wearer is a little bit infirm or insecure, such as an elderly lady. So have pity on the taffeta and velvets being endlessly crunched up in all those fists, and just stop! This lady in Knightfall (2017) is leaving jail and, what, jumping over a puddle?

Oh wait, it gets worse. The skirt-hiking in Knightfall (2017) is so stupid, Kendra made a gif for us to mock. These chicks in The Whore (2010) are walking through filth, but c’mon, their clothes are already falling off their shoulders, so why bunch up the skirts? Seems like too little, too late at this point. OK, the ladies-in-waiting in Queens / Reinas (2016) are wearing skirts that are too long. But also, they’re wearing 1860s-style giant hoopskirts in what’s supposed to be a telenovela about Queen Elizabeth I and Mary Queen of Scots. Maybe it’s a nervous tick that leads to all this skirt-hiking in The Princess of Montpensier (2010). Because her skirt is neither too long nor is the ground at all uneven.

Sarah suffered through the shitty costumes of Juana Inés (2016) to share this stupid skirt-hiking scene with y’all. To quote Kendra: “What is all this fabric? Where are my yoga pants?” The Libertine (2004) We’ve been to Versailles (2016) — the doors are wide enough, you don’t need to hoist up your skirts, honey. Shitty attempt at a curtsey? Moments before a beaver flash? You decide. Valmont (1989). Oh Verity, is it because you’re short and you were only in one episode this season and nobody bothered to hem the rental costume for you? Poldark (2017). Why is skirt-hiking always the worst with hoop skirts? I’ve worn hoops plenty of times, and FFS, the whole point of them is to keep your skirts up off the ground! There should be zero reason to hike it up if you’re wearing a hoop and walking on flat ground like this in Passione d’Amore (1981). Or here in Buddenbrooks (2008). That street looks pretty damn flat to me. And that skirt is going to be super wrinkly having been bunched up in her hands. The Vampire Diaries (2009) went back in time with the express purpose of skirt-hiking, I guess. YOUR SKIRT IS SHORT ENOUGH, IT’S NOT DRAGGING ON THE GROUND. STOP. Cezanne et Moi (2016). Fine, whatever, Mercy Street (2016), I know you DGAF about these things. But I expected more from The Leopard (1963). How dare you crunch up the master designer Piero Tosi’s work in your petulant little fist. Shame! Oh come on now. This is what I’m talking about with hoopskirts. They totally clear the ground. Unless you have a trained skirt or you’re going up / down stairs, there’s no need to hike ’em. Sissi: The Fateful Years of an Empress (1957) Just standing around, skirt-hiking with my ladies-in-waiting, as you do. SIGH. Sissi: The Fateful Years of an Empress (1957) Let’s close out the show with a wedding gown. Because what’s more romantic than two big unnecessarily wrinkled bunches at your hips? GOOD TIMES. Nicholas Nickleby (2002)