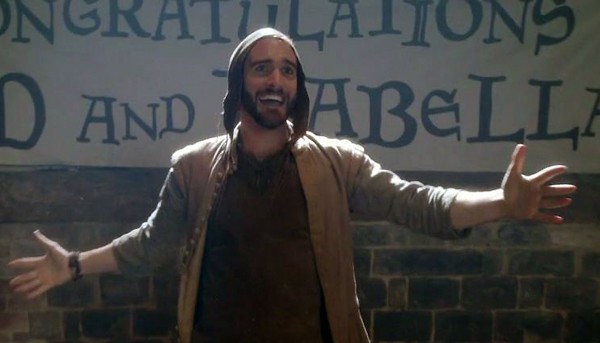 Yes, a biggins (also known as a biggin or coif) is a historically accurate head covering for men and women in the middle ages and the renaissance. But doesn’t mean we can’t say it looks hella dorky. We are judgy bitches, that’s part of our charm. If you’re new, go read our reasons why we think bigginses are always unfortunate, don’t make me regurgitate it for you.

In addition to just looking super dorky, this item of headgear is rampantly abused by costume designers in movies, TV shows, and especially historical documentaries. Yes, it existed in time, it was a thing! But it was mostly worn by men before the 14th century, and even then, it was usually worn under a hat if he was a high-status fellow — you’d see a king wearing a coif under his crown in illustrated manuscripts, but a lute player just wearing a biggins. It’s not a standard women’s headgear in public. By the 15th and 16th century, a biggins is always worn under another hat or as a night cap or worn solo by small children. In the early 17th century, they become relegated to night caps, plus various frou-frou indoor caps and under-caps evolve for women.

TLDR; you don’t see bigginses worn in public without another hat on top of it after the 14th century by most people, and before the 14th century, it’s only lower-status men. 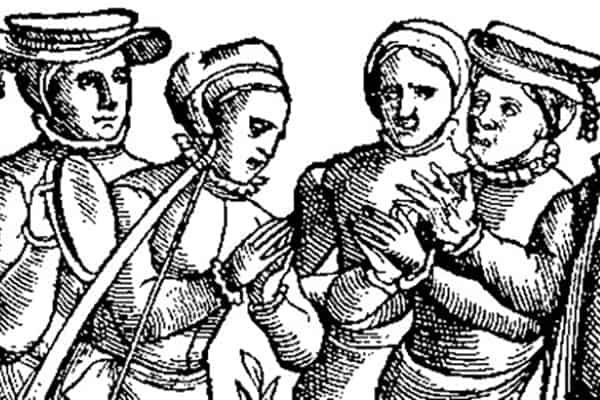 1570 crowd scene “burying William Wiseman after he died in prison.” Two women have hats over their coifs, the other two have elaborate, multilayered coifs with shaped brims. Not a biggins in sight. This is what poor, working people looked like in the renaissance, m’kay?

Besides, last Snark Week, someone suggested we round-up all the unfortunate bigginses in all the frock flicks, so we deliver! Credit to reader Melanie Woltman for suggesting the title to this article <3 <3 <3

AKA, the closest thing you can get to a Fortunate Biggins (though sorry, there are no such things). You wear it with another hat or cap on top. Or you’re under 12 years of age. Or you’re the village idiot. Take your pick! 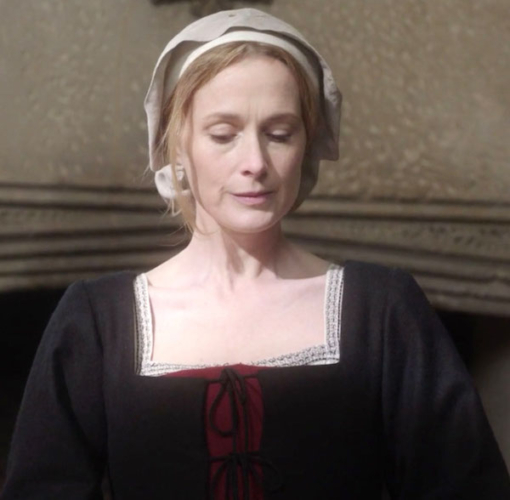 Wolf Hall (2015), UR DOIN IT RITE. Liz Cromwell is wearing a coif with a veil pinned over it (trust us, we looked), and her daughters are wearing coifs. 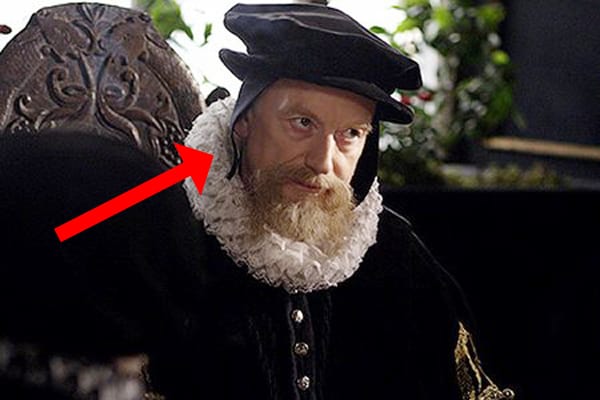 William Cecil, Lord Burghley, spymaster to the queen, in Elizabeth I (2005), is not unfortunate by any means. 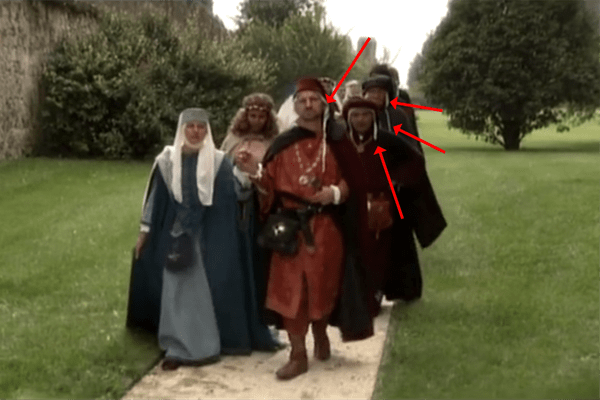 I’m just going to point out how this otherwise incredibly shitty and obviously very low-budget historical documentary, The Middle Ages: Castles Under Siege (2017), has exactly one scene where everyone is wearing hats correctly! Don’t know why they got it right here when they fucked it up everywhere else, so C’MON PPL!

You are not little girls now, so get a real hat. Don’t wear your underwear / PJs in public. Grow the fuck up, ladies! 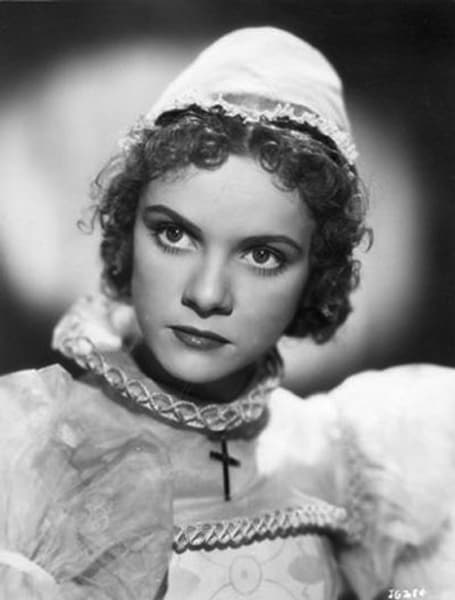 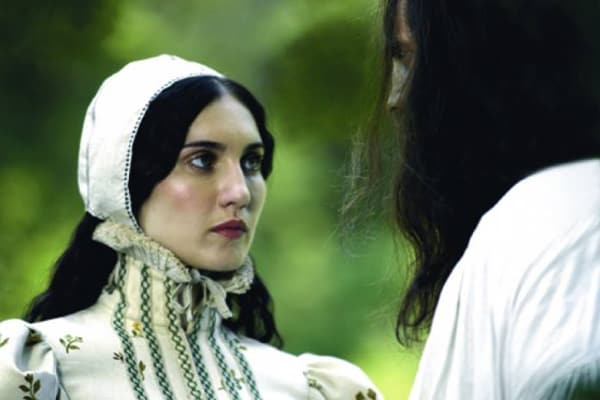 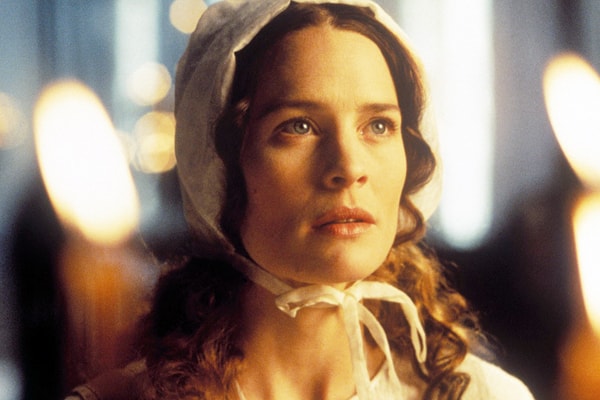 I guess the biggins is supposed to be part of Moll Flanders (1996) redemption arc, but it just looks stupid. 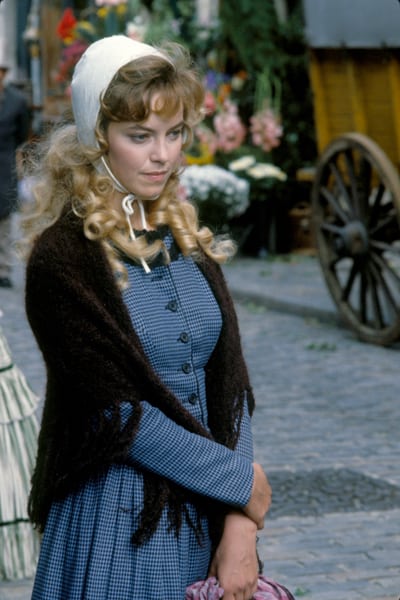 I’m sorry, Greta Scacchi, that cap is doing you no favors. Also, who the fuck wore bigginses in the 19th-c. Paris of Camille (1984)?

Is It a Biggins or a Bonnet?

Trick question! Don’t care, they both look dumb as dirt! 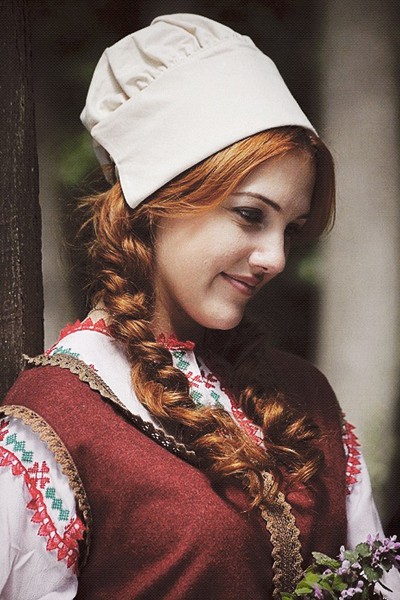 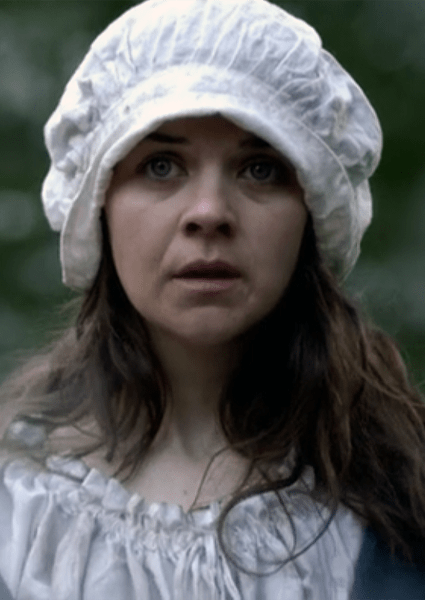 The documentary Witches: A Century of Murder (2015) has quite good historical content about early 17th-century witch hysteria, so don’t let the face-eating bigginses fool you. 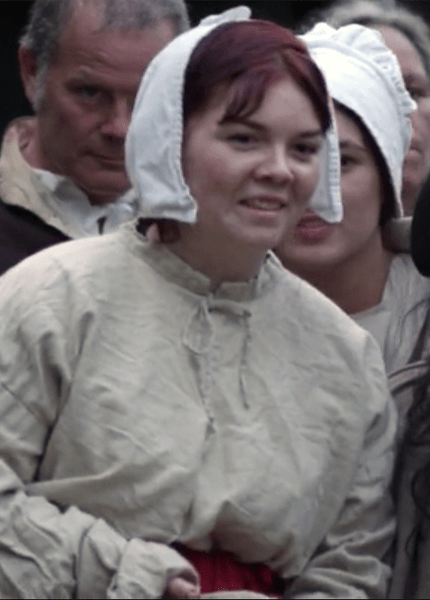 But at some point Witches: A Century of Murder (2015) must have run out of both biggins and bag hats and just slapped a napkin on this woman’s head. 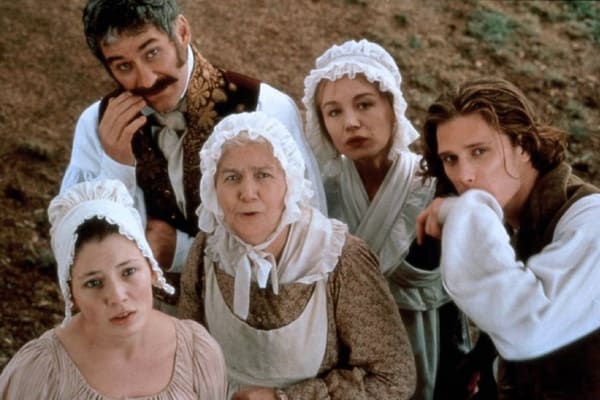 Ruffles just turn the biggins into a baby bonnet, and nobody wants that (unless you are an actual baby, I guess). Princess Caraboo (1994)

C’mon people, is it really that hard? 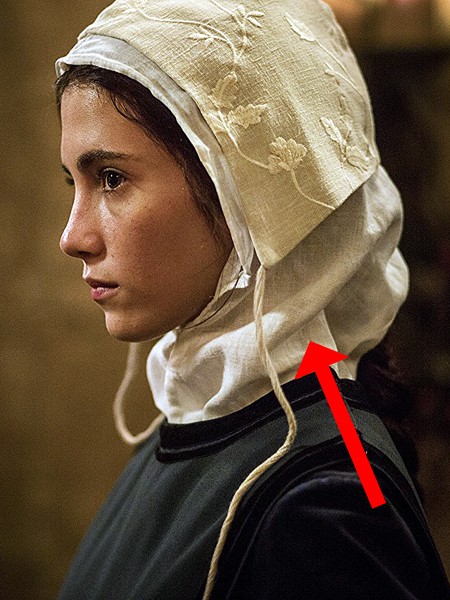 Knightfall (2017) is confused on the concept. She’s wearing a wimple, she doesn’t need a biggins ON TOP of it. *headdesk*

This is the costume designer’s shorthand for “poor people in ye olden times.” I guess we’re supposed to be happy there’s something on their heads, but no, we are not. We demand better! We have standards! 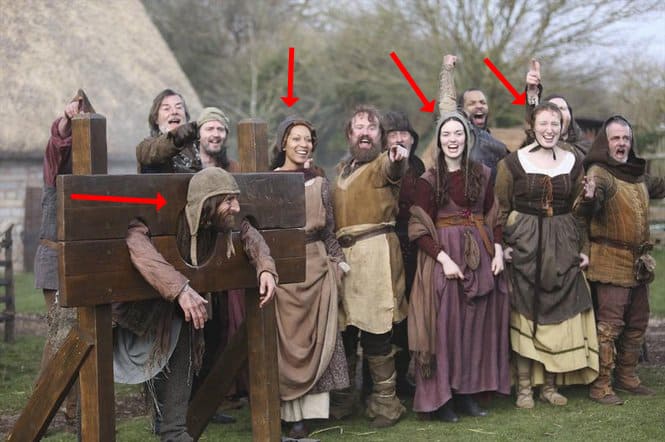 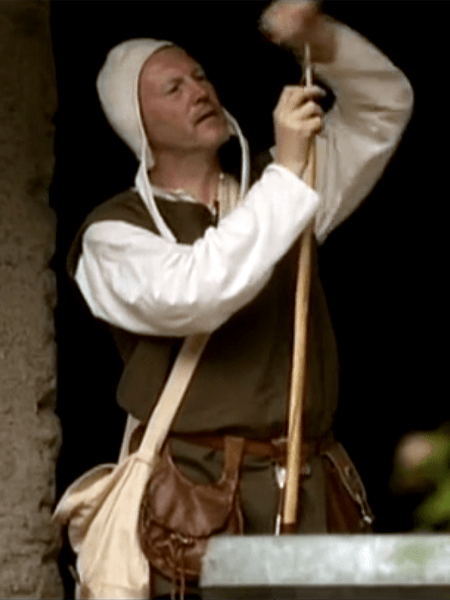 It’s the boy equivalent of butter-churning in ye olden days (back when they wouldn’t let boys churn butter because The Patriarchy hurts boys too!). The Middle Ages: Castles Under Siege (2017) 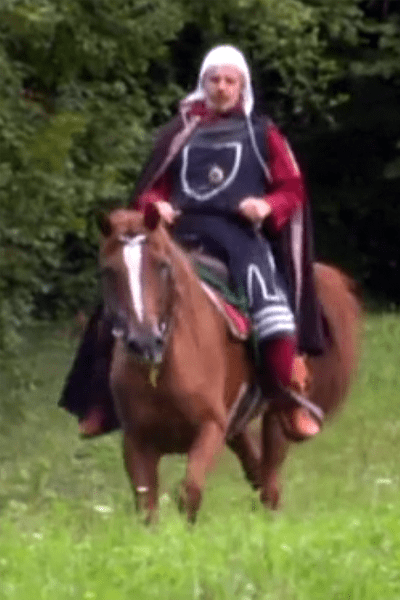 I am Sir Master Lord Duke Biggins of UnfortunateLand from The Middle Ages: Castles Under Siege (2017)! 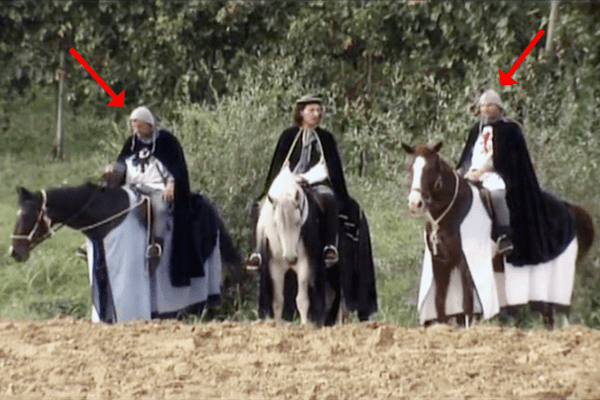 You know who’s really in charge though? The guy with the hat. Only flunkies wear unfortunate biggins. The Middle Ages: Castles Under Siege (2017) 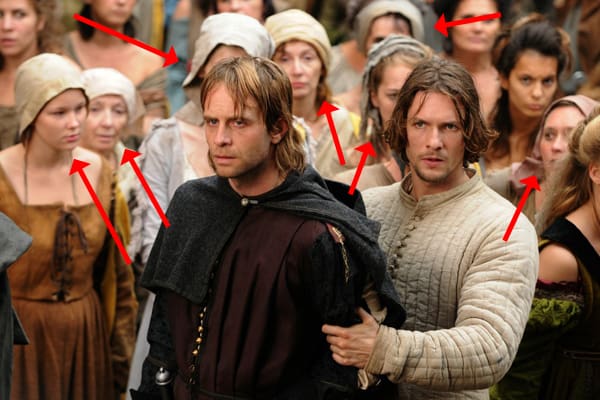 The one dark-haired chick in the back right is giving a total side-eye to her biggins-clad sisters in The Whore (2010). 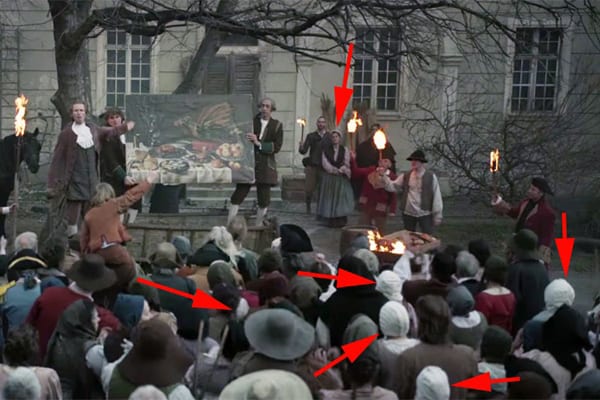 I feel like this IKEA – “Relax” video (2016), ostensibly set in the 18th century, took a lazy way out and used bigginses to denote women in the crowd and hats for women. 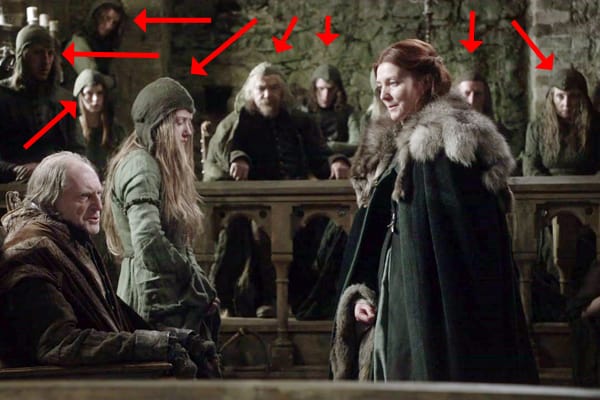 And finally, not historical, but one of your faves — you know ’em, you love ’em, that’s right, Dad makes all the Freymen boys wear unfortunate biggins in Game of Thrones!