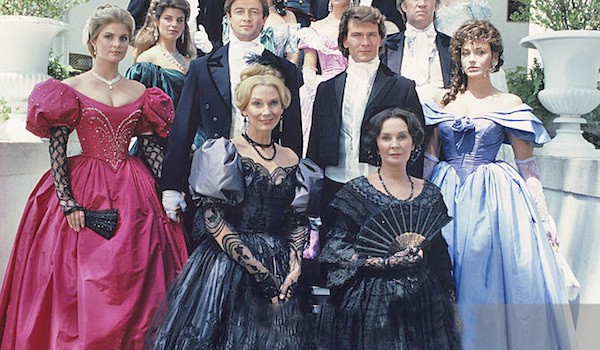 Because I live to entertain, and because I make bad life choices, I have decided to recap 1985’s Civil War classic, North and South. Look for a new episode recap each day of Snark Week, and enjoy the frosted lipstick!

1) I am literally working on these recaps as Snark Week unfolds, so thanks to everyone who has commented here or on Facebook saying they’re enjoying these! Your enjoyment makes my suffering worthwhile.

2) SHIT WENT TO CRAZYTOWN THIS EPISODE! SUDDENLY EVERYONE WANTS TO DRESS LIKE A HOOOR! INAPPROPRIATE SHAGGING IS HAPPENING RIGHT AND LEFT! THE NOT-SO-SUBTLE RACISM IS FLYING FREEEEEE! Strap in, saddle up, and join me!

FYI, this episode spans 1854 through 1856. Not that anyone involved in the costumes seems to care.

We begin with the Northern Clan visiting the Southern Clan, and there’s a ball at Swayze’s plantation, and THE COSTUME DESIGNERS WENT NUTS!!! Best of all is Perfect Blonde, who obviously has been too decently dressed, because someone raided the Dynasty wardrobe. She looks like a mash-up between Princess Di and Krystle Carrington: HOOR RED, acetate taffeta, glue-on rhinestones, Leg Avenue gloves. AND WHAT IS THAT GIANT SILVER THING ON HER HEAD??!!

VIRGILIA is in a slightly more subdued color, but decided to raid the 1980s equivalent of Claire’s for ALL THE RHINESTONES: Poly baroque satin falling off the shoulders, ALL THE MALL JEWELRY, ALL THE HAIR, check out the dumpy extra (red arrow) in back! Ha!

Tits is full Sad Trombone, with sleeves that look like the 1830s went to space and A CRYSTAL HEAD NECKLACE: You see that kind of neckline/sleeves… in the 1830s. It usually doesn’t involve so much shoulder or boob. LOVING the LAVENDER nylon lace gloves. And, HEAD NECKLACE. Lace, teal, don’t see much except her bridal/1870s hair and BANGS. HOW HAVE I NOT RANTED ABOUT THE BANGS YET.

Sweet Blonde went for all my 13 year old southern belle fiddle-dee-dee fantasies in one ensemble. Can’t you just HEAR THE ACETATE? I swear this was inspired by Cinderella’s first dress design. Also, BANGS. AND ALL THE PLASTIC PEARLS IN EXISTENCE. Virgilia just needs a boyfriend with a motorcycle! VIRGILIA has been SO GOOD this entire time. She’s out riding with one of Swayze’s slaves, played by Forest Whitaker, and they get caught in the rain. She tries to talk to him about running away, but he’s all “aw shucks miss I just want to gits you home!” Luckily, she runs into Grady, and within 0.35 seconds concocts a plan to 1. send away Forest Whitaker, 2. stay overnight in a nearby barn with Grady, and 3. shag Grady.

Okay, and now I pontificate for a bit: I am sure there were mixed race couples in the pre-Civil War era, both North and South, and I’m sure that some of them were white women with black men. I would guess they would be amongst the poorer people, but sure, there probably was more than one upper-class white woman who was in love with an enslaved African American or free person of color. However, Virgilia has spent about 3 minutes around this guy before she is all heaving bosoms and parted lips. So, her hotness for this guy totally reeks of White Savior Complex and “I’ll show everyone just how pro-abolition I am!”

Also, I have no idea whether or not she’s sexually experienced, but I feel like for someone of her class level and gender, jumping into bed with someone she’s not married to would be a Big Deal. There is also the issue of the “black stud.” They make a big point of Grady saying that he’s doing this because he wants to, but basically it reads as Virgilia being hot for him simply because he’s a slave, not because of who he is as an individual.

They make a plan for Grady to run away. HOOOR red can only mean one thing, amirite? Glad her spackle survived all that rain. Swazye and George “rescue” Virgilia, she is all thanks, and embracing her new slut status by going red and sparkly black: “I have tasted the forbidden delights of interracial sex, and now I’m alll red, alll the time!” Daw, I do like ivory and black, even if it’s got that acetate sheen! Quick, set your irons to low! So the main issue I have with this number, besides the fact that it doesn’t look 1850s (where are the dropped shoulder seams? wide sleeves?) is it seems like they sewed in a bad attempt at a chemisette and called it good. Also, those sleeve puffs — what, are we in 16th-century Florence here? THE FIT ON PERFECT BLONDE’S BODICE: NOT GOOD. Plastic Cameo is all couch fabric. Northern Mom just looks like my mom, which continues to weird me out. Her name is Inga Swenson, and my mom is partially Danish, so I think that’s why.

Tits arrives at Low Rent Ricardo Montalban’s (her dad) house just in time for him to die. She has a sad, even more so when pops informs her that one of her grandmothers (on mom’s side) was a black slave. The whole bolero-jacket thing is so 1860s, and it’s all VERY slim-fit. Once again, Maum Sally has the most period-appropriate fabric and dress! Also, as another commenter pointed out, points for the tignons (head wrap) which are 1. period and racially appropriate, and 2. done in interesting and attractive ways!

We cut to Philadelphia, and apparently Virgilia has MARRIED Grady. The problem, again, is that it all seems so token-y. I mean, I’m glad there’s finally an African American character with more than two lines, but he’s there to prove just how hardcore Virgilia is, not so that we can understand his experiences and motivations.

Reader Dora H*ckin K. said it perfectly in a comment on my first recap: “As if the Civil War was this tragic misunderstanding between two groups of mostly-nice white Americans — a war in which black people had no role except as an issue.” I’m not saying it’s not valid to tell a story about white people who lived through the Civil War. But this whole production reeks of “EPIC STORY, TELLING BOTH SIDES OF THE CONFLICT” — with a big, gaping side (or more) left out: what about enslaved people’s experiences? What about free people of color’s [FPOC] experiences?

In this scene, a FPOC has come to ask Grady to speak at an abolitionist meeting, which both Grady and Virgilia are furious about, because this guy is yet another of these “don’t bring up violence!” types. Virgilia goes off on some fire and brimstone rant about how this all needs to end in blood and then we’ll string up the wimps like FPOC abolitionist, because fuck them all!

The problem I’ve been having all along with Virgilia’s strident abolitionism is it makes her position seem extremist. Sure, there were people at many points on the spectrum of pro- and anti-slavery. But since she’s the main one to speak for abolition in this series (OK, so Perfect Blonde has her once scene where she asks nicely and politely if she can work for the Underground Railroad), it basically makes abolitionists look like war-mongering assholes. It’s all part of the reductionist bullshit that paints slavery as an institution as not so bad, because hey, nice people like Swayze are slave owners! And really, it’s all about states’ rights, right? GAG VOMIT THROW THINGS Virgilia found her boy-with-motorcycle and, in the process, lost her hot rollers. And corset. Nice modern Talbot’s blouse, too.

Speaking of which … Sweet Blonde is sad, because someone (coughVirgiliacough) sent her family a copy of Uncle Tom’s Cabin, and now she is worried that all Northerners will think Southerners are evil. Because, you know! Supposedly her family is nice to their slaves! So it’s all okay! (Note: I do not think that anyone is inherently evil, except, maybe, Hitler, but even then, complicated situation. However, an institution like slavery is inherently evil and fucked up, and no matter how nice or helpful or whatever someone is, it doesn’t excuse owning people). That shawl started life as a shower curtain, no doubt. Well what do YOU wear to a swamp abortion? Bye Maum Sally! Sorry you turned back up just to be killed!